It is my contention that William Griffin, better known as Eric B.’s rapper, Rakim, a 19-year-old resi­dent of Wyandanch, Long Island, with an interest in Islam, is the deffest rapper around. But before prais­ing Rakim a digression is in order. Too many people who profess to like rap don’t distinguish among its many historic and stylistic differences. Only by placing Ra­kim in context do you appreciate his mastery. Here it is:

The Old School: Either contemporaries of, or originally inspired by, the first hip hopper, D.J. Hollywood, they include Eddie Cheeba, Love Bug Star-ski, Grand­master Caz, and Kurtis Blow. This gener­ation popularized the party clichés­ — “Throw your hands in the air and wave them like you just don’t care” and “Somebody/Everybody/Anybody scream!” With the exception of Blow none of these pioneers made the transi­tion to record, because so much of their style was based on interplay with a live audience. A lot of old-school technique came from glib radio jocks (particularly the early ’70s WWRL crew of Gerry Bled­soe, Gary Byrd, and Hank “The Dixie Drifter” Spann). The only survivor who still has juice is WBLS’s Mr. Magic, whose Rap Attack is a B-boy version of r&b radio.

The Rockers: This approach is defined by bombastic Hollis crew members Run of Run-D.M.C. and L .L. Cool J. Like most good middle-class music makers, these guys traffic in overblown rebellion for the legions who buy attitude as much as mu­sic. Run and L. L. are loud, nervous, kinetic; both sound freshest over minimal­ist rhythms occasionally spiked with guitars. Larger than life, almost cartoons really, they are rappers as arena rock stars.

Velvet Voices: If they were singers, Heavy Dee, Public Enemy’s Chucky D, Who­dini’s Ecstacy, Kool Moe D, Melle Mel, and D.M.C. would be labeled baritones or low tenors. They are authority figures who lecture (Chucky D, Melle Mel), in­struct (D.M.C., Kool Moe D), and seduce (Ecstacy). The heightened masculinity of their timbres can make a limp rhyme hard. The most underrated is Ecstacy, who has the widest emotional range in this crew, and the most promising is Heavy Dee, whose “Mr. Big Stuff” made fat-rap fly again.

Clown Princes: Given the right rhyme any rapper can be funny, but Slick Rick, Dana Dane, and Beastie Boys King Adrock and Mike D. specialize in yucks. Slick and Dane started in the Kangol Crew, an unrecorded rap quartet in which they perfected upper-class British ac­cents, slurred pronunciation, and female impersonations of “The Show” (Slick) and “Nightmares” (Dane) done over tracks rife with references to TV themes and nursery rhymes. They’re amusing in a Redd Foxx-like way, though charges of sexism are well-founded. Same thing can be said of MCA and Adrock, though the laughter usually tempers the cringing. Adrock’s mousey voice is the illest instru­ment in rap.

The Showmen: Biz Markie, with his dance, skull, throat-beatboxability, and goofy glow, must be seen to be appreciat­ed; his Apollo performance of his new single, “Pickin’ Boogers,” was a nose­opener. The wholesome Doug E. Fresh is still more human beatbox than rapper, yet when you combine his rhymes, sound F/X, harmonica, dancing, and Cheshire cat smile, it’s clear Fresh is one of the music’s most versatile live performers. No question, Doug E. Fresh is the Sam­my Davis Jr. of hip hop. Give him anoth­er great record, and he’ll house all these m.f.’s

Cutting Edges: Rather than loud and boastful, these voices are cool, conversa­tional, and threatening. The overrated Schoolly D, the quick-witted King Sun (“Hey Love”), and the vet Spoonie Gee (“Godfather,” a rare comeback) all have casually incisive deliveries. But the real edge, the master rapper of 1987 (damn near ’86), is Rakim, a man qualified to narrate the cassette versions of Donald Goines’s Daddy Cool, Chester Himes’s Real Kool Killers, and the collected works of Iceberg Slim.

Rakim’s intonation itself conjures wintry images of cold-blooded kill­ers, chilly ghetto streets, and steelly eyed hustlers. There’s a knowing re­straint in his voice that injects danger into even harmless phrases. Eric B. and Rakim’s debut single last summer, “Eric B. Is President”/”My Melody,” on Har­lem-based Zakia records, was as stunning a first statement as Run-D.M.C.’s “It’s Like That”/”Sucker M.C.’s.” The groove of “President” was gritty wop fodder while Rakim’s rap (including the sandpa­pery comment “You thought I was a doughnut/You tried to glaze me”) pre­sented his credentials. Better still was “My Melody,” in which, riding over a sleazy rhythm Rakim devastated the mike with a boast equal parts vinegar, bullshit, and Islamic allusions.

I take seven MCs, put them in a line
Add seven more brothers who think they can rhyme
It’ll take seven more before I go for mine
Twenty-one MCs ate up at the same time

On the strength of that 12-inch Rakim was a challenger for the rap king title. Now Paid in Full (4th & B’Way), Rakim and Eric B.’s first album, certifies that Rakim (“Taking no prisoners/Taking no shorts”) uses his deadpan tone and quiet fire to dis the old school, cut the clowns, make the velvets sound velour, and cold rock the rockers. Throughout Paid in Full there are moments when Rakim’s voice and words, complemented by Eric B.’s dictionary of James Brown beats, make mesmerizing hip hop. For example, the opening of “I Know You Got Soul” is an apology, challenge, critique, and invi­tation: “I shouldna left you/Without a strong rhyme to step to/Think of how many weak shows you slept through/ Time’s up! I’m sorry I kept you.”

Paid in Full contains no rock ‘n’ roll or overt comedy cuts. On “I Ain’t No Joke” Rakim slides between long sentences (“I hold the microphone like a grudge”) and terse rhymes (“You’re right to exagger­ate/Dream and imaginate”), a strategy that speeds up and slows down his synco­pation, much like a saxophonist working through a long solo. On “Move the Crowd” the choppy snare drum and funky horn sample inspire Rakim to use short phrases that suggest a rhythm gui­tar. Over the “Don’t Look Any Further” bassline Eric B., establishing once and for all that he’s a DJ and not an MC, intro­duces himself on mike before leaving Ra­kim to talk about money or, as he puts it, wonder “How I can get some dead presi­dents.” Unlike most current rap albums, where all five rap styles appear, Rakim undermines all the distinctions with a sinister vitality. It’s such a strong person­ality that over the course of, say, three albums he may find himself becoming a parody. But for now when he asks, “Who can keep the average dancer hyper as a heart attack?” you know the answer. ■ 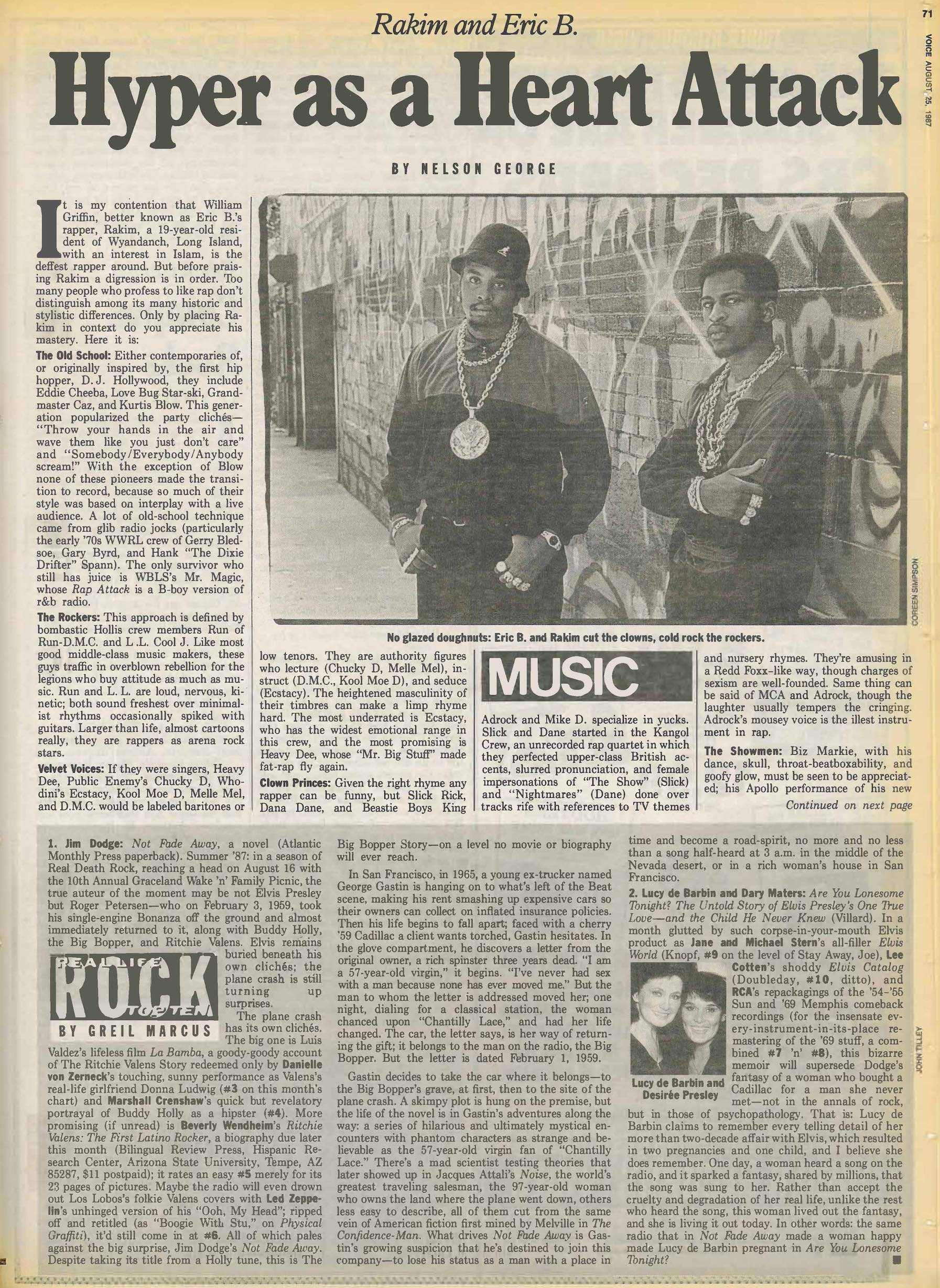