The day after the violent protest over minority hiring at Trump Towers, State Supreme Court Judge Frank Blangiardo granted developer Donald Trump a $50 million tax abatement for the project. One would think the award of so massive a 10-year tax dole to Trump’s Fifth Avenue condominium should give the city more leverage to force affirmative action con­cessions from Trump and his builder, HRH Construction Company. But Mayor Ed Koch, whose black-baiting taunts about the protests got banner headline treatment in the Daily News and Post, has seen to it that city-assisted projects like Trump’s million-dollar-a-condo-casbah for oil sheiks escape even the minimal minority-hiring requirements of the city.

Though tax-abated projects like Trump Towers were explicitly covered by the af­firmative action orders of the Lindsay and Beame administrations, Koch took them out of his executive order, issued in April 1980. Several top Koch advisers urged that he include projects that are granted tax or other city benefits (zoning bonuses and favorable land disposition agreements). But Deputy Mayor Peter Solomon, the current finance chairman of the Koch re­election committee, blocked this recom­mendation on the grounds that minority-­hiring programs “would scare away the business community.”

Solomon’s position was directly counter to a May 1979 report commissioned by then deputy mayor Herb Sturz (the cur­rent City Planning Commission chairman) and written by consultants Stanley Rut­tenberg and Harry Wexler, which con­cluded that these kinds of city-assisted projects were the primary reason the mayor should issue an executive order since projects actually built by the city often receive federal funds and would therefore be covered by federal minority­-hiring requirements. The report also dis­missed Solomon’s objection that af­firmative action might “dampen the con­struction turnabout” — by saying that “this suggestion finds little support among knowledgeable public officials or private contractors.”

The exclusion of city-assisted projects from the mayor’s executive order is one example of the Koch administration’s hostility to any real affirmative action in the construction trades, a position that makes the mayor partly responsible for creating the injustices that led to the vi­olent demonstrations he found so deplorable last week. A catalogue of Koch’s anti-minority actions on construc­tion trade hiring includes:

(1) When the state Court of Appeals struck Beame’s hiring order in 1979, the grounds were that the mayor lacked the authority — without City Council legisla­tion — to issue such an order. The judges emphasized, however, that they were not ruling on “the desirability of adopting a policy of affirmative action in hiring practices and mandating the same.” Their rul­ing was an invitation to the mayor to in­troduce legislation in the council that might have an impact on the industry, which Koch’s own corporation counsel has conceded in city legal briefs has the clearest, court-declared record of race dis­crimination. Though urged to back such a bill by city consultants Ruttenberg and Wexler as well as by some of his own advisers, Koch refused. Indeed, he eventually issued a press release expressing agreement with the court decision in Full­ilove v. Beame and distorting its findings by claiming that the court had found that Beame’s order established illegal quotas.

(2) Instead of legislation, Koch issued Executive Order Number 50, a so-called affirmative action policy which contains no reference to minority workers (they are displaced by the term “economically dis­advantaged persons”), or to goals and timetables. Koch was again unmoved by Ruttenberg and Wexler, who had concluded in their city report: “There is little dispute among persons involved in the construction industry that equal em­ployment opportunity provisions are of no real effect unless contractors are directed to meet prescribed hiring goals and time-tables.”

This punchless order, nonetheless, was allowed to languish for months before Koch signed it. After he signed it, he kept the enforcement agency, the Bureau of Labor Services, so busy preparing another executive order that they have yet to get around to completing and publishing regulations to enforce this one. Doug White, the bureau’s director, says that the regs will be published soon and become effec­tive by the end of September, almost two years after the Fullilove decision. That means there has literally been no city poli­cy — not even this mush — through most of the first four Koch years. The city’s motto seems to be: what can’t be watered down, slow down.

White did issue interim regs in May 1980 (promising final regs that summer), but he concedes that he has no enforce­ment capacity until the final regs go into effect. He could not say whether this emp­ty order had produced a single job on a city construction site 15 months after its issuance. White says he’s hoping to have a report on its effectiveness, also by Septem­ber 30.

(3) Koch has also issued Executive Order Number 53, which is his version of a set-aside program for minority contrac­tors. Once again, no mention of minorities is made in the order, which instead gives a preference to what are called locally based enterprises. That means they’re supposed to be small, located in certain city neigh­borhoods (not necessarily minority ones), and employ at least a quarter economically disadvantaged people. Under this order, such subcontractors are supposed to re­ceive at least 10 per cent of the work on a city job.

The problem is that the regs for this order took until April to surface, nine months after the mayor issued it, and White says only a “minimal” number of firms have even managed to qualify under the program. The program is still in the promotion stage, explains White. In fact, all the mayor seems to have done is throw a mid-campaign cocktail party at Gracie Mansion recently for 300 contractors who might make it into the program.

The NAACP, reacting to these two or­ders, wrote the mayor a year ago: “We note again your refusal to consider the mass of evidence which suggests the conclusion that race and historic circumstances are important causative factors contributing to the economic deprivation of a sizable number of black New Yorkers.” The or­ganization blasted the orders as trumpet­ing the administration’s “retreat from the principle, firmly embraced by the last two of your predecessors, that affirmative ac­tion is a necessary and positive policy to promote the achievement of equal op­portunity for minorities.” Conversely, the Anti-Defamation League of B’nai B’rith wrote to praise Koch’s new, “non­discriminatory” approach precisely be­cause it did not include “preferences for specified groups.”

Council President Carol Bellamy, who does about as badly as Koch in employing minorities on her own staff, nonetheless denounced the mayor’s executive orders and urged him to back legislation with real teeth: “Without such legislation, for the first time in more than 10 years, there will be no City-promulgated employment goals or timetables. I am even more concerned when I see other jurisdictions — Atlanta, Boston, San Francisco, Syracuse, and Buf­falo, for example, adopting their own in­novative minority business programs, in­cluding goals, set-asides, etc.”

These Koch policies have dovetailed with reversals for minority construction workers on a federal and state level. In the same decision that struck Beame’s execu­tive order, the Court of Appeals also wiped out Governor Hugh Carey’s state order. Carey, too, was told he had to go to the legislature. In the most recent session, he did, but the bill died. Carey has now bud­geted his own state enforcement division out of existence.

At a federal level, new Labor Secretary Ray Donovan is a former contractor whose firm achieved a notorious record of non­compliance with the federal affirmative luring regulations he is now charged with enforcing. Even before Reagan took office, however, State Attorney General Bob Abrams had filed suit against the Carter Labor Department for failure to enforce federal regs (the city, by the way, declined to join in this suit). Abrams concluded that only 5 per cent of all people hired for federally contracted or assisted construc­tion in the area came from minority groups, while the guidelines called for 15 to 20 per cent.

In all of Koch’s postdemonstration at­tacks on the minority picketers, there was no reference to the justice of the under­lying cause for the protest. His own admin­istration’s legal brief, filed at the U.S. Su­preme Court in support of a congressional program or minority set-asides and later disavowed by the mayor in comments to The New York Times, states the case well:

“Although we believe that the imposi­tion of a racial quota is a drastic remedy, even a remedy of last resort, in this in­stance it was fully justified. This con­gressional action, long overdue in this in­dustry, should be held entirely lawful.” 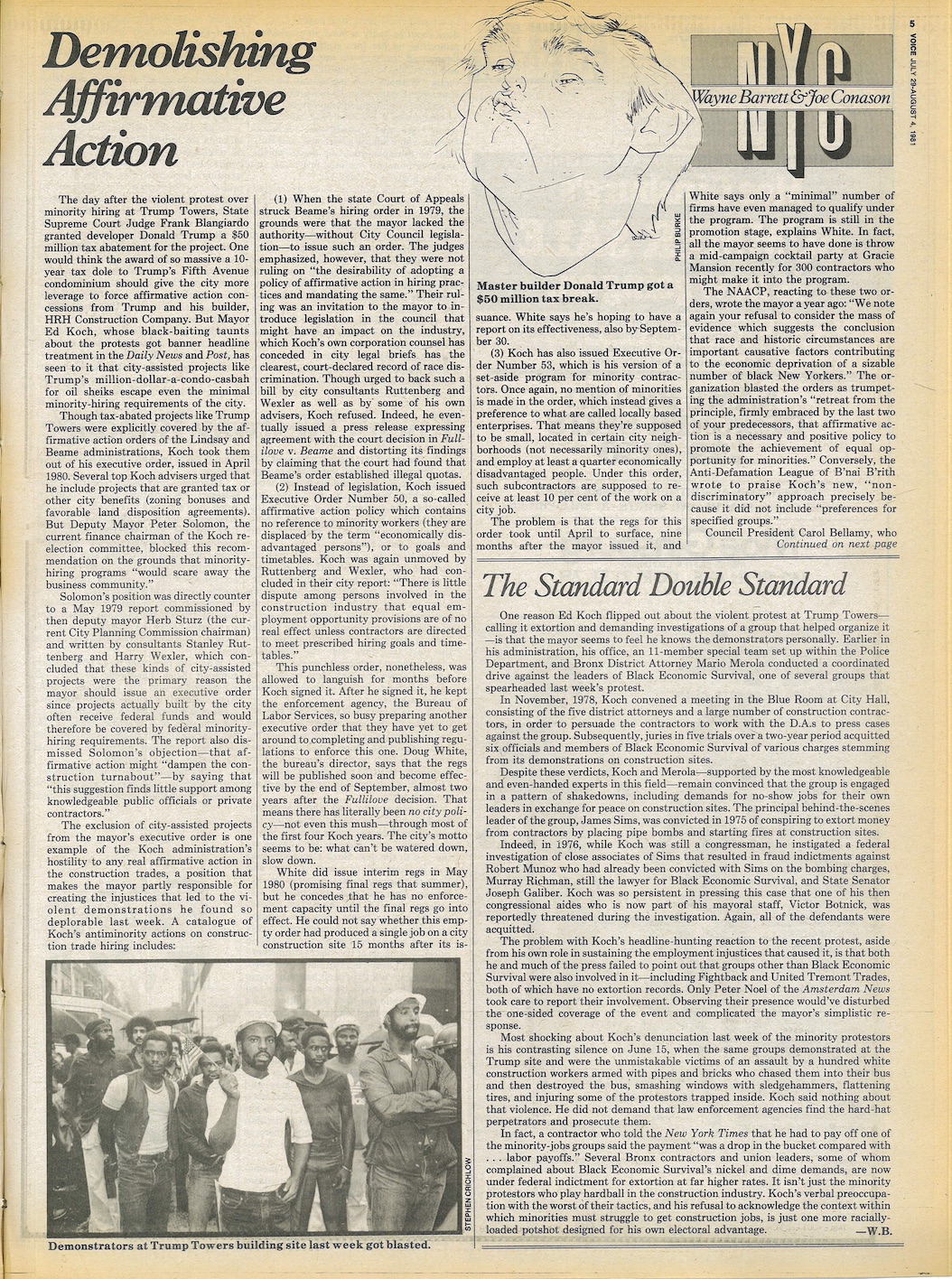 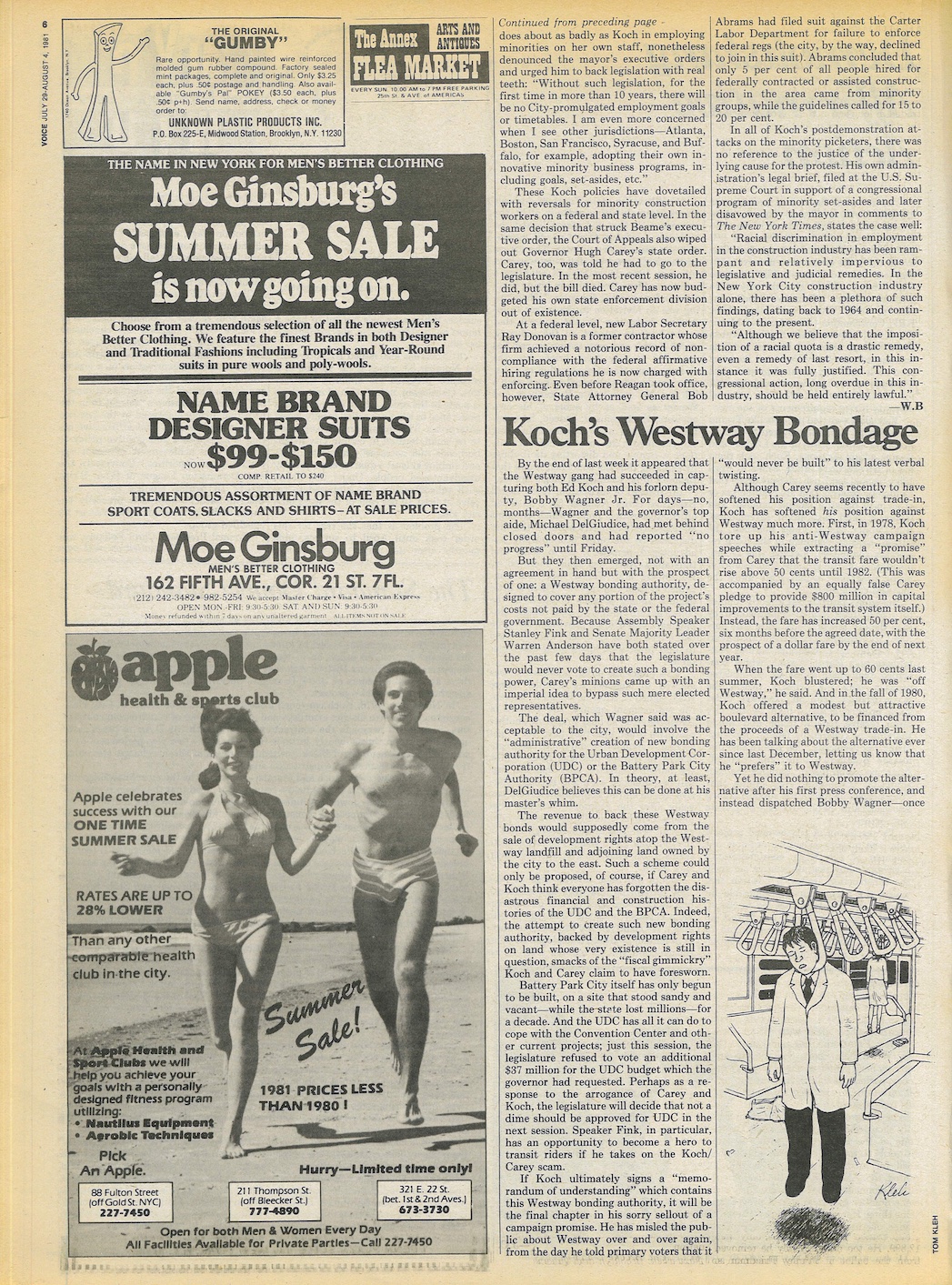