The Ties That Bind: Documents confiscated from Studio 54 reveal some interesting connections

A detailed inventory of all documents seized Decem­ber 14 by federal agents in the Studio 54 raid reveals ties between the disco’s owners and alleged organized-­crime figures.

Contrary to disco attorney Roy Cohn’s claim that all the IRS Organized Crime Strike Force found was  “… an appointment book and a list of parties coming up at Studio 54,” agents confiscated materials linking owners Ian Schrager and Steve Rubell to Sam Jacob­son, the alleged Queens-Williamsburg loan-shark king and racketeer.

Rumors of Studio 54’s link with organized-crime figures began when it became known that Ian Schrag­er’s father was the late Louis Schrager, also known as ”Max the Jew,” the legendary chief of Williamsburg loan-shark and racketeer operations. Louis Schrager was described in the State Liquor Authority file on Stu­dio 54 as “… a convicted felon who was a known as­sociate of Meyer Lansky and was second only to Her­man Siegel in Lansky’s loansharking and numbers rackets.”

Meyer Lansky, the mob’s financial wiz and a key figure in the development of Las Vegas, turned gangsters into “businessmen,” fun­neling much of the mob’s activities into the high-profit, cash-laundering businesses of entertainment, night clubs, and resorts.

The late Louis Schrager left a large estate and trust for his wife Blanche and son Ian consisting of various businesses and real estate. According to State Liquor Authority files, the late Schrager’s alleged Queens-Wil­liamsburg criminal activities were taken over by the Jacobson brothers, Sam, Dan, and Ralph.

Ralph Jacobson was convicted on income­-tax charges and extortion in 1975. Ralph and Dan were both indicted in 1972 for the mur­der of Queens nightclub owner Conrad Greaves, in an alleged loan sharking and ex­tortion con. They were never convicted. Also indicted for the murder were Tommy DiLeo and Pasquale Macchairole (Patti Mac), whose bodies were found recently in plastic bags in the trunks of their cars. Sam was indicted but not convicted of tax fraud in 1972.

When Studio 54 applied for a liquor li­cense in the spring of 1977, the SLA inves­tigator asked Ian Schrager about his relation­ship with Sam Jacobson. The investigator’s sources indicated that Jacobson not only took over the late Louis Schrager’s business but moved in with Schrager’s widow, thus be­coming Ian Schrager’s surrogate father. Ian Schrager, in a sworn statement to the SLA, denied any connection with Sam Jacobson, stating that while he knew Jacobson, he hadn’t seen him in many years, that he had “… no contact with him and have no per­sonal knowledge whatsoever about him or his activities.”

However, the IRS inventory, a matter of public record now filed at the U.S. Court Clerk’s office, appears to show that Sam Jacobson managed aspects of the Louis Schrag­er estate. The evidence includes two letters concerning Schrager estate matters labeled “441,” addressed to Sam Jacobson and dated May 8, 1970, and March 13, 1970. Also found in the raid was a brown accordion fold­er marked SAM JACOBSON-PERSONAL. That file contained, among other things, one letter dated May 5, 1974, a promissory note dated March 12, 1975, a number of legal pads marked SAM, and a financial statement dated March 17, 1975.

The most damaging document that may indicate that Sam Jacobson had an undis­closed financial interest in Studio 54 is a five­ column payment sheet with the main head-ing, STEVE RUBELL—SAM JACOBSON. The first of 11 entries reads, “W/E [week ending] 6/25, $2500.” The final entry reads “$22,500.” More information will certainly come out as the IRS develops its case.

Unlike the State Liquor Authority, the IRS has muscle. And while the State Liquor Authority was on the right track in question­ing Schrager about the source of his funding, the agency failed to produce a strong case be­cause the co-owners balked at supplying requested financial records. The agency report states that some of the checks Studio 54 did present as evidence “… never cleared a bank, bearing no imprint on the front or back.”

Roy Cohn also claimed that the search war­rant, obtained by the strike force on Decem­ber 12 from U.S. District Judge Robert Carter, was based on “a phony tip.” Who sup­plied the information that justified the search warrant? That fact is currently “sealed” by the courts, even from Cohn. Studio 54’s law­yers are challenging the order and demand­ing that the material be unnealed. (If it is un­sealed, the basis for the search might be chal­lenged, if and only if the information was in­deed “phony.”)

Meanwhile, Studio 54 is taking the matter very seriously, having hired two additional law firms to represent them. Caplin and Drysdale, a high-powered, Washington­-based firm, will represent Studio 54 in the matter of possible tax fraud. “We will be representing the corporation only,” says Caplin. “As individuals, the co-owners are represented by Paul, Weiss.” Mortimer Cap­lin was the IRS commissioner from 1961 to 1964 and is one of the nation’s best tax law­yers. The second firm, Paul, Weiss, Rifkind, Wharton and Garrison, is highly respected in New York. Both these firms will have to ex­plain how it was that, according to the books, Studio 54 lost money at certain times, as its owners have sworn to the State Liquor Au­thority. They will also have to explain countless weekly cash payout envelopes. According to one key former Studio 54 employee and other sources, Studio 54 was not just skimming a few bucks here and there; they were walking off with from 50 to 70 per cent of the cash take. That’s millions.

Roy Cohn will be representing Ian Schrager in Schrager’s more immediate criminal complaint: “intent to distribute a Schedule II narcotic … cocaine.” While Peter Sudler, the assistant U.S. Attorney in charge of the case against Studio 54, refused to comment any aspect of the case, his complaint states that Schrager walked into Studio 54 on De­cember 14 at 9:30 a.m. just after the federal agents had arrived. Schrager was carrying books, records, and other documents. After the agents identified themselves, Schrager placed these materials on the floor. On top of the pile an agent found a white envelope with five packets of what turned out to be unusu­ally high-quality cocaine — about 50 per cent pure, unlike common street cocaine that is usually only 10 to 20 per cent pure.

Schrager’s indictment on the narcotics charge will be handed down in a few weeks and his trial must follow within 90 days. The charges could mean up to 15 years if Schrager is convicted.

While 300 Quaaludes were found in the Studio 54 safe, it is unlikely that criminal charges will result because of the difficulty in proving individual possession,

How will all this affect Studio 54? For the time being, it won’t. There are two agencies that license liquor-serving discos, the State Liquor Authority and the Department of Consumer Affairs.

Consumer Affairs is short staffed and al­most powerless in this area. Studio 54 has been operating without a cabaret license since August 28. All Consumer Affairs can do is send one of its three investigators charged with enforcing the cabaret laws for all of New York City to Studio 54 and slap them with a summons. The fine is usually $25 — a parking ticket can cost more — and the summons can be challenged in court and dragged out for years. Reno Sweeney, the 13th Street caba­ret, has never been licensed due to its resi­dentially zoned area. Despite this fact, Re­no’s has remained open for years. There is no reason that Studio 54 can’t do the same.

Consumer Affairs Commissioner Bruce Ratner doesn’t think he should be in the dis­co-licensing business. “Ask me about TVs or unit pricing,” he said. “That’s where we can and should put our energies. Don’t expect us to keep organized crime out of New York night life!”

The State Liquor Authority has a wait­-and-see attitude. “We have nothing to do with the IRS case or the narcotics charge,” says Commissioner Lawrence Gedda. “And until there’s some resolution of the allega­tions, Studio 54’s status will remain the same.”

In fact, the State Liquor Authority tried to fight Studio 54 once before and lost. Accord­ing to a key SLA source, that attempt to deny the club a liquor license was a joke. Michael Roth, the head of the agency at the time, had political aspirations (he recently lost his bid for election as the state attorney general). Roth was at a party near Studio 54 when he heard that the disco was serving liquor with­out a license. Instead of sending in SLA in­vestigators night after night for a few weeks to establish continuous illegal sale of liquor, Roth stormed out of the party and raided 54 in grandstand style. The SLA’s case was therefore based on only one night of illegal sales — a minor charge. For this kind of ac­tion, Roth earned the nickname within the agency of “Mickey Mouse.”

Even if Schrager is convicted, Studio 54 will no doubt be able to get around the State Liquor Authority. While it is illegal to have a convicted felon as the owner or co-owner of a licensed premise, Studio 54 can reincorpo­rate, dropping Schrager as a co-owner. That’s just a little paperwork. Then Schrager might be legally hired as a manager or consultant and paid whatever salary the “new” corporation feels he’s worth.

Studio 54 will remain the playground of the chic for now, pulling in $12 a head at the door, $3 a drink, and making lots of money  on private parties. The crowds will continue circling the door clamoring for admission. But the documented inventory of the IRS raid indicates that long after the chic set has moved on to a new watering hole, Rubell and Schrager will be busy with their battery of lawyers. ♦ 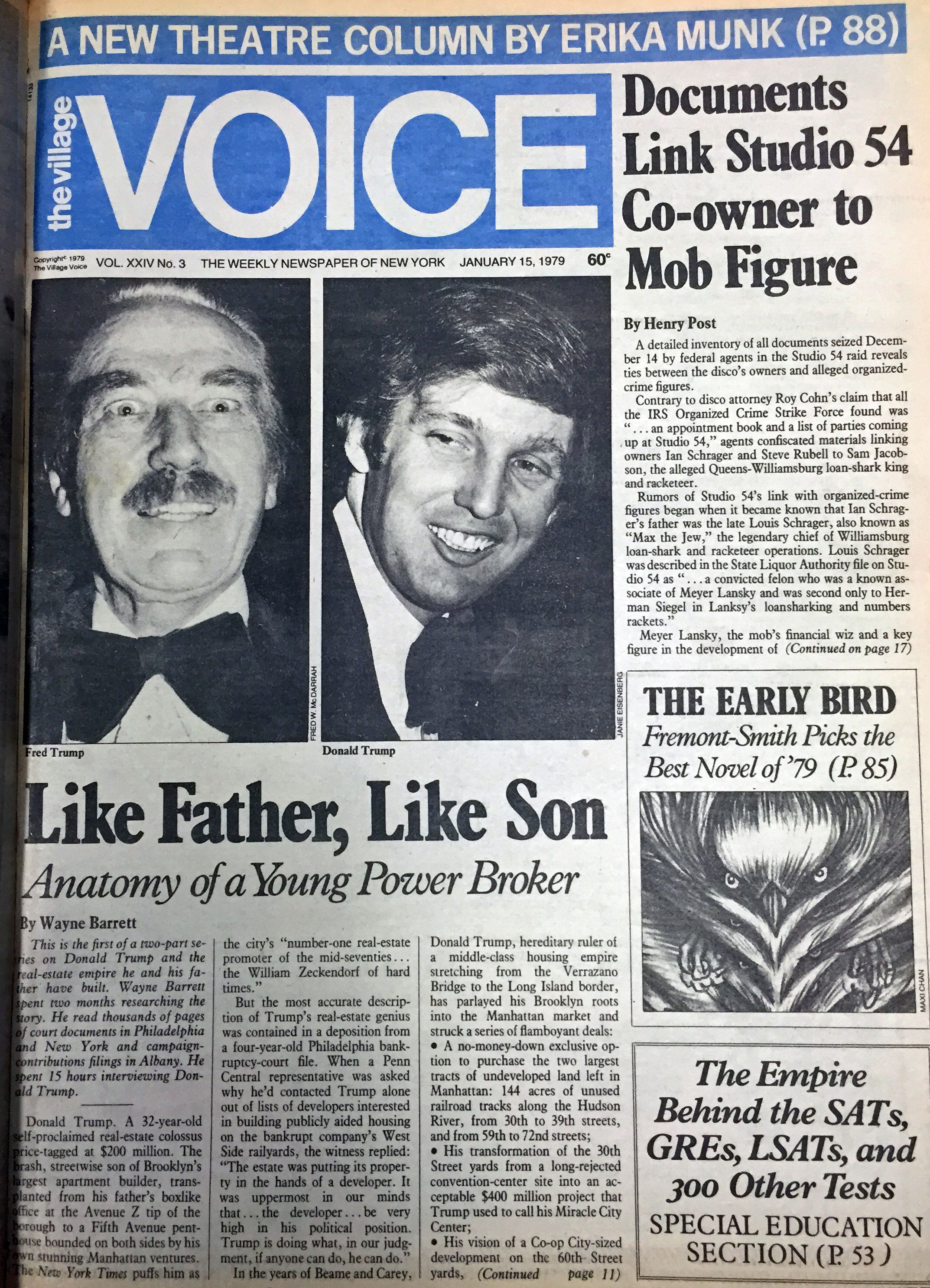 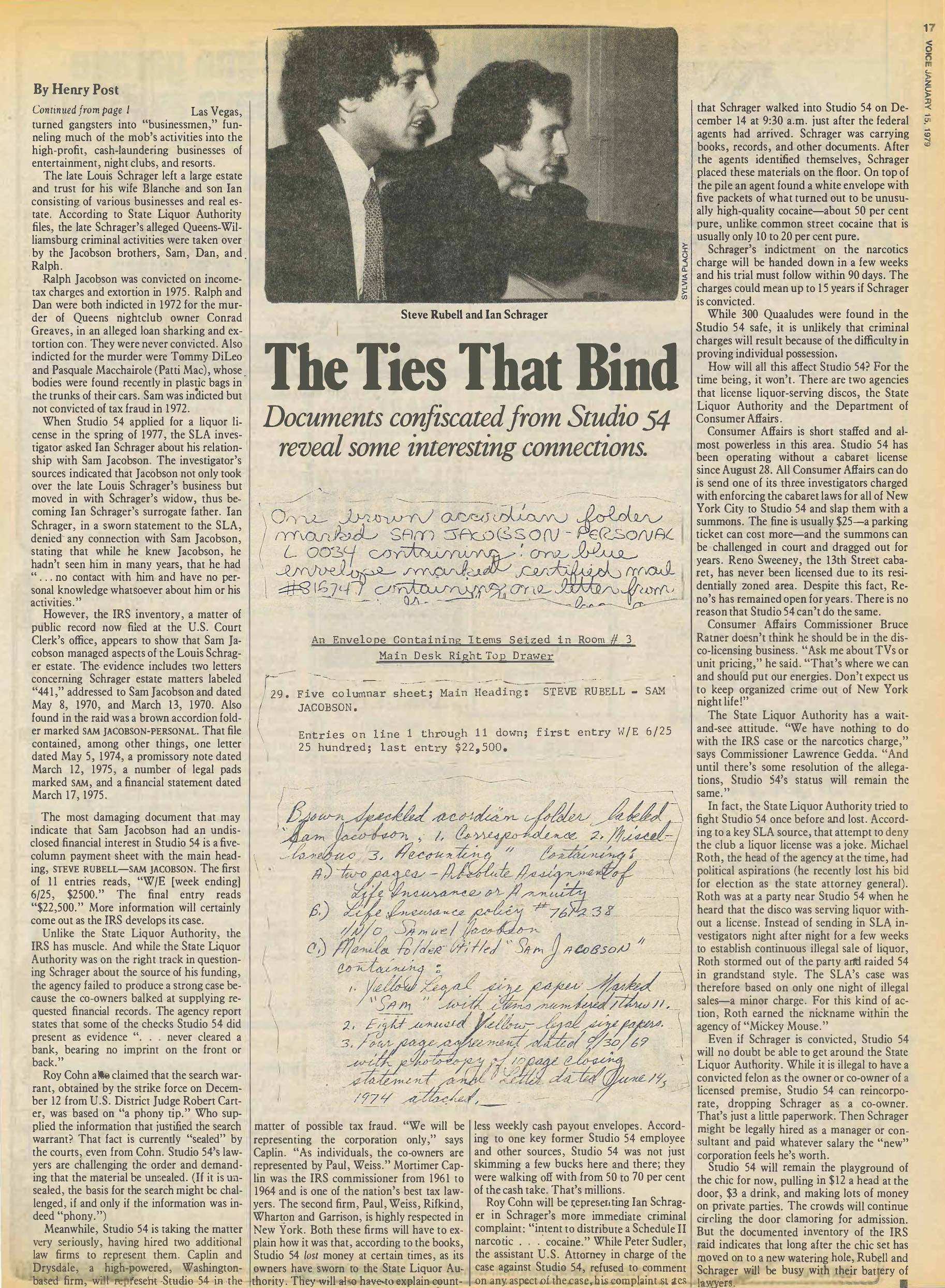