LIBERTY, MISSISSIPPI — In the mythology of the Movement, Amite County is synonymous with the Ninth Circle of Hell.

It was to this impoverished, re­mote area of southwest Missis­sippi, on the border of Louisiana, that Bob Parris (Bob Moses) came in August of 1961 to at­tempt SNCC’s first voter regis­tration campaign. Beaten twice and jailed three times, Parris left for Jackson four months later.

It was in Amite County that Herbert Lee, a 52-year-old father of nine, was shot to death on September 25, 1961, by a member of the Mississippi state legisla­ture, E. H. Hurst. Lee had been one of the few local Negroes to attend Farris’s voter-registration school.

It was in Amite County that Louis Allen, a witness to Lee’s slaying, was shotgunned to death in his home on January 31, 1964, after he had made contact with the Justice Department. Amite County Sheriff Daniel Jones, six-­foot-five, is the son of Brian Jones, who reportedly leads the Klan in the area.

Amite County is rural, red-­clay country outside the flow of history — but not just in terms of civil rights. It has missed the in­dustrial revolution as well. Amite is only 80 miles south of Miss­issippi’s capital, Jackson. Its county seat is called — for some reason buried in history — Liber­ty, population 650.

Great numbers of teen-aged Negroes escape to Baton Rouge and Chicago each year because of the unyielding poverty of the county. Experts estimate that the out-migration from Mississ­ippi, in general, has been four Negroes in ten.

Many Negroes in primitive Amite own their own farms, which makes them less vulnerable to economic reprisal by whites than their urban brothers.

This independence, however, probably accounts, at least in part, for the extraordinary record of physical violence in the county.

Most of the Negro farms are marginal enterprises. Attendance at the all-Negro Central High School during November dropped to 50 per cent because so many children were needed to chop cane and pick cotton on the farms. There is only one brick Negro home in the whole county and that one was financed by an FHA loan. More than 90 per cent of the Negro homes have no in­door toilet. Fewer than one in five have telephones. Almost all depend on wells, dug by hand, for water. Food must be pur­chased in Liberty, where Negroes can still be beaten up at random in the street, sometimes by other Negroes paid to do the deed. No white man has ever gone on trial in Amite County for violence against a Negro.

A week in Amite is a bruising experience. Negroes lie to civil­-rights workers and invent ail­ments rather than face the reg­istrar in Liberty. A meeting in a wooden shack called a church approaches Gandhian “agape” with the singing of hymns and preachments of love thy enemy. A 60-year-old farmer tells how his cousin was castrated in 1962 and asks whether there is “any place on earth where colored folks are treated meaner than in Amite County.”

The Movement in Amite, aborted in 1961 by the killing of Lee and the repeated jailing of Parris, was resurrected 11 months ago. At that time, 22-year-old Marshall Gans, a rabbi’s son from California, came to live on the farm of E. W. Step­toe. At the point he began can­vassing the community there was only one registered Negro in the whole county. The man, notorious in the area for being an Uncle Tom, was actually escorted to the courthouse by E. H. Hurst, the man responsible for Lee’s death.

Steptoe, 56, with a face tramp­led by time, is a legendary fig­ure in the county. He first tried to register in 1953. In 1954 he founded a local chapter of NAACP, but saw its first meet­ing broken up by the Klan and the county sheriff with a gun. In 1964 Steptoe was the only Negro in the county willing to shelter white volunteers. Now he is on the SNCC staff.

There have been no flashy Freedom Days in Amite. No dra­matic marches on the  courthouse. No inspirational rallies with big names. Martin Luther King, Roy Wilkins, and James Farmer have never set foot in this isolated community. There have just been long hot days dur­ing which a couple of  SNCC workers and a couple of local Negroes walked the gravel roads talking with terrified, barely literate Negroes.

In June of this year Carol Ro­goff of Brooklyn and Hazel Lee of Panola County, Mississippi, joined Gans and Steptoe in the tedious, repetitive drudgery of organizing. Finally, on June 14, 1965, 22 Negroes went to the courthouse and were registered.

By November several hundred Negroes had their names put down on the registry books, but that was the high point. The rest are still frightened, and only fed­eral registrars can induce them to risk the fate of Herbert Lee.

Fear and Love. These are the polarities on which the embry­onic movement in Amite rests. In most other parts of Missis­sippi the civil-rights movement is in disarray. Activists who have been in the state for a year or more are burned out.

On the other hand, the govern­ment’s million-dollar Headstart program is siphoning off young militants who might otherwise have become the Movement’s second generation. The newly formed, integrated, and moderate Mississippi Democratic Council is challenging the radical prophets of the Mississippi Free­dom Democratic Party for the tiny Negro vote. Many of the best SNCC organizers have moved on to Alabama’s black-­belt counties.

Mississippi is no longer a bloody frontier. Bureaucracy is making the rigors of saintliness obsolete.

Amite County is even a generation behind cities like Jackson and Greenville. Eleven years af­ter the Supreme Court decision, not a single Negro in the county attends an integrated school. Seventeen months after the sign­ing of the 1964 civil rights act, not a single public accommoda­tion is desegregated. Three months after signing of the 1965 voting-rights bill, no federal regis­trar has yet appeared in Amite County (Goldwater took 93 per cent of the vote in 1964).

The Movement in Amite is in an earlier period than anywhere else in the country. It is pure and religious, uncontaminated by organizational in-fighting and hy­per-militancy. It is just two soli­tary organizers and a handful of local Negroes. The constituency is farmers, who have the special dignity of people who work a meager soil.

But there is also deeply rooted fear and submissiveness.

Five murders of Negroes, including Lee and Allen, since 1961 remain unsolved and unin­vestigated. A few months ago, for the first time in history, a local Negro dared to file a charge against a white who beat him up on the street in Liberty. The charge was thrown out of court.

“Negroes feel,” said Carol Rogoff, “that the courthouse in Liberty is owned by white folks. They remember how Lee was shot right next to the court­house.” She admits that many Negroes remain afraid to be seen with her in public. Even the most rebellious local Negroes think a demonstration in Liberty must wait for another age.

An incident that happened in Amite dramatized the total vulnerability of Negroes to random violence. Four of us — Miss Rogoff, Miss Lee, a local woman named Juanita Griffin, and myself — were putting up posters for the Agricultural Stabilization and Conservation Service election. A man in a pick-up truck without a license saw us and began to chase us in his truck by driving up a narrow gravel road. The driver let out a woman, a child, and a Negro who were riding with him. He made three passes; the last time, driving at us head on, he forced us into a ditch. Cursing, he followed us until we reached the main road.

The following day we spoke to the FBI, who claimed “no Jurisdiction.” “File a complaint with Sheriff Jones,” the agent said. The Negro riding with the driver would not talk to us, and cer­tainly not with the FBI.

Yet, the fledgling movement here is characterized by a kind of love. Most Negroes in Amite are deeply religious. Meetings are usually held in churches. There is no tradition of freedom singing. Instead, meetings are begun with Baptist hymns like “Jesus, Hold My Hand While I Run This Race” and “Lord, Come By Here.” Nobody knows “We Shall Overcome.”

I attended four meetings dur­ing a week here. The first was held in the Mount Pilgrim Church on Steptoe’s land. It was here that Parris conducted his voter-registration classes in 1961. Herbert Lee is buried in the churchyard and his 15-year-old son was among the 75 people who filled the 10 wooden benches.

Reverend Curtis Dawson, who first tried to register in 1961, spoke to the meeting.

“We must love everyone,” he began, as amens welled up from the benches.

“White people from the North care more about us than we care about ourselves.”

“They do everything for us. They go farther with us than we go with ourselves, but we have to redish (register) for ourselves. We can do that for them.”

At another meeting the Rev­erend explained the right to vote in a Biblical analogy.

“God told Moses,” he began, “to pick up a stick. But Moses said it was a snake. But the Lord insisted he pick it up, and when Moses did, it turned out to be a sword. And that’s how go­ing to the courthouse in Liberty seems. Right now it looks like picking up a snake, but once you pick it up, it will becomes the sword of freedom.”

Unfortunately, most of the Negroes of Amite do not have the inner certainty of Moses. Until the federal government con­vinces them that going to regis­ter is not like picking up a snake, Amite Negroes will not register in numbers large enough to di­lute the terror, much less alter their condition. 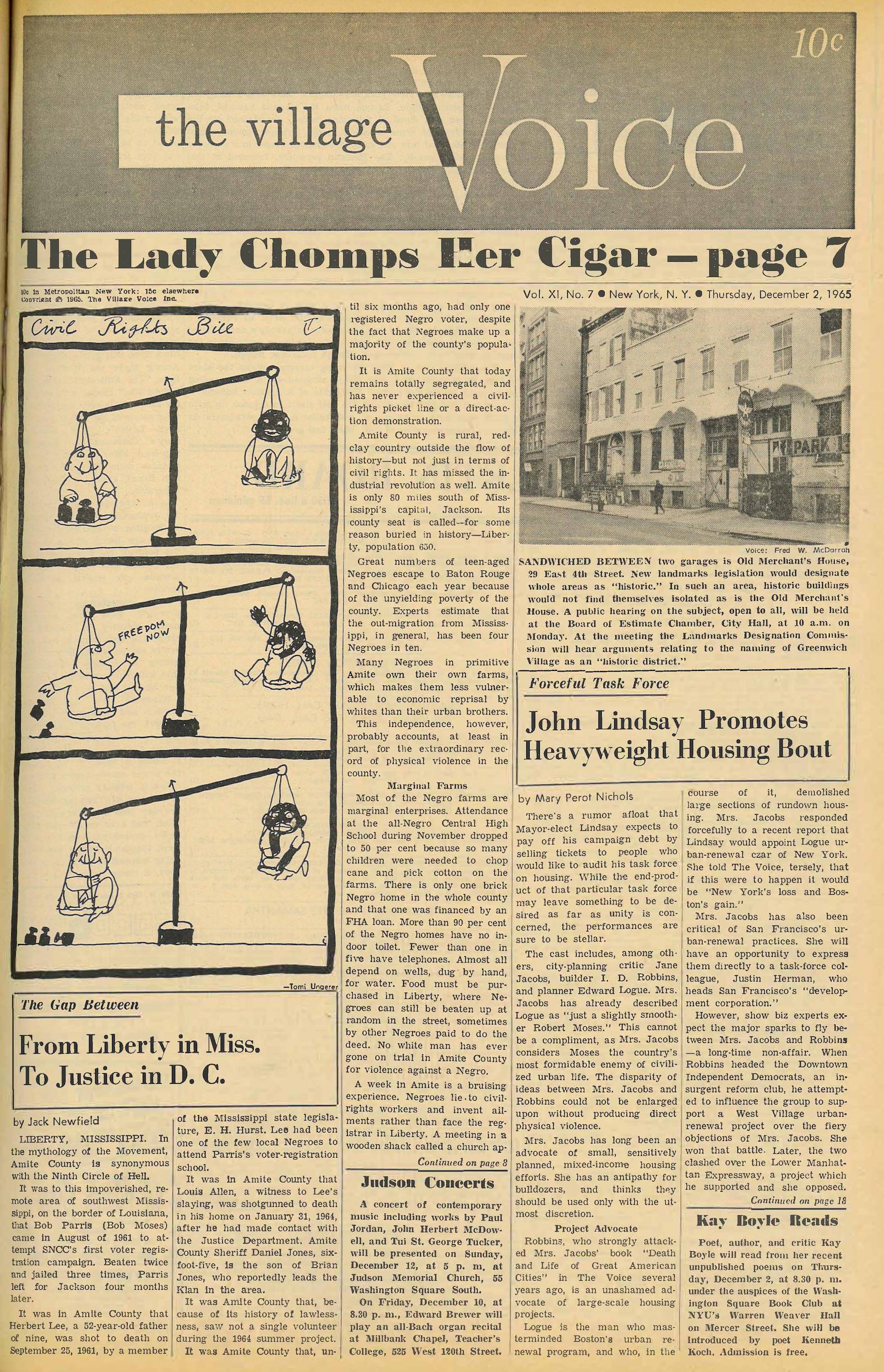 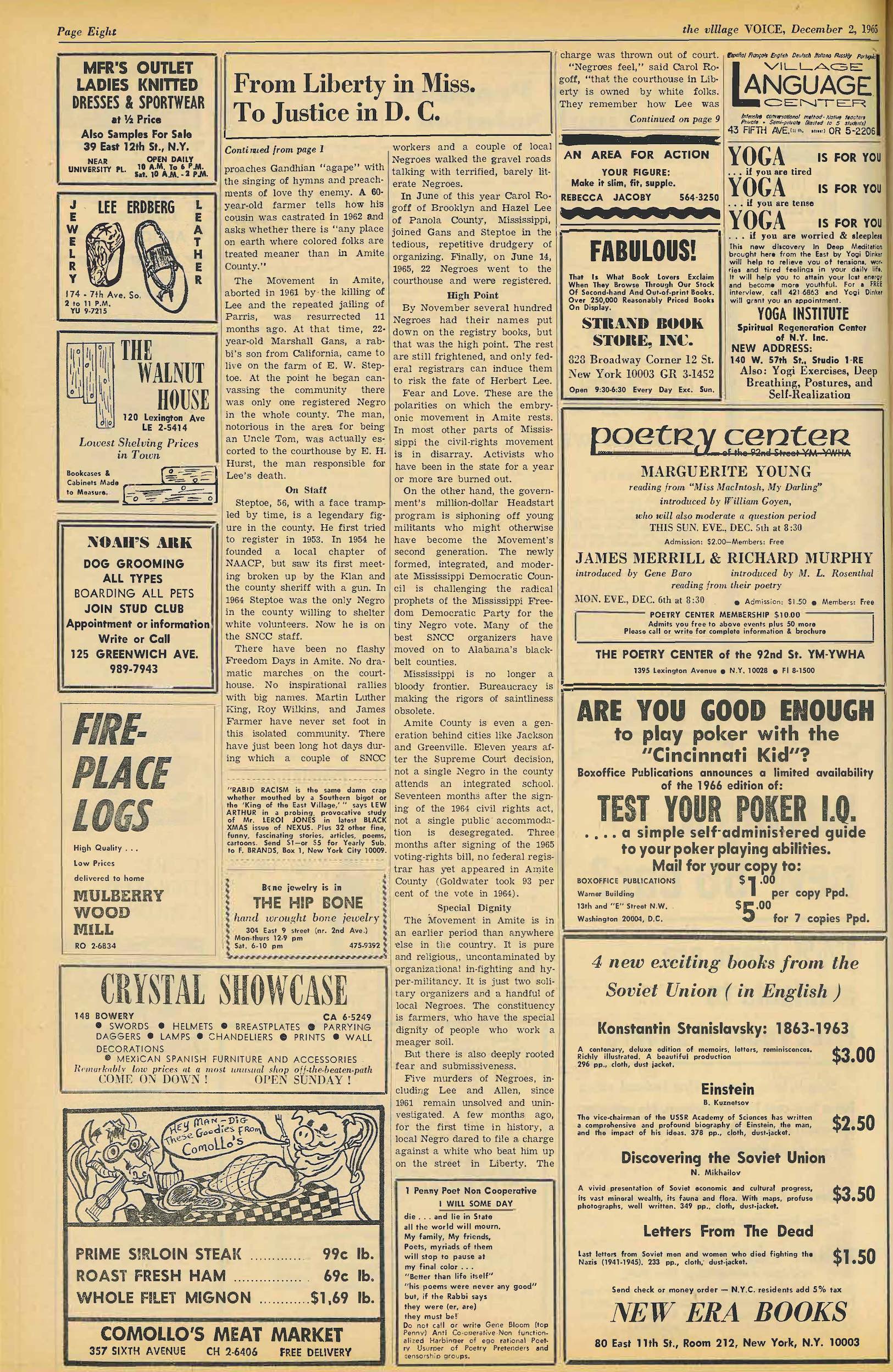 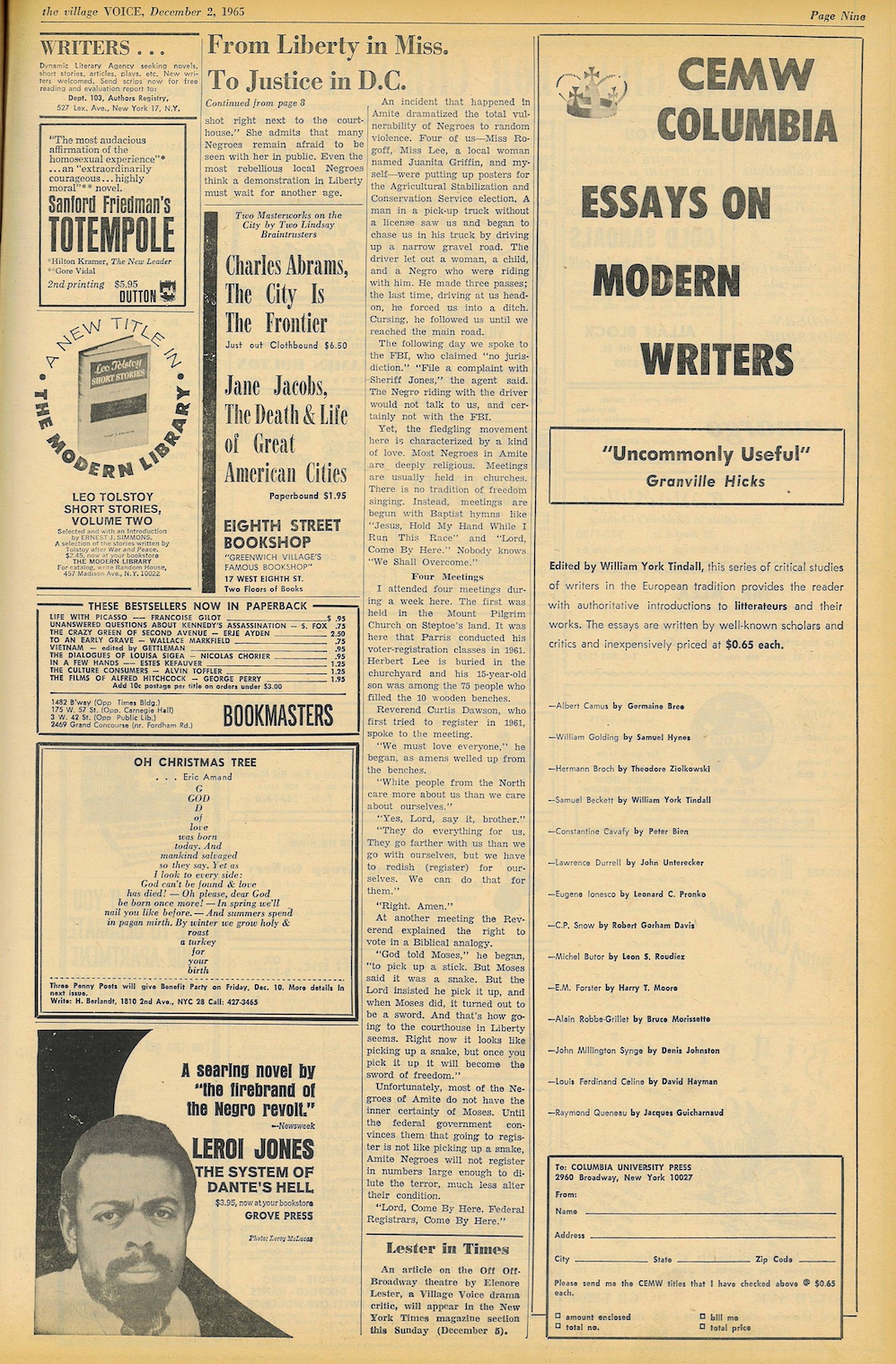