The cake was a two-foot version of his face. The confectionary eyes were clear of the bloodshot coarseness that normally colors them, but the small, balding head still had the shape of a bullet. His jaw was locked in a smile — the frosting face of a birthday boy. To mark 52 years of infamy, Roy Cohn gave himself a party Friday night at Studio 54, and invited 200 friends and clients. There wasn’t a striking schoolbus driver among them, though the guys threatening hand­icapped kids with icepicks last week are col­lectively Cohn clients. Not a single black went to the dinner; nor did any of the guests arrive in station wagons or sedans. For three hours, while we stood in the rain watching and asking for names, the guests arrived in limo after limo.

Each guest had received a telegram and was ordered to bring it. The first 200 were on the “A” list, asked to arrive at 8:30 p.m. for drinks and food. A few hundred more got “B” list telegrams which entitled them to post-dinner partying at 11. The time on your telegram was a measure of your importance to the man who symbolizes evil to many in this city — the redbaiter turned Mafia broker, indicted three times, reprimanded in half a dozen courts around the country for uneth­ical tactics like tricking a senile, dying 84-year-old client into changing his will to make Cohn executor. But his own most successful client in the end, he’s been convicted of noth­ing. Roy Cohn is now New York’s incandes­cent legal star — the choice of its crassest deal­ers (in all wares), the strategist for a new Tammany in Manhattan, already the shadow boss of the Bronx. In short, a one-man scan­dal show staged daily.

A Board of Estimate quorum was on hand — with Deputy Mayor Herman Badillo and borough presidents Donald Manes (Queens) and Howard Golden (Brooklyn) ar­riving in city-owned limos, and Andrew Stein (Manhattan) pulling up in a cab. (After Manes went in, his city civil-service driver joined us on the curb. When someone said what a great guy Manes was, the driver de­clared: “He’s a scumbag,” then turned to me and added, “You can quote me on that. He dragged me outta my house on a Friday night to drive him to a place like this. He coulda driven himself.”)

The crowd from my recent Voice series was there: 32-year-old developer of the Com­modore Hotel and the convention center Donald Trump; his aide and the governor’s chief fund-raiser, Louise Sunshine; and attorney Tom Baer, whose firm is handling both the Commodore and the convention center for the state’s Urban Development Corp. It was the first time I’d seen Trump since the series began. When he recognized me, he pumped my hand and said three times he was doing fine.

For color, Cohn had Andy Warhol, steam­-pressed face and body tied together by a tux, and comedian Joey Adams, who emceed. Judge Edelstein and columnist Safire made the speeches.

Studio 54 bouncers and doormen tried to claim the sidewalk as an appendage to the disco and force the Voice photographer and myself into the street (where one limo driver ran into me from behind). I spent the night jockeying for position, trying to get people to identify themselves: Some leapt from their cars and ran full speed into the place to avoid questions or pictures; some lingered to spell out their names; some thought I was with the disco and mistook my pad for a guest list, coughing up their names to get in. We never saw the host, though we had both entrances covered. They slipped him past us through some secret passage.

The 54 doormen also saw to it that no one with 11 p.m. telegrams tried to crash the din­ner. People with late invites were told to go away and come back when their invite said they could come. One frustrated early arriv­al — the only black we saw all night — was Bill Todd, whom Joe Conason described in the Voice as a Friedman political operative who was dismissed from the Manhattan borough president’s payroll when he was exposed as a welfare cheat. Todd came in a shirt that blinked on and off. Not even that could get him in until 11 p.m.

Badillo and the rest of the respectable crowd didn’t seem to mind that the disco seems to attract federal agents, or the coke indictment of its co-owner and Cohn client, Ian Schrager. One insider explained Badil­lo’s surprise attendance to me this way: “Cohn and Herman got friendly when Badil­lo agreed t0 support Stanley Friedman for Bronx county leader. Since then, Cohn took Herman around the circuit and introducd him to a lot of money people when it looked like Badillo was going to make a run for city comptroller.” Badillo confirmed much of this, except he said that he already knew the people Cohn introduced him to and added that he and Cohn/Friedman are now at odds over the Bronx borough presidency. Badillo explained his use of a city car and driver by saying that “in a sense” Cohn’s party “was official city business” because of the people he “came into contact with there.”

The joke of the night was Howard Gold­en’s presentation to Cohn of a Voice subscrip­tion. Cohn showed it around to people. The only class moment of the night. ■ 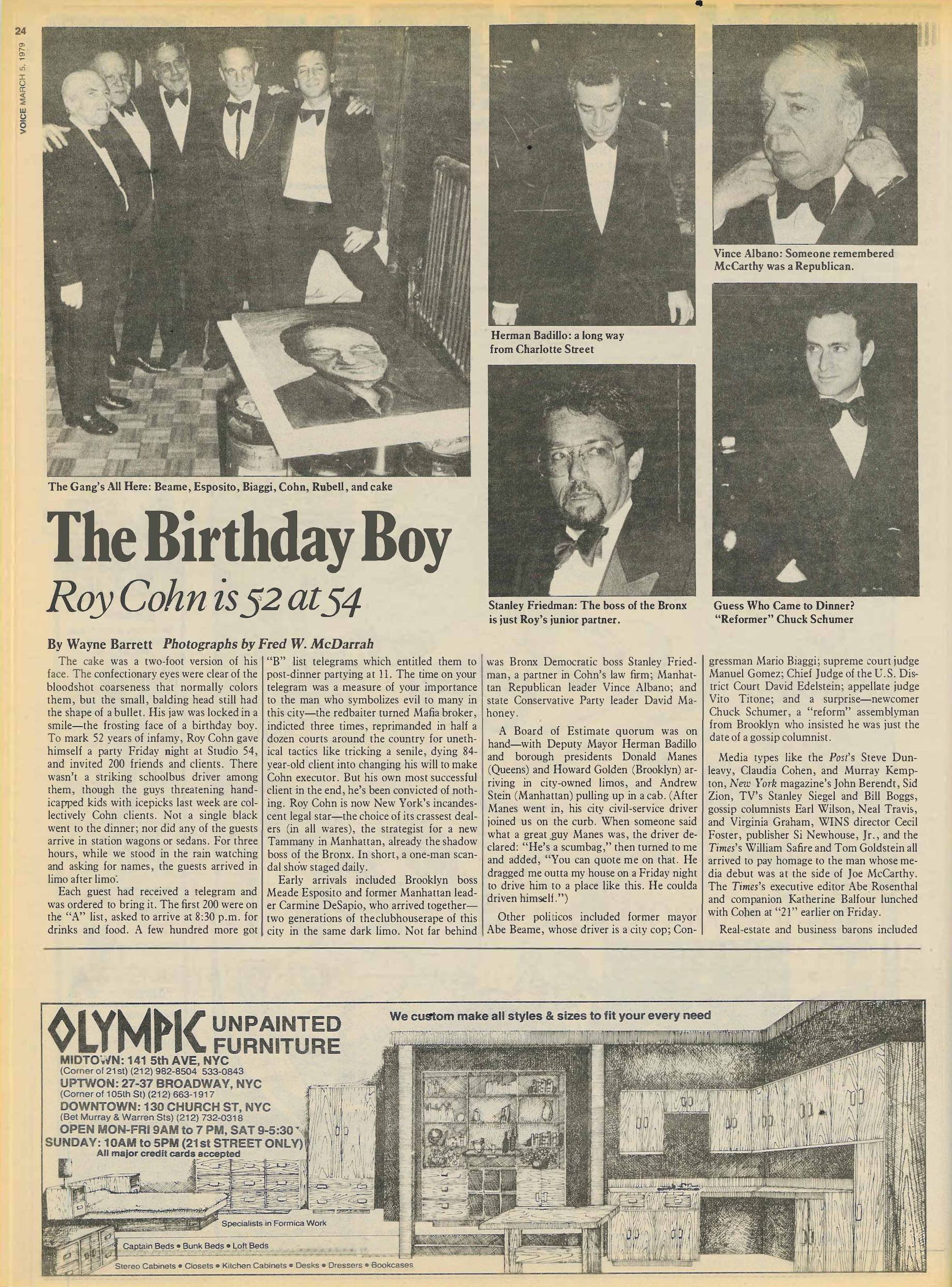 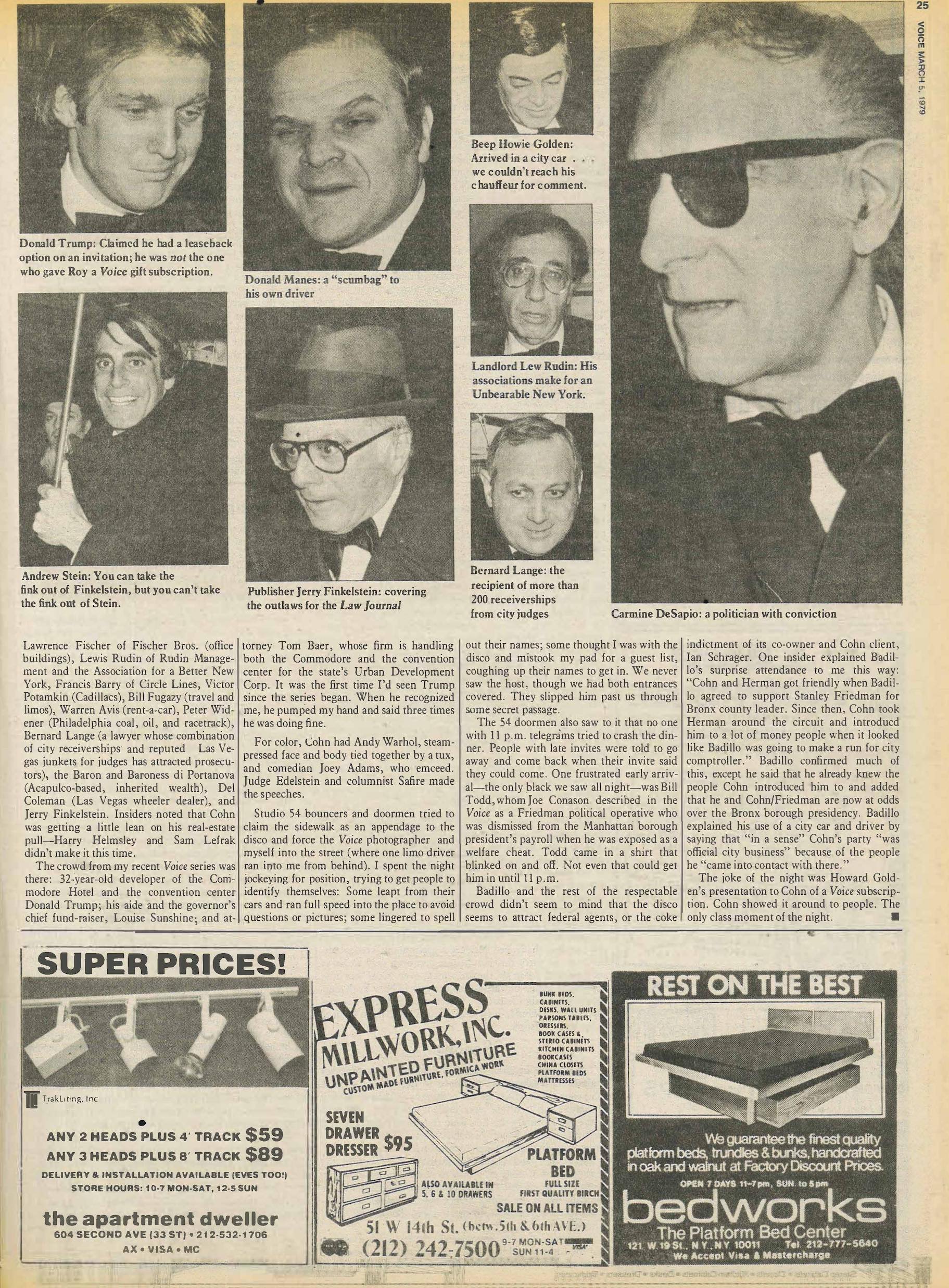