I go through life’s little traumas. My book isn’t in Brentano’s window, so I get de­pressed. A playwright I met in San Francisco uses me, but can’t stay the night. Copy is cut, so that the original point of my story is lost. I don’t know whether or not to tell someone I love that I love him. Then Guyana happens. Then Moscone and Harvey Milk are assas­sinated. Then the gay-rights bill fails again at City Council. And everything that’s big seems inconsequential. I go to glamorous parties and wonder why I’m there. I taxi to a screening of The Deer Hunter and walk out when a deer is shot. I make a fish stew and can’t eat it. The avocado I bought last week is rotting in the fruit bowl. This month life is frightening, and death too real. Here are some thoughts on gay rights, politics, and life.

There was yet another City Council hear­ing November 29. The idea this time was to get the full council to decide whether it should vote as a body on Intro 384, the bill which would legally protect gays from being discriminated against in employment, public accommodations, and housing. On Novem­ber 8, Intro 384 lost in the General Welfare Committee by a vote of 6 to 3.

Little advance notice of the hearing had been given. The night before, the Daily News ran a short story in which gay lobbyist Allen Roskoff stated that he was certain of 18 discharge votes and “quite hopeful” that four more would be secured. “Quite hopeful” in city council jargon means “forget it.”

Hopelessness permeated the air even be­ifore the hearings began. The usual rah-rah gay-rights supporters were missing. No more than 15 (the tiniest number ever) cluttered the balcony, while about 30 assorted “normal” types were there to applaud the opposition.

Key sponsor Carol Bellamy overlorded the proceedings. Clearly playing favorites, Coun­cil President Bellamy pounded her gravel, made final crisp judgments, and jutted her jaw in the best Smiling Jack tradition whenever the minority seemed most out of favor. She ran a tight, mean show.

Challenge time began when a councilman spotted a photographer in the hearing room and demanded that he be thrown out. Bella­my didn’t buy. Then Michael DeMarco of the Bronx told her that she was ruling against the house protocol. Bellamy ordered him to shut up. “If you persist, I’ll have a sergeant-­at-arms remove you from the chamber,” she hissed. House majority leader, Tom Cuite (long the leading opponent of gay rights) en­tered the picture and recited parliamentary procedure. It was clear to the blind what was taking place: the debate was not about cam­eras, but old thinking versus new, censorship versus opennness, anti-gay forces versus pro­-gay. Censorship won: 28 votes to toss the photographer out, 12 to allow him to stay.

Councilman Leon Katz of Brooklyn, with no understanding of the gay-rights issue, claimed that “we can’t enact legislature ad­vocating homosexual conduct as acceptable and as the desirable correct way.” Katz­ — along with many of his colleagues — was un­able to differentiate between doing it and be­ing it. The act defined the issue.

Throughout the endless debate that fol­lowed, mini-melodramas took place offstage. Tom Cuite put his arm around Councilman Fred Samuel, and led him, buddy-like, out of the chamber. Later, when it came time to vote, Samuel, a sponsor of the bill, voted no. What was said — or offered to Samuel — is a mystery that undoubtedly will be solved in the weeks to come. Also a mystery: why Koch wasn’t there to lead a few councilmen to his inner office for a game of friendly per­suasion. Instead, an aide distributed paper­back copies of Laura Z. Hobson’s Consenting Adults as a meaningful gift from the mayor to the council. He’d have done better with Scru­ples.

In all fairness, several 384 supporters spoke quite elegantly. Manhattan Council­man-at-large Henry Stern claimed that if the bill was to be voted down, City Hall would be in backwater, that the private sector was ahead of the public sector. He added that a “no” vote would be a reflection on the city council. Brooklyn Councilman-at-large Rob­ert Steingut offered that he was not con­cerned with millions, but with a handful of people who have no redress to a legislative body. Manhattan Councilwoman Jane Trichter hit the nail on the head when she claimed that “what is operating here is a fear of that which is different.”

That which is always the same, was pro­vided by Bronx Councilwoman Aileen Ryan, whom Murray Kempton called “a most un­movable, hard, dumb woman.”

Ryan wailed, “I am proud that the General Welfare Committee has bent over backwards to give fair hearings … In the name of family and stability, defeat this motion to dis­charge.”

Vincent Riccio of Brooklyn offered good cause for the city to do away with the council completely. “I was told City Council was an easy job,” he complained, “but I spend all my days going to committee meetings.” He proceded to attack the gay community with a viciousness indigenous to tyrants who build support out of hate. From the balcony came hissing, but the sound was like rhumba mu­sic to Riccio’s ears. He took little square steps with his feet when the hissings broke into boos.

“I believe New York should have a refe­rendum,” he continued. “If this bill passes, I shall make such a move.” Apparently he was unaware that a different kind of referendum is being discussed in top gay political circles. One which would allow the voters next year to decide whether the City Council should be abolished. Only 50,000 signatures are needed to get it going.

Riccio concluded his tirade by noting that he had received letters calling him dirty names “because I represent family and reli­gion.” Since reporter feedback was prohibit­ed, I could not tell the councilman that he does not represent my own father and mother, who are originally from Brooklyn, or Morty Manford’s father and mother from Queens, or Vito Russo’s parents from Man­hattan. The Bells, the Manfords, and the Russos happen to love their children. They also happen to be supportive of their beliefs.

But it wouldn’t have mattered if Oscar Wilde’s mother served as the councilwoman from Staten Island. The bill was doomed. Fi­nal vote: 16 for, 26 against — the most re­sounding defeat for gay rights in New York since the bill was first introduced in 1971, approximately seven hearings ago.

The brainchildren who decided to rehash the vote this time are as much to blame as the councilpeople who voted against it. They include members of the Coalition for Lesbian and Gay Rights and the New York Political Action Council (NYPAC), who met with In­tro 384 supporters, such as Bellamy, Jane Trichter, Tony Olivieri, Carol Greitzer, and Henry Stern. All of them knew it would lose, for not only were they dealing with the bill, they were suggesting a change in council procedure. Change is the last thing the mori­bund council would consider. The gay-rights politicos, then, are to be faulted for inflicting further psychological damage to the collec­tive gay psyche. According to NYPAC’s Nick Bollman, “We did it to get the votes on record. The major defeat was when Intro 384 went down a couple of weeks before.”

So now we have a record, and what are we to do with it? Send Kool-Aid popsicles to Ai­leen Ryan and Vincent Riccio? And petunias to Henry Stern?

Threatening, boycotting, educating is not the way to get power from political assholes. Money and favors are. If offered a house in Quogue or a judgeship in Queens, there is no doubt in my mind that several zealot anti-gay gnomes would suddenly open their hearts, if not their homes, and allow the gay vote to tiptoe in.

The morning after Proposition 6 was de­feated — a victory that was more a vote against witchhunts than one for gay rights — I appeared on the Mid-Morning Show in L.A. John Briggs called the TV station. The sena­tor, in the best Douglas MacArthur tradi­tion, swore he and his forces would return. He attributed his loss to the fact that the pro-­gay forces had a million-dollar kitty for ad­vertising while the Briggs guys had a small fraction of that amount. The host asked him if politics was a matter of money, and, in his roundabout way, Briggs admitted it was.

Why gay people insist on being part of this corruption is something I just have come to analyze. Why should our anger erupt because of a defeat that came about through lack of funds or poor advertising or dumb planning? None of this has anything to do with who we are.

The gay-rights bill should be a matter of common decency, not one of political ma­neuverings — from either side.

In Manhattan, Koch doesn’t have the clout to buy off the handful of bigots who claim to represent their constituents, while those gay millionaires and denizens of fashion and high society who own sage brush homes in the Pines wouldn’t think of contributing to “the cause.” I no longer blame them. Gay politics is not the way.

Perhaps it once was. Once there was hope. Once gay power was a joyous cry in this town. Then the thrust toward radicalism died. The stuffed-shirt gay politico appeared. Lethargy set in. Anger followed the Bryant defeat. Sorrow follows Milk.

For gay people the war is on, but the way to fight is not through politics. The way is through pleasure. So when things get tough, my advice to readers is don’t run to the Task Force. Forget about City Hall. Go to Christo­pher Street. And handle matters your own way. ♦

About 250 women and men congregat­ed at Sheridan Square in the rain last Sunday night to form a candlelight procession mourning the death of Harvey Milk. They marched through the West Village to Metropolitan Duane Metho­dist Church, punctuating the quiet night with shouts of “enough shit,” the new gay slogan.

In many ways, the march was similar to the candlelight vigil that followed the Snake Pit raid in March 1970. At that time, a young immigrant, Diego Vinales, fearful of deportation, jumped from a po­lice station window, only to be impaled on a picket fence. Many of the same acti­vists who anended the Vinales vigil were present at the Milk procession, including Jim Owles, first president of the Gay Ac­tivists Alliance, and Craig Rodwell, own­er of the Oscar Wilde Memorial Book­shop.

Rodwell, who knew Milk from the ear­ly ’60s, spoke at the church. He said, “Harvey was an atheist, and I also think he will forgive us for meeting here tonight.” Rodwell suggested that gun con­trol be added to the list of gay issues. Trish Williams, a lesbian folksinger, sang, “You’ve pushed us back/you’ve pushed us back/but you will push us back no more.” The congregation sang along with Williams, as if it were a hymn. 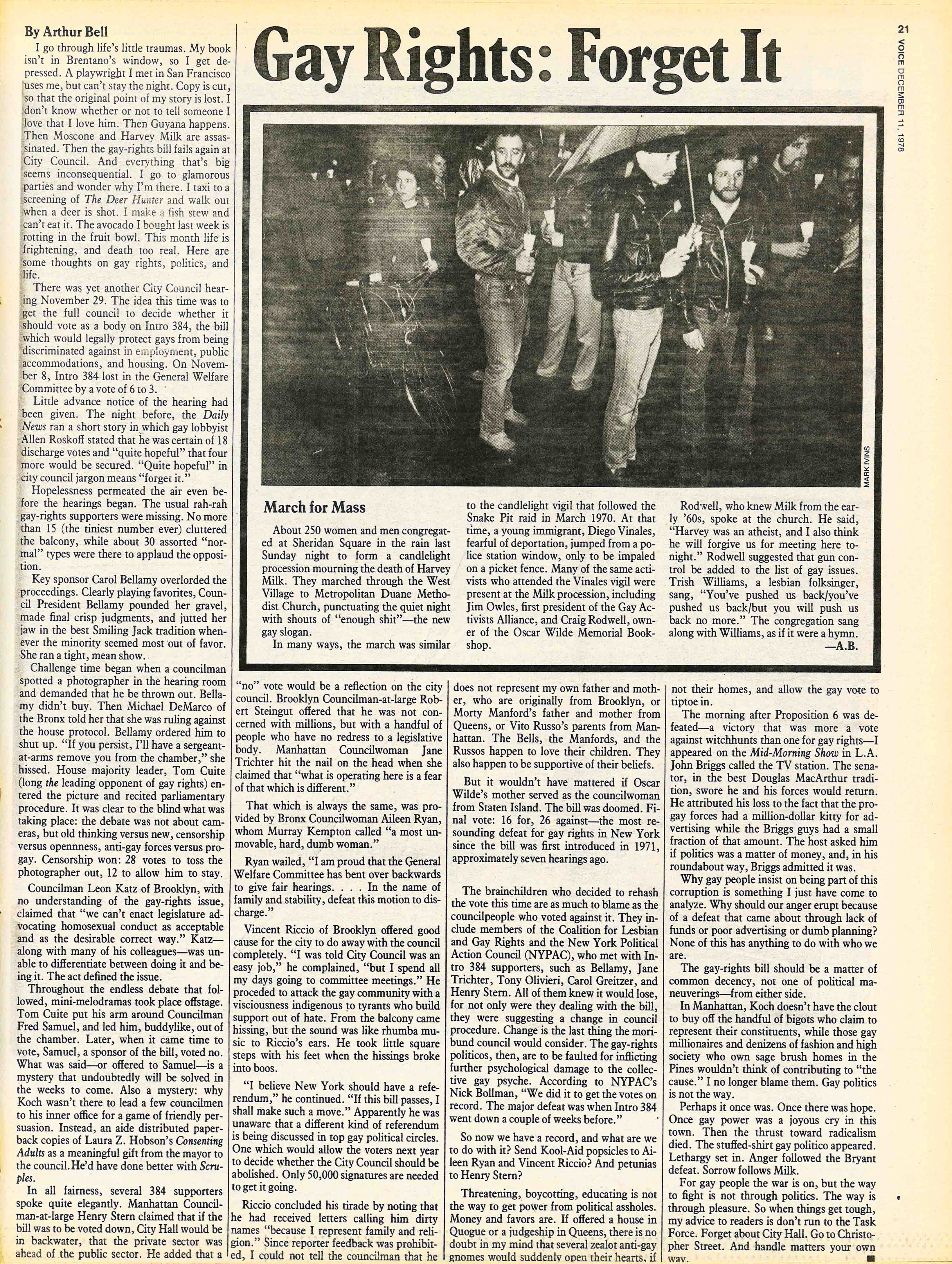