“There is nothing which educates an honorable man more than living in a revolution.”
— Che Guevara, 1960

In the early summer of 1954, a young man who used to be me journeyed by subway from South Brooklyn to the gates of Columbia University. The young man was just out of the navy and wanted to enroll as an undergraduate. He was nineteen.

The university struck him as an even more wondrous and myste­rious place than he had expected. He watched these men with tweedy jackets, horn-rimmed glasses, grave, thoughtful faces; they walked among the trees, smoking pipes, carrying books, and he wanted to talk to each of them. They were like the buildings themselves: heavy with old knowledge, repositories of all those secrets an ignorant kid could not discover on his own. The young man patted the discharge papers in the jacket of his Ripley suit and walked into the Administration Building.

A secretary with a metallic smile told him to sit down. He waited nervously, reading the Post. After a while, he was led into another office. This room was dominated by a large dark glass-topped desk, absolutely clear of papers. On the walls, there were various diplomas and certificates, declaring the impeccable credentials of the man behind the desk. The man was as neat in one way, and baroque in another, as the calligraphy on the scrolls. His head was bald and polished. Cuff links adorned the white shirt that jutted from the expensive suit. His fingernails were perfectly drawn. His face gleamed, the product of tight shaves with a straight razor, followed by heaped hot towels. He was reading a book and did not look up. The lighting was muted and bookish.

After a while, the polished man placed the open book before him on the desk and turned in the noiseless chair.

“I understand,” the man said, without looking up, “that you would like to attend Columbia University.”

“Why?” the man said coldly, looking up. He had ice-blue eyes.

The polished man asked the young man about his background. The young man did the best he could: He had quit high school at sixteen, worked as a sheet metal worker in the Brooklyn Navy Yard, joined the navy at seventeen, read and studied to make up the missing years of high school. He had received high scores on the equivalency examina­tion. He had read Fitzgerald and Hemingway and Conrad in the navy and he wanted to be a writer. He was prepared to work as hard as anyone at Columbia. The bald man listened abstractedly, then smiled thinly and stood up.

“Well,” he said. “I’m afraid Columbia is not for you, young man.” He pushed his hands into the pockets of his vest. “We only have room for a certain number of students every year. We turn away thousands. The choice must be made on academic qualifications.” He paused. “Why don’t you look into the community colleges? Perhaps you could be a technician of some sort.”

The young man walked back to the subway, feeling humiliated and angry, hating the quiet trees and the tweedy men with the books and the pipes, and the students with their scuffed sneakers, and the weathered buildings, and the sun itself dappling the walks. All right, the young man was saying, I’ll do it some other way. You hard Protestant bastards. There were other ways to an education.

Columbia did not change much. Every once in a while they announced plans to “broaden the ethnic base” and things like that. But it stayed the same on other matters. I imagine that the people who started — four or five years ago — to protest the building of the gymnasium also had polite, hard interviews with balding men. The bald men were not much interested in kids who wanted educations but who didn’t have the money or the background. They were interested in making the University more corrupt: They look money from the Defense Department to study more efficient ways of killing people. They acted smug and indifferent when the Pulitzer prizes degenerated into annual awards to save obscure newspapers. Those were only the more public sins; the others were worse.

The trouble with the people who ran Columbia was that they didn’t really care about other people very much. They had a great institution, 214 years old, and that institution would survive all sound and fury. Yes, money was short. The tuition climbed and climbed, and the neighborhood surrounding the University grew shabbier and shabbier. But Columbia didn’t change because it couldn’t change. It poor­-mouthed a lot, and reminded you of those English barons who sell off sections of the family estates to pay for the gardener. But it didn’t change. The English barons didn’t take honest jobs either.

So the reactions to what happened in these past few weeks were a confusion of feelings. First, one felt that the paper revolutionaries were just acting out another episode in middle-class psychodrama. They talked about being Che Guevara; they were more like Regis Debray, heads filled with theories of violence, but ready to call Dad for the bail money when the going got rough. Going forward to the armed struggle with a comfortable allowance in the pocket was not the same as dying on a mountaintop in Bolivia. Climbing into a school building and locking the doors was not exactly heading into the Sierra Maestra. You felt like saying: Hey, baby, if you don’t want an education, I know 100 kids in East Harlem who would love to take your place.

But then the cops were unleashed and you realized that the kids were right again and you were wrong. In the end, Columbia acted like all owners of property: The cops acted like cops. I suppose the cops had other things built into that part of their response which was vicious and disgusting; the police, after all, are the best symbols of the middle class we have, believing in order more than justice, in timid acceptance of authority more than personal responsibility. They didn’t rough up the blacks in Hamilton Hall because the blacks were tougher; they had strategic resources only a few blocks away. But the white students were just a bunch of Jew bastards with long hair and multi-syllabic vocabu­laries. The cops broke their heads because they didn’t want their kids to grow up that way. A white cop’s kid would never grow up to be a black man.

The SDS kids must have felt relieved when it was over, because the cops reacted just as SDS had predicted they would act. Every time you accuse the New Left of being paranoiac, our institutions turn around and show that it is you who are naive and innocent and the New Left kids who really know what is happening in this society. A lot of what happened at Columbia was farce, a lot was tragedy. But there are none of us who could truly say that every student in the school did not receive an education in those two weeks. In a violent country, the bat and the blackjack are becoming as important an educational tool as the slide rule and the pointer. 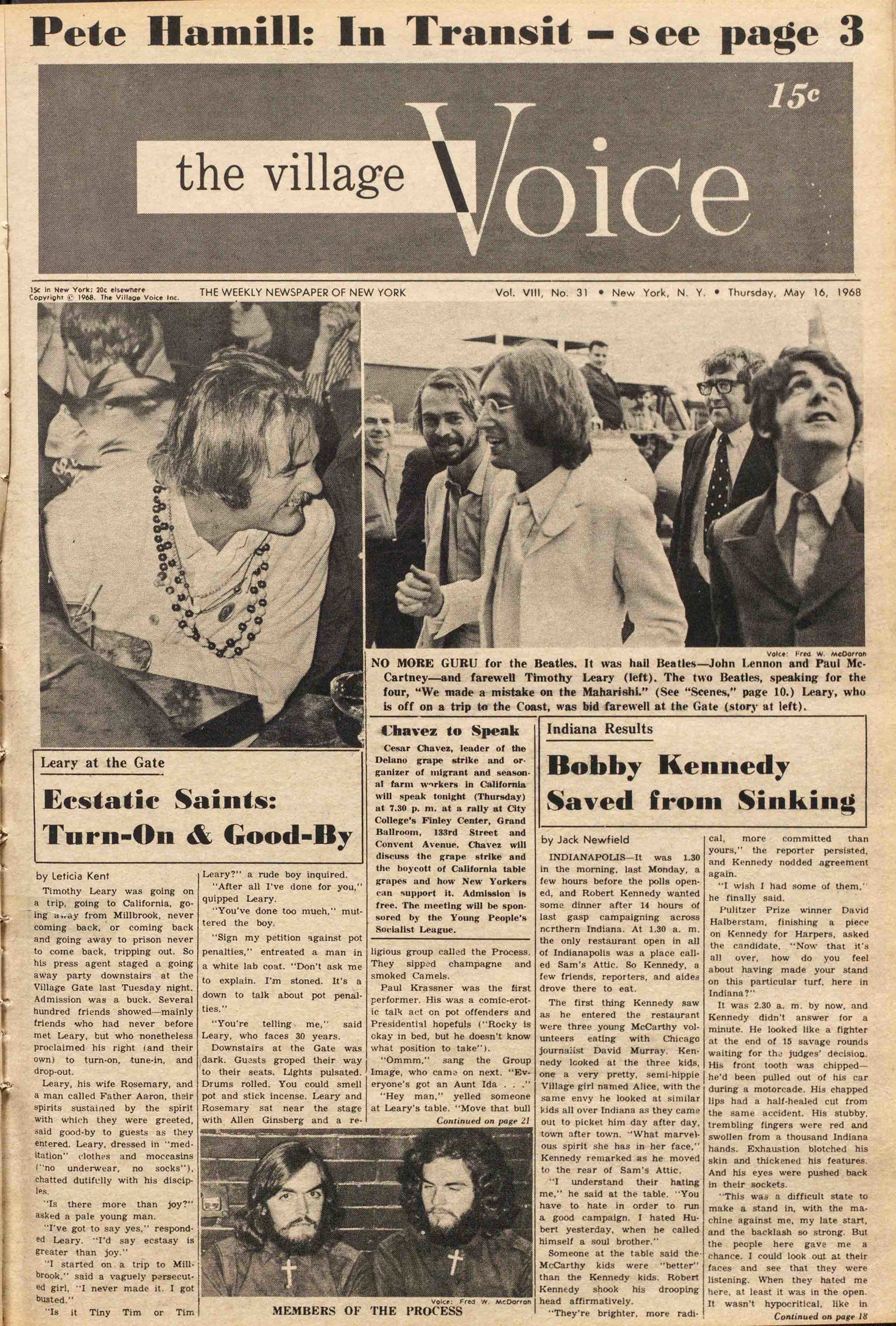 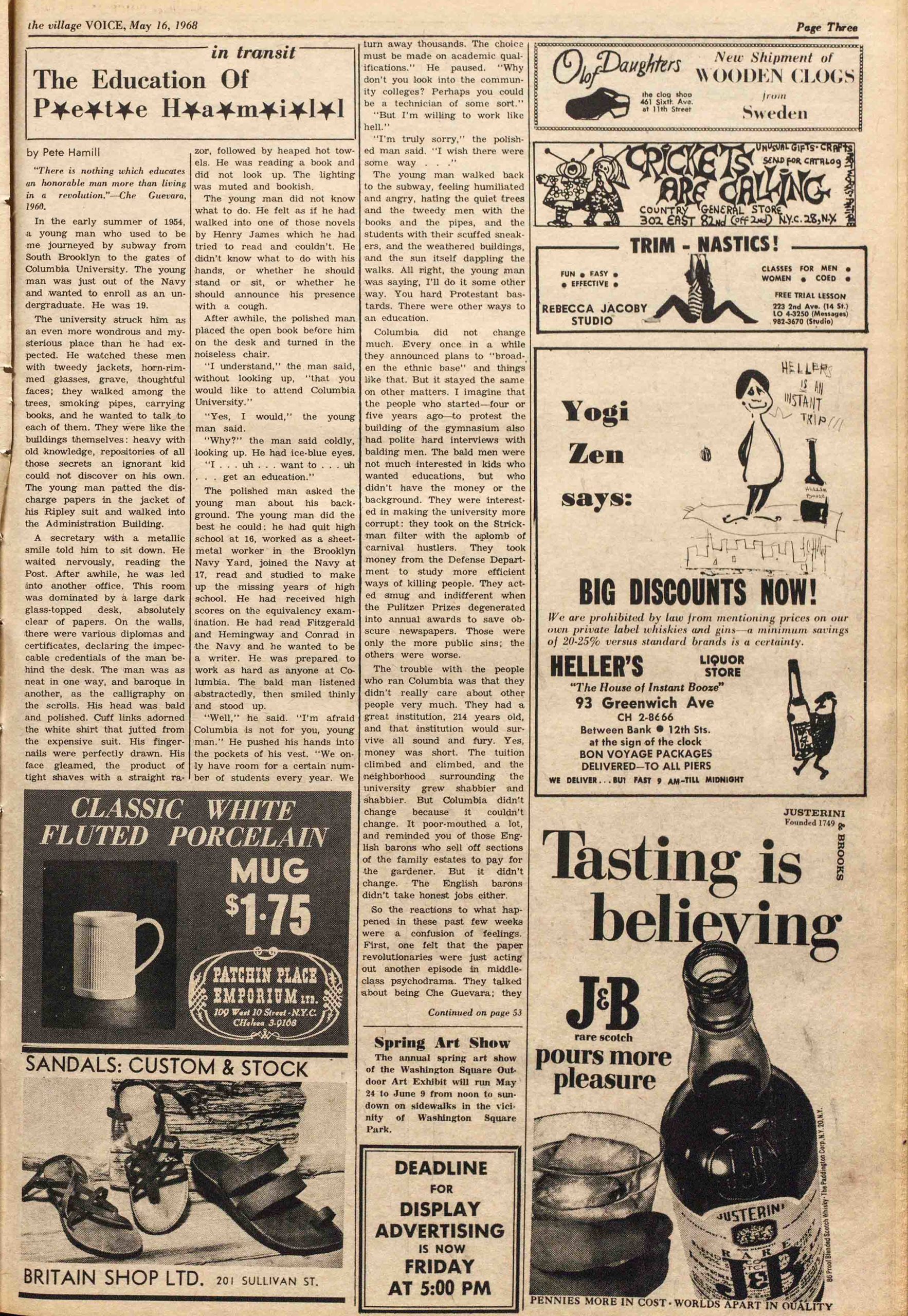 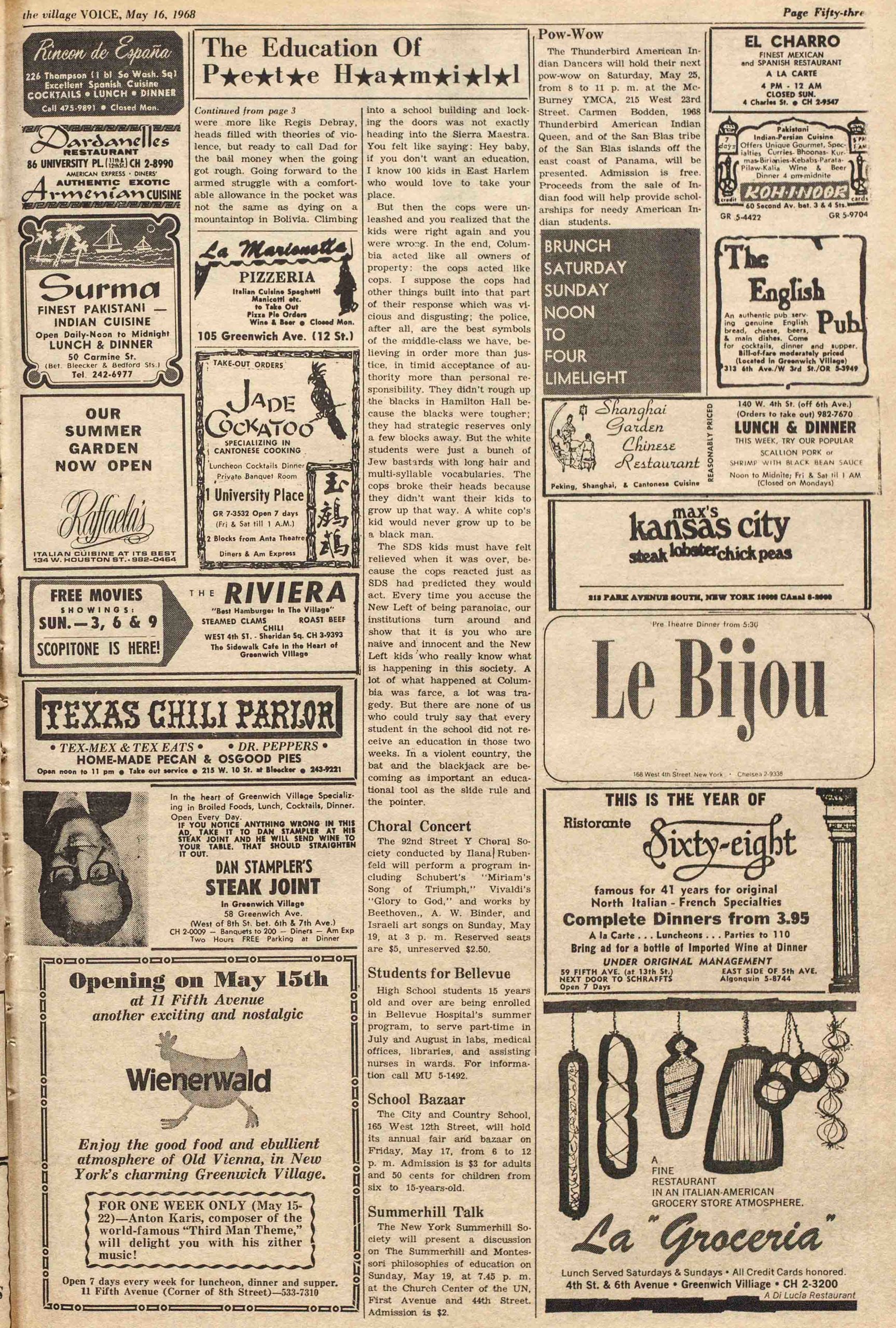