The question: Black Identity. The problem: Who names it, claims it, and decides who profanes it. Here at the crossroads, whose Black Consciousness movement is it any­way? Like the man said, Van Glorius’s. In other words, it’s every man for himself on that one, G. When I was younger and very much the aesthetician, I believed that Black cultural difference was gonna set us free­ — that our salvation and liberation would come in realizing how great Black art set us apart from the illin’ white boy and his cre­ations. If we could make Black political parties function like Parliament-Funkade­lic, we’d be kicking much ass. Having wit­nessed participatory democracy at work in our Black Power renascence of the past five years, that delusion has gone the way of P­Funk’s fabled mothership. (Park it in the dustbin of history, boys, and don’t stop for fading spotlights.) The resurgence of Goth­am’s Black Power movement has been both a welcome and a woeful affair. Welcome because of the bridge it has formed between today’s young rebels and the long-­toothed tigers of yon; woeful because fatuous male posturing, demagoguery, and gen­erational envy have also made a sorry comeback.

Spike Lee and Amiri Baraka at each oth­er’s throats over who owns the legacy of Malcolm X is one more pathetic episode in our movement farce. For the record, I think Baraka has about as much business telling Spike how to make a politically correct movie about Malcolm X as Spike would trying to instruct Baraka on verse structure. I’ll be stunned if Spike overcomes his immaturity as a storyteller and makes a film with anything approaching the complexity of Malcolm’s world and worldview, but c’est la vie. Ain’t nothing but a movie y’all, and after those two hours in the dark are over we’ll all still have to get up the next morning and deal with being Black men and women in America. Which at the end of the day is about what? Learning to love and struggle with one another, end of story.

Three weeks ago, at the funeral services for a flame of a life named E. Tamu Elling­ton Bess, I realized that the meaning of being Black is summed up in who comes to bury you, who gathers together in your name after you’ve gone, what they have to say about how you loved, and how you were loved in return. Offering such testimo­ny at Tamu’s services was a cross section of our community’s Afristocracy, politicos, artists, activists, bereaved friends, and fam­ily. People presented songs, dances, poems, and soliloquies in her honor. By the end, without knowing any more than the sketchy details of Tamu’s life, you knew she’d made everyone she’d touched more aware of the sacrifice, service, and devotion Black Con­sciousness demands.

Though I didn’t know her that well, Tamu was revealed to me as one of those exceptional Black folk who are at home wherever African people are, regardless of geography, class, custom, cuisine, or crea­ture comforts. If there’s any legacy of ’60s Black Nationalism I find ennobling and empowering, it’s that movement’s Pan­-Afrikanist embrace of Black folk every­where as brother and sister. Recognizing a loss to our community like Tamu Bess’s, you realize that any liberation or empower­ment strategy that doesn’t grow out of love, in its most constructive, critical, and com­passionate senses, is useless.

What makes the oratory of Malcolm en­dure as a source of enlightenment isn’t just his clarity about how white supremacy works, but also his desire to see us love our African selves more than we love the world of the oppressor. We still listen to Malcolm because we hear the voice of a lover, some­times asking what Bob Marley asked­ — could we be loved — other times asking us why do we love white America, or at least its status symbols, more than we love our­selves. I find the essence of Malcolm’s criti­cal ardor for Black people lacking in most of our grandstanding spokespersons of the present. The Black love you find manifest­ed today is mostly a love for Black Male Posturing. Now, BMP is truly a marvelous thing. Yet do I marvel at it everyday. Where would hip-hop or jazz be without it? Basketball is defined by it, and the streets of downtown New York would be looking mighty shabby for its absence. But the im­potence of current Black nationalist politics comes from its being phallocentric to the core, so caught up in stroking its own hard­-on that it makes no space for the balance offered by feminine wisdom. We have nev­er in our history had a movement that wasn’t well-populated with female leader­ship. These days, part of the reason issues of daily violence and oppression never get discussed is because the people on the frontlines, women and the children in their care, have no voice where legal-eagle activ­ists prevail. So even when the victimization of a Black woman is at the heart of our rallying, it becomes reduced to what dream hampton refers to as a “nut-grabbing contest.”

The tragedy of this isn’t the gesture itself, but how misguided the movement is in terms of targets and objectives. When I look up to see hundreds rally behind Pro­ fessor Leonard Jeffries when he’s predict­ably attacked for Jew-baiting, I got to won­der what’s the goal beyond reactive rage. (And on the “Jew-baiting” charge, let’s be real. When you put the bait on your line, expect fish to bite, especially if the bait is live and in living color. Jews may be disin­genuous about holding economic, cultural, and political power and privilege and abus­ing it, but some Black folks can be just as disingenuous about admitting they despise Jews more than they despise the average cracker who isn’t a cop.)

Large numbers of Black folk in this town get more upset over being disrespected than they do over being disempowered. Why look for respect from a power structure so greedy it would destroy the planet on which its grandchildren will have to live? I expect neither justice nor respect from white pow­er and certainly not love. What I expect from Black folks is for us to organize in such a way that we make the white power structure understand that it would be in its own best interest not to fuck with us. But no. We’re more concerned with scoring intellectual brownie points than we are with that kind of unifying. (Or, for that matter, with raising the level of reading and writing skills of Black kids in this city or even with improving the rude physical plant of their learning environment. Far as I know, there are currently no plans afoot for mass, fire-breathing demonstrations to protest toilet­-bowl classrooms.)

Favoring issues of disrespect over strate­gies of empowerment will keep us chasing after love from a muhfuh that don’t love nobody. Such folly leaves us with a politics of reactive rage and race-baiting that my friend Melvin Gibbs astutely defines as “just another form of Tomming and min­strelsy because the audience is always the white man.” My suggestion is we give up the white man as the problem per se and start thinking of him as a natural disaster, a catastrophe we may be unable to prevent but whose destructive effects can be over­come and reversed. I also think we need to let go of the idea that some real natural disaster like the dissolving of the ozone layer is going to wipe the white plague off the face of the earth. You know by the time that day comes, these muhfuhs will be liv­ing in bubble cities and have your ass in the cold paying for air sandwiches faster than you can say Jackie Robinson. Later for Black to the futurism. Your mind may be in Khmet, bro but, yo …

When reactive rage is the dominant form of our politics, when it takes police or mob violence to galvanize us into reaction, it means that there is an acceptable level of suffering and misery. When quality of life issues are not given the same attention as our antilynching activities, it means we have a low level of life expectations. It also means, as Dr. Frances Welsing has pointed out, that there is a general state of depres­sion operative in the Black community that provokes other problems, such as drug abuse. The warriors we need to step forward now aren’t the confrontational kind, but healers. Folk who know how to reach into where we really hurt, to the wounds we can’t see and that nobody likes to talk about. Outside of Joan Morgan, no one has spoken on the traumatic impact John Sin­gleton’s Boyz N the Hood had on many young Black ghetto escapees for whom it screened more as a nightmarish flashback than as escapist entertainment. If Black male leadership doesn’t move in the direc­tion of recognizing the pain and trauma beneath the rage, as the work of Toni Mor­rison, Ntozake Shange, Alice Walker, bell hooks and other women writers have done, if we don’t exercise our capacity to love and heal eachother by digging deep into our mutual woundedness, then what we’re struggling for is merely the end of white supremacy — and not the salvaging of its victims.

Next: “Beyond Assimilation” by Michele Wallace 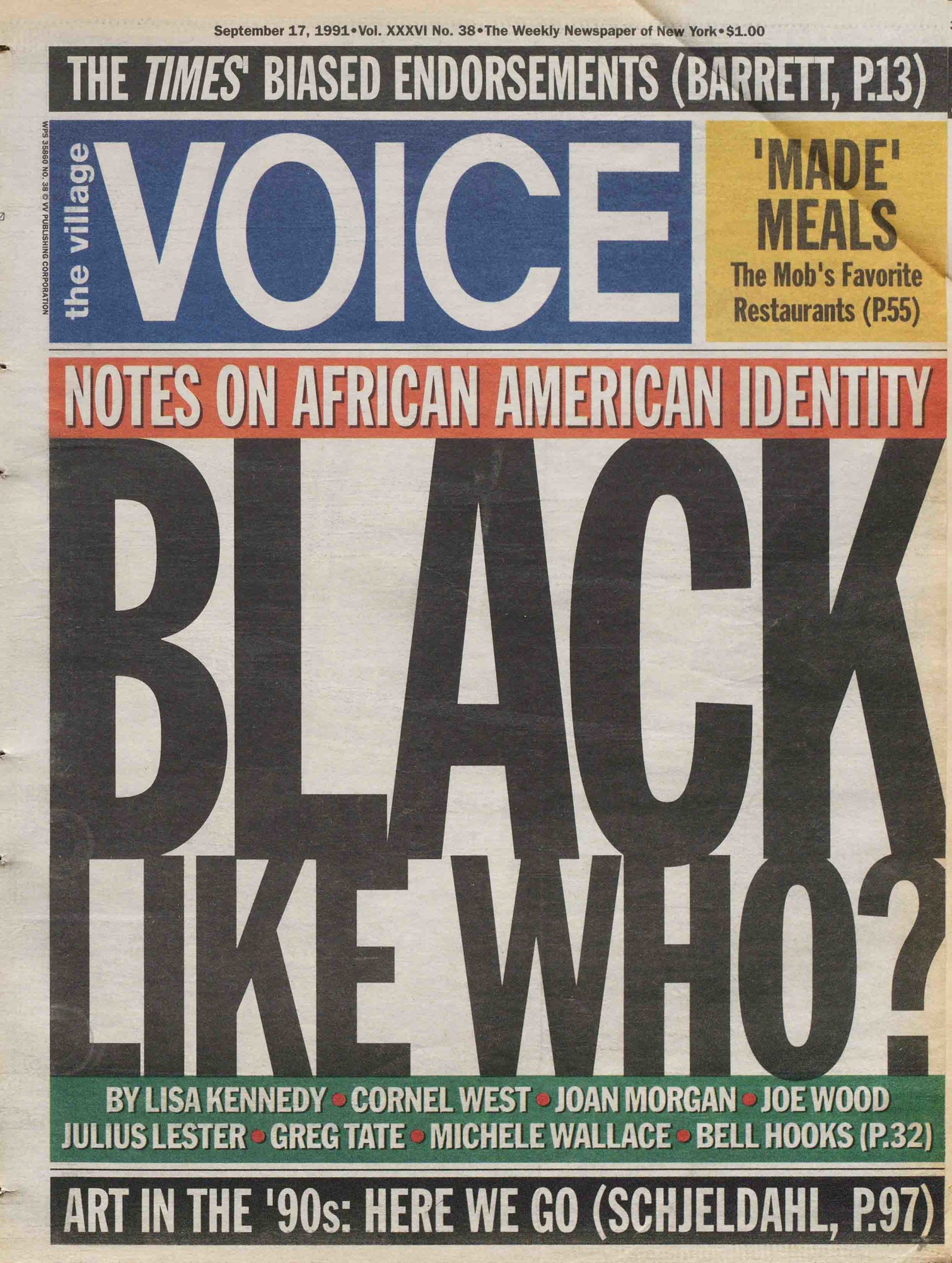 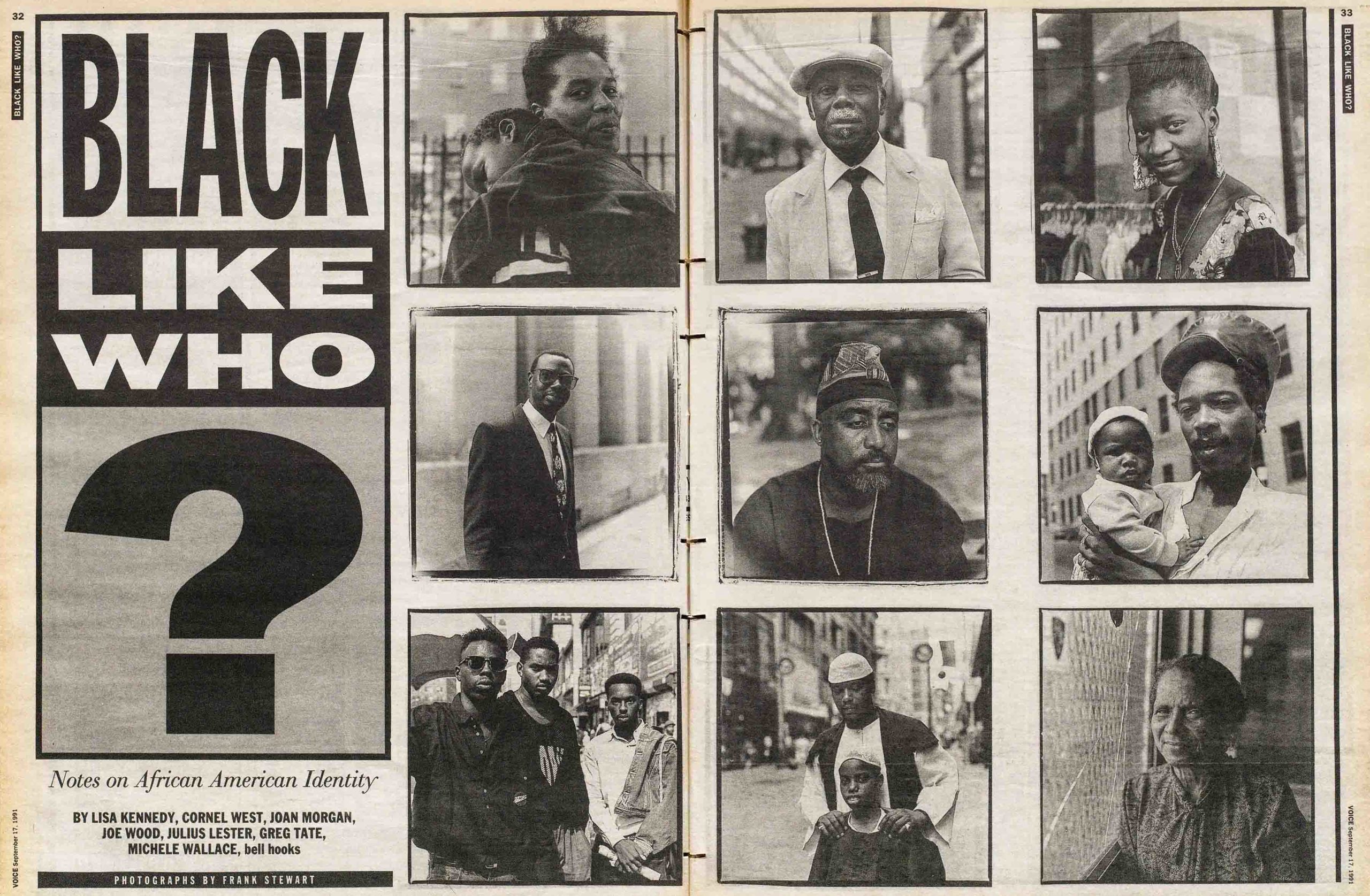 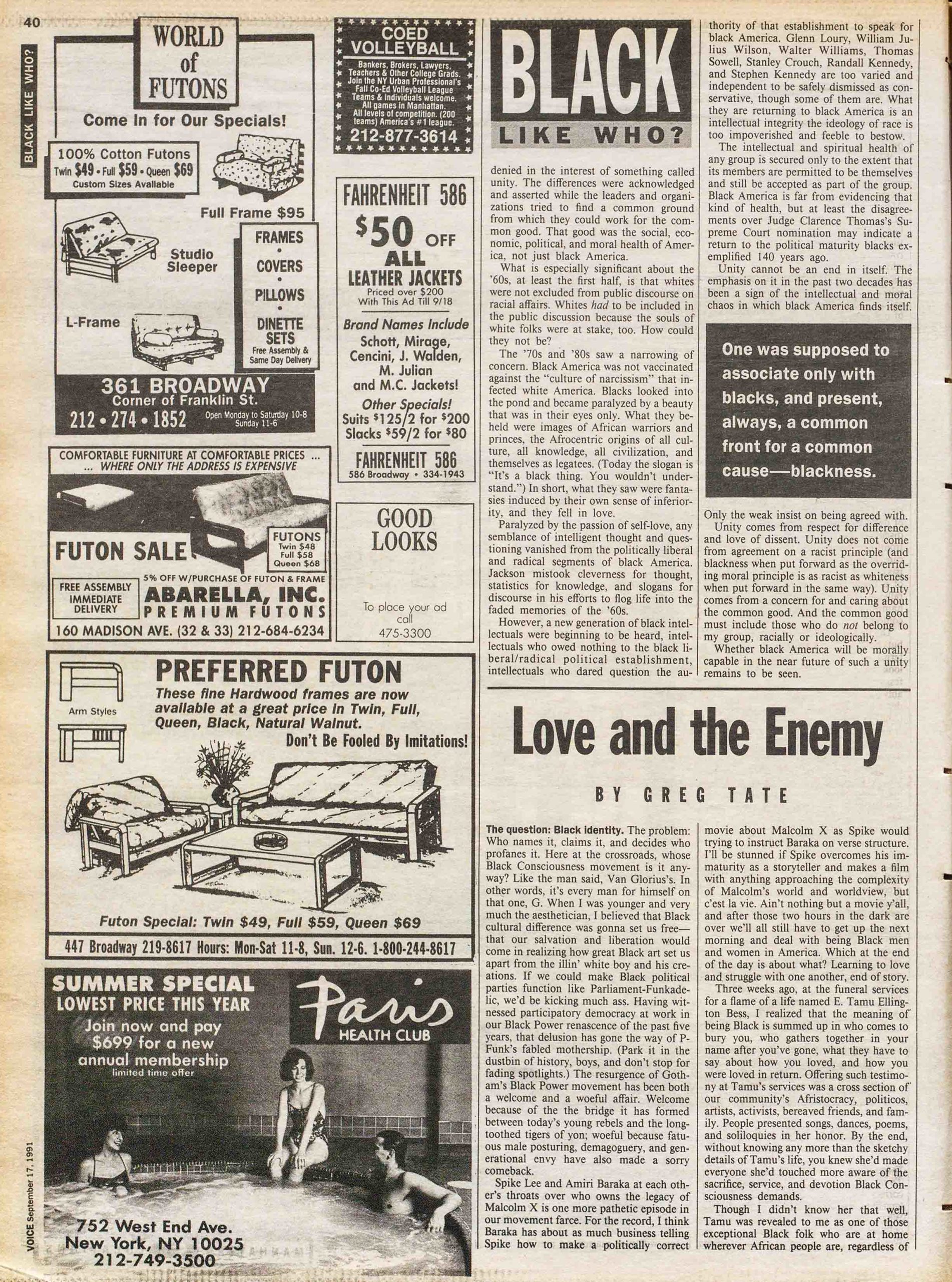 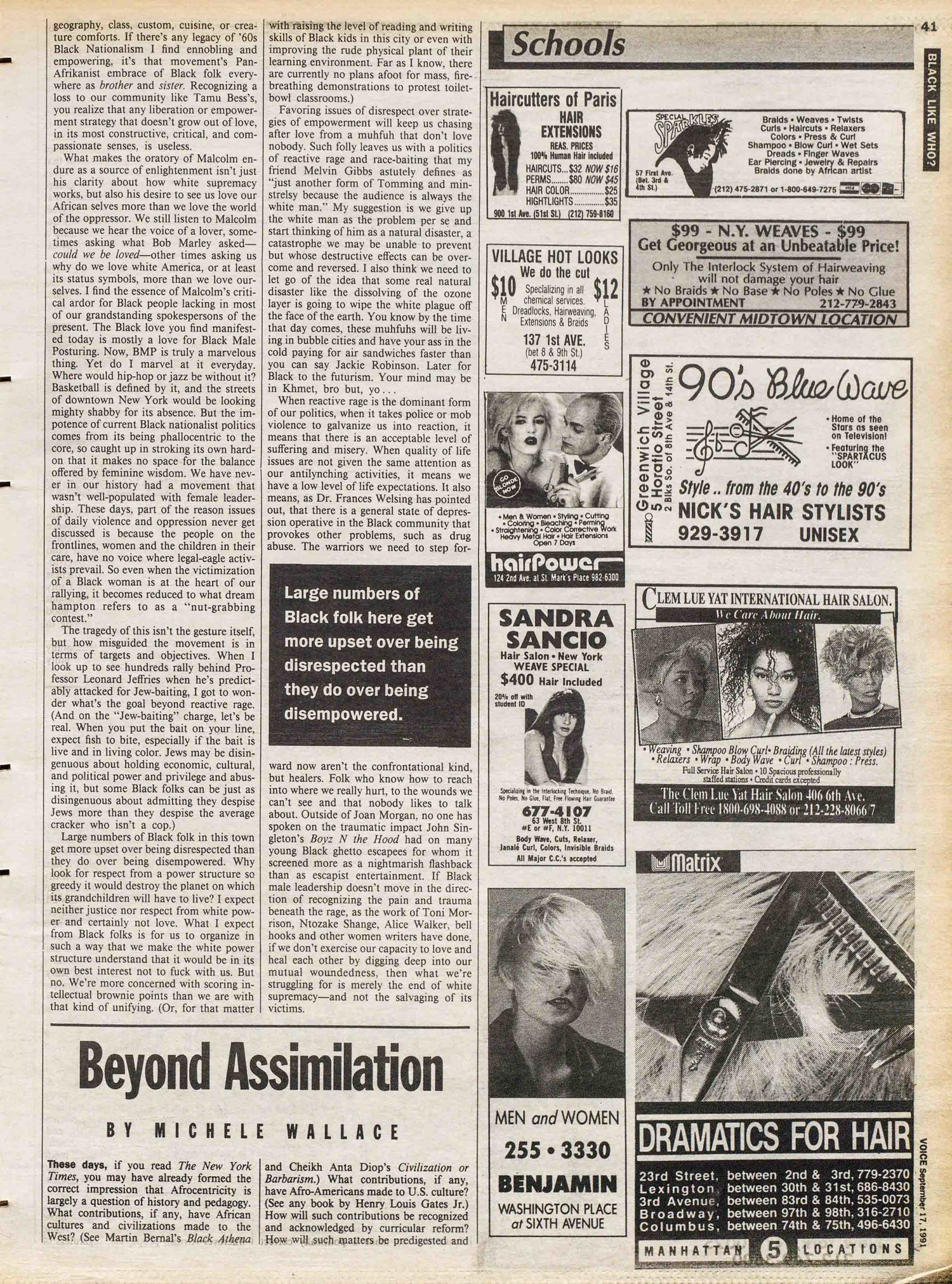