There are three legends that are told of how enslaved Africans in the Texan territory came to know of their freedom, and why the word didn’t get to them until two months after the civil war ended, which was a good two and half years after Lin­coln’s Emancipation Proclamation. Or, to make it plain, rather late. One legend says the messenger, a black Union soldier, was murdered. Another says he arrived, but was delayed by mule travel. (A variation on this is he stopped to get married.) The third and favored is that the news was withheld by white landowners so they could bleed one last crop from slave labor. What is held as fact is that June 19 — the day that federal troops rode into Galveston with orders to release those kept as slaves — has been celebrated, in Texas and beyond, for 127 years, as Emancipation Day, as Jubilation Day, as Juneteenth. The day the last ones heard.

Juneteenth, the name, is one of those fab African Americanisms, functional, rhythmic, at once concise and not too concise. It fuses the month of June with the number 19, and eludes that the holiday was held in adjoining states on different days of the month as folks got the word. Early emanci­pation rituals were not exclusive to Texas or these territories (South Carolina and Mississippi’s fall in May), or to the South. What may have been the first emancipation ceremony was held in New York as early as 1808 to mark the legal cessation of the slave trade.

No state comes close to Juneteenth in Texas, the black folks’ Fourth parades, feasting, pageants, and preachifying. Eman­cipation-day organizations in Texas date back to the turn of the century. The most powerful image from the early days must have been the former slaves themselves, who, according to tradition, marched to­gether at the end of the parade lines. By the 1950s, Juneteenth Day came to be linked with freedom not from slavery, but from segregation. Texas’s Jim Crow cities would allow blacks to be citizens for 12 hours a year by granting them entry into whites­-only parks and zoos. With the passage of the civil rights bill in the ’60s, refined black Texans abandoned Juneteenth to their country cousins and took to celebrating in­dependence day in July along with their majority brethren. A Juneteenth renais­sance has been gathering steam since the mid ’80s, spurred by the latest wave of the Afrocentricity crusade. It’s become in re­cent years not just a hootenanny for black Texas (to use the condescending folksy por­trait favored by the local press), but a holi­day eagerly adopted nationwide by African Americans in search of cultural signposts. Not to mention one that offers a dramatic, tube-and-T-shirt-friendly soundbite of black history.

The J-Day momentum is due in large part to the efforts of a man who could be called Daddy Juneteenth, state representa­tive Al Edwards from Houston. Edwards sponsored the bill that made Juneteenth an official Texas holiday 13 years ago, no small feat in a state that still closes banks for Confederate Heroes Day. Juneteenth U.S.A., Edwards’s organization, is tracking J. Day rites across the country and raising funds for a national educational headquar­ters. To Edwards the holiday has tremen­dous secular and sacred promise. He sees it as an economic vehicle for African Ameri­cans, as well as a day that should be ob­served of almost holy remembrance. “The Jews say if they ever forget their history, may their tongues cleave to the roof of their mouth … Let the same happen to us,” he cautions.

You can find Juneteenth rituals in all regions of the country now. States like Cali­fornia where Texans migrated en masse have held Juneteenth festivities for de­cades. The New York area’s largest is in Buffalo, tapping into upstate’s rich history of antislavery activity. Wisconsin counts at least five, including Milwaukee’s, where Juneteenth has been celebrated since 1971 and is the best-attended single-day cultural event in the state. Far from being family picnics, these festivals sometimes last for days, made possible by the legwork of com­munity groups, city cooperation, and pri­vate sector donations. Often old world knocks against new-world when Miss June­teenth pageants (inherited from towns like Brenham, Texas, which crowns a “Goddess of Liberty”) share the stage with Afrochic street fairs ablaze in faux kente.

Juneteenth in Minneapolis, now in its seventh year, is becoming known as one of the most progressive and trendsetting J­-Day celebrations in the Texas diaspora. What began as a poetry reading in a church basement is now two weeks of program­ming including a film festival and an Un­derground Railroad reenactment.

There are those who think Juneteenth is an embarrassment. That the holiday tells more of our ignorance and subjugation than of an inheritance that predates slavery in the Americas. Or that it’s “too black,” and promotes a separate but not equal Fourth of July, or “not black enough” be­cause it’s funded by white purses. And, of course, that it’s far too symbolic and doesn’t solve anything. What does a June­teenth celebration mean anyway when the Freeman’s Bureau never gave us our 40 acres? (Not thrilled about news of the state holiday, one former Texas legislator had this to say: “Dancing up and down the streets, drinking red soda water, eating watermelons … I grew out of that.”) But Juneteenth critics are few, and what they have to say hasn’t put a dent in the holi­day’s grassroots popularity.

Buried in their shopping ethos, we tend to forget holidays were once holy days that defined us in more profound ways than what Nintendo jumbo pack we got for Christmas. Michael Chaney, an arts activist in Minneapolis, believes that Juneteenth rituals could be more than acts of racial communion but could have a role in rede­fining America: “We have to realize our own role as historians. We need to ascribe our treasures and offer them to the world. Juneteenth should be a day for all Ameri­cans to get in touch with the Africanism in them.”

Juneteenth does have great possibilities as a new American holiday. The families that emancipated slaves made were com­plex: they weren’t just about blood type but about family beyond kin, family as commu­nity. In this tradition, modern Juneteenth doesn’t circumscribe any Dick-and-Jane paean to the nuclear family. You can be a single parent, gay, from D.C. or Ann Arbor; it’s a history that includes you. You can read the Emancipation Proclamation out loud or drink some red soda water if you damn well please. Or just take a moment out of your day to think about all the folks that laid down nothing less than their lives so that you could see the 20th century. 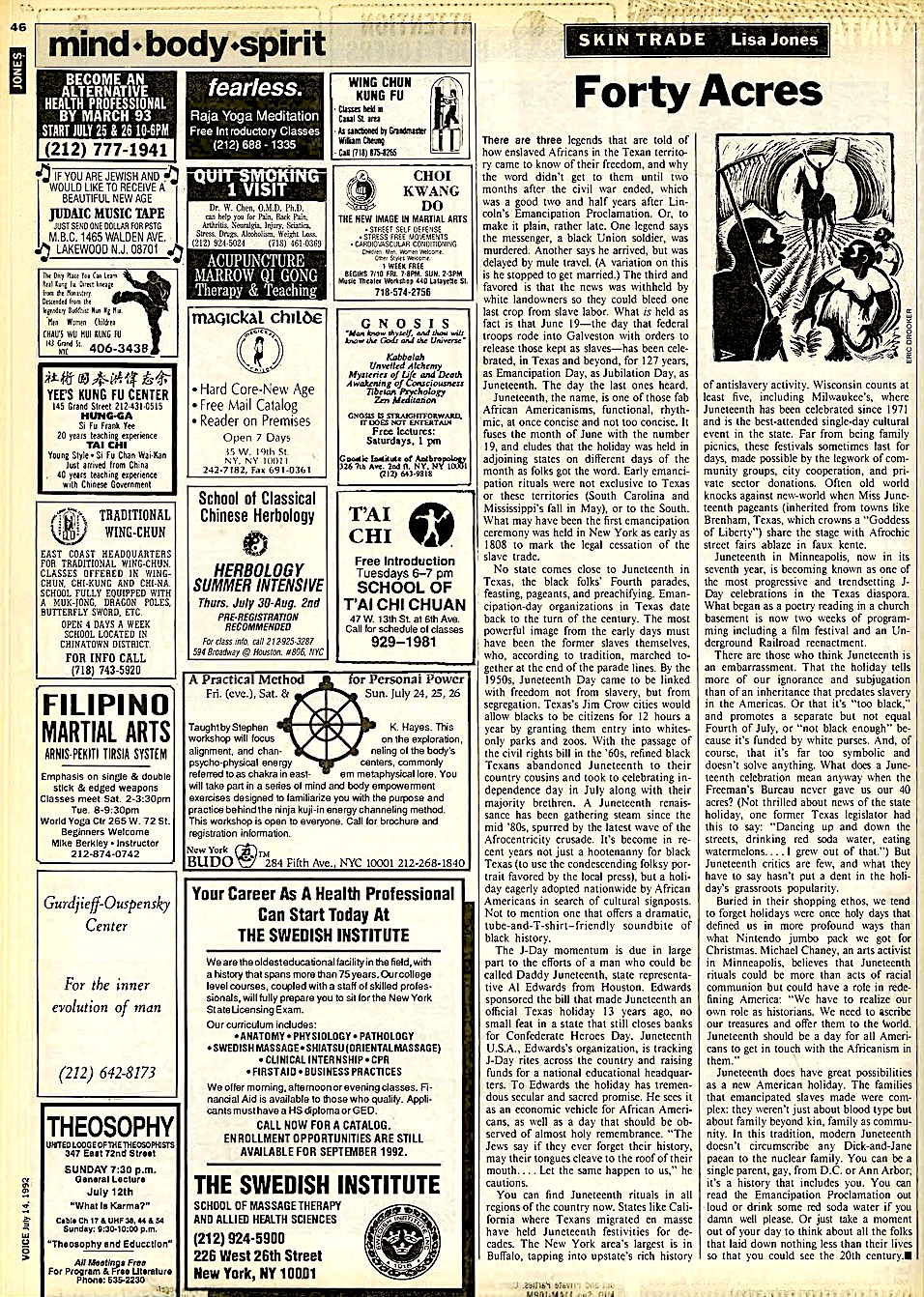