WASHINGTON, D.C. — Behind the Waco and the Whitewater hearings lies a concerted effort on the part of Republican right “revolutionar­ies” to make use of its anarchist fringes.

Ever since Newt Gingrich turned self-hate into a campaign manifesto last November, the GOP has been conducting a risky affair with the far right. Now, though, this “we’re crazier than the crazies” stance seems to be backfiring. As the Waco hear­ings have demonstrated, it helps to know a little about the cause you’re supporting. Far from martyring David Koresh’s Branch Davidians and hence elevating the Christian right above law and order, the testimony of one Davidian survivor last week only reinforced the government’s accusations that Koresh was a child abuser.

No doubt Republicans, and their NRA sponsors, will have better luck beating up on the ATF and FBI once hearings begin into the 1992 Ruby Ridge raid on the home of white supremacist Randy Weaver, but for the moment they are split on how to play their far right wing.

Gingrich continues to indulge the anarchists, just last week weighing in on the favorite wacko topic of who killed Vince Foster. Meanwhile, Helen Chenoweth in the House and Larry Craig in the Senate continue to run wild, attacking the effrontery of federal agents and invoking the specter of the dreaded black helicopters.

But last week mainstream con­servatives regained their voice. In the Washington Times, Peter King, Republican congressman from Long Island, wrote in an op-ed, “Why now are some conservatives so willing to turn the presumption against federal law enforcement agen­cies such as the FBI and the Bureau of Alcohol, Tobacco and Firearms? Why was it wrong to call cops ‘pigs’ in the ’60s, but acceptable to call federal agents ‘Nazis’ and ‘jack-booted thugs’ in the ’90s? If it is because gun own­ers are considered to have a status different from blacks and left wing demonstrators, that would be unac­ceptable since principles are immutable and cannot be altered to suit the situation. 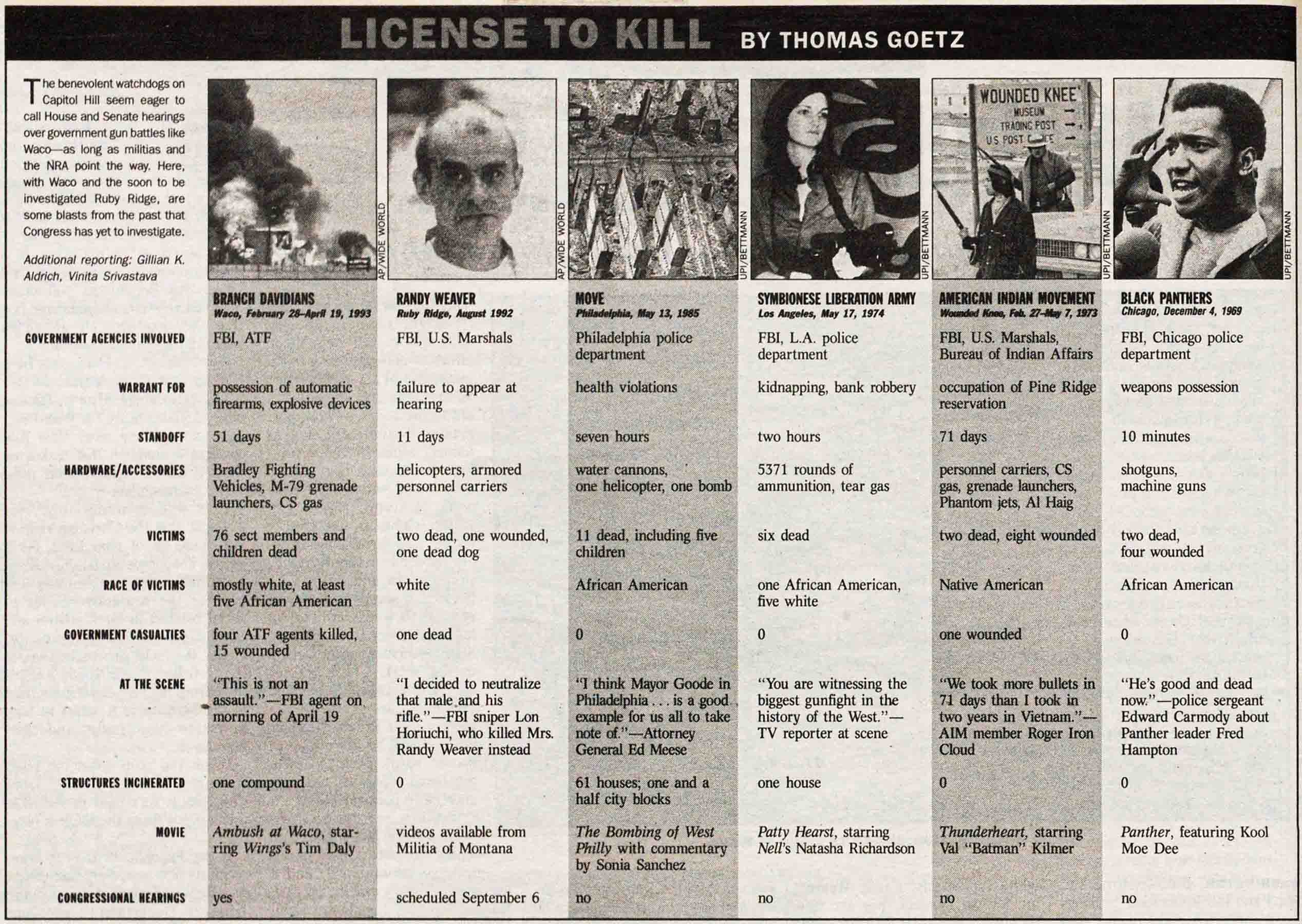 “Nothing that happened at Waco and Ruby Ridge justifies citizens arm­ing themselves for some eventual struggle with the government. That is not what we do in a democratic society where we have the means to control government abuses at the voting booth and through the courts. Militia supporters talk of the ‘spirit of the Founding Fathers,’ but it was George Washington, the Father of our country, who denounced Shay’s Militia and the Whiskey Rebel­lion as threats to ‘republican gov­ernment.’ Any armed force with a political agenda in a democratic society is a threat to republican government.”

The Waco hearings have provided little substance. Unlike Watergate, or even the Iran-contra inves­tigation, there has been little or no effort by the Republican chairmen to figure out why the raid was staged, and the hearings have largely omitted the ludicrous attempts of the ATF to woo the press that played a major role in the timing of the first raid. From start to finish, the hearings have been a PR move, basically an effort to publicly attack the ATF in order to revoke the assault-weapon ban. More sub­tly, the hearings have played to the Christian right, key supporters of the Republican majority, and an entity everyone in Congress fears. But more than anything, the hearings have provided a dazzling display of farce and hypocrisy. Repub­licans who had been slashing away at the Fourth Amendment on the House floor earlier this spring in their determination to pass a tough crime bill have now been portray­ing themselves as feel-good liberals, invoking the rights of the Constitu­tion on behalf of Koresh and the other “individualistic” Christians within the compound.

Aside from the desire to pander to Christian conservatives and the gun lobby, the Waco hearings are also an attempt to play to the lib­ertarian-anarchist wing of the party. Behind the attack on the ATF is anarchist frothing for the role of county sheriff in govern­ment. In Waco, the sheriff was on friendly terms with Koresh and clearly had no intention of challenging the Davidians, despite the accusa­tions made against the group. Indeed, various Republicans at the hearings came awfully close to suggesting that the sanctity of pri­vate property should have acted as a barrier against any federal intrusion. The argument that what Koresh was doing was his business and nobody else’s will get any politician, Christian right or other, firmly clobbered in the polls.

At first look, the new love affair with the role of county sher­iff might seem to go well with the overall Republican effort to decentralize govern­ment, removing power from Washington and spreading it out to the states — whose gov­ernors Republicans see as natural allies in the revolution to remake the federal government within the frame­work of states’ rights. But states’ rights is not county rights, and invariably states are opposed to county rights, siding again and again with the federal government against efforts to wrest control of land and water from the feds. State governments, especially in the West, where county rights is a much-publicized movement, are generally dri­ven by their urban citizenry, who stand to lose power should rural, often sparsely populated, counties suddenly grab more political power.

Western revolutionaries, such as the Wise Use and county movements, have gained national prominence, and a degree of legitimacy, over the last year, but just how the Republican right, centered around the followers of former interior secretary James Watt, intends to rope in these loos­er-than-loose cannons is unclear. Whipping up emotions over the sovereign rights of the county sher­iff may be good as a Gingrichian sound bite, but is a card no serious Republican politician who wants to stay in office is apt to play.

Why, to cite but one example, would any serious Republican (or Democ­ratic politician) in Nevada want to put rural Nye County, the hotbed of the county secession movement, on an equal footing with Las Vegas, the fastest growing city in the nation?

And playing to anarchist Repub­licans almost inevitably opens an attack on the whole structure of local government. In Oklahoma, for instance, the Oklahoma Tax Com­mission revoked Woodward County agent June Griffith’s appointment after she filed what she called her “sovereignty papers.” According to the Enid News & Eagle, “similar papers show up in courthouses across Northwest Oklahoma, with only the filing party’s name changed, rejecting Social Security numbers, birth certificates and marriage licenses and renouncing U.S. citizenship.”

In northwestern Oklahoma this movement, which threatens to play havoc with the local Republi­can organization, “appears to be little more than a loosely orga­nized collection of disgruntled property owners who have lost their land in foreclosure actions and who hold forth on farms and in homes across Northwest Oklahoma to redress their grievances against the system.” The result is clogged court filings with false judgments against banks, bogus liens, phony subpoenas for state prosecutors, lawsuits against federal, state, and county governments.

Through the Wise Use, county, and property rights movements, the GOP has built a supercharged engine of conservative politicking. This attack group leads the fight against environmentalists and is the driving force of every move­ment aimed at tax reduction. It is an angry and highly motivated group that Republican politicians have actively encouraged, and one that they can scarcely afford to have split and turn on itself.

That, though, as Democrats have learned over years of internal rift, is always a danger when mobilizing angry constituencies. The Waco hear­ings exposed one more time that the fragile coalition that makes up the Republican right is itself riven with contradictions.

It is seldom understood, for example, that the Christian right is not made up of anarchists. As a group, it believes in strong federal government that can institute and enforce the repressive codes of social conduct in birth control and education that they advocate. Unlike the racist survivalist faction, the Christian fringe has no interest in retiring to some wilderness tract in the Northwest. It wants to take power in Washington and then exercise it.

When you strip down the revolutionary rhetoric coming from Congress, it isn’t hard to see what a dangerous game the GOP is playing.

If the Republican majority were seriously interested in addressing the Waco raid, then, turning to the Treasury Department’s excellent indictment of its own handling of the matter, it could seek to prose­cute the leaders of the department for dereliction of their duty. Top of the list is former Treasury head Lloyd Bentsen, a conservative Republican in all but name, whose han­dling of the raid points to a clear case of incompetence and derelic­tion, leading up to direct violation of constitutional rights.

Also, the Treasury’s report makes a powerful case against the ATF as an institution. Add to that the bureau’s recent history of sex­ual harassment cases, not to men­tion its racist “good ol’ boys” reunion. Here, sunset legislation to abolish this agency, turning its duties over to other existing law enforcement agencies, would be a welcome and most constructive step forward.

Why not abolish the ATF? That would definitely play to the anar­chist crowd, and to the money bags at the NRA. It would help carry on the sense of revolution infused by Gingrich. But it would also run the powerful risk of opening its spon­sors to charges they are soft on crime — a charge that right-wing Democrats showered on the hear­ings from the beginning. Most importantly, it would turn over the duties of the ATF to other law enforce­ment agencies, i.e., the Secret Ser­vice, something the NRA would fight hard to avoid. 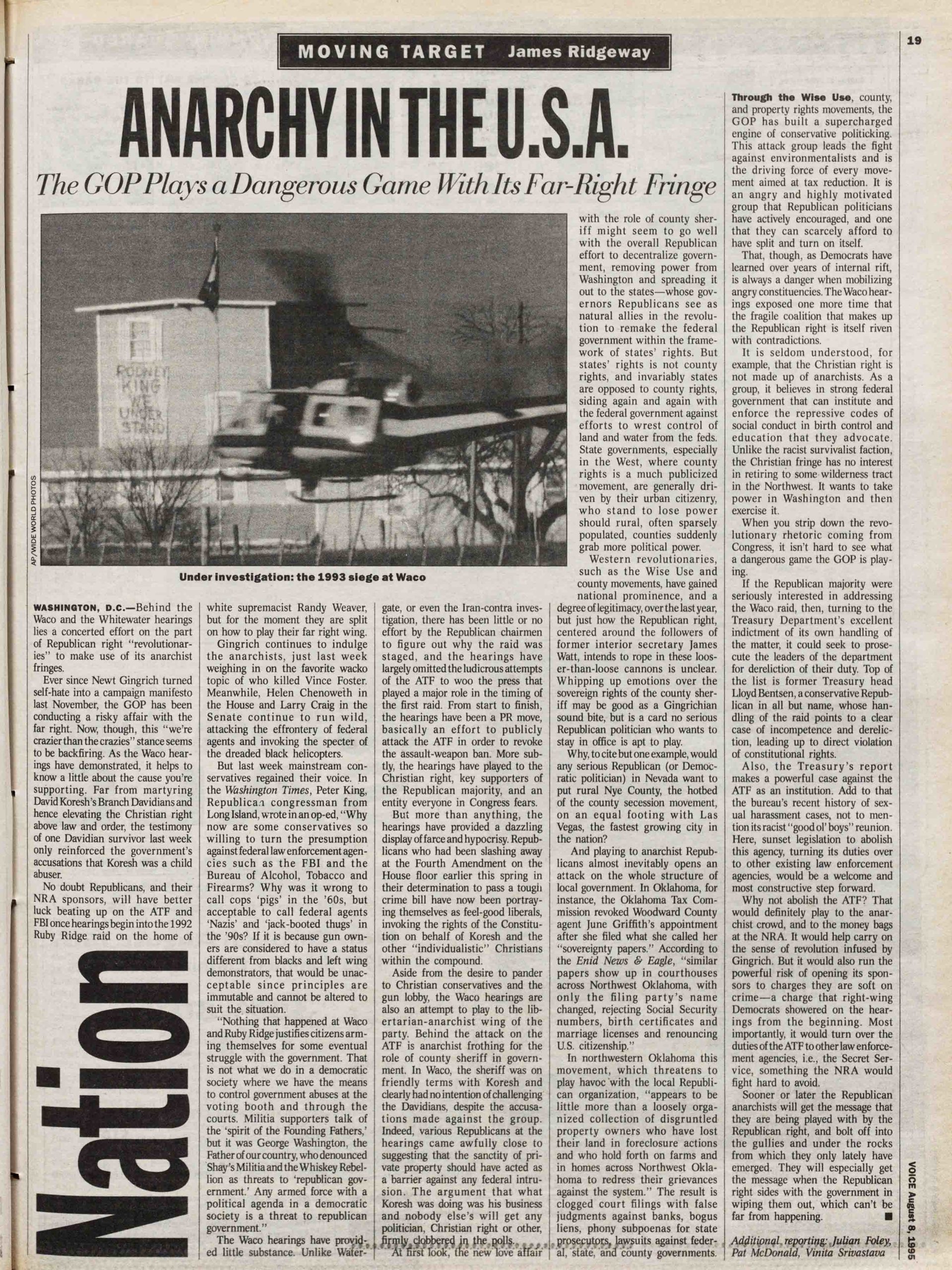 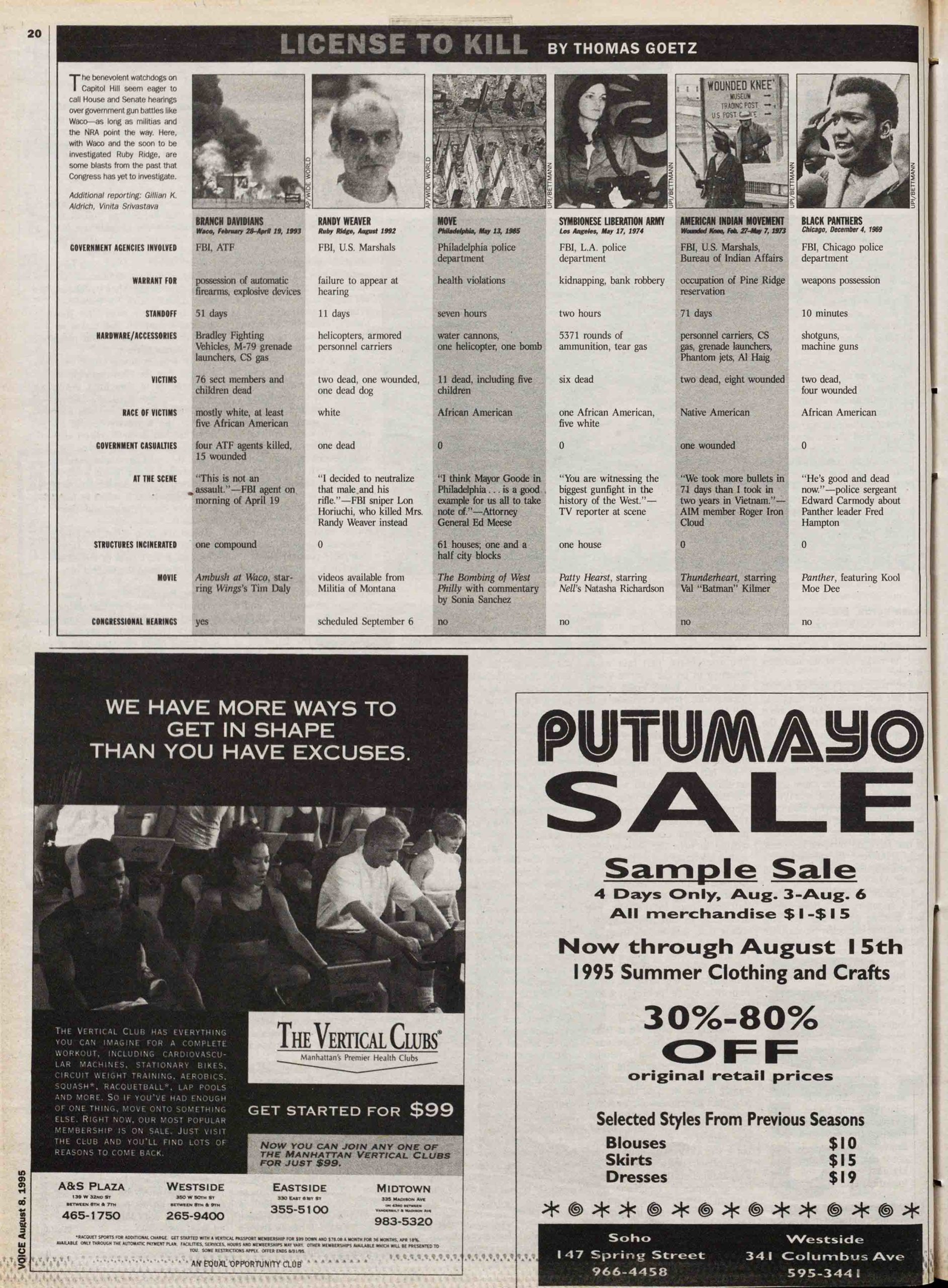