Outlaws as Oligarchs: Waylon and Willie Outsell ’Em All

Irony flourishes in an industry of schemes. For more than 50 years, country music has had a thirst for the pop charts, a thirst that has been satisfied by such men as Vernon Dalhart in the 1920s, Gene Autry in the 1930s, Eddy Arnold in the 1940s, Elvis Presley in the 1950s, and Johnny Cash in the 1960s. But in recent years that thirst became a spectacle of gaudy desperation, as country music devolved shamelessly into Easy Listening. When Charlie Rich’s “Behind Closed Doors,” the classic middle-of-the-road country song, crossed over to the pop market, country music rushed to imitate its success. The ensuing kitsch did little but alienate much of the existing country market, and things got so bad, so hideously bland that Chet Atkins, one of the people guilty of changing the music to middle-of-the-road mush, did gentle penance by apologizing publicly for what he had done.

Enter Willie Nelson and his first Columbia album, Red Headed Stranger. Made at an out-of-the-way studio in Garland, Texas, at a cost of only $3000, Red Headed Stranger was all that country music had ceased to be: hard edges and inner graces. There were people at the company whose brains puked at the thought of releasing such a record, but Willie won out by agreeing to cut his next two albums in the accepted fashion if Red Headed Stranger failed to make money. The album was released in October 1975. It hit the top of the country charts, then it went high on the pop charts, as a single from the album, “Blue Eyes Crying in the Rain” (which Elton Britt had recorded in 1945), became the biggest crossover hit since “Behind Closed Doors.” And that’s how Willie Nelson, after 17 years of moiling against the country music industry’s grain, finally took the wheel.

Willie and others whom the industry had considered freakish growths upon its Dresden-doll skin were now given credence and respect. Teeth went tight with wrath in 1970 when Kristofferson showed up in street clothes to accept his CMA award for “Sunday Morning Coming Down,” but at the 1975 awards ceremony similarly unorthodox behavior by Waylon Jennings was loudly applauded. The day of the outlaws had come.

There are true tales about many of the old-line country singers, tales of gunplay and whisky and dunes and dunes of Benzedrine and high-heeled caravans of open-mouthed girl-things, garish Iliads of honky-tonk excesses that are rarely encountered except in Don Siegel movies. But these men were never considered outlaws, for they never allowed their personal lives to tint their public images. You either stayed in the closet or you repented publicly, as Johnny Cash and Merle Haggard did. If you fucked up, the consequences were grave, as Hank Williams discovered when he was thrown off the Opry. These were the grievous angels Gram Parsons spoke of.

Nothing those old-timers did pissed off the industry as Kristofferson had in 1970 with his sins against decorum. There he stood, the most successful songwriter of the season, and he just didn’t seem to give a fuck. This surly yanking at the paternal dewlap, this was outlawry of a kind that none of the old-timers would have dared. But you can’t throw someone off the Opry if he’s never cared about being on it. Within a year, Kris had become a star beyond reprehension. His “Me and Bobby McGee,” which had been a country hit for Roger Miller, became a pop hit for Janis Joplin in the summer of 1971, and when Kris’s second album, The Silver-Tongued Devil and I, was released that same summer, it crossed over to the top of the pops.

Five years earlier that could not have happened, but by 1971 the cultural paradigm was changing. White suburban punkdom pushed aside its pretensions of social conscience as one would a copy of “Raised Skirts and Bare Buns” after jerking off. The ’60s were an embarrassing diary in the eyes of the ’70s, and Black Sabbath and Lou Reed were the sound of that diary burning. In a way, Kristofferson was also. Kids who a few years before had affected a vicarious identification with the culture of colored folk now began adopting the ways of the redneck eidos.

When Willie Nelson started performing with younger, rock-bred people on their mutual Austin turf in 1972, the thrill of benediction was felt. Willie convinced his friends, such as Waylon Jennings and Tompall Glaser, that these long-haired kids were a great country audience, and they too began performing for the kids. Austin became to country music of the ’70s what San Francisco was to rock of the ’60s, a college town turned secondary music capital, and in Michael Murphey’s “Cosmic Cowboy” the scene found its anthem. Willie and Waylon started making music as they had rarely done before; albums such as Waylon’s Honky Tonk Heroes and Willie’s Phases and Stages ooh’d and yelled with freedom.

Staring plainly if numbly at the overwhelming success of Willie’s Red Headed Stranger, the country music corpus could no longer ignore the weird beast that had grown within its stomach, so it accepted it as it has always accepted success. Industry people looked back on Kristofferson without anger and told anyone who would listen that they knew Willie way back when and what a good old boy he was.

These guys are oligarchs now, not outlaws, and to consider them outlaws in 1976 is silly except as nostalgia. A battle was fought and the good guys won, it’s as simple as that. The effects of the victory are many and glorious. Willie Nelson, the William Carlos Williams of neon, hadn’t had a Top Ten country record since 1962, and now he’s the most popular country singer in America. Waylon Jennings, who had always had hits but had never really let loose, is now making the best country music the world has heard since the ’50s. Tompall Glaser, the most innovative and knowing country artist of recent years, is finally getting some of the recognition due him. And, perhaps most important, a lot of the older artists who had been seduced into a more middle-of-the-road sound are easing back toward the source. George Jones told me last month that his next album will be done without orchestral frills or any other sweetening, and I think when he and producer Billy Sherrill make that album, more people will become aware of what George Jones is: the greatest singer alive.

But the romance that has replaced the reality of the outlaws is starting to give off an ominous, electric odor. An outlaw establishment threatens. Texas Music, a slick Dallas monthly which published its first issue this month, will not publish any negative comments about the outlaws, a policy that reeks of the ways of such established fluff-rags as Country Song Roundup and Music City News. During the early months of 1976, industry people cased out Austin, and it is more than probable that a less manicured extension of the music establishment will be seeping into Texas before too long. I shuddered when RCA mailed out plastic, made-in-Korea vests with the Waylon logo stenciled on their backs. Will personae of outlawry be affected like so many Nudie suits? Will new teeth gnash when Ernest Tubb shows up in suit and tie to accept his award of recognition from the Outlaw Music Association?

Some came out of the outlaw scuffle empty-handed. Bobby Bare tried his best to fit in with the desperados, but made the mistake of loading his pistols with Shel Silverstein songs. Billy Joe Shaver, one of the most gifted songwriters involved in the scene, went berserk with his own image and his recent music resembles a large, bragging saddle sore. Tom T. Hall, in the midst of it all, went and recorded a song that included the line, “I love little baby ducks.” David Allan Coe, the Joey Gallo of Country Music, remains an acquired taste, like Carstairs and Coke.

Willie, Waylon, Tompall, and the others who fought and won the war against blandness love country music as much as Hank Williams did, and they make country music better than Hank did. That’s why I hope they don’t end up heading down the wrong highway, or find themselves like John Lee Hooker, totemized on a stage before a mass of ceremonially appreciative trails.

Besides, there is work still to be done. I suggest that all pardoned outlaws unite to wreak God’s will: Amnesty for Jerry Lee Lewis! 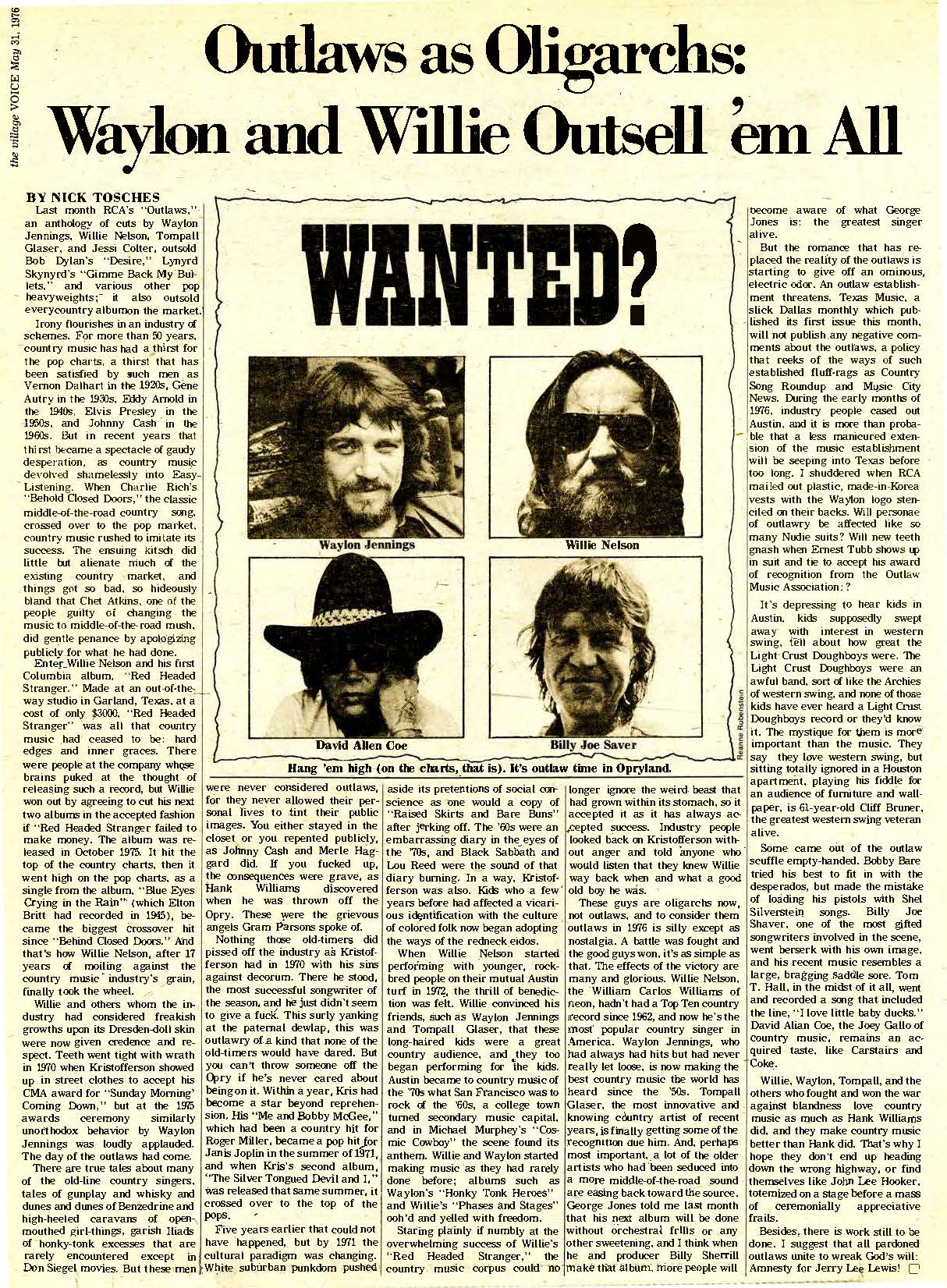