Chicago in August: Prelims are Bloody

Hubert Humphrey made his pact with the South and John Connally became his Strom Thurmond.

The boomlet for Teddy Kennedy turned out to be a fantasy of Bobby’s orphans.

The cops chased, Maced, tear-gassed, and shot blanks at the kids who were in Lincoln Park an hour after curfew.

All over the city people were randomly stopped and questioned.

Tom Hayden was arrested on charges which three witnesses including two lawyers insisted were false.

By 3 a.m. Tuesday the liberals had been routed at the convention, the kids had been repulsed on the street. Everywhere you walked, from midnight on, there were plainclothesmen. They frisked you with their eyes like whores strip potential clients, and if you looked the least bit suspicious they tailed you as you continued down the street. Almost every noise was martial: fire sirens, the squawking of two-way radios, cop cars racing from place to place, the idle chatter of police on duty.

We were with Tom Hayden when he got arrested, at 11:55 p.m. in front of the Hilton Hotel. He had come by for a few minutes intending to go straight on to Lincoln Park, when he ran into some friends who were staying in the hotel. They invited him up to their room, but as Hayden sought to enter the hotel through its revolving doors a middle-aged man in street clothes stopped him.

“We don’t want this man here,” he told Hayden’s friends.

“But he’s our guest,” one of them answered.

“No, he’s not welcome at this hotel,” the security officer insisted.

One of Hayden’s friends followed the security officer into the hotel to complain about the decision to his superiors. For a few minutes Tom stood around talking with a small group of people. Then suddenly, Ralph Bell, a plainclothesman dressed in khakis and a red and yellow checked shirt, came running down Michigan Avenue yelling, “He’s our man, arrest that man.” A uniformed policeman who had been directing traffic grabbed Hayden and threw him on the ground. He was arrested, according to the arrest form at the 114th Precinct Station in Chicago, because he “called the police names and spit at them.” We were present during the entire scene and we are certain that Hayden never called the police a name. Since he was grabbed from behind it would have been difficult for him to spit at the arresting officer.

It is clear that the moment that Hotel Hilton’s security officer saw Hayden he decided to call the police. Since this was Hayden’s second arrest of the day on extremely tenuous charges it is apparent that the Chicago police have decided to harass the Mobilization leader throughout the convention week.

For three weeks both Hayden and Rennie Davis have been followed 24 hours a day by detectives. Hayden says that his tail has repeatedly threatened to kill him. But the police’s harassment of the Mobilization is far more extensive than that. Photographs of Hayden, Davis, and other key figures in the radical movement have been distributed to all hotel doormen in the city, and at bus terminals, train stations, airports. (The “Red Squad” of the Chicago police force is one of the most efficient in the country, according to people who live here. During a demonstration against the House Un-American Activities Committee three years ago, for example, policemen took pictures of every participant and put them in a film of people who were likely to assassinate the President or Vice-President of the United States, the Chicago American reported at the time.)

Now the harassment seems to extend to people who are just casually involved with the radical movement. A taxi driver who took a young couple to the office of the National Mobilization Against the War in Vietnam was questioned by police about the conversations he had overheard. It is widely assumed here that the telephones of everyone connected with the Mobilization are tapped.

We got to the precinct station where Hayden was booked and were let inside because we had come to bail him out. We over­heard the police mocking the kids they had arrested. “We had to fumigate this place after we led all those animals through,” said one. An officer apparently nicknamed “Killer” who carried a revolver on each hip and smoked a long cigar, was complaining that he had been scheduled to screw two airline stewardesses that night. “I’m going to kill those Yippies who lost me that good lay,” he said. Ten minutes later be came back into the room. “Well, one of them said she would meet me later on. I guess I can wait till tomorrow night to get me some action.”

We stood around the precinct station for two hours waiting for Hayden’s bail to be set. Finally, one of the police told us that the procedure would take at least two hours more while Hayden was fingerprinted. “But he was already arrested once today,” Newfield said. “Oh, we didn’t know that,” the officer answered. “Since that’s the case we’ll bring him down here right away.”

We spent the next hour walk­ing with Hayden through down­town Chicago, trying to dodge his tail. Every few minutes we would hear fire trucks setting out to chase down some false alarm that bad been set off by the hip­pies. After one particularly com­plicated trek through back alleys and down side streets we were stopped by two detectives who got out of their car to ask u where we were going. It wasn’t clear whether they recognized Hayden or suspected any strang­er who walked along an unusual route. James Ridgeway of the New Republic showed the detec­tive his White House press pass and Newfield took out his official press pass to the convention. “We’re just trying to show this friend of ours the back streets of Chicago,” he explained.

Walking down Clark Street we met a black pimp and two black whores, all of them wearing McCarthy buttons. The chicks were wearing gaudy pink sun­glasses. “Say, man, you want to meet some girls?” the pimp asked, “No, not tonight man,” said Hayden, “I just got out of jail.”

“Oh yeah, what jail?” the pimp asked. “The 11th Precinct Station,” Tom replied. “Man, I know those parts real well. I’ve been in every jail in this city,” the pimp said.

At about 3:30 Tom got into a taxi, hoping to evade the tail who threatened to murder him. We went hack to the lobby of the Hilton Hotel where we ran into a weary and depressed Fred Dutton, former aide to RFK and JFK. Dutton told us that he saw no hope for stopping Humphrey. He had just spoken to Edward Kennedy, he said, he was convinced that the movement to draft the Massachusetts senator was a pipe dream.

Dutton, who surely must have felt that it Robert Kennedy had lived this convention would be nominating him, showed his despair with the events of the evening. He had been listening to Nick Von Hoffmann, a reporter for the Washington Post who bad been watching the police beat the Yippies on the Near North Side. Von Hoffmann was visibly angry. “I was over at the pig palace watching the pig master at work,” he said. “But I got too disgusted so I decided to watch his hired sadists on the beat. You know that they don’t make arrests any more. They can’t be bothered with lawyers, courts, any of that stuff.”

“Yeah, they just maim people and leave them hidden,” added a delegate from New York.

Dutton turned to Von Hoff­mann and told him passionately that “it’s up to you guys to keep reporting that stuff. There’s not much we can do any more — not the politicians, not even the kids. You have to keep telling the public what’s going on.”

Meanwhile, a cherubic-faced teenager walked between the drunks and the celebrants, try­ing to distribute Ted Kennedy for President leaflets. There were few takers. 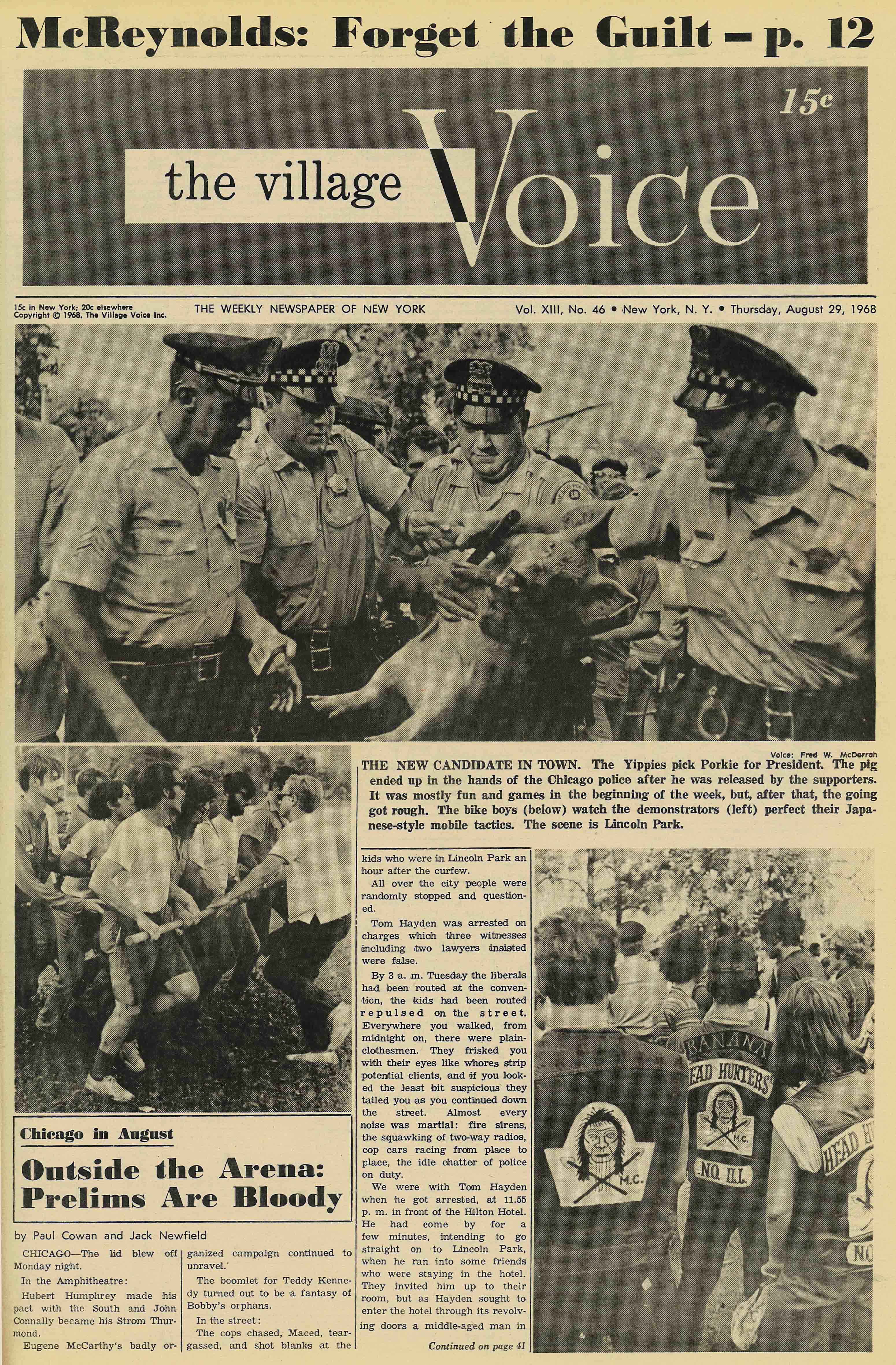 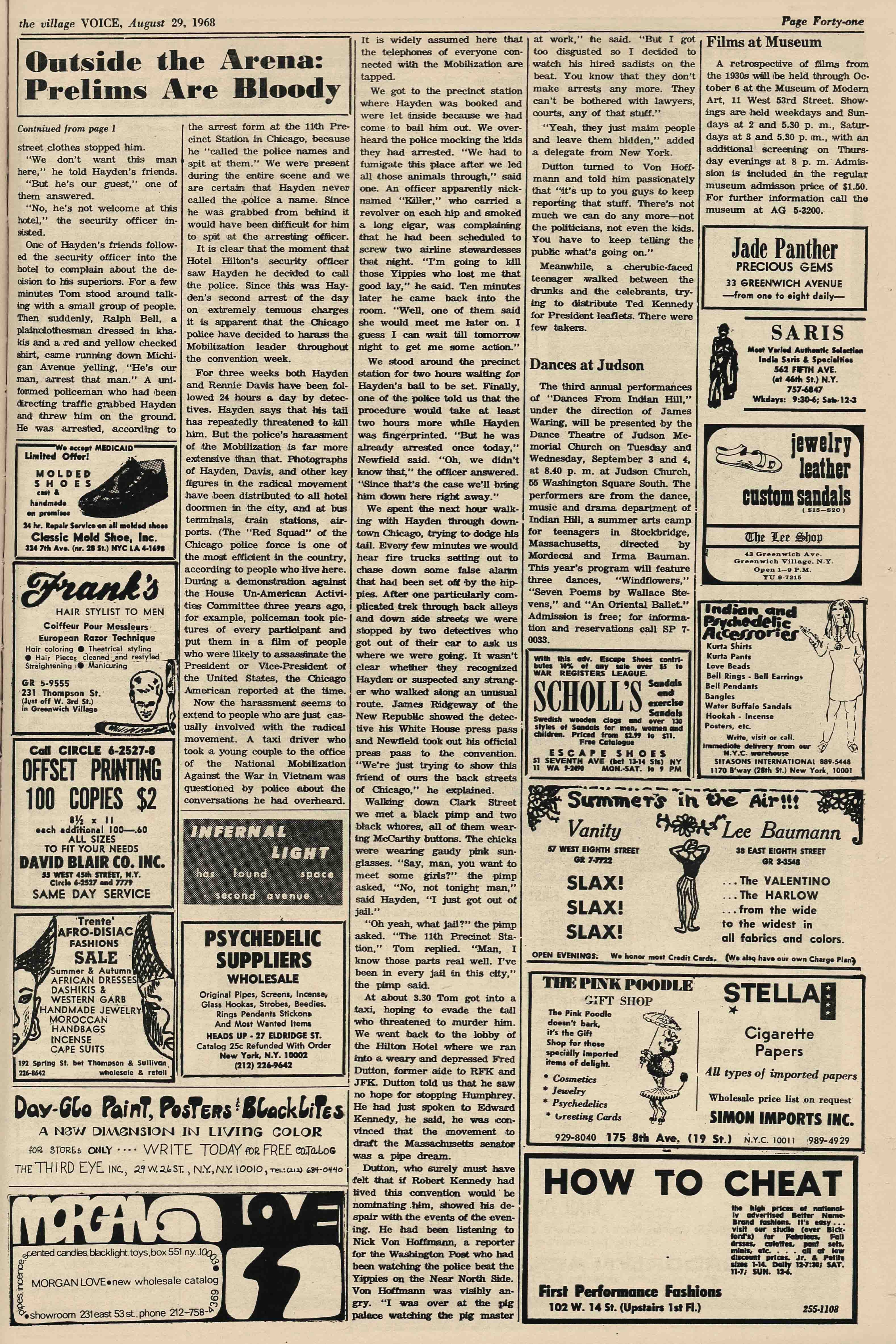