Marty Scorsese is laid back. Literally. It is 5 o’clock of a Sunday afternoon and Marty is leaning all the way back into a Hotel Pierre couch. The television is soundlessly beaming Lonely Are the Brave into the suite’s living room, while one of the various sound-producing machines that travel when and where Scorsese does is playing Italian popular mu­sic — preparation, perhaps, for Mama Scor­sese’s birthday celebration later that night. As the rest of the city is coming out of lazy Sunday, Marty is having his wake-up cup of coffee. “I hope the caffeine works,” he says.

One expects everything of Marty Scorsese: He is that peculiarly American phenomenon, the mass-cult figure. Scorsese occupies a unique niche in the Hollywood hierarchy: He is revered by both the industry and the crit­ics, as an extremely personal, highly idiosyn­cratic director who is still somehow in touch with the street. Scorsese is always mentioned as part of the New Hollywood litany, but he is also, almost inexplicably, apart: Despite a filmography that jumps over genres and styles with deliberate eclecticism, his movies always read autobiography. If New York, New York failed dismally at the American box office, it is not because the picture over­whelmed Scorsese: It is because a particular­ly abrasive part of Scorsese overwhelmed the movie. Musical fans simply could not go in and have a good time.

What one didn’t expect is The Last Waltz. The Last Waltz is a rock-concert film, a cine­matographic record of the Band’s final stand at San Francisco’s Winterland in the fall of 1976. Before it only hacks were supposed to do rock-concert films. The last time Marty touched the stuff was back in his NYU days, when he edited first Woodstock and then Medicine Ball Caravan. He may talk about how important these two projects were for his artistic development, but the line on opening day was that The Last Waltz just wasn’t the sort of thing a Great American Director should do. It’s not Important enough. It could only have been done as a lark.

“I shot the whole thing incognito,” Marty says. “I was supposed to be resting, taking time off between shooting and editing New York. It was all very secret. Irwin Winkler [New York, New York’s producer] didn’t know I’d done it until it was over, and then, when he found out, he was furious. But all during the concert, it was like a rumor — he’s here shooting, he isn’t here shooting. I’d shot 22 weeks on New York, New York, prepared this film in three weeks, shot one day, and then I sat down. I just sat, for four hours, downstairs at the Miyako Hotel. I couldn’t get up. It was perfect.

“We went in thinking, we’ll document the Band’s last concert and maybe we’ll get something, maybe we won’t. Then when the footage came back and we looked at it on the KEM, I just said, ‘Wow. This is fantastic. We’ve got a movie.’ ”

Things do not always work out as planned. Between Thanksgiving of 1976, when the Band played at Winterland, and the release of The Last Waltz this April, just about noth­ing Scorsese planned on did. New York, New York failed in the States. (Recent indications are that the film is doing quite well abroad, and will probably recoup its investment.) The Act, Liza Minelli’s stage vehicle that Marty attempted to direct as a sequel to his dark, ferocious musical, floundered on the road, and Scorsese was replaced by an un­credited (but highly publicized) Gower Champion. Worst of all, his marriage to writ­er Julia Cameron broke up shortly after the birth of their daughter.

“The movie was therapy,” Marty says. “It was the only thing that held me together.”

The Last Waltz was not just work; it was a special kind of anchor. Scorsese’s love affair with rock and roll, his commitment to music as a form, is at least as deep and abiding as his love and commitment to film. He has always used music in his films, knowing just what the kid would listen to in Alice Doesn’t Live Here Anymore, manipulating the track of Taxi Driver with disc-jockey ease. The cultural conflict in Mean Streets is most directly expressed as a war between two styles of music, Italian and rock. Indeed, until Jay Cocks read him the Raymond Chandler quote from which he drew the final title, Mean Streets was called Season of the Witch.

“The music was just always there,” Marty says, and when he says it, he means just about all the music there is. His traveling tape collection includes Don Giovanni, his ra­dio is tuned to rock and roll.

The Last Waltz was conceived as “an op­era.” Scorsese borrowed the set of La Tra­viata from the San Francisco Opera, and he and head cinematographer, Michael Chap­man, sat down with a set of lyrics to each of the songs, scripting line by line color changes intended to emphasize the content of each musical moment. If Scorsese’s fiction films have musical structure, then The Last Waltz, with its meticulous script and preplanned camera angles, was constructed in the same manner as his narratives.

Unlike most rock-concert pictures, The Last Waltz is an extremely formal film. Com­ing off New York, New York, Marty shot the movie with the same dark, totally interior look. This is a movie in which daylight is never seen, in which the world is totally artificial, limited to stages and studios. Scorsese managed to put crab dollies on the Winterland stage in places that would not obscure the audience’s view. With Bill Graham’s per­mission, he dug through Winterland’s floor to anchor a tower that could hold Vilmos Zsigmund’s position at the back of the hall, providing wide-angle long shots Scorsese was afraid he would otherwise not be able to get. Each of the cameramen on stage had specific instructions, including tracking directions, although little more than six inches of track­ing space were available. Only David Myers, who can be seen periodically floating around the stage, had hand-held mobility. Scorsese gave Myers a single, simple instruction: Nothing Myers shot could look hand-held.

As important as the highly polished shoot­ing style was the decision, made early on, to refrain from cutting back to the concert audi­ence. Indeed, the audience is almost ab­sent — we hear them applauding, and every once in a very long while one of Zsigmond’s long shots includes silhouettes of the front rows. This is no Woodstock: The point of The Last Waltz is the music, not the listeners.

“I had the feeling,” Marty says, “that the movie audience could become more involved with the concert if we concentrated on the stage. Besides, after Woodstock, who wants to see the audience anymore?”

The result is a movie that is about music and musicians, about living the life of rock and roll. In addition to the concert footage, Marty interspersed three studio-shot num­bers, which gave him a chance to practice his pyrotechnics, as well as his own interviews with members of the Band, which give the film its rough balance. Although he never met any of the Band before agreeing to shoot the concert, he and Robbie Robertson almost immediately became close friends. Robertson actually moved into Scorsese’s Los Angeles house.

Scorsese denies that his friendship with Robertson greatly influenced the film, but The Last Waltz does make clear that Robbie Robertson was the leader of the Band. For one thing, he’s an articulate musician. For another, he has a ton of stage presence, which translates perfectly onto the screen. And, of course, he does play lead guitar.

True. But it is also true that Marty, who may be right when calls himself “the world’s worst interviewer,” functions best as a documentarian when dealing with subjects he knows intimately.

It is not just that Scorsese knew where his cameras could go but he was not embarrassed to let unkind moments intrude upon the general celebration. (Compare, for example, the treatment of Ronnie Hawkins in Last Waltz with his treatment in Renaldo and Clara: In Scorsese’s film, Hawkins is clearly a man far out of his depth when trying to front the Band he formed. There is no question, watching him, that he doesn’t belong in this company. In Dylan’s disaster, Hawkins is taken at false face value. At the same time, while this is ostensibly a film about the band, Scorsese’s editing makes no bones about how much a Dylan event it becomes the moment the singer walks on stage. Everything else disappears behind his presence, and Scorsese, despite his friendships and commitments, does nothing to hide or minimize this effect. It is not merely the best rock-concert movie ever made; it is as intensely personal as anything Scorsese has done.

Late in the film’s editing, at editor Jan Roblee’s suggestion, Scorsese placed the footage of the Band’s last song — Holland-Dozier-Holland’s “Don’t Do It” — at the beginning of the film. The concert thus becomes a flashback, while the interviews and studio shots are a meditation on the half-life of collective efforts and the weariness 16 years of road life can bring. Marty says the entire movie is about “Stage Fright,” but a more appropriate metaphor is suggested when the Band, obviously stoned, attempts “Give Me That Old Time Religion.” The improvised version is at once completely a Band song in its modalities, harmonics, and instrumental breaks, and a lethargic failure, falling apart before anyone can finish. “It’s not like it used to be,” someone says, and that seems to be the point of the film. Having become the Band, the members are, at the point of breaking apart, undefined by their success. They are no longer able to produce the work that sustained them.

“I’m slowing down,” Marty says. “I mean, I have projects, but none of them are ready yet. They’ll have to wait until I am ready or else they won’t get done. I want to get away from big budgets. I don’t know what I’m going to do next. But I can’t keep up the kind of thing I’ve been doing the past two years. I mean, I’ve even read in The Village Voice how I left New York. I never left. I’ve just been out there working, and then on the road with The Act, and then editing this one. I’ve got to find a place here, now. I mean, I can’t keep living in hotels…”

Marty Scorsese is no longer laid back. He is standing up now and serious. “I really have to think very carefully about what to do next. Because I’m convinced I have very little time left — physically. I just believe it. And I’ve got to do what’s important — whether it’s a rock-concert film… or a 16mm documentary… or nothing.”

He turns and looks at the television.

“I don’t know what there is to write about me anymore. Just where I am, now, I guess. It’s like the Band — just because the Band broke up doesn’t mean the music’s over. It’s just a hiatus, a stopping, before something different, more complex, the next step.”

Martin Scorsese looks out the window. He is waiting for the night. 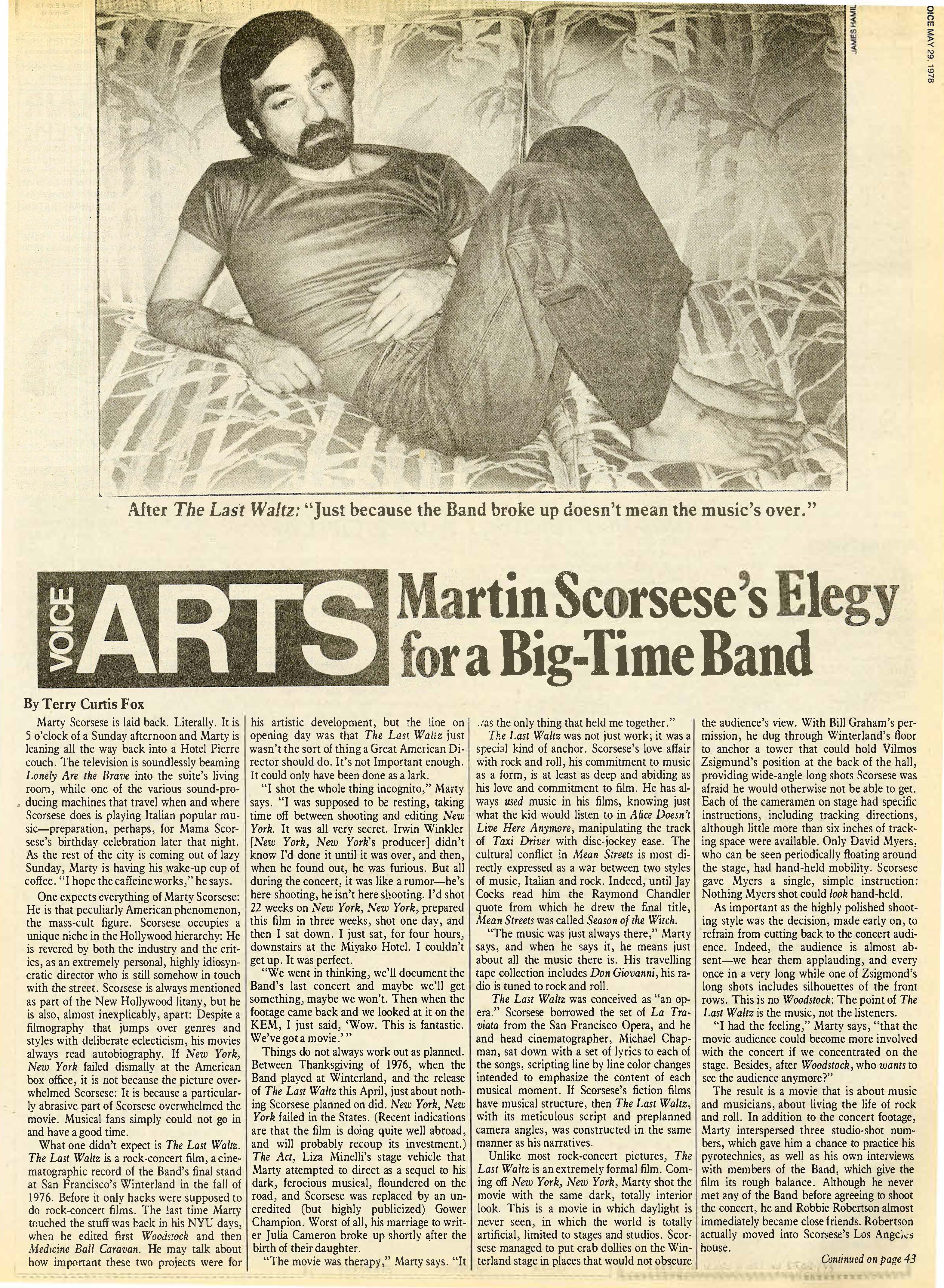 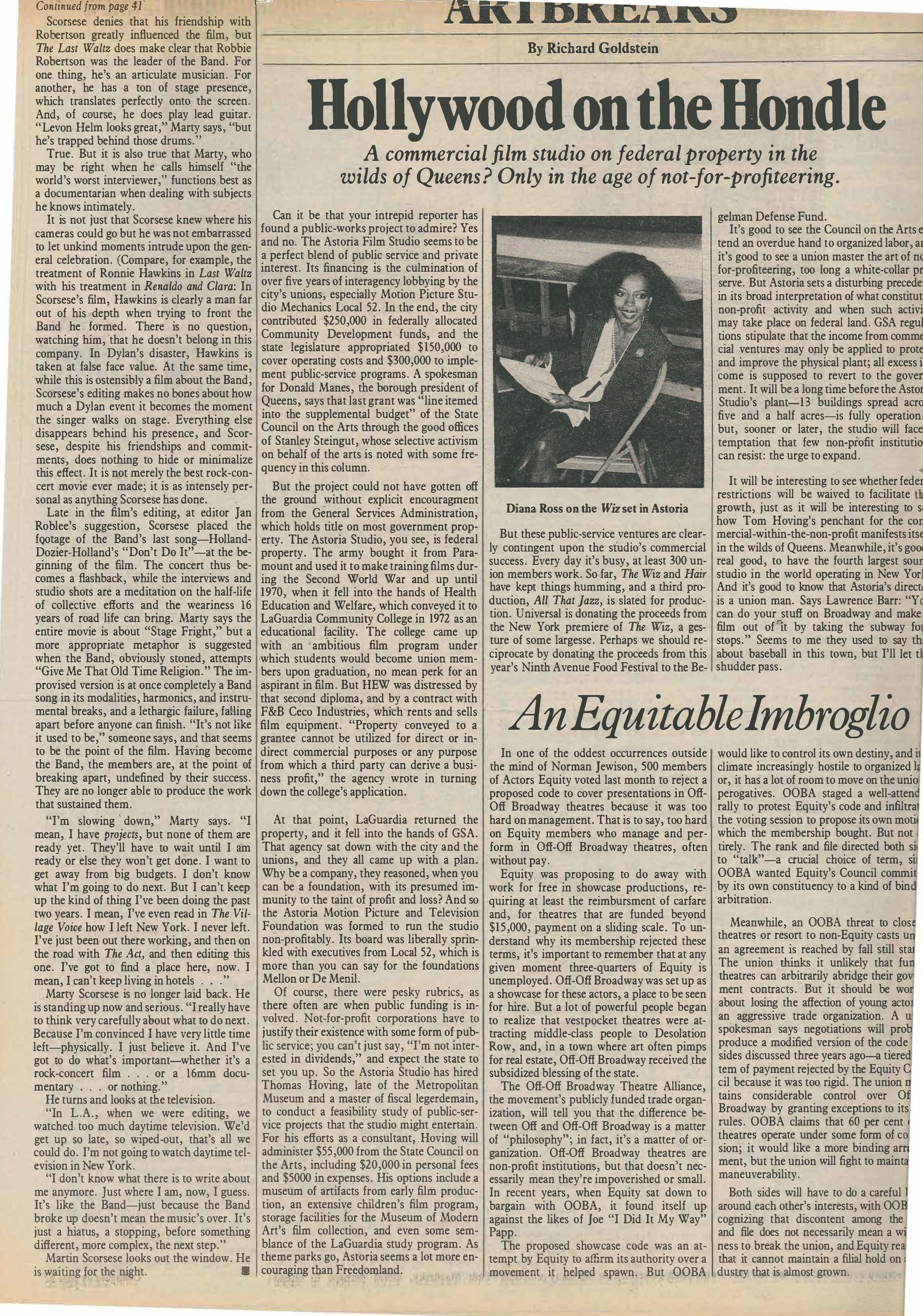