Four years ago a thin, aquiline-faced boy of 19 got off the subway from Hibbing, Minnesota, to come up for air in the Village, bearing with him no more than a battered guitar and an offhand way of singing that reminded some people of Woody Guthrie.

American folk music has never been the same since. Three of his Columbia LP records have made the charts. His songs have made him synonymous with the whole new topical folk-song movement. Kids try to tear his clothes off at Carnegie or Philharmonic concerts. And just recently he romped away with a whole Les Crane show. All of which makes of Bob Dylan, as the folks down home might say, one of your living legends.

On the eve of Dylan’s fifth LP release, the press finally managed to corner the young singer-poet in an old stone house some miles outside Woodstock, New York. Dylan, hair shooting up like a shock of wheat, boots shined, face as pale as the winter snow outside, had consented to answer all those deep, meaningful, searching questions he’s been bombarded with by reporters and TV interviewers for years. The following is a transcription of what took place between Dylan and the large numbers of newsmen on hand:

Q: Bob, when you first started writing songs, did you write like Woody Guthrie?

A: Like I’m from Minnesota. Did you ever grow up in Minnesota, or hear Woody Guthrie? I didn’t hear him until I was around a college.

Q: Who did you write songs like before that?

A: Ever hear of Gene Vincent? Buddy Holly?

Q: Then you had a rock and roll band in high school.

A: I had a banana band in high school.

Q: So then you heard of Guthrie and he changed your life?

A: I heard of Odetta first…

Q: Then you heard of Guthrie and he changed your life?

A: Then I heard of Josh White…

Q: Then you heard of Guthrie…

A: Then I heard about those riots in San Francisco…

A: An’ I missed out on meeting James Dean so I decided to go meet Woody Guthrie.

Q: Was he your greatest influence?

A: I don’t know that I’d say that, but for a spell the idea of him affected me quite much.

Q: What about Brecht? Read much of him?

A: Yes, I’ve read his tiny little book, too.

Q: How about Hank Williams? Do you consider him an influence?

A: Hey look, I consider Hank Williams, Captain Marvel, Marlon Brando, The Tennessee Stud, Clark Kent, Walter Cronkite, and J. Carrol Nalsh all influences. Now what is it — please — what is it exactly you people want to know?

Q: Tell us about your movie?

A: It’s gonna be in black and white.

Q: Will it be in the Andy Warhol style?

A: Who’s Andy Warhol? Listen, my movie will be — I can say definitely — it will be in the style of the early Puerto Rican films.

A: Allen Ginsberg. I’m going to rewrite it.

Q: Who will you play in the film?

Q: Who is that going to be?

Q: Will it have significance? That is, some hidden philosophical meaning or message? Say, like Albee’s play, “Tiny Alice”?

Q: No. ”Tiny Alice.” Let’s drop — Bob, do you have any philosophy about life and death? About death?

Q: Well, Bob, don’t you have any feeling about Albee’s work?

A: What’s he got to do with me? I dig Blind Lemon Jefferson.

Q: What goes on between you and Joan Baez that doesn’t meet the eye?

A: She’s my fortune teller.

Q: Bobby, we know you changed your name. Come on now. What’s your real name?

A: Philip Ochs. I’m gonna change it back again when I see it pays.

A: I don’t really read that much. I hate to be motivated. I’d rather read when I’m bored. Then anything will do.

Q: What about your friends the Beatles? Did you see them much when they were here?

A: John Lennon an’ I came down to the Village early one morning. They wouldn’t let us in the Figaro or the Hip Bagel or the Feenjon. This time I’m going to England. This April. I’ll see ’em if they’re there.

Q: Bob, what about the situation of American poets. Kenneth Rexroth has estimated that since 1900 about 30 American poets have committed suicide.

A: Thirty poets! What about American housewives, mailmen, street cleaners, miners? Jesus Christ, what’s so special about 30 people that are called poets? I’ve known some very good people that have committed suicide. One didn’t do nothing but work in a gas station all his life. Nobody referred to him as a poet, but if you’re gonna call people like Robert Frost a poet, then I got to say this gas station boy was a poet too.

Q: Bob, we understand that you’re writing a book.

A: Yeah, it’s a funny book. I think it’ll come out by spring.

Q: Bob, to sum up — don’t you have any important philosophy for the world?

A: I don’t drink hard liquor, if that’s what you mean.

Q: No. The world in general. You and the world.

A: Are you kidding? The world don’t need me. Christ. I’m only five feet ten. The world could get along fine without me. Don’t cha know, everybody dies. It don’t matter how important you think you are. Look at Shakespeare. Napoleon. Edgar Allen Poe, for that matter. They’re all dead, right?

Q: Well, Bob, in your opinion, then, is there one man who can save the world? 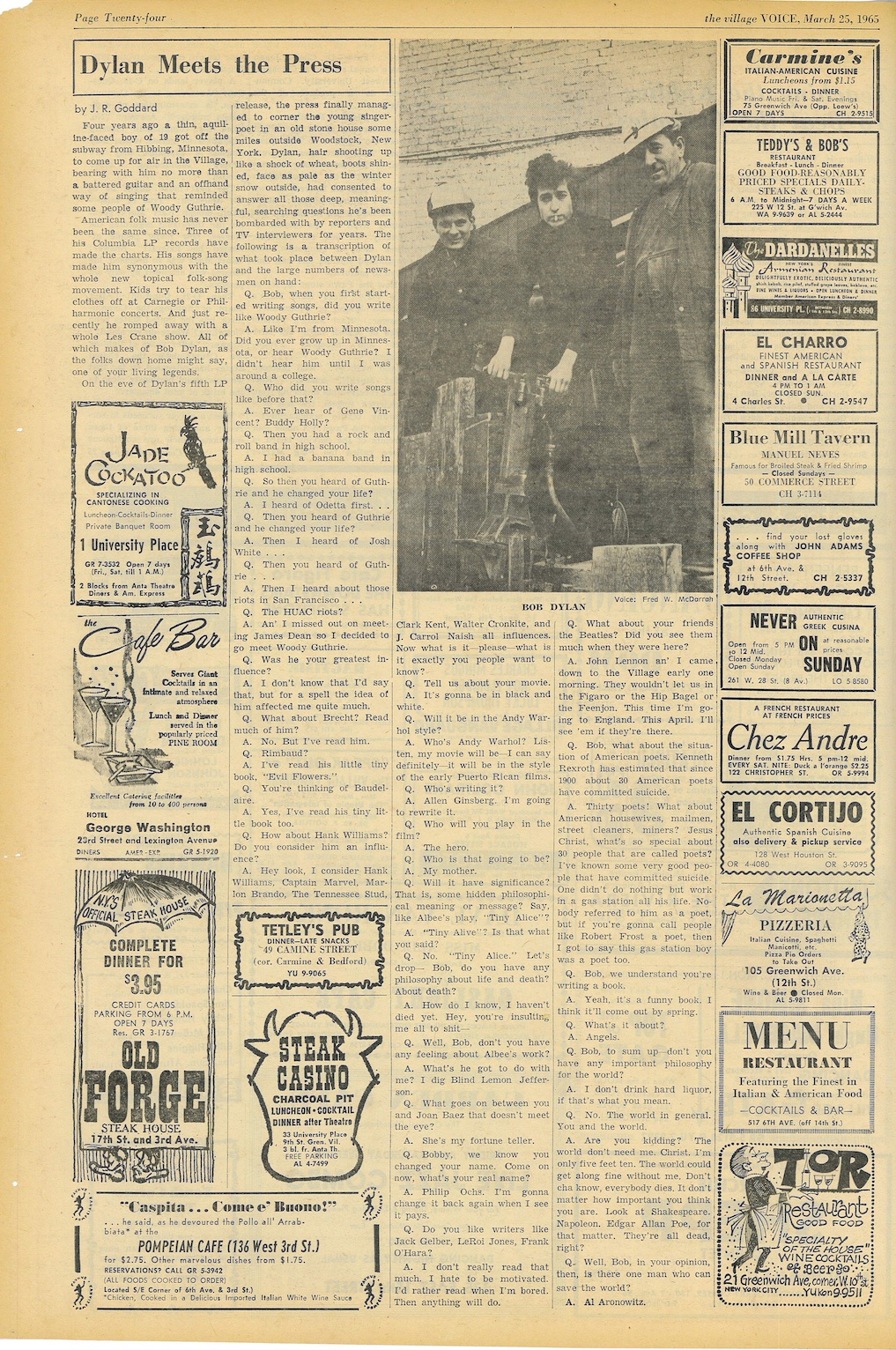