As far as I’m concerned, 14th Street represents the limit of the civilized world. Now don’t get me wrong: it’s not above but below this thoroughfare that the hin­terlands begin, among the charming streets that fit within no grid, where it always seems colder than any other part of town. Yes, it’s about time that someone said out loud what New Yorkers who live north of Luchow’s tell each other privately: I wouldn’t mind hearing that I never had to go below 14th Street again.

Let’s not even speak of Soho, a pre­posterous address, which for some years has been fit only for those who maniacally insist on behaving as though they were characters in a Paul Mazursky movie, to say nothing of Tribeca, Nobeca, et al, all those doleful havens for stockbrokers with the most desperate symptoms of mis­placed nostalgie de la boue, and other lost souls. Luckily, these dismal locations whose inhabitants live not in apartments but in “spaces” can be avoided altogether. It took me a while to realize this. Of course I never went down there of my own free will, but I used to reluctantly accept occa­sional invitations to those parts. After half a dozen miserable expeditions I decided once and for all that nothing would ever make me return to Spring Street. After all, one might as well go to, say, Cincinnati: it’s easier to get there, the food is better and cheaper, and the art shows infinitely superior.

Of course, one has to learn to say no. If you live uptown and are troubled as I once was by discommoding requests to throw away a day of your life (it always takes up an entire day, what with traveling time and brooding before and after), here is the strategy to follow: If you discover that a new acquaintance actually lives in that region, or if a previously trusted old friend betrays all standards of deportment by moving there, do not hide your dismay. Simply announce, sadly but firmly, that you will not ever, ever visit, although you are perfectly willing to continue the rela­tionship as long as the Nobeca resident agrees to travel uptown. Be generous: offer to meet at a midtown restaurant, by way of compromise. If your acquaintance timidly insists, or shamelessly begs, that you make just one exception, all you need to do is to joke about it. Any joke will do, even a recycled one. “Me, go down to Nobeca! Why I’d just as soon go to Cincinnati!” These people are socially insecure and they will laugh with you while they’re secretly wondering whether it wasn’t a mistake after all to move down there.

But the Village is another matter. Not­withstanding how carefully one plans, the Village, East and West, cannot be avoided in perpetuity. First of all, among the eight million (plus or minus) stories in this naked city, at least several hundred thousand take place in the Village (that area has a particularly high concentration of stories since the apartments tend to be small and overcrowded), and despite all precautions, some of them are bound to be those of close friends. No matter how careful you are, you’ll wind up being obliged to go there several times a year.

Don’t even attempt any Nobeca-type strategy, that’s worthless in this instance. If you try to palm off an invitation with an old Cincinnati joke, you’ll only lose a good friend. No, these people are too polished for that sort of thing. There’s no point in laughing since Village inhabitants are not only secure about their address, but, in­deed, they themselves exhibit subtle but unmistakable compassion for those poor uptown squares who live in exile from what Villagers consider the city’s socio-­cultural heart.

So every once in a while, against all of your better instincts, you board a taxi headed downtown. You try to ignore the driver’s glee when you give him the ad­dress on Perry Street and he chuckles because he’s adding another digit to his bank account after doing a quick calcu­lation of the number of miles he will cover getting down to Sheridan Square and then endlessly circling the area looking for Per­ry Street. Naturally, there is a “No Smoking — Driver Allergic” sign in Son-of-Sam lettering neatly taped to the seat, and you spend the half-hour ride observing the effect of the collapse of your smoke-starved lungs while you ponder the cruelty of life in the naked city, enduring the driver’s cheerful chitchat about how these goddamn one-way streets are always going the wrong way, but we gotta be getting close to Perry now,” while your sight is becoming impaired as a result of your hypnotic stare at the ever growing figure on the meter.

And when you finally arrive, it’s not as though anyone will be grateful. No! For those who live there, the Village is a destination, and you’re made to feel that you should be grateful to have been admitted. No one will emit the slightest expression of appreciation for the fact that you’ve torn yourself away from the real world and braved the perils of the elements and of financial destitution to go and drink jug wine or its equivalent in an eight by 10 living room with an exposed brick wall or its equivalent.

What is it about that area that makes people who seem perfectly rational in ev­ery other way want to live up to tradition of living down? Why are the seats never comfortable in Village apartments? Why are the chairs too hard and the couches too low? Why are the dining rooms too small and always overheated? Why is the plum­bing invariably inadequate and noisy? Why are there never locks in the bath­room? Why would anyone prefer to live in a neighborhood with no Central Park, no museum, no comfortable movie theatre, no normal coffee shops, and no available taxis as you discover when you walk back down the five flights of stairs from your friend’s apartment and stand on a drafty corner for 45 minutes while the only vehicles driving past you have New Jersey license plates and are filled with hordes of beer-swilling youngsters who yell ob­scenities at you as they cruise by.

I’ll tell you why: these people are nostalgic for Bohemia, whether they admit it or not. Secretly, if they consider themselves sophisticated, or openly, if they don’t, they’re perversely proud of the trad­ition of their neighborhood. The fact that the tradition was dead before most of these people were born seems to bother them not one bit.

Personally, they remind me of Hollywood folks; they’re just somewhat less vulgar. In L.A., people will say, “This was Charlie Chaplin’s house, you know,” or “Preston Sturges lived here.” What’s the difference between that sort of namedropping and the unspoken evocation of Eugene O’Neill, Edna St. Vincent Millay, e. e. cummings, Carson McCullers, and the East Village Other? Only the urban leaning toward the literary.

After all, many of use associate the Village with our youth. Those old enough to remember the Depression look back fondly at the speakeasies on 8th Street and the bowls of spaghetti they used to get for a nickel at Mori’s. Now, Mori’s is the ­Bleecker Street Cinema. Aging housewives can still recall how they arrived in New York in the late ’40s, suitcase in hand, and headed straight down to the Village, in the style of My Sister Eileen. Now, the drug-stores where young career girls used to sip their cherry lime rickeys at the soda fountain are 69¢ stores, Orange Juliuses, and chain shoe stores featuring Day-Glo cowboy boots. Once there were parties where guys wearing sweatshirts really did read poetry. Now young singles invite a date to dinner in their studio apartment. And why shouldn’t they? So once there were green fields and now there are sleazy junkie-filled all-night delis. So what?

Allow me to say that I am not impervious to the sort of sentimentality many New Yorkers harbor about the Village. Even I have a wistful memory or two of traipsing down to MacDougal Street with my friends, absurd nymphets dressed all in black wearing Fred Braun shoes and carrying Greek bags (those of us at the High School of Music and Art who thought of ourselves as nonconformists wore all black and Fred Braun shoes but carried leather bags) to meet guys with beards at the Cafe Figaro who were always just about to make it as folksingers, poets, or chess champions. But that was in the early ’60s, when the Fifth Avenue traffic still ran both ways, when Kennedy Airport was still Idlewild, and Charles Mingus was playing at the Village Vanguard.

But even that was ridiculous. I mean, let’s face it, the Greenwich Village Bohemia moved to Connecticut in the ’30s. If you want to see James Baldwin, take a trip to the south of France. We may all have bittersweet yearnings for the aesthetic of our youth, but living in a $700-a-month one-bedroom apartment in one of America’s best-known tourist attractions seems a bit like overkill.

Of course, there are those who’ll say that a nice $700-a-month apartment is a good find anywhere in the city, whether or not it is visited by the illustrious ghosts of the Beats. True enough. But then, let’s please curtail this “sociocultural heart of the city” business. After all, if you get down to specifics, the pickings are pretty slim. A theatre or two, a little music, the New School, a Japanese film festival now and then. What else is there: Balducci’s?

No, as far as I’m concerned, there are only two valid reasons to venture down­town. One of them is the second-hand bookstores, undeniably the best in the city. The other is the obligatory trek down to The Village Voice to hand in one’s copy under the duress of a deadline. When I heard last year that the Voice was moving, I had a moment’s delight. “Ah,” I thought, “they’ll finally move uptown to a grown-up location”; and the ’60s, my ’60s, would be over at last. Alas, I was sadly mistaken; they only moved the operation a few blocks east. “It’s not all that bad,” said my editor, trying to console me. “At least we’re closer to the subway now. And besides, we’re just a block away from the Strand. And we’re still within walking distance of Balducci’s.”

Balducci’s again. They’re always brin­ing up Balducci’s. Why, I remember when Balducci’s was just another Italian produce stand where fruits and vegetables were left to ripen in outdoor stalls in the summer. Well, it doesn’t matter. The years go by and it’s winter now, and much too cold to ever want to travel down to 14th Street again. And so what if I remember the days when there were no curfews in the city parks and boys and girls would stroll among the trees on warm nights and lie down on the grass together to neck for hours under the violet summer skies. ■ 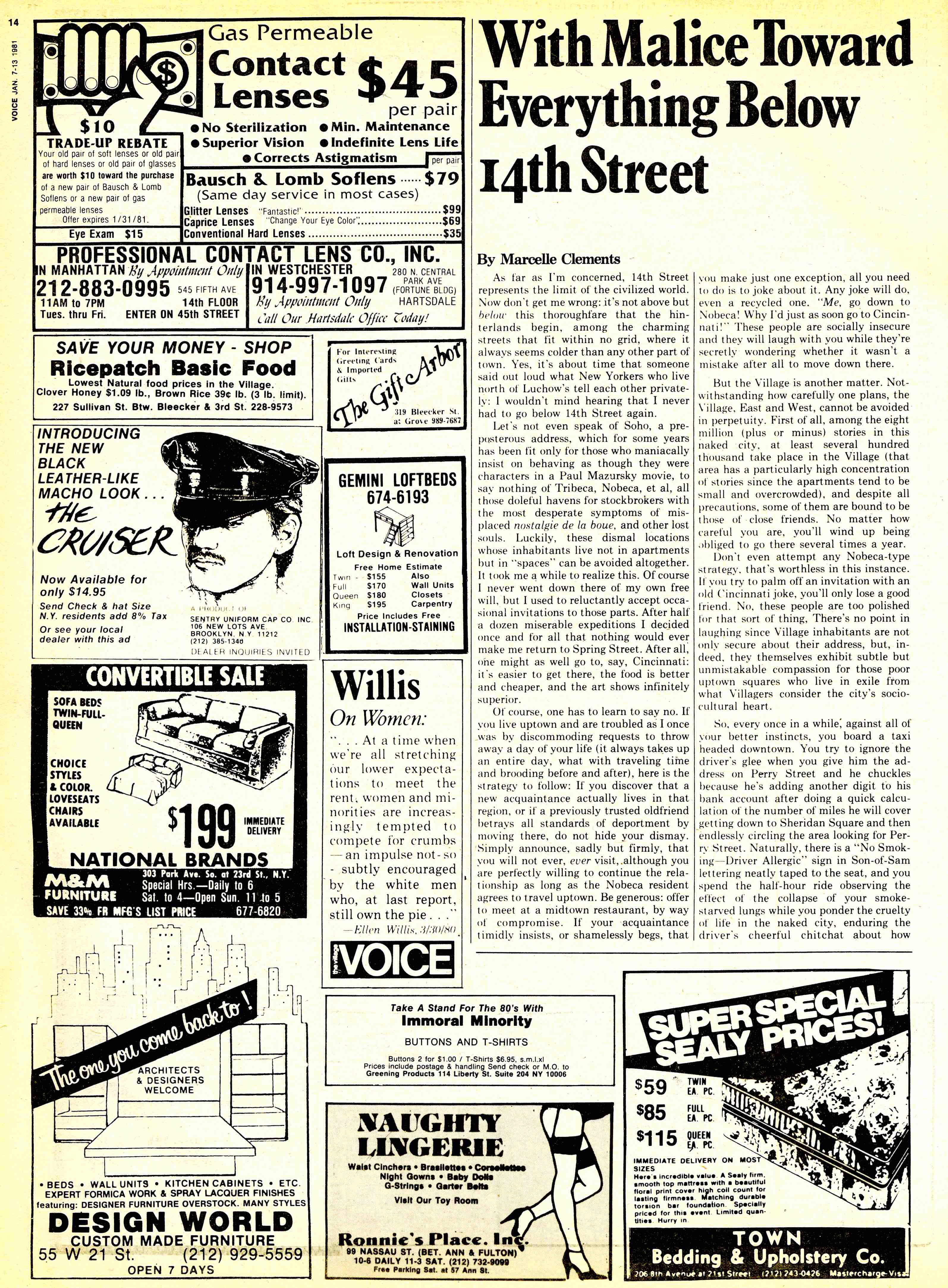 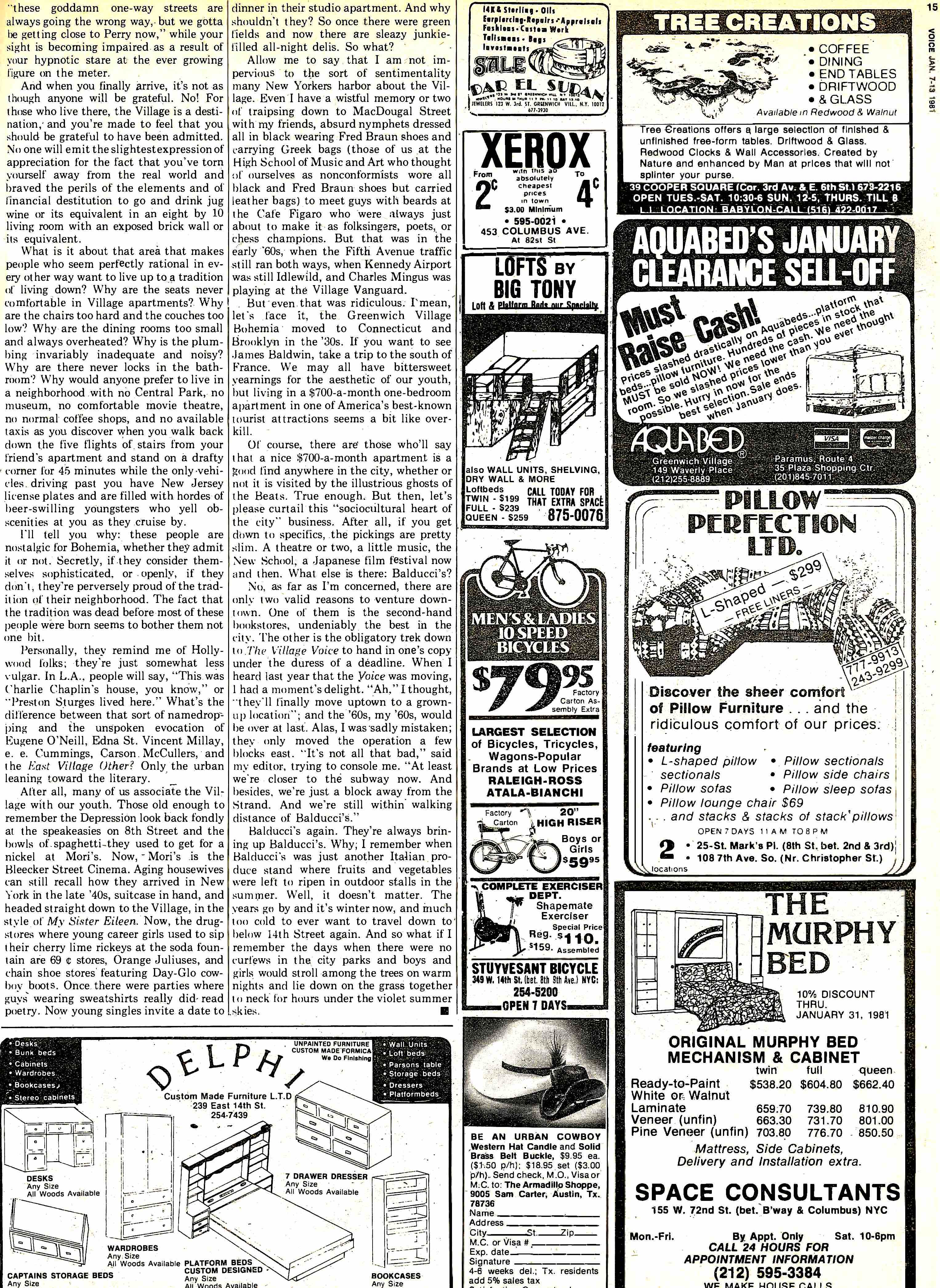