It was the only area appearance of rock bohemia’s legendary symbol, but on June 25 the spanking-new downtown Pep was crowded with refugees from 45th Street — ­rock and roll youth out to get laid, lighter on hitters than the Ritz, but nowhere near as effete as Danceteria or as schlumpy-­collegiate as Irving Plaza or CBGB. The one familiar face I spotted was that of Terry Ork, Richard Hell’s original im­presario. At two Hell came on with his latest band, who aren’t called the Voidoids even though they feature Ivan Julian and aren’t called the Outsets even though that’s their name, delivering a brief intro in his patented kindergartener-on-the-nod drawl: “Hello ladies and gents — we were children once.” Then they launched into “Love Comes in Spurts,” the song Hell chose to kick off his debut album almost five years ago. As the set rocked on I no­ticed a few ravaged old-timers observing from the sidelines. I also ran into Giorgio Gomelski, the Rolling Stones’ original im­presario, who dubbed Hell “a symbol of elegance,” spraying me with saliva as he did so.

As we collegiate schlumps often forget, it’s not impossible to symbolize bohemia and elegance simultaneously (cf. Walter Benjamin on the Flaneur). But though Hell apparently values his red top, which he wears on the cover of his follow-up album, it proved less noteworthy than the black leather and ripped T-shirts out of which he constructed the avant-punk anti­dandy back when Malcolm McLaren was strictly a haberdasher. Hell put on a strong show, but he made no waves in a casually dressed-up audience to which he related only as the professional entertainer he’s never much wanted to be. Once he defined, and I quote, a blank generation; now he disparages, and I quote again, the lowest common denominator. Over a five-year haul, symbolizing bohemia can get to be depressing work.

At the time of Blank Generation, Hell really was the quintessential avant-punk. With no more irony than was mete, he presented his nihilistic narcissism not as youthful hijinx but as a full-fledged philos­ophy/aesthetic, and though he never quite put his heart into proselytizing, he was perfectly willing to go along with im­presarios who considered his stance com­mercial dynamite — and to con others when the money ran out. Nor was he merely purveying a stance. Though it was the musicianship of Bob Quine — a much denser, choppier, and more nerve-wrack­ing player than his romantic rival, former Hell associate Tom Verlaine — that made the Voidoids the most original and accomplished band of the CBGB era, Quine was and is a sideman, worth hearing in any context but lacking the visionary oomph to create one. The band was Hell’s, and that it embraced former Foundation Ivan Julian, whose slashing leads I’ve misiden­tified more than once as Quine in a warm mood, and future Ramone Marc Bell, a converted heavy metal kid of surpassingly simple needs, says a great deal for his ambition and his outreach. That it sold bubkes, of course, may say just as much for his laziness and his hubris. But the prob­lem didn’t begin, or end, with Hell. The impresarios were just plain wrong.

So Blank Generation stands off in its own corner of the boho cosmos as the ultimate CBGB cult record. It had no ap­parent antecedents, and until Destiny Street was finally released by Marty Thau, the New York Dolls’ original impresario, its only descendant was Lester Bang’s Jook Savages on the Brazos. If the new album feels just a little tired despite its undeniable attractions, it’s not because Hell’s musical concepts have been lowest­-common-denominatored. With Material’s Fred Maher replacing Bell and postpunk engineer (Y Pants) and bandleader (China Shop) Naux on second guitar, it’s fuller and jazzier than Blank Generation with­out any loss of concision or toon appeal. Although producer Alan Betrock is a noto­rious pop addict, it was Nick Lowe who added ooh-ooh backups and cleanly articu­lated thematic solos to “The Kid with the Replacable Head,” back when Jake Riv­iera was doing time as Hell’s impresario; the version Betrock oversaw is chock full and coming apart, a real New York rocker. What’s changed is Hell’s head. He’s matured, as they say, and I’m not sure it suits him.

The problem begins with the two theme cuts — the title parable, a vamp-with-talk­over in which nostalgia and ambition are rejected in favor of the good old here-and-­now, and “Time,” in which an inescapable medium-tempo melody is attached to lines like “Only time can write a song that’s really really real.” Both are grabbers, and both soon let go, as music and poetry re­spectively. Elsewhere, the bohemian sym­bol’s destiny seems bitter indeed, as a glance back at Blank Generation makes clear. “Lowest Common Denominator” is the only all-out putdown, but where “Liars Beware” reviled power brokers, Hell is go­ing after scenemakers this time, no doubt the hitters and collegiate schlumps who’ve ruined his favorite hangout and orgiast’s dream. In “Down at the Rock and Roll Club,” “sexy love” was communitarian “fun,” but now he prefers to “get all de­-civilized” at a “dropout disco” that sounds more like some after-hours hideaway than the Peppermint Lounge. In fact, all the old escapes have lost their magic. “Ignore That Door,” a throwaway rave-up that’s the most sheerly fun thing on the record, op­poses scag as unambivalently (vaguely but unmistakably) as “New Pleasure” praised it, and twice Hell complains of feeling “alone.” So where “The Plan” and “Be­trayal Takes Two” equated private sex with Faustian sin, these days the poéte maudit manqué is looking for love that doesn’t come in spurts. In “Staring in Her Eyes” he explicitly surrenders his narcis­sistic nihilism (and his “looking around”) to achieve the bliss described in the title, which sure as shooting he takes to an un­healthy extreme: “Stare like a corpse in each’s eyes/Till you never want to come alive and rise.”

Admittedly, the song is affecting even at that, its lyricism intensified, as so often with Hell, by the yearning inexactitude with which he pursues its melody. And I sympathize in principle with Hell’s new head, as you probably do. I just don’t feel he has his heart in it. “Betrayal Takes Two” is a genuinely evil song, a seducer’s alibi worthy of Kierkegaard before Christ, while “Staring in Her Eyes” is sweetly creepy at best — a little easier to sell, perhaps, and a real truth for the chastened Hell, but with less to express and hence less to tell us. And no matter what Marty Thau thinks, it won’t be very easy to sell. Hell might conceivably follow in the foot­steps of David Johansen, the New York Dolls original, who now makes a decent living as a legend, but there’s a big dif­ference between the two — Hell’s aversion to the lowest common denominator. He’s just not a professional entertainer, and though his regrets over the multiplication and fractionalization of rock bohemia may be justified, his potential audience is no blank generation. Yet it was with that anthem that Hell tried to climax his show. It went over all right, of course — it’s a good song. But the audience remained rock and roll youth out to get laid, and the Pep didn’t look any more like a dropout disco when he was through. ■ 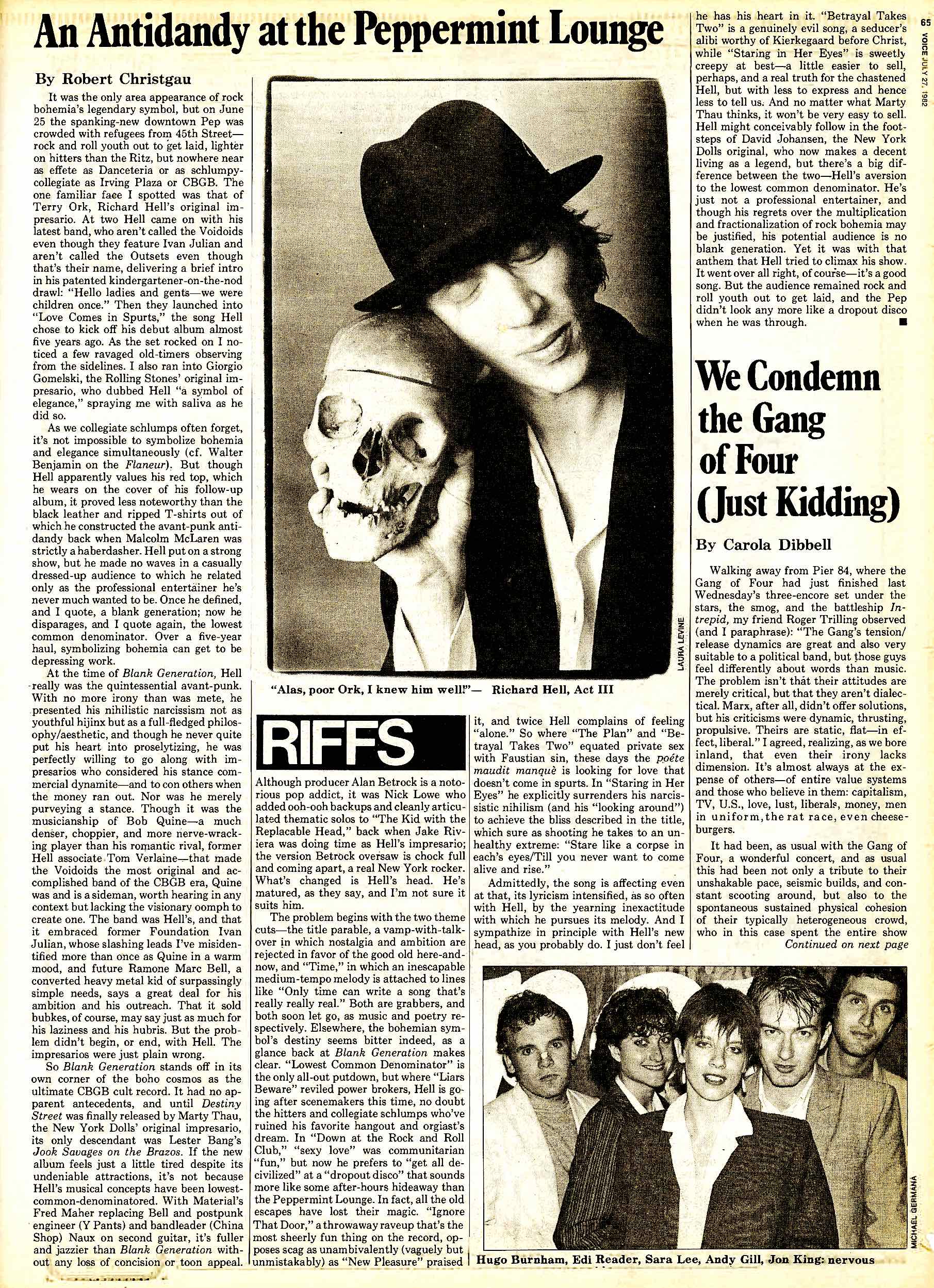