Norman Morrison burned himself to death to protest the Viet­nam war, and when reporters visited his spare room they saw quotes from Bob Dylan scrawled on the peeling walls. Students at the University of California have organized a non-credit seminar on Dylan’s poetry. Esquire Magazine quotes Stokely Carmich­ael singing to himself — not an Otis Redding blues — but Dylan. In a recent peace demonstration a teenybopper marched with a home-made placard that bore the crayoned motto, “The hypnotic splattered mist is slowly lifting,” a line from Dylan’s “The Chimes or Freedom.”

W. H. Auden, Howard Nemerov, and Norman Podhoretz say they have never heard of Dylan. Critic and poet John Ciardi says Dylan knows nothing about poetry. Even Norman Mailer, existentialist fight manager and white hope of the over-30 generation, says, “If Dylan is a poet, so is Cassius Clay.”

But 25-year-old Dylan, the Brecht of the juke box, has already won this generation of rebels, just as Kerouac and Camus have won earlier generations. Dylan’s words, values, imagery, even his eccentric life-style, are grooved into more under-30 brains than any other writer’s. And the miracle of it is that almost nobody over 30 in the literary and intellectual establishments even pays attention to his electronic guitar-coated nightmare visions of America as Times Square arcade at 2 a. m., where:

Now at midnight all the agents
And the superhuman crew
Come out and round up everyone
That knows more than they do
Then they bring them to the factory.
Where the heart attack machine
Is strapped across their shoulders
And then the kerosene
Is brought down from the cas­tles
By insurance men who go
Check to see that nobody is escaping
To Desolation Row.*

Two cultural traditions have grown up in America, one en­shrined in respectability and the other quarantined by its illegiti­macy. One is the university and the fashionable periodicals and it runs from T. S. Eliot to Edmund Wilson to Saul Bellow. But for a century now there has been an angry subterranean brook cutting away the bedrock beneath the arid soil of the New Yorker. This bastard tradition goes back to Whitman and Poe, and include Charlie Parker, Lenny Bruce, William Burroughs, and now Bob Dylan. It’s energy comes from slums, alleys and jails, instead of libraries, classrooms, and editorial office.

At the most obvious level of his impact, Dylan has “exploded” popular music the way critic Leslie Fiedler says William Burroughs has “exploded” the traditional form of the novel with is cut-outs and syntactical innovations. When Dylan landed on the scene in 1961 like some manic sparrow, pop music was rotting under the moon-June hegemony of Dick Clark, and folk music was still living off the legacy of Leadbelly and Guthrie. Then Dylan poured his symbolic alienation into songs like “Blowin’ in the Wind” and “A Hard Rain is Gonna Fall,” and broke the suffocating two minute and 50 second box of top 40 music. “Hard Rain,” recorded in 1962, was almost six minutes. “Desolation Row” is 11 minutes and “Sad Eyed Lady of the Lowlands” is 17 minutes. This exploding of both form and content opened up folk and pop music to new plateaus for poetic, content-conscious songwriters. Dylan, as seminal innovator, has made Lennon and McCartney, Phil Ochs, and the Byrds possible, just as Lenny Bruce made Woody Allen possible. In so mass a media as juke boxes and records, Dylan’s effect is already deeper and more durable than Sinatra’s, Rodgers and Hammerstein’s, and Presley’s. Dylan Thomas put song back into poetry, and Bob Dylan has put poetry into song.

Some artists develop vertical­ly, digging even deeper into the fi­ber of their own obsession. Hem­ingway, James Baldwin, and John Osborne fit this category. Other artists, more restless, ma­ture horizontally, changing passions and styles like seasons; Pi­casso, Norman Mailer, and Dylan among them.

The protean Dylan has written furious polilical protest like “Masters of War” (“when the death count gets higher/you hide in your mansion”). He has writ­ten a stunning group of anti-love songs like “It Ain’t Me Babe” (“go melt back into the night Babe/everything inside is made of stone/there’s nothing in here moving/and anyway I’m not alone”).

He has written mean put-down songs like “Positively Fomth Street” (“Yes I wish that for just one time/you could stand inside my shoes/you’d know what a drag it is/to see you”). And he has written lyric love songs like “Visions of Johanna” (“the ghost of electricity/howls in the bones of her face”).

On the wages of sexual repres­sion he writes “Doctor filth he keeps his world/inside of a lea­ther cup/but all his sexless pa­tients/they’re trying to blow it up,” and in the same song, “her sin is her lifelessness.”

On his recurring theme of an­ti-intellectualism Dylan writes in the “Tombstone Blues,” “The National Bank at a profit sells road maps for the soul/to the old folks home and the college.” And in “Ballad of a Thin Man,” he mocks journalistic non-partici­pants with:

You walk into the room
with your pencil in your hand
you see somebody naked and you say,
who is that man?
something is happening here
you don’t know what it is
do you, Mister Jones?*

On his passion for freedom from all arbitrary authority Dylan writes in his masterwork, “Gates of Eden”:

Relationships of ownership
they whisper in the wings
to those condemned to act accordingly
and wait for succeeding kings
and I try to harmonize with songs
the lonesome sparrow sings.*

And in his folk-rock hit “Maggie’s Well, Farm,” Dylan wrote:

Well, I try my best
to be just like I am
but everybody wants you
to be just like them.
they sing while you slave
and I just get bored
I ain’t gonna work on Maggie’s
Farm no more*

But beneath all these generational values lies Dylan’s transcendent vision that life is absurd and the only way to endure in this mad and routinized society is to see everything as a meaningless game juggling reality and illusion constantly.

In his current composition “Memphis Blues Again” Dylan reworks T. S. Eliot’s classic lines, “Between the idea/and the reality/between the motion/and the act/falls the shadow.” He writes:

Now the bricks lay on Grand Street
where the neon madmen climb
they all fall there so perfectly
it all seems so well-timed
and I sit here so patiently
waiting to find out what price you have to pay
to get out of going through all these things twice
Oh, mama can this really be the end
To be stuck inside of Mobile
With the Memphis Blues again.

Dylan, the clown juggler of fact and fantasy, the bastard child of Chaplin, Celine, and Hart Crane, reaches the zenith of his black absurdity in “Gates of Eden”:

the foreign sun it squints upon
a bed that is never mine
as friends and other strangers
from their fates try to resign
leaving men holy totally free
to do anything they wish to do but die
and there are no trials inside
the Gates of Eden.

Dylan is 25. His writing is very uneven and undisciplined. He is capable of such silly lines as “walk a rugged mile” and “I’m weary as hell.” Too often his compulsion to rhyme diminishes his imagery and music. He is hardly yet the equal of Lowell, Ginsberg, or John Ashbery.

But he has single-handedly revolutionized pop music and folk music. To a whole generation he has become the nations number one public writer.

And he is a poet. If Whitman were alive today, he too would be playing an electric guitar. 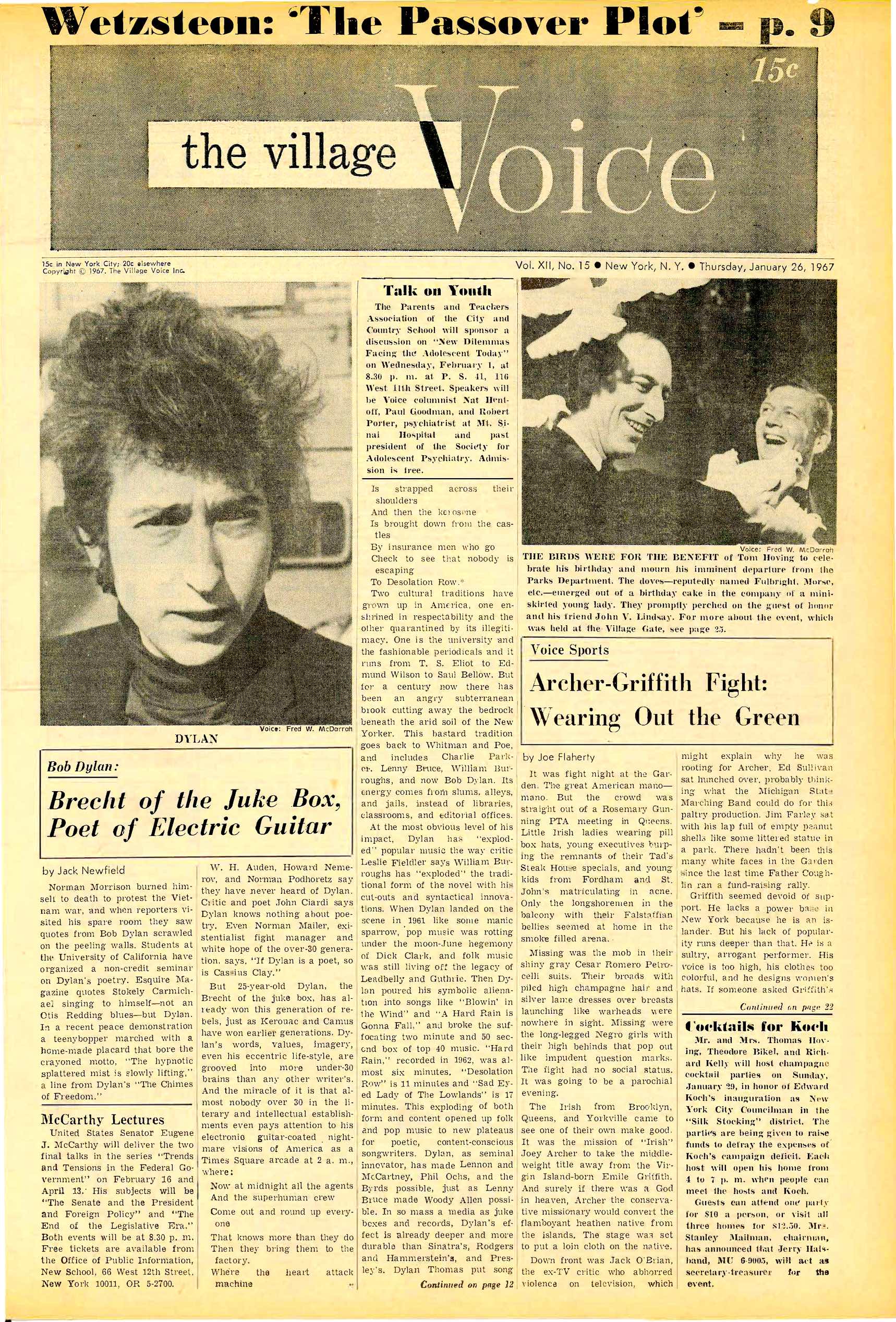 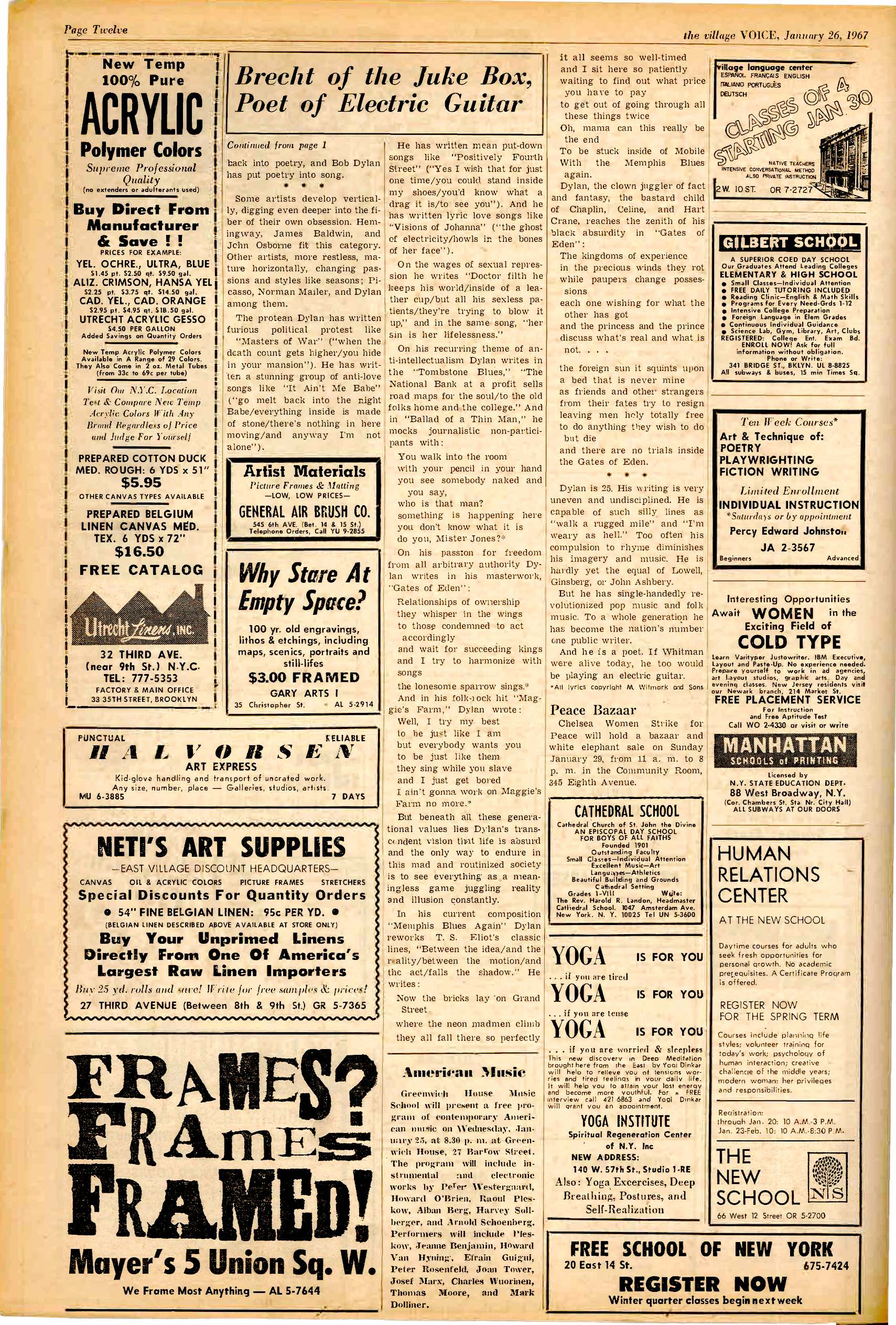