Alone with the tube in a hotel room in Antigua the night the NBA season starts. Most of the Black Entertainment & Sports Lawyers Association conference attendees are on a Jolly Roger pseudo-­pirate ship circling the island, savoring seafood, dancing with the CPAs from L.A., or networking with the handsome sports agent from Denver under a luminous starlit sky. Sprawled across my bed is a complete NBA roster ripped out of USA Today, Ira Berkow’s Times column on why Earl Monroe should be in the Hall of Fame (yes! imprison Earl the Pearl!) and a copy of Basketball Digest that cost $7.50 down here. On a Friday night in the most beautiful place I’ve ever been, I sit in my room watching a scratchy feed from a Chicago superstation as the undermanned Cleveland Cavaliers visit the new and improved Windy City Jordanaires. In between ads for the Illinois State Lottery’s free Michael Jordan calendar, a Jordan Wheaties spot with a cameo by Laker James Worthy, and closeups of Jordan’s num­ber 23 sprinkled liberally throughout the station bump­ers, Air Nike starts the season by scoring 54 points in a five-point overtime win. He’s merely effective the first three quarters but, as he later told AP, the “last 10 minutes were the type of game you’d like to play for 48 minutes.” Candy-sweet bank shots, 15-foot J’s in Ron Harper’s face, and a couple of right-hand, string-bend­ing, tongue-dangling dunks tie the game in the fourth quarter and win it in overtime. God must be watching too: right after the game there’s an intense 20-minute tropical shower.

Next morning clouds obscured the sun and brief squalls of rain sent sunbathers scurrying in and out of tanktops. Inside a hotel conference room the seminar on marketing sports and entertainment figures to advertis­ers was dominated by Bill Strickland, a husky, light-brown man wearing glasses, salt-and-pepper beard, and a short Afro. Strickland, the most prominent African­-American rep at Pro-Serve, which handles 160 athletes, among them Jordan, Worthy, Patrick Ewing, Arthur Ashe, and Jimmy Connors, related the saga of Jordan’s journey from ballplayer to corporate icon. “Michael Jor­dan makes five times his on-court fee in endorsements,” he said. The collected lawyers, accountants, and execu­tives gasped. The brother gets $3 million a year from the Bulls.

Yet when he was drafted by the Bulls in 1984, after beating Georgetown with a last-second shot in the 1982 NCAA title game as a freshman, being named Sporting News college player of 1983 and ’84, leading the Olympic team to gold in 1984, only two companies approached him for endorsements: Nike and Converse (which, for the record, is the sneaker he wore in college). Nike wasn’t looking to make Jordan a trademark. The initial offer was your typical jock-athletic shoe hookup — some cash, some posters, and an unlimited supply of footwear.

But Pro-Serve pushed hard on what it believed was a unique product. Playing the game spectacularly yet somehow unselfishly and the media with calm Southern charm, Jordan was positioned as basketball’s Arthur Ashe, bridging a deep class schism. And within a year the agency had gotten Nike to move on its idea of a “signature shoe” called Air Jordan. This revolutionized the signature endorsement game, bringing Nike approxi­mately $130 million Air Jordan’s first year, opening the door for the Ewing collection (“In the ad, when Patrick turns to face the camera, he smiled to soften his ‘Hoya Paranoia’ image,” reports Strickland) and the Mugsy Mobile, a special-edition Ford Fiesta sold only in the D.C.-Baltimore home turf of 5-3 NBA guard Tyrone “Mugsy” Bogues.

Jordan became a Coca-Cola spokesman, according to Neva Richardson of Chicago’s Burrel Advertising, the nation’s largest black-owned agency, because the company needed help. In the wake of the “new Coke” fiasco, the soda makers hooked onto Max Headroom as their new commercial symbol. Problem was, black folks — who compose a huge part of Coke’s market — hated the com­puter-generated talking head. Here came Mr. Jordan. “Michael Jordan legitimized Max with a black audience” by interacting with him in a spot, according to Richardson.

But Jordan’s ultimate challenge was getting hooked with Mickey Dee’s. “It took Pro-Serve a year to turn McDonald’s around,” Strickland says. Three times Ronald McDonald said “No” to Jordan. The major impedi­ments were (a) Jordan played a team sport in which individual identification isn’t as high as in boxing, ten­nis, or golf, and (b) Jordan was black. (“Absurd,” a McDonald’s spokesperson countered.) But Pro-Serve kept up the pressure, and as Jordan became an icon, McDonald’s bought in. Meanwhile, black Super Bowl most valuable players Doug Williams and Jerry Rice both complained of getting few if any national endorse­ment offers, whereas Boomer Esiason has fronted sever­al national campaigns since the Bengals lost last Janu­ary. In a Wall Street Journal piece on the audience­-recognition ratings of top athletes, seven of the top 10 were African Americans, but only one of the seven, Jordan, is really clocking dollars. Despite the number of black faces sprinkled in current ads and the success of black athletes overall, the male African-American sports star is still viewed as a potential negative. McDonald’s was leery of touching Ewing because he had a child out of wedlock. (When informed of this account, the same McDonald’s spokesperson said, “I’ve never heard of it.”) Yannick Noah, a charismatic tennis star with endorse­ments throughout Europe, Africa, and Japan, was passed over by American ad agencies because “his dreads didn’t sell in Manhattan,” said Strickland.

After the seminar, down by the beach, I talked with Barry Mayo, the general manager and part-owner of Chicago’s WVAZ, who in the radio world is as much a star as Jordan is in his. Listening to him analyze for­mats is like watching Air Jordan probe a defense. For some reason our talk reminded me of last summer, when Jordan appeared on the cover of Sports Illustrated play­ing golf. Then it hit me. With his well-honed talents, shrewd advisers, and carefully cultivated smile Jordan bad, in C. L. R. James’s famous sports phrase, gone beyond the boundary. On-court he is, in his time, the equal of the Big O, Russell, Wilt, the Pearl, and Dr. J, all prime exponents of the improvisational impulse I like to call the Black Athletic Aesthetic. Off-court, though, he represents more than that to the collected black professionals of BESLA.

Jordan’s blend of middle-class dignity with Julius Erving’s high-intensity elegance, both funneled through a hi-tech marketing campaign, makes him the locker-­room peer of Mayo and Strickland. More than any other contemporary African-American athlete, his ability to thrive in the pressure cooker of corporate America (his off-season consists primarily of appearances at various company conferences, charitable events, and shooting commercial spots), while never making any embarrass­ing “I’m not black, I’m universal” comments or selling his soul rather than just his visage, makes him a role model. Professional black women, who tend to find athletes sexy but shallow, are attracted by his serious­ness (that Jordan married the mother of his son only made him larger in their eyes). His success embodies the equation all of us at Antigua are seeking: success, with maybe a bit of compromise, but without sellout. Spend­ing the night watching Jordan work wasn’t simply bas­ketball junkiedom, but paying respects to a peer. Mi­chael Jordan —commodity, pop star, all-African­-American guy — is the first true buppie b-ball star. And he did it all without a nose job. ■ 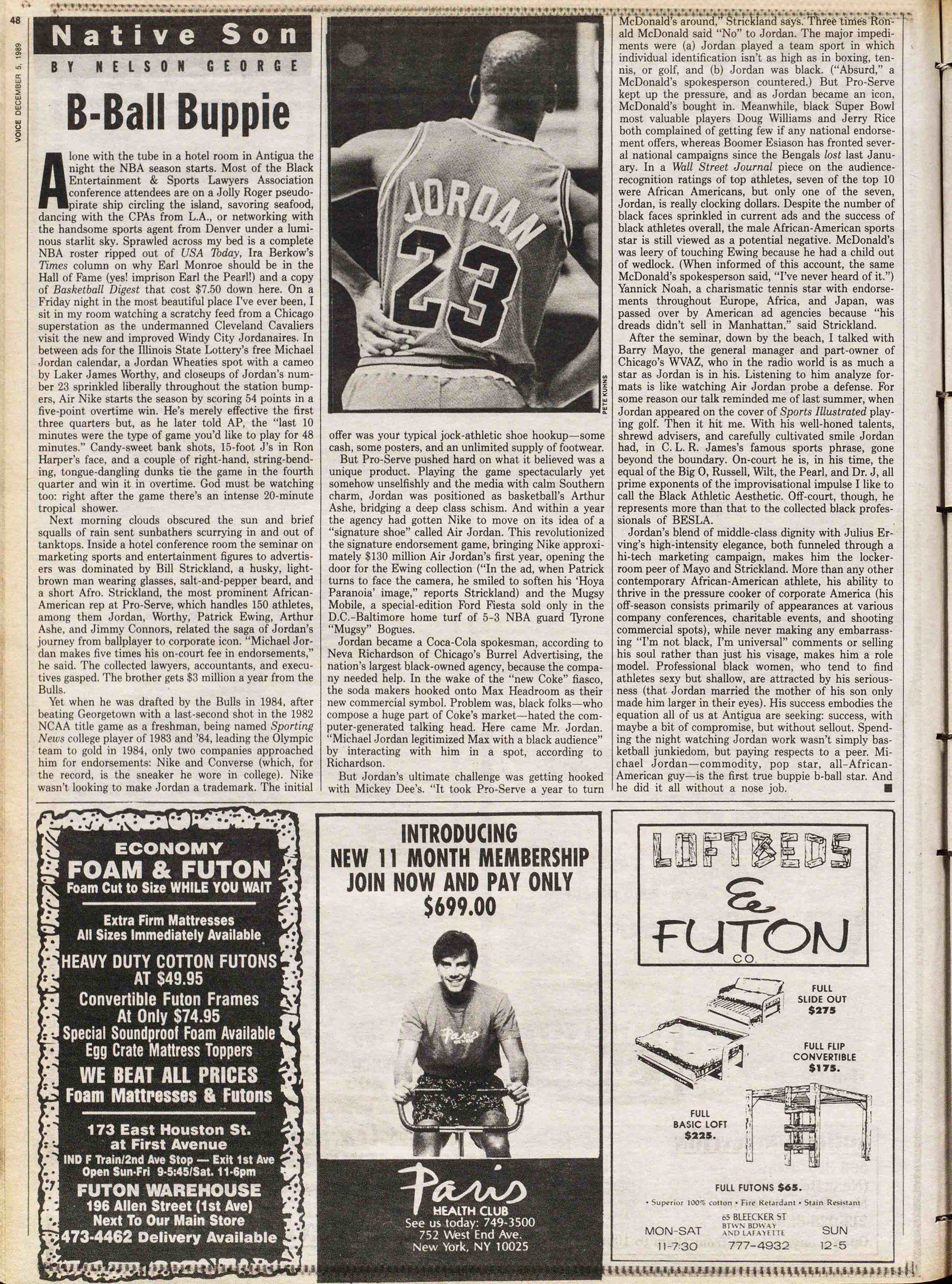