A week ago last Monday, Mike Umbers sat on the deck of his Gay Dogs on Christopher Street, a can of Pabst Blue Ribbon in one hand, a Lark in the other, and talked about prostitution and pornography and real estate —  and himself. He said he was worried that the feds would soon be cracking down on him. Late Thursday, Christopher’s End, his heavily patronized all-male after-­hours bar, was raided and cleared out for the night for ABC liquor violations. Sunday morning, 4 a.m., the place was raided again, this time by the feds as well as city cops. Two of Mike’s employees were arrested and charged with failure to have the $56 federal tax stamps required for retail liquor dealers. Mike, who was not on the premises, escaped arrest.

Mike’s three big Christopher Street operations are Chris­topher’s End, when it’s open, the Studio Book Store, and Gay Dogs. All right-out exploitative. Mike calls himself a gay catalyst and flesh peddler. He deals in boy-boy sex. He describes Mark Litho, his publishing house, as a means to produce paper flesh that his Stu­dio Book Store peddles. Gay Dogs is cruising flesh. And Christopher’s End, with its backroom and nude boy shows, is climax flesh. Mike is also rumored to have his finger in the controver­sial Stonewall Inn. It was boarded up June 27, 1969, and won’t be re­opened until a liquor license is issued. Negotiations have been going on for several months. Right now, the second floor of the two-story Stonewall is occupied by a bevy of young men. The Stonewall proper is in construction limbo.

Mike Umbers may be the “soft­-spoken maverick looking for sexual and financial freedom” described by Women’s Wear Daily, but he’s hardly the Umbers they depict who left his security analyst job at Hayden Stone eight years ago because “I disliked the coat and tie, the pretentiousness of the scene, and hated being packed into subways.” Eight years ago, Mike wasn’t riding subways. He was serving time on a first degree attempted grand larceny charge. Five years, from 1961 to 1965, shuttling between Clinton and Greenhaven and Auburn and Sing Sing. He says he went up on an insurance fraud and it was his first arrest, in fact the first time anyone from his Long Island family ever went to jail. In all four prisons, he worked for psychiatrists, pulling $5 a day. Prison was a tuition-free educa­tion for Mike, “the best education you can get.” When he came out, he had a grand total of $86 in his pocket and owed $40,000.

Contrary to Women’s Wear Daily (“after Wall Street, he began his own construction busi­ness”) Mike went into the boy-girl whoring racket. He says he was “the best male madam in New York with three houses on the East Side, all very luxurious.” One wonders how an ex-con up to his neck in debt, with no credit rating, can make it big and quick in the world of high-class uptown prostitution. The way Mike tells it, he was commissioned to paint a portrait of this good looking broad. The deal was for $300. The money came in dribbles. The broad would intermittently ex­cuse herself from the sitting, disappear for 20 minutes or so, come back, and pay Mike a little more.

The way fate has it, the broad was a whore, a high-class one, the highest in town. She and Mike took to shacking up together. He became her man. She gave Mike a daily allowance of $100. For some reason or other, they went off to Canada. He got busted on a white slavery charge. They came back to the States. But there was a long period when Mike was left alone with Susie’s fancy apart­ment and a ringing phone. So Mike took it upon himself to meet Susie’s girl friends and a few new girls to help satisfy Susie’s clien­tele. Soon Susie returned to reclaim her turf. Mike slipped into the male hustler scene. It’s a heavy scene. Mike got tired of fucking different women three or four times a day and got tired of playing the head games, telling this one I love you truly and as soon as she’s departed, telling that one I’ll marry you. Mike’s energy petered just in time. Three weeks after he got out of the business, the local cops busted down doors of apartments he’d moved out of. The FBI produced a two-inch dossier on him. He says, “I saw it when they tried to make me do something I didn’t want to do.” For the record, the blotter shows 10 Umbers arrests in addi­tion to the larceny term. The ar­rests include procuring and obs­cenity and criminal receiving and petty larceny.

Mike in the summer of ’71 is not the slim Lothario he was a few summers back. He’s a little paunchy, a little tired, an air of defeat underneath the bravado. All things considered, though, he looks good at age 36. He’s got great pearly white teeth, short salt and pepper hair, kind green eyes, and a native intelligence that would work for him in any business, including security ana­lyst. Plus, he listens. The kids who fetch his cigarettes and sweep his Gay Dogs floors and fix his peep show machines react to Mike like kids trying to please a father. Mike in turn gives them a verbal pat on the head. But his eyes are miles away.

Mike Umbers is not the only one who is having his share of troubles. The July 18 raid on Christopher’s End was one of nine that took place on after-hours bars that night.

The Daily News labels the raids “a move to cut off one of or­ganized crime’s sources of in­come, estimated at $2 million an­nually from nine after-hours clubs alone.” It’s unlikely that income will be cut off for long. The cop at Christopher’s End figures the place could re-open in a few days. And the fed at Christopher’s End figures this is just small pickings in the over-all big syndicate scheme.

“What’s the next step,” I ask Mike Umbers. “Are we heading toward legalized prostitution?” Mike says he’s been approached by a buddy, a super cop on the In­telligence Division, a cop with only a few more years before ret­irement. The cop propositioned Mike about setting up a house. “He claims it’s the next thing Lindsay will do. He’ll legalize prostitution in special districts, maybe within the next year or two, allowing houses to exist. It’ll be a terrific source of revenue, and the Intelligence guy is smart enough to want to get into it at the start.” I ask Mike if he’s into prostitution now. Yeah, sort of, soft sell, through the Studio Book Store. He calls it a male escort service. It works like this. A dude hits town and heads toward the bookstore. He buys $40 worth of porno. So the next question to the clerk is “where can I score?” Out comes the models portfolio. Shots of 10 boy beauties, available at $25 to $50 an hour. The connec­tion is made. The customer pays. And Mike splits 50-50 with the model. All nice and clean, no hassle, everybody’s satisfied. What the model does on the job is his business. Mike doesn’t want to know from it.

Mike, however, knows his sex business well. Well enough to give an impromptu lecture on the as­cending ladder of whoring. At the very bottom is the streetwalker. It’s the lowest form. The boys peddle their wares on Third Ave­nue in the 50s and West 42nd; the girls play the 40s and West 70s. They trick out of hotels, they do a lot of stealing and beating up of johns for money. They work the hardest and still earn nickels and dimes. “There’s little whoring in the West Village,” says Mike. “It’s the land of boy hustlers and the land of the freebies.” Next step up is the massage parlor. A girl works in the back room of a storefront that’s been converted. Mr. Customer walks in, gets a massage, and if he sounds right, gets more than a massage. The masseuse averages $100 a day. Step three is the man or woman who toils under a madam(e) in a house. The average pay is $150 a day and life is easy. Top of the heap is the call boy or call girl who has his own apartment and his own clientele. If his stamina and business sense are good, he can pull $300 a day.

Mike’s West Village real estate holdings include 714 Greenwich Street, a five-story residential building between West 10th and Charles, and 178 Christopher Hotel, which houses the Krone Gallery and is adjacent to the Christopher Hotel, home of Christopher’s End. He claims he owned these buildings before he went to prison. He also owns two East Village buildings (one is the former STAR house — see last week’s Voice) and East Side. The Christopher Hotel was one of the last addresses of Jerome John­son, Joe Colombo’s attempted killer. Did Mike Umbers know Johnson? “I’d seen him around,” he says. “He was a junkie. He used to hang out at the Keller Hotel. Like most junkies, he’d do anything to hustle a score.” Had Umbers been questioned about the Colombo shooting? “The cops were here three or four hours after it hap­pened. They got what I know.” (On Monday afternoon, after the weekend raids, Chief of Detec­tives Albert Seedman, who has been investigating the shooting of Joe Colombo, announced that Umbers was the link between Di Bella of the Mafia and Johnson.)

I ask him what’s to become of the STAR house. “I plan on making it into a gay hostel” he says. ”It’ll have three floors of dormitory, and I’ll charge $1.50 a night. Anyone can stay there. I’m not interested in making money. I have gay businesses and I employ gay people. I started this whole empire myself, and I’m doing more for the gay community than any organization.”

I wonder what Mike means by “any organization.” Is he talking about gay liberation? 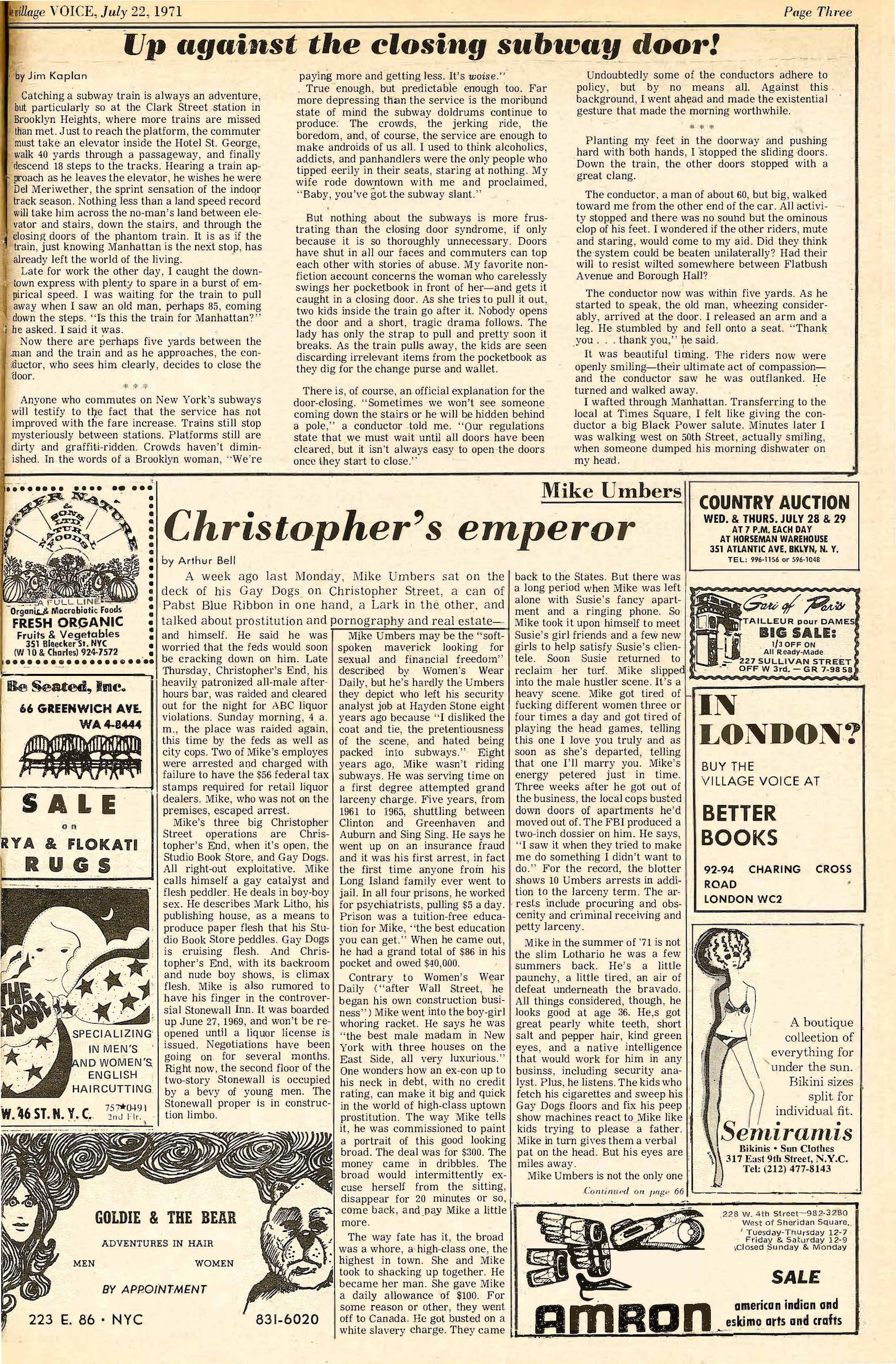 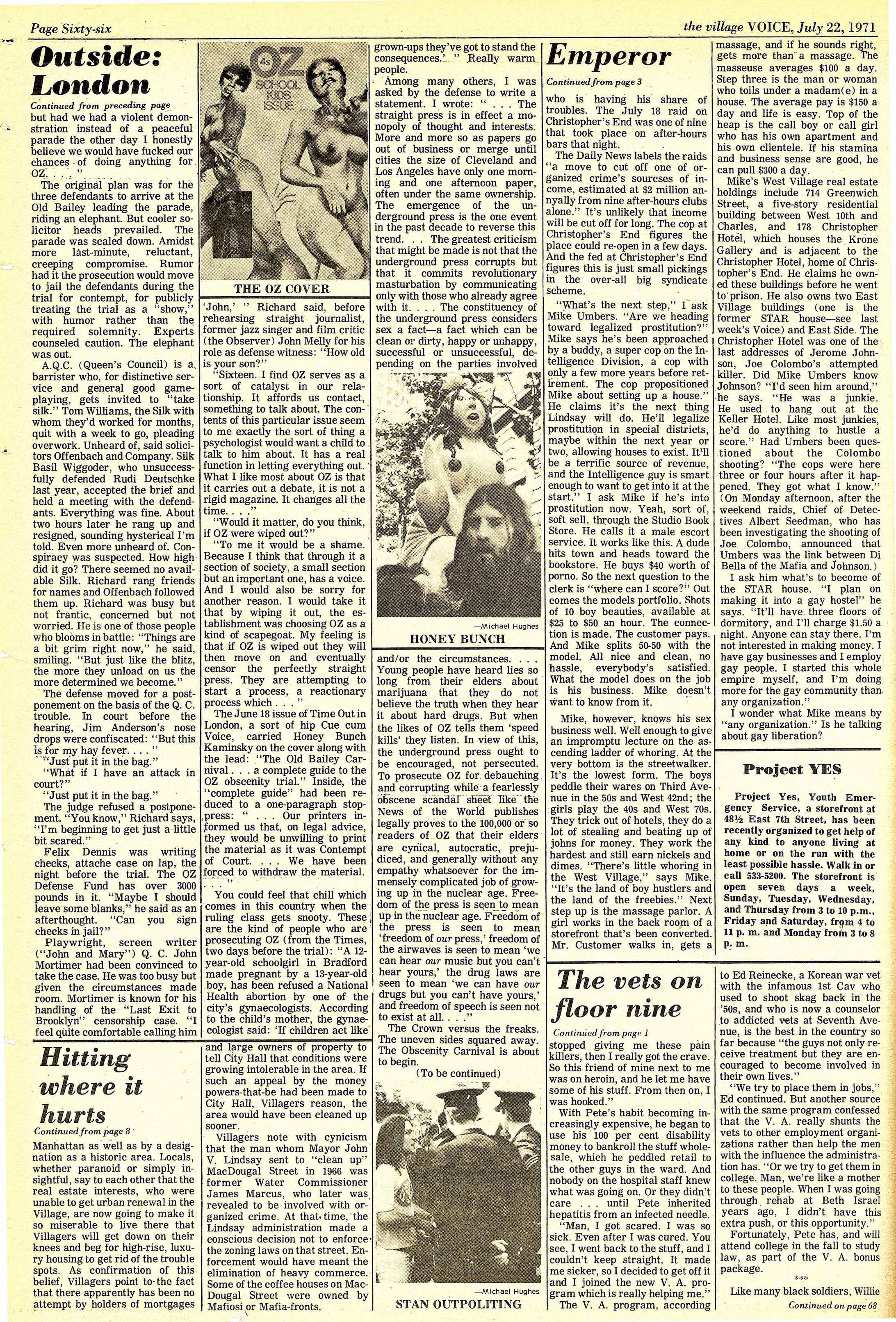