I share in the homosex­ual rage sweeping New York — a rage too long dor­mant — against the cen­turies-old abuse of homosexuals. That anger is now directed at stopping the filming of Gerald Walker’s novel Cruising by William Friedkin.

Two main arguments have emerged for stopping the film. The first is that it may unleash a wave of violence against homosexuals. The second is that its con­centration on the elements of cruising, leather bars, and sadomasochism may result in a distortion of all homosexuals by focusing on a small segment.

My thoughts on violence and censorship — the issues involved here — are shaped by intimate encounters with each. As a homosexual, I have seen “queer­bashers” with chains ready to lash in cruising turfs; have seen faces of homosex­uals branded with lead pipes by hate-pocked “straight” attackers; have heard the curdling epithet “Queers!” and the accompanying crash of glass; have ex­perienced the frustration of failing to get cops to move into assaulted areas they invade only to arrest homosexuals.

As a writer, I have experienced censorship too. Last year in England an anti-homosexual group effectively banned a nonfiction book by me by threatening the publishers with a suit before publica­tion, thus intimidating booksellers into not carrying it. That book, the group claimed, would pervert by presenting homosexuality in a “positive” light.

I do not question the homosexual anger in New York. It is the particular nuances of this matter, and possible hidden ramifications, that I believe should be explored further. Now, it would be naive to deny the special impact of films. It is also risky to predict that impact; and it may prove dangerous, based on such prediction, to move into the quagmire of prior censorship. Censorship continues to be a major factor in the oppression of homosexuals. For years, the motion picture code forbade any treatment of homosexuality. Showings of Genet’s Un chant d’amour and Kenneth Anger’s Fireworks — groundbreaking homosexual films — resulted in raided theatres. Until recently, photo­graphic and verbal presentations of homosexuality were ipso facto causes for censorship. Confiscation of homosexual magazines and books was routine, and jail sentences resulted. Gore Vidal’s The City and the Pillar was denied advertising space. Only last year, The New Yorker rejected advertising space to a staid homosexual publication.

Where shall the line now be drawn, and by whom? Is Roots offensive for showing violence against blacks? Holocaust against Jews? Shall television news clips exposing war atrocities — factors in ending the Vietnam war — be censored? And news stories of murders and kidnappings? What about Looking for Mr. Goodbar and Hard Core, both of which contain gross scenes of heterosexual brutality rendered even more offensive by posturings of morality and gratuitous anti-homosexual implications? And Kubrick’s A Clockwork Orange?

Granted that Friedkin’s intentions may not be noble; remarks attributed to him from years back sound at best archaic today. (One should point out, however, that his film of Mort Crawley’s play, The Boys in the Band, was very daring and sympathetic for its time.) Undeniably, the producer of Cruising, Jerry Weintraub, has been vulgarly offensive, insensitive to real issues. But can one determine from a script a film’s full meaning, which is also shaped by essential elements of per­formance, editing, even music? It is not only Cruising that is involved here: The precedent set by preventing its production will reach out to all other films — and may ricochet.

What are the long-term effects? Will any group demand to see a script in advance? May the same argument be used against a film made by homosexuals and opposed by heterosexuals? Shall we determine artistic expression by popular consent? May we not inadvertently be assuring that no director, no producer­ — not even homosexual ones — will dare to deal with homosexuality on screen at all? Anita Bryant attempted to silence our voices before it could be known what we would say. Our mere presence in schools, she asserted, would pervert children, even bring violence on them. She interpreted the impact of our behavior and, prejudg­ing it, moved to ban it.

Thomas Paine saw the trap of selected censorship: “He that would make his own liberty secure must guard even his enemy from oppression if he violates this duty, he establishes a precedent that will reach to himself.”

If this film turns out to be odious, might we not turn it to our advantage, clarifying the elements it has, even if distortedly, exposed? Might we not point out that the violence against us is a result of sexual repression and other outside pressures inflicted on us — that the seamy places shown are those we have been shoved into by those societal strictures? Might we not use it to expose the indif­ference to violence against homosexuals, and the fact that one of the major outrages we face is the latent homosexuality of cops who stalk us and even turn into “queer­bashers”?

Might we not, further, encourage pow­erful but uncommitted homosexual direc­tors and producers to counter the Friedkin film’s purported distortions by dealing with our own realities instead of hiding, as those directors and producers often do, in musical inanities and films brimful of social conscience toward everyone except homosexuals? At present, the troubling subject of violence toward homosexuals dealt with in Cruising, however sensation­alized its treatment may turn out to be, is virtually unknown to other than the victims of that violence.

It is exposure, not secrecy, that precedes the solution of a problem. When, a few years back, a cruising park in Los Angeles was ravaged by a wave of “bashings,” it was media silence and police apathy — not exposure — that allowed the attacks to continue unabated night after bloody night until murder inevitably occurred.

The second reason proffered against the filming of Cruising — that it presents a negative view of the homosexual world — also needs close examination. I firmly believe that not even implicit criticism of the homosexual world may be made that does not contain a greater criticism of heterosexual totalitarianism. But once that is emphasized, it is dishonest to deny that many homosexuals prefer certain subjects of homosexual life to remain hidden — especially that of sadomasochism.

Understandably, in view of the rabid homophobia, some of us want to conceal all that can possibly be determined as “ugly,” even when that ugliness is implanted by heterosexual bigotry. The re­sult is that we often become the only minority intent on showing our oppressors how happy they have made us. We affect that by insisting doggedly on presenting a so-called “positive” image — often a eu­phemism for heterosexual imitation — even to the point of denying the enriching spectrum of our experience, including an abundant sexuality, which needs no apology.

Beyond the immediate context of what Cruising may or may not show, some questions should be asked. Would we allow any other film to deal with some of the elements we are objecting to in Friedkin’s? Or should we banish them totally from exploration? Only from heter­osexuals or even from our own? Will there be a leap to demand to see advance galley proofs of magazine articles and books?

We homosexuals cannot improve our world for ourselves and for those who follow us — and improving it is a duty we should all feel — if we ban the exploration of our problems. They will not go away if we shove them into the closets from which we have ourselves emerged. The homosexual energy now crackling in New York and elsewhere against oppression has too long been unreleased. Now that we homosexuals have rediscovered the spirit of the Stonewall Inn protest, the power must be used strongly. But critically. For the fight still clearly looms. 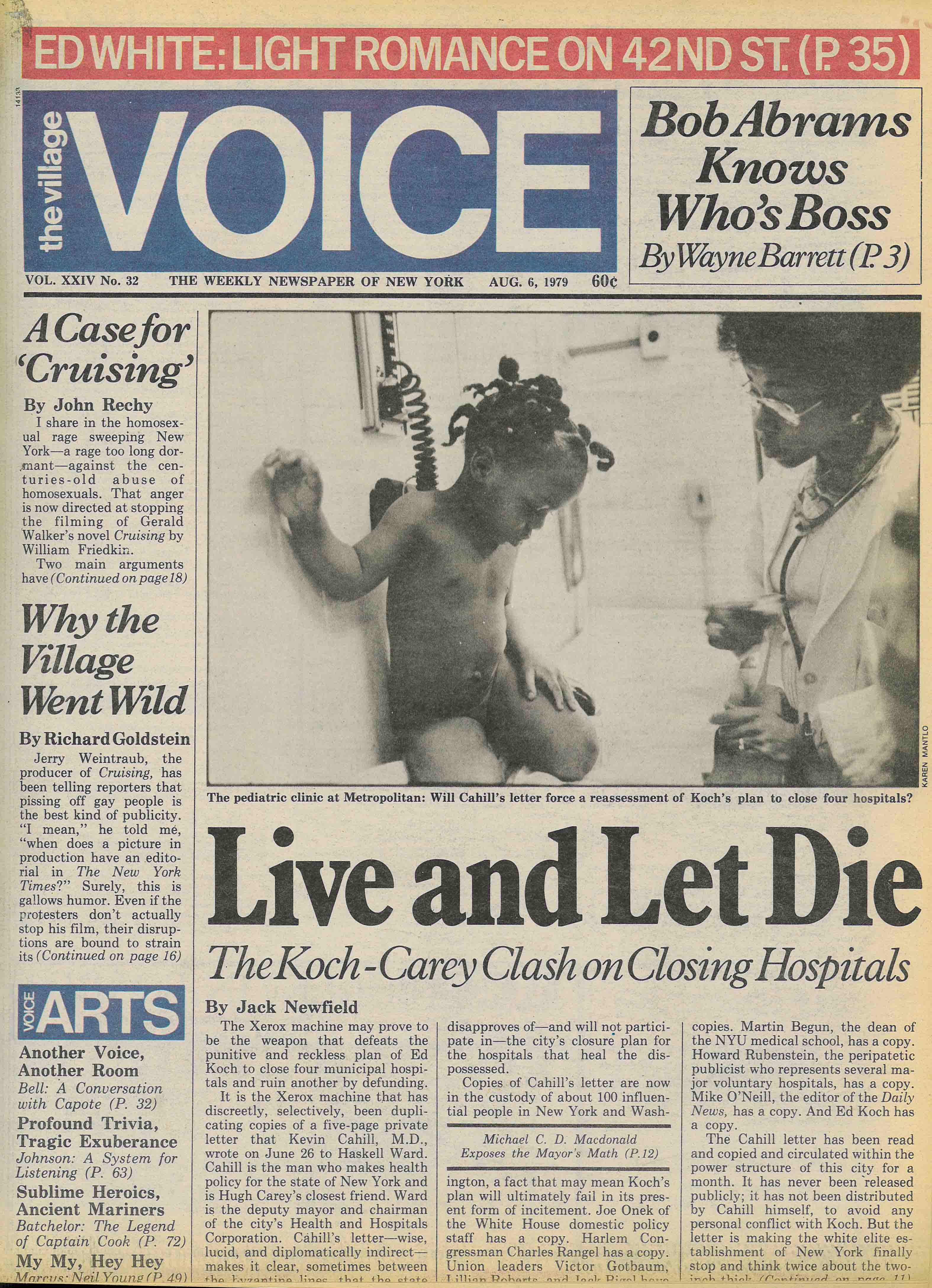