On May Day, the remnants of my old radical feminist group Redstockings held a memorial for Simone de Beauvoir. I had wanted to go, but couldn’t make it, so I heard about it from a friend: Ti-Grace Atkinson talked about going to de Beauvoir’s funeral, women spoke about her impact on their lives, someone read a message from Shulamith Fire­stone. Listening to this account, it occurred to me that in a way my relationship to de Beauvoir had always been secondhand, mediated and refracted by other feminists. When I first got involved in the women’s liberation movement, I knew de Beauvoir only through The Mandarins, which I’d read, naively, as a novel (a good way to read it, I still main­tain). After joining the movement I dutifully began The Second Sex, but aban­doned it halfway through; it was too detached and distanced, too much the product of a French cultural and philo­sophical framework, to compete with the overpowering immediacy of all the dis­cussion about our lives that permeated those early days of activism. (The woman who recommended it to me had discovered it at a time when America’s idea of a feminist was a little old lady brandishing an umbrella.) Not till years later, when I was able to give the book the attention it deserved, did I fully appreciate de Beau­voir’s impact on the politics of the femi­nists I was closest to — as well as those I most bitterly disagreed with.

Nearly four decades after it was first published in France, despite all the com­mentary the feminist movement has pro­duced in the meantime, dated and paro­chial as it is in many respects, The Second Sex remains the most cogent and thorough book of feminist theory yet written. With its exhaustive portrayal of the ways in which male domination and female subordination penetrate every as­pect of everyday life and shape our cul­tural myths and fantasies, it offers de­tailed evidence for the basic claims of second wave feminism — that male su­premacy is a coherent system of power relations, and that “the personal is political.”

If de Beauvoir’s existentialist perspective is too innocent (and perhaps too ar­rogant) for a postmodern, poststructuralist era, it’s metaphorically appropriate to her subject. Since the denial of personal autonomy defines women’s oppression — ­and since patriarchal ideology holds that allowing women autonomy would destroy civilization if not the human species it­self — a moral defense of freedom is nec­essarily at the heart of feminism. And for the feminists of my generation, so many of whom were “liberated” — that is, had consciously set out to earn a living, sleep with whom they pleased, and avoid tradi­tional wife-and-motherhood — the collision between our sense of entitlement to freedom and men’s stubborn assumption of dominance was not only a political (and personal) struggle but a grand moral drama. De Beauvoir’s rendering of wom­an as the subject seeking transcendence, only to be forced into the position of other and trapped in immanence, ex­pressed that drama with a clarity that almost made up for her coolness.

De Beauvoir’s influence pervades the early radical feminist critiques of Marx­ism. It was de Beauvoir who first pointed out the reductionism of Engels’s attempt to trace women’s oppression to the for­mation of classes, who insisted that sexu­ality and reproduction had to be primary categories for understanding women’s lives; it was also de Beauvoir who ar­gued — even more problematically from a conventional leftist point of view — that social conditions did not cause oppres­sion; rather, people responded to those conditions by choosing to oppress. “His­torical materialism,” she wrote, “takes for granted facts that call for explana­tion: Engels assumes without discussion the bond of interest which ties man to property; but where does this interest, the source of social institutions, have its own source?”

Engels and other historical materialists did have an implicit answer to this question: interest had its source in the desire for survival and material comfort. But by de Beauvoir’s time it was clear that this common sense approach to the question could not explain the rise of fascism, the failure of revolutionary socialism in west­ern Europe, or the totalitarian perversion of the Russian Revolution. De Beauvoir built her philosophy on the idea that the human subject has an intrinsic impulse toward freedom, but this was if anything less useful than materialism for under­standing the dynamics of domination and submission. Her solution to the problem was blaming oppression on “the imperial­ism of human consciousness,” which, she argued, “included the original category of the Other and an original aspiration to dominate the Other.” Of all her dubious appeals to a priori truths about human nature, this one seems to me the weakest. And I think it’s no coincidence that sub­sequent feminist thinking about the roots of male supremacy has been muddled at best.

Many radical feminists who considered themselves materialists in the Marxist sense, who saw women as an oppressed class struggling on behalf of their inter­ests (redefined as sexual and emotional in addition to economic), were also deep­ly influenced by The Second Sex. The political formulations that came out of this mix — the dominant tendency in Redstockings — were rich in paradox, like theologians’ explanations of how God’s divine plan is ineluctable but human be­ings have free will. Feminist materialists argued that while men’s sexual class in­terests determined their oppression of women, and in fact all men did oppress women, any individual man could choose not to oppress women. Therefore, each man bore personal moral responsibility for his acts; determinism could never be an excuse for letting men off the hook. Similarly, women submitted to men so long as they had to to avoid punishment, and resisted whenever they felt it was possible: either way, they were acting in their interest. And yet there were always women who (for what mysterious rea­sons?) chose to take risks, to step out there ahead of everyone else. Sometimes others followed, and then you had a movement.

On the question of “where interest has its source,” the feminist materialists sug­gested that the desire for survival, com­fort (including love, sexual pleasure, emotional support), and freedom all played a role. On the surface, their un­derstanding of male supremacy wasn’t much like de Beauvoir’s. In the material­ist view, men’s stake in their power over women was quite practical — it gained them money, leisure time, and domestic service, not to mention love, sexual pleasure, and emotional support on their own terms. But if you looked more closely at this list of goodies, it wasn’t quite so simple. Could you assume, for instance, that sexual dominance was inherently more pleasurable than mutual desire? Or that it made “material” sense to choose love corrupted by the concealed rage of the oppressed over love with an equal partner? Lurking behind the materialist analysis was the de Beauvoirian assumptions that oppressors were attached to power for its own sake.

For other factions of radical feminism, this assumption was quite overt. The New York Radical Feminists’ manifesto, for example, argued that men exercised power over women to satisfy their egos. As they saw it, men did not value their power because it allowed them to demand women’s services, but rather, demanded the services to affirm their pow­er. Ironically, this idea was elaborated in a way that offended de Beauvoir’s most basic beliefs about the artificiality of gen­der: cultural feminists who believed that women’s problem was the ascendancy of “male values” attributed the drive for power not to the imperialism of human consciousness but to the imperialism of the phallus.

As a Redstocking, I was basically in the materialist camp, but with a difference; I thought the best tool for understanding sexuality and family life, the keys to pa­triarchal culture, was psychoanalysis. The radical feminist movement was, of course, resolutely anti-Freudian; here, too, classical Marxist thinking merged with de Beauvoir’s. Like that other exem­plary female intellectual, Hannah Arendt, whose insistence on evaluating Adolf Eichmann in rational moral terms led her to deny his patent lunacy, de Beauvoir resisted any view of human will that challenged the primacy of deliberate moral choice. Her refusal to admit the potency of unconscious fantasy and conflict not only forced her to assume a pri­mary will to dominate; it also implicitly defined women’s response to their op­pression in highly moralistic terms. In the universe of The Second Sex, the female rebel was the existential heroine. And of course the paradigmatic female rebel was Simone de Beauvoir herself.

For many contemporary feminists, de Beauvoir’s life has been an inspiration as well as her work; indeed, her work — not only The Second Sex but the novels and the memoirs — is, among other things, a testament to a certain kind of life. It’s easy for female rebels to idealize that life, to think of it as liberated without quotation marks. But in fact de Beauvoir was no more able than the most traditional housewife to transcend or circumvent male supremacy; her path involved its own complicated set of sacrifices, tradeoffs, and illusions. Part of the price she paid for being Simone de Beauvoir was to live more in her mind than in her body. De Beauvoir never questioned the patriarchal assumption that human freedom depends on the conquest of nature. Her relationship with Sartre was, judging by her own accounts, far more cerebral than sensual. Like most women who put a high priority on independence she had no children — and while it’s a sexist fic­tion that all women want to be mothers, it’s also a fact that so long as motherhood carries drastic social penalties, the decision to avoid it (and relinquish its erotic pleasures) is not exactly free.

Self-reflection on such matters was not de Beauvoir’s strong point. Seeing herself as freer than she was, she denied the full import of her struggle — just as many of her radical feminist children, seduced by the politics of moral example, imagined they could make the revolution simply by changing their own lives. But de Beauvoir had to struggle alone; when she stepped out there, few were ready to follow. Part­ly because of her groundbreaking work, things are different now. In a sense, rec­ognizing the limitations of that work and of that female rebel’s life, is the best way to honor them. 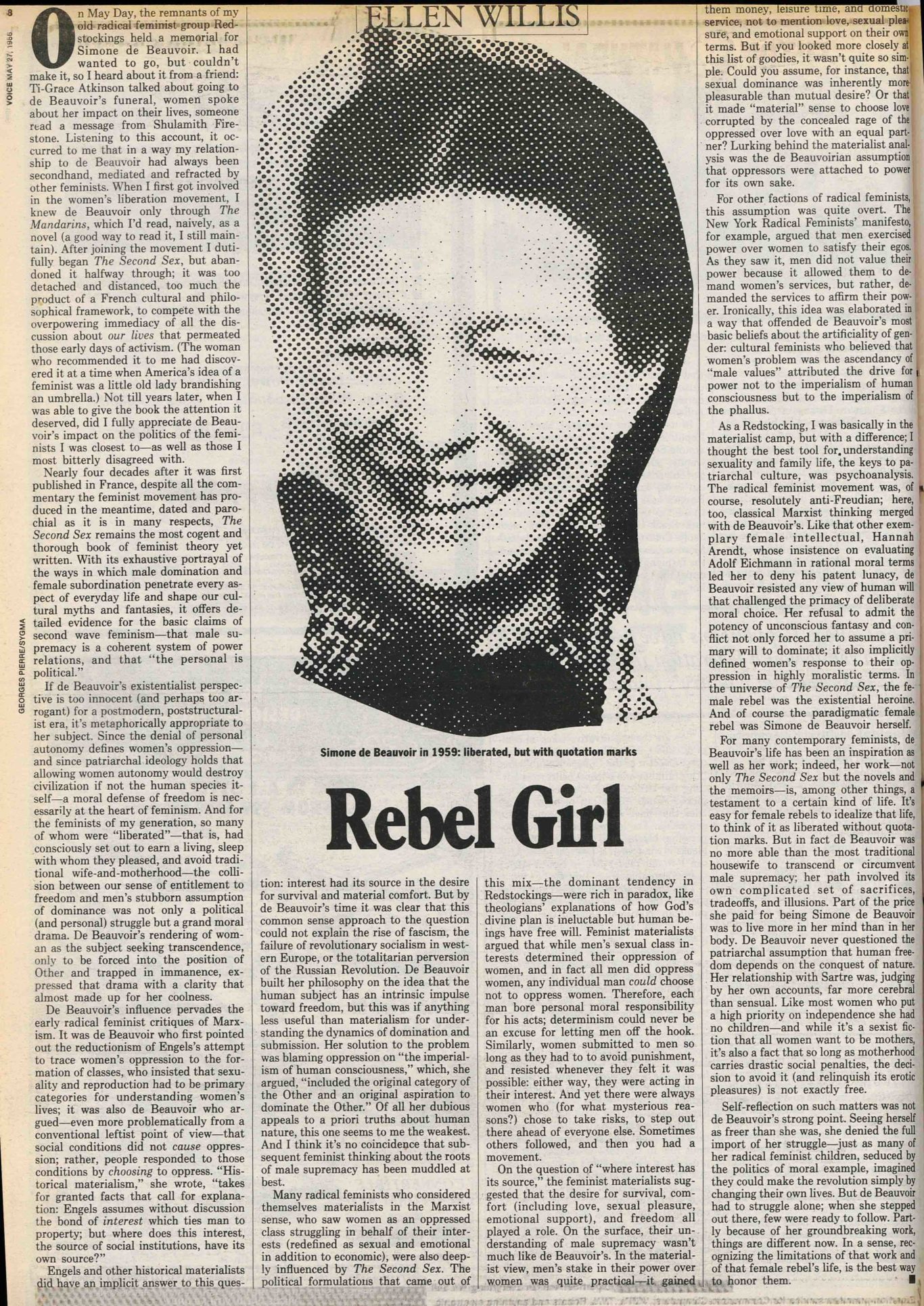