On the rap report card Kool Moe Dee stuck into How Ya Like Me Now back in ’87, the old-schooler proved an easy marker — only two of the 25 pupils fell below Public Enemy at 80 B. The token nonentity Boogie Boys got 7 or 8 in teach’s 10 categories for a 77 C+, and way below that were the perpetrators of history’s best-selling rap album, the Beastie Boys, with a 10 in sticking to themes, an 8 in records and stage presence, and a 6 or 7 in vocabulary, voice, versatility, articulation, creativity, originality, and innovating rhythms. Total: 70, barely a C.

You can laugh off these grades, but with Moe Dee’s archival L.L. Cool J tied for fifth at 90 A, they did represent his sincere attempt to formalize the values of his fading artistic generation — values upended by Public Enemy and the Beasties. A career nondropout who earned a communications B.A. while leading the Treacherous Three, Moe Dee idealized upright manliness; having come up in a vital performance community, he didn’t consider records important enough to mark for hooks, mixing, sampling, pacing, innovating textures, and what have you. Like most rock pioneers, he couldn’t comprehend the upheaval he’d helped instigate: a music composed in the studio by copycats so in love with rap that they thought nothing of stretching it, mocking it, wrecking it, exploiting it — going too far, taking it up and over and out and around, making it better.

If Public Enemy was a threat — collegians with a radical program, arrogantly burying their pleasures deep — the Beasties were an insult; they dissed everything Moe Dee stood for. Sons of the artistic upper-middle class (architect, art dealer, playwright), they laughed at the education Chuck D made something of and Moe Dee strove for (two years at Bard, a term at Vassar, two hours at Manhattan Community). Like millions of bohos before them, they were anything but upright, boys not men for as long as they could get away with it. As born aesthetes, they grabbed onto rap’s musical quality and potential; as reflexive rebels, they celebrated its unacceptability in the punk subculture and the world outside. And of course, they were white in a genre invented by and for black teenagers whose racial consciousness ran deep and would soon get large.

The way the Beasties tapped the hip-hop audience says plenty for the smarts and openness of their black manager and the black kids he steered them toward, but also testifies to their own instinct and flair. From Anthrax to Maroon, those few white imitators who aren’t merely horrendous don’t come close to the Beasties’ street credibility. We were probably right to credit Rick Rubin with all the what-have-you that as of late 1986 made Licensed To Ill history’s greatest rap album, but in retrospect one recalls the once-fashionable fallacy that George Martin was the fifth Beatle. Certainly the Beasties’ unduplicable personas and perfect timing were what Rubin’s expansive metal-rap was selling, and most likely a fair share of the music was their idea. We didn’t think they could top themselves not because they were stupid or untalented — except for a few cretins in the Brit tabloids, nobody really believed that — but because their achievement was untoppable by definition. Outrage gets old fast, and rap eats its kings like no pop subgenre ever.

Lots of things have changed since late 1986. The Beasties’ street credibility dimmed as “Fight for Your Right” went pop and Public Enemy turned hip-hop to black nationalism. Due partly to the Beasties and mostly to how good the shit was, Yo! MTV Raps brought black rap to a white audience. History’s biggest-selling rap single (and first number-one black rap album) was recorded in L.A. by a former repo man. After feuding with his black partner, Rick Rubin transmuted into a metal producer, and after feuding with their black manager, the Beasties became Capitol’s first East Coast rap signing since the Boogie Boys. Chuck D. and Hank Shocklee undertook to mix up a since-aborted album of the Beasties’ Def Jam outtakes. And if the Beasties’ Paul’s Boutique doesn’t top Licensed To Ill, though in some ways it does, it’s up there with De La Soul in a year when L.L. Cool J is holding his crown and Kool Moe Dee is showing his age.

Avant-garde rap, Licensed To Ill was pop metal, foregrounding riffs and attitude any hedonist could love while eliminating wack solos and dumb-ass posturing (just like Kool Moe Dee, metal fans think David Coverdale has more “voice” than Johnny Thunders). Paul’s Boutique isn’t user-friendly — I don’t hear a rock anthem like “Fight for Your Right,” or street beats like “Hold It, Now Hit It”’s either. But give it three plays and a half a j’s concentration and it will amaze and delight you with its high-speed volubility and riffs from nowhere. It’s a generous tour de force — an absolutely unpretentious and unsententious affirmation of cultural diversity, of where they came from and where they went from there.

For versatility, or at least variety, they drop names: check out the names they drop: Cezanne, Houdini, Newton, Salinger, Ponce de Leon, Sadaharu Oh, Phil Rizzuto, Joe Blow, Bob Dylan, Jelly Roll Morton, Jerry Lee Swaggart, Jerry Lee Falwell. Or the samples they exploit less as hooks than as tags: Funky Four Plus One (twice), Johnny Cash, Charlie Daniels, Public Enemy, Wailers, Eek-a-Mouse (I think), Jean Knight, Ricky Skaggs (I think). For innovating rhythms, there are countless funk and metal artists I can’t ID even when I recognize them. For vocabulary, start with “I’m Adam and I’m adamant about living large,” or maybe “Expressing my aggressions through my schizophrenic verse words” (rhymes with curse words), then ponder these pairings: snifter-shoplifter, selfish-shellfish, homeless-phoneless, cellular-hell you were, fuck this-Butkus. Not what Moe Dee had in mind, of course. But definitely what all avatars of information overload have in mind, or some of it: “If I had a penny for my thoughts I’d be a millionaire.”

These Beasties aren’t as stoopid or stupid as the ones Rick Rubin gave the world (or as Rick Rubin). In fact, one of the most impressive things about Paul’s Boutique is what can only be called its moral tone. The Beasties are still bad — they get laid, they do drugs, they break laws, they laze around. But this time they know the difference between bad and evil. Crack and cocaine and woman-beaters and stickup kids get theirs; one song goes out to a homeless rockabilly wino, another ends, “Racism is schism on the serious tip.” For violence in the street we have the amazing “Egg Man,” in which they pelt various straights, fall guys, and miscreants with “a symbol of life”: “Not like the crack that you put in a pipe/But the crack on your forehead here’s/A towel now wipe.” Hostile? Why not? Destructive? Not if they can help it without trying too hard. They’re not buying.

Just to dis Def Jam — check “Car Thief,” which also takes on the presidency — the Beasties couldn’t have picked more apposite collaborators than L.A.’s Dust Brothers, one of whom co-produced the aforementioned number-one rap album. But where Loc-ed After Dark is simplistic, its beats and hooks marched out one at a time, Paul’s Boutique is jam-packed, frenetic, stark. It doesn’t groove with the affirmative swagger of Kool Moe Dee or L.L. Cool J, and its catholicity is very much in-your-face — as is its unspoken avowal that the music of a nascent Afrocentrism can still be stretched (mocked? wrecked?) by sons of the white artistic upper-middle class. Having gotten rich off rap, the Beasties now presume to adapt it to their roots, to make Paul’s Boutique a triumph of postmodern “art.” Their sampling comes down on the side of dissociation, not synthesis — of a subculture happily at the end of its tether rather than nascent anything. It impolitely demonstrates that privileged wise guys can repossess the media options Moe Dee was battling for back when they were still punks in prep school. After all, this deliberately difficult piece of product will outsell Knowledge Is King. One can only hope Moe Dee is race man enough to take satisfaction in its failure to overtake Walking With a Panther, or Loc-ed After Dark. 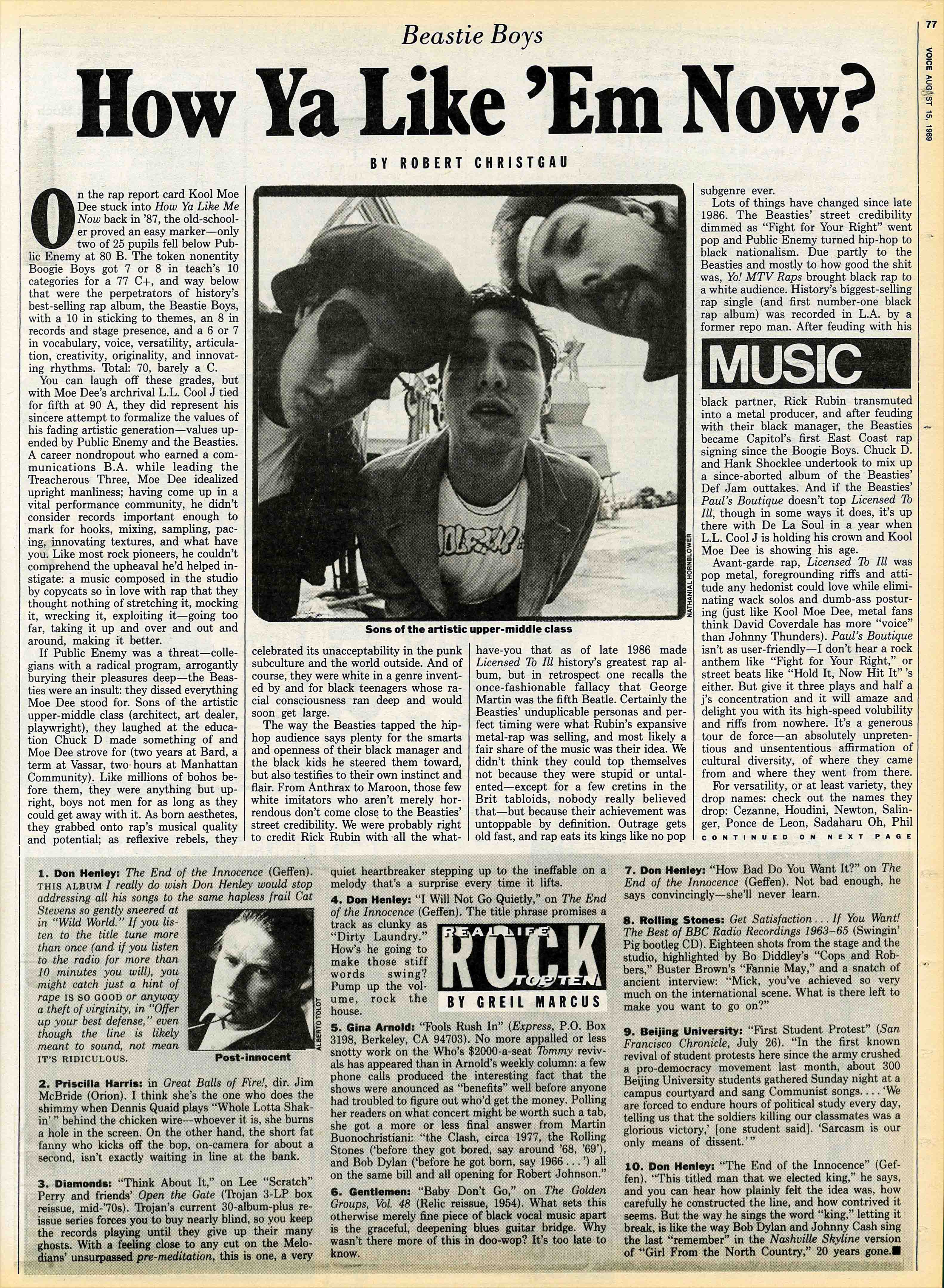 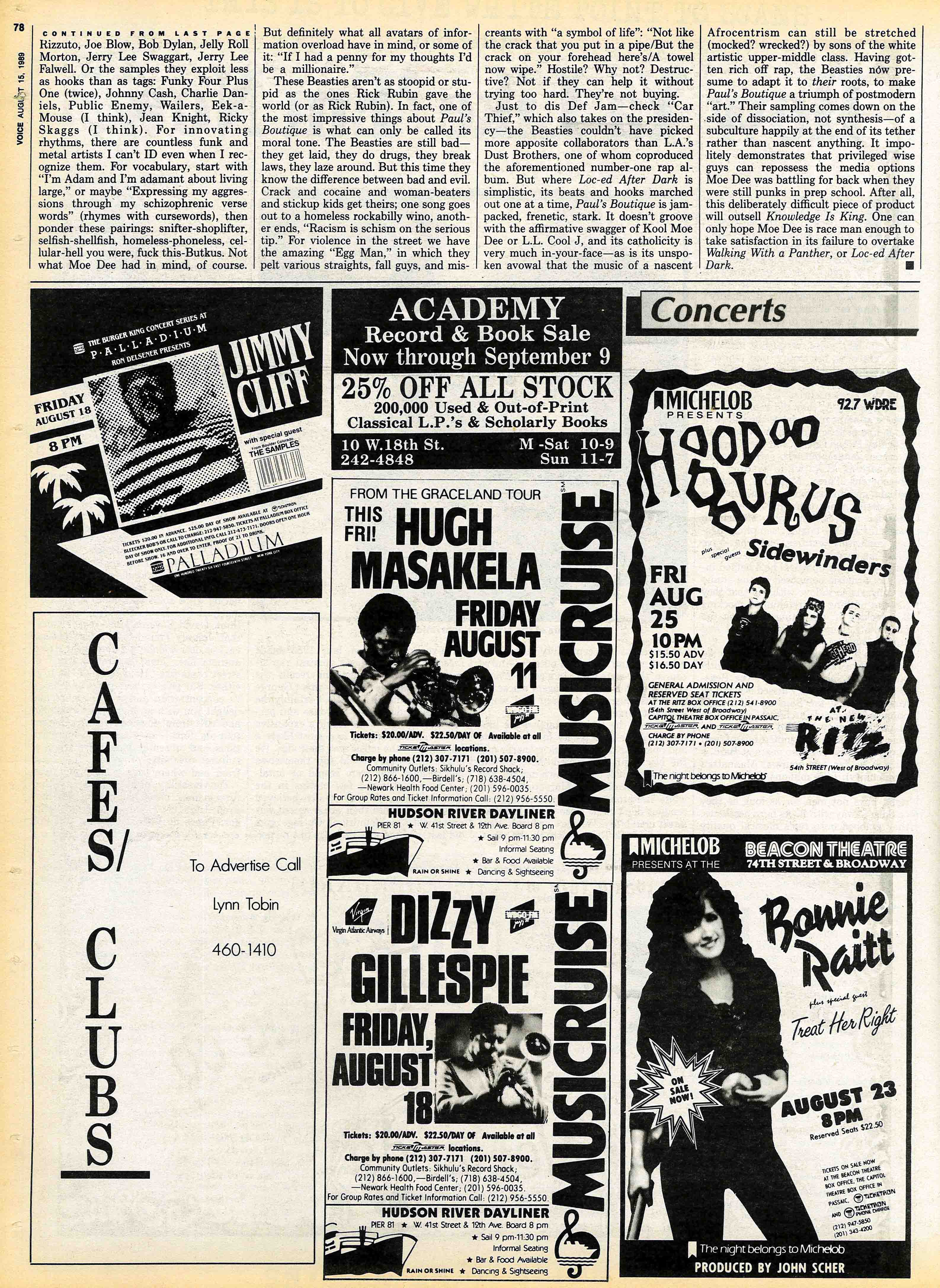