The way Bobby Kennedy told it in his book, The Enemy Within, it was all very sinister. Joey Gallo showed up for a private pre-hearing interview in a black shirt, black shoes, and black suit, scuffed the office rug with his foot, and said, “This would be a nice place for a crap game.” The way the surrogate Nicely Nicely told the story subsequently in the Corner Bistro was, if not more accurate, certainly more entertaining. “I read that bullshit,” he said, “and just for openers I didn’t have a black shirt on. I was wearing a one-buck work shirt I picked up at an army-navy story on Sixth Avenue.

“The first thing he told me was if I helped him get Hoffa” — the occasion was Gallo’s 1958 appearance before the Senate Rackets Investigating Committee, Robert Kennedy counsel — “I’d never want for nothing. When I told him the hell with that and that I was going to take the Fifth he said: ‘You’re not so tough — I’d like to fight you myself.’ And when he came around from behind his desk and started to peel off his coat, I told him, ‘I don’t fight,’ and I reached in my pocket and pulled out a mezuzah that Sid Slater had given me and shoved it in his face.”

Joey laughed at the thought of using a mezuzah on Kennedy as one might use wolfbane on Lon Chaney, Jr. Laughter was central to his life, the private life he lived in the Village apart form the cruelties which were his public life. Without defining it, Joey’s private role playing had him as Dick Powell playing the last Billy the Kid, the white Malcolm X, but he loved to laugh at himself if anyone was paying attention and attention was compulsory. Sitting once in the late Waverly Lounge in the Earle Hotel he said: “My brother Larry’s public enemy number one or number two — I forgot which because I’m the other one.” Then he emitted a small laugh, one with an edge on it because it was 1962 and he was on trial, and he turned to Laurie Brewis, who is also late and was then piano player, and said, “I’ll bet the papers are out now,” and Laurie who was small but no smaller than Joey, scuttled out to Sixth Avenue as if someone were shooting at him and came back with the Mirror and the News and both had lengthy stories about the trial of Crazy Joey.

He explained his name that night and it made perfect sense to Leo, who owned the bar. “They put me in this nut factory, the Kings County Hospital,” he said, “because they wanted to keep me for 90 days and they didn’t have any other way to do it. So this doctor came around and showed me something and asked me what it looks like. ‘It looks like somebody spilled ink on it and folded it over,’ I say, and so they say I’m crazy. I say to the doctor that he’s paid by the taxpayer’s money and so is the D.A. and so is the police commissioner and I’m not talking to any of them and they tell me I’m crazy again. I pass my time painting and they come around with my paintings and they say, ‘Would you like to live in a house like this?’ If I could answer questions like that I would be crazy.

“Finally I tell the doctor, ‘You tell me I’ve got a persecution complex. Well, it happens that I am persecuted.’ But I tell him, I’ve got a lot of friends. He asks, ‘Are you threatening me?’ Well, I told him I wasn’t but you know what? He gave me better marks than my own shrink does. Does that sound crazy to you?”

Joey loved the Village as only those who move here from some other where can. He spoke of his Brooklyn home as someone else might speak of Ashtabula. In the late ’50s and early ’60s, when he was at war with the Profacis, it used to be a regular police number to run over to 49-51 Pres­ident Street in Brooklyn, the of­fice of his Direct Vending Machine Company and, upstairs, what was known as the Dormitory for his associates, and pick up maybe a couple of dozen of his friends, then to scour the Village and Little Italy looking for Joey. One night he issued a blanket invi­tation to everyone in Jack Barry’s to breakfast with him at Luna’s at 112 Mulberry Street — half a block from where he was killed the week before last — and when he was told the cops were looking for him he and everyone else went out the back. The only reason a participant remembers the event is the sight of Gallo boosting a lady over a fence, an event sexually stirring for the onlooker, if not the lady.

Joe lived for a time at 63 East 11th Street but his last home before he went up was in a build­ing now gone next to the Ameri­can Youth Hostel, also now gone, where there is now a series of shops at 14 to 22 West 8th Street. He lived there, in a ground floor apartment, with his wife, Jeffie, when they ran into Jeffie’s first husband, Gerry Mulligan, who was playing at the Village Vanguard. It must have been a bad split because, Joey said, laughing, “He looked me up and down and then he turned to Jeffie and said: ‘You must have scoured the gutters of the Village to find somebody lower than a jazz musician.’ ”

Joey got sent up, he always maintained, on a bum rap. It was extortion and he freely admitted — cheerfully admitted might be more accurate — that he was trying to extort money from a man named Ted Moss. The thing was, Joey said, that the cops said he was trying to extort a piece of Moss’s bars. One night in one of the bars, the one at the corner of 12th Street and University Place, where Shine’s was later, he ges­tured to the only other customer in the bar and said: “Look — this joint takes in maybe $150 a week. Do I need to muscle a guy for a lousy $75? But the bastard is shylocking and this is my territory. Let him keep his fucking bars but let him keep out of my business.” The cops, Joey claimed, couldn’t admit in court that they were talking about shylocking so they doctored their telephone tapes. He stood mute, thinking that he would win on appeal, and did 10 years as a result of that mistake.

Even that mistake was made with a little Gallo panache. His lawyer, David Price, was ill and Joey asked for a continuance. General Sessions Judge Joseph A. Sarafite refused and, instead, ap­pointed a lawyer, Irving Men­delson, to defend him. Joey took Mendelson aside and said, “That goddamned dago judge is never going to give me a fair shake.”

When Mendelson said Sarafite certainly would give him a fair shake and that he could vouch for it because the judge was a lifelong friend, Joey said: “You just told me all I want to know” and thereafter refused to speak to the judge’s lifelong friend. Sarafite subsequently hit Joey with the maximum possible sentence.

His daughter was born after he was sent up and Joey refused to see her or Jeffie on the theory that he was in and they were out and the hell with it. On a train back from Ocean Beach one summer Jeffie explained all that and said that when Joey got out the baby would be in her teens, she would be in her 40s, and that they both needed someone to love them. “But who?” she asked. “Would you marry me?” There was laughter and Jeffie laughed, too, and then said: “That’s the trouble. Who’s going to marry Joey Gallo’s wife, the chief of police?” She did have something of a problem, one that was resolved only when Joey gave her specific permission to get a divorce and re-marry.

New York is a tough town and no one who remains alive ever knows quite how tough. Sid Slater, who gave Joey the mezuzah he flashed at Bobby Kennedy, turned out later to have been something other than what Joey used to call his “token Hebe.” He was also Frank Hogan’s token fink, and it may be a mark of Joey’s class that when he had him beaten he had him beaten in the Copacabana. But Sid was a gangster and one night he left Joey’s apartment with Pat Wilson, the singer, and another friend, and started walking own MacDougal Street. He heard a heavy clomp of running feet behind him, reached into his coat, pulled out his piece, and whirled around to discover a Villager running to keep up with his Dalmatian who never knew how close he came to meeting Mr. Death.

Now that Joey is dead it seems to be a popular idea — perpe­tuated, it would seem, by his sup­posed biographer — that he be­came bright only in prison where he is said to have read Camus and Sartre. Men do not become bright in their 40s by reading books in li­braries. Joey was sitting in the late Jericho Tavern on Sixth Ave­nue one day talking about a certain Lieutenant Hoffman who had raided the Dormitory on Pres­ident Street the night before. He was asked if it was the same Hoffman who, as a detective, had picked him up for running a dice game when he was 16. “‘Yeah,” Joey said. “I forgot about that. You know, that son of a bitch is playing ‘Les Miserables’ with me.” Joey had read books before he went to prison.

When Joey got out of the can last May he moved to 14th Street and, after the shooting of Joe Colombo, found himself suddenly an object of radical chic by those who had gotten bored with the Panthers. He talked into tape re­corders and sent miles of tape up to Viking to be written by anonymous editors and, one must think,­ in the fastness of the night he laughed. 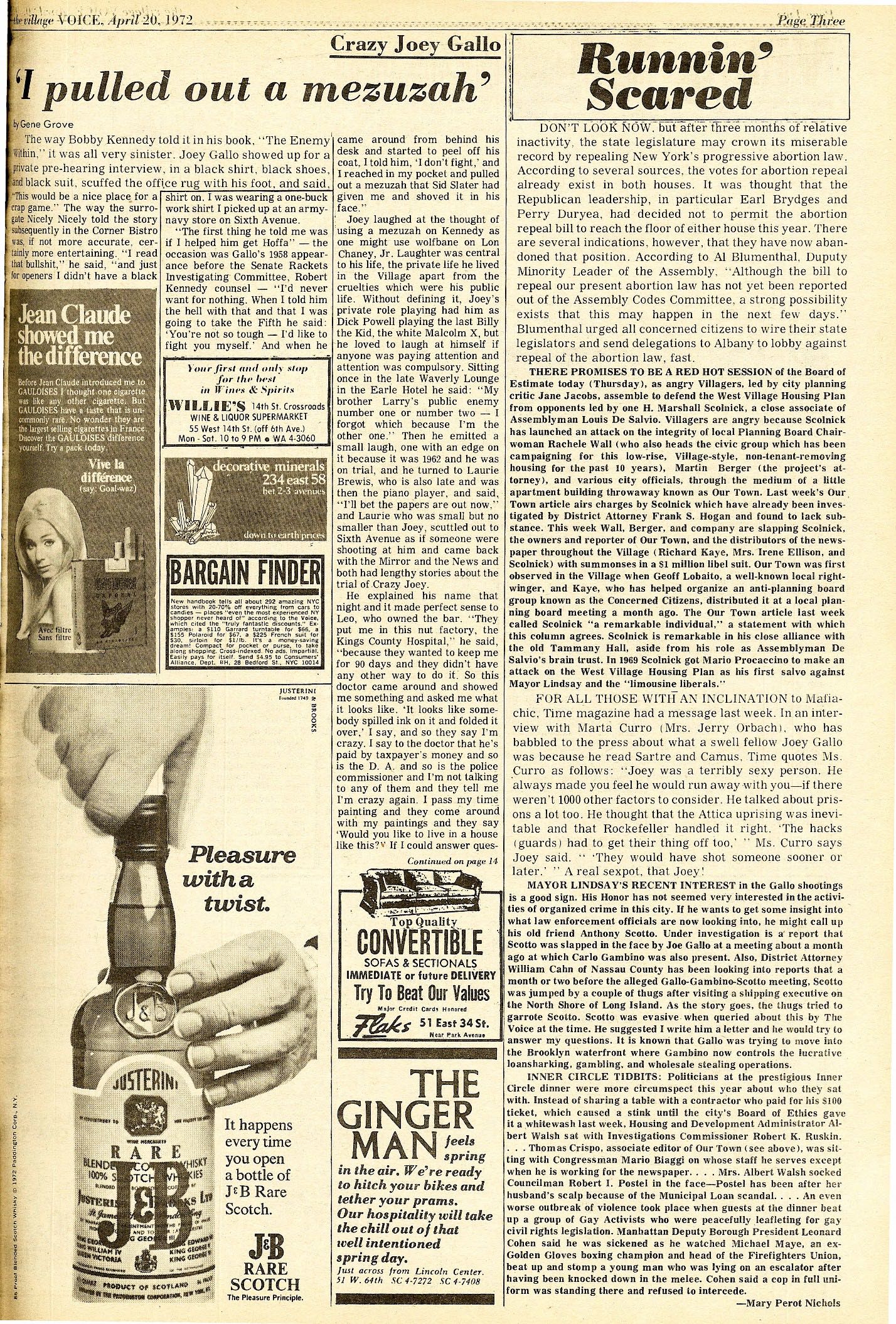 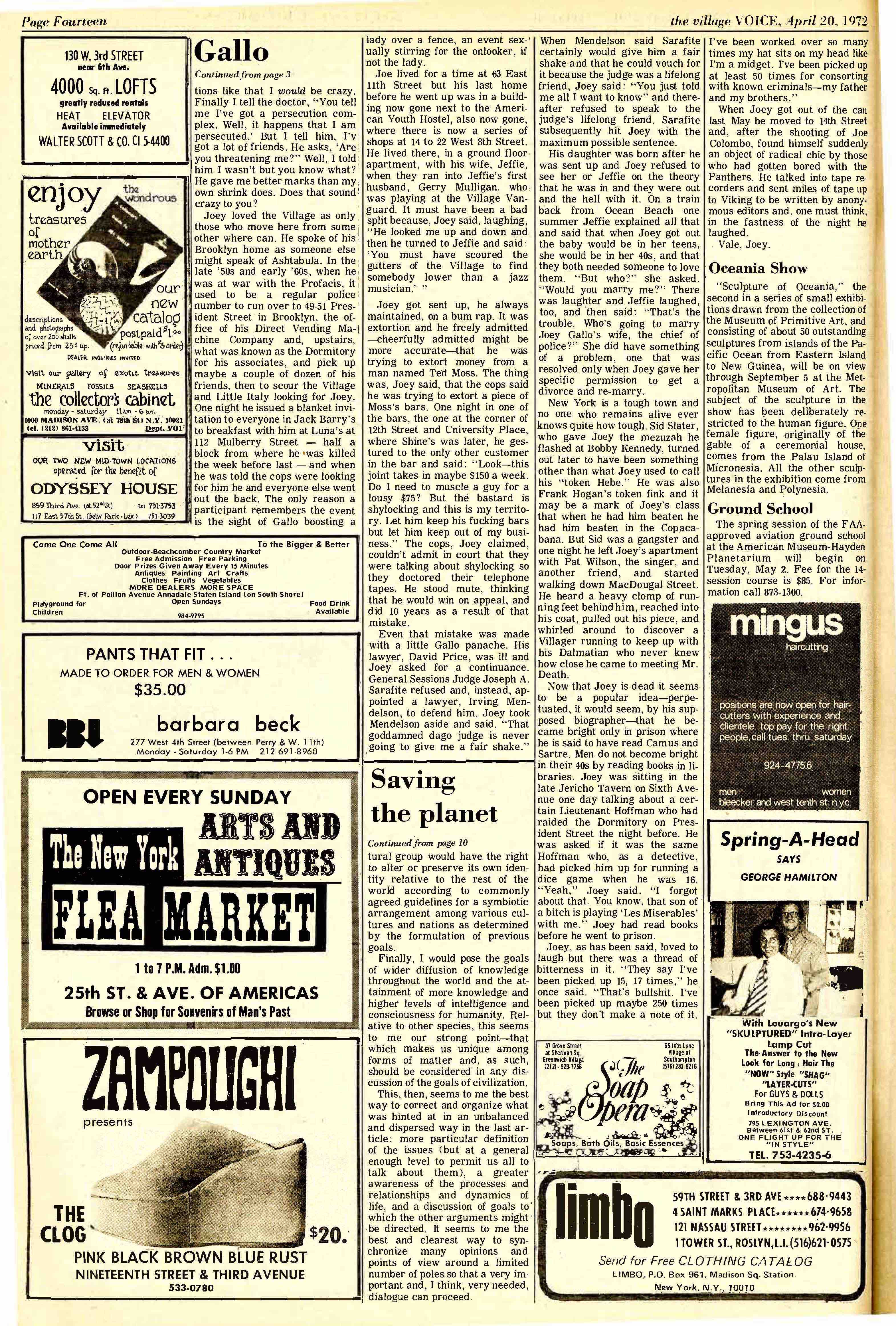