"On a freezing Friday night I visit Kings County Hospital. Depression hits as soon as I walk through the front doors"

Last December Robert Baldwin was brought to Kings County Hospital with lumps, bruises, and facial lacera­tions. The nine-year-old boy’s father wanted him treated quickly and released. The boy’s doctors wanted him kept at the hospital. They suspected Robert was the victim of parental abuse.

The doctors frantically tried to locate a Social Service worker to intercede on behalf of the state, having no power themselves to hold a child without the parent’s consent. But no one was on duty. Six of the 11 Social Service workers assigned to Kings County had been lost through budget-tightening attrition. Robert Baldwin went home.

A month later he was back in Kings County — dead on arrival. His head had been bashed in. His father was indicted for murder.

Robert Baldwin was one of over a million people who last year came to Kings County Hospital in Brooklyn’s East Flatbush seeking medical attention. In New York City, if you are poor and sick, you go to one of the 17 city hospitals. In Brooklyn, for many, that means Kings County.

At least 50 per cent of the patients at KCH, as it is commonly called, use the institution as their family doctor. The hospital treats them for anything, from a common cold to lung cancer. The majority of the patients are minorities on Medicaid, many are old. Few middle-class whites go there by choice. Those who do are usually accident victims.

On a freezing Friday night I visit KCH. Depression hits as soon as I walk through the front doors. The walls are chocolate brown, and hard fluorescent lights bathe the large lobby. Vending machines offer a selection of processed junk — soda, candy, potato chips, bad coffee. The information/registration booth is jammed with seven staff people watching television. Off to the left of the lobby is a door leading to the long corridor of the emergency room. A sign bears the legend: HOSPITAL STAFF ONLY: NO VISITORS ALLOWED. I walk through the doors, no questions asked.

The long corridor is in a state of commotion. An old man being administered oxygen through a face mask is wheeled by. Nurses carrying clipboards try to meet the demands of the patients and their friends and relatives, who are clogging the corridors. NO SMOKING signs are every­where. So are people smoking: cops, patients, doctors. Three doctors are leaning against the wall outside the X-ray room, waiting for negatives. A badly battered black woman is wheeled by on a stretcher. She looks like she has been beaten, for both her lips are badly swollen. She is wheeled into the Female Treatment Room.

“The chicks that come in here,” one young doctor says. “Christ, you’re lucky if you can find one that isn’t all used up. It’s as hard as finding a good car at a police auc­tion.”

The other doctors laugh.

A Hispanic man in his mid-thirties limps toward me. He hands me a set of papers. He assumes that because I am white I am a hospital official. It isn’t a bad assumption. The only other white faces belong to cops, doctors, and nurses.

I take his papers. His name is Miguel Avilla. On the form his ailment is recorded in a chicken scrawl of medical jargon. But I manage to make out one word — kidneys. I ask Miguel if his kidneys are bothering him. He nods yes. I ask how long he has been waiting. He tells me since 7 p.m. It is now 10:15 p.m.

I walk over to a group of cops hanging around. Some are here with prisoners. Two of the cops have suffered injuries while making an arrest. Nothing criti­cal — a dislocated shoulder and a sprained hand. Patrolman Gene Getlin from the 71st Precinct is taking a statement from the two injured cops.

“They’re never gonna believe this statement, you know,” Getlin tells his colleagues. “I mean you guys were assigned to community relations tonight and you wind up rolling down a flight of stairs with a couple of punks. You gotta write it down in plain fuckin’ English or else the dummies at the review board will break your balls.” The two cops tell him that shots were fired but no one was hit. It is unclear who did the firing. One of the injured cops is infuriated because the doctor is treating his prisoner, and he wants to go home.

There are two prisoners. One is black, no more than 18. His face is badly beaten. The other is a Hispanic, also badly beaten, wearing torn leather shoes without any socks. He has on a T-shirt and a ski jacket. Both are handcuffed behind their backs as they are being examined.

I ask a nurse if keeping prisoners in shackles is standard procedure. “I’m afraid it is, honey,” she says.

The injured cop is now ranting: “They’re not even supposed to examine prisoners and arresting officers in the same room, for Christ sakes,” he says. “That directive came down last year. But there they had me sittin’ on one bed and the two punks on the other. The doctor, he asks the Spanish guy, ‘What did he hit you with?’ The spic tells him, ‘With everything.’ I shoulda hit him with a tank, the prick.”

A sobbing black man hobbles along. His sneakers are untied and the laces are wet with mud. His face is a moonscape of deep pockmarks.

I ask him his name. Between sobs, he manages to tell me that it is Jackie Green and that he is 47 years old. I give him some tissues to wipe his eyes and nose. Instead he hocks up an inch of oxblood-colored phlegm and spits it into one of the tissues.

I ask him why he’s here.

“A shot of… for my equal librium.”

“I already seen a doctor. I walked out because I know they’ll put me in that other place. Where they put me before. The place with the bars on the windows. But I didn’t do nothin’ wrong. I can’t breathe and I’m shaking in the morning. So I’m goin’ home.”

“The one near where I live.”

I tell him to sit while I go to get him help. I ask a nurse if someone can treat him. She tells me that no one can understand what he’s talking about. When I return to the waiting room, the chair where he was sitting is empty — except for the two used tissues.

Karl Adler, an energetic man in his early forties, has been head doctor of adult emergency for the past two and a half years. I ask if staff morale is hard to maintain.

“It isn’t easy,” he says. “We’ve suffered major cut­backs. When you run out of certain medicines and materials — along with a total lack of ancillary care or support services — it can become unbearably frustrating.” There have been cases in which a patient was prescribed antibiotics when they were not needed, because there was no microcosmic urine analysis or no patient case history. Records are not kept. In fact, one of the major problems at KCH is record-keeping. The people who once kept records here have all been lost through attrition. So there are no statistics on things like gunshot victims, knifings, rapes, malnutrition, drug overdoses, or suicides. But Adler insists that health care at KCH is good — “as good if not better than most private hospitals in the city.”

“Sure there are long waiting times and the amenities might be awful,” he says. “But everyone is treated the same. In fact, when President Ford was campaigning here in Brooklyn, someone from the Secret Service came in and asked what kind of treatment Ford would get if he was injured. I told him he’d have to wait like everyone else.”

Clarence Darden is sitting in a wooden wheelchair. He tells me he has been awaiting treatment, since 9 a.m. It is now 11:30 p.m.

“I’m hungry enough to eat me a fuckin’ kangaroo,” Clarence says. “I’ve been sittin’ on this hard-assed fuckin’ chair all damned day and they ain’t give me nuthin’ to eat, man. Shit.”

I ask him what kind of work he does.

Clarence receives $47 every two weeks from welfare now. His monthly rent is $52. He takes out his wallet to show me his Medicaid card. There is a photograph on it of a man named Clarence Darden who doesn’t look a day older than his 35 years, dressed in the quality clothes you wear when you have been working for awhile. The man in the wheelchair has aged 15 years in the past 12 months.

I ask him what is troubling him now.

“My back again,” Clarence says. “I was comin’ home from my uncle’s funeral. My uncle was mugged and got himself stabbed to death. He was an old man, they didn’t have to kill him. You know what I mean, mugged? Well, I’m comin’ home and I slipped on some ice and I hurt my spine or my back, I don’t know which one. It hurts like a sonabitch. You heard about my uncle right? Everybody in the neighborhood did.”

Across the lobby is the pediatric emergency room. A doctor tells me that many children suffering from cold weather afflictions such as exposure, frostbite, and asthma are being brought in. One very young black child, in her mother’s arms, is coughing and wheezing heavily. Congested, impacted phlegm is mauling her small lungs. She cries in bewilder­ment. The mother speaks into a pay phone, explaining to a friend in a melodic Jamaican accent that she is at the hospital because her apartment is so cold the child became ill. “I haven’t been as warm as I am right now in weeks,” she says: “You know, I hate to say this, but I wish my baby was even sicker. I wish she was sick enough so they’d have to admit her into the hospital. At least then she’d be warm.”

This article from the Village Voice Archive was posted on March 27, 2020 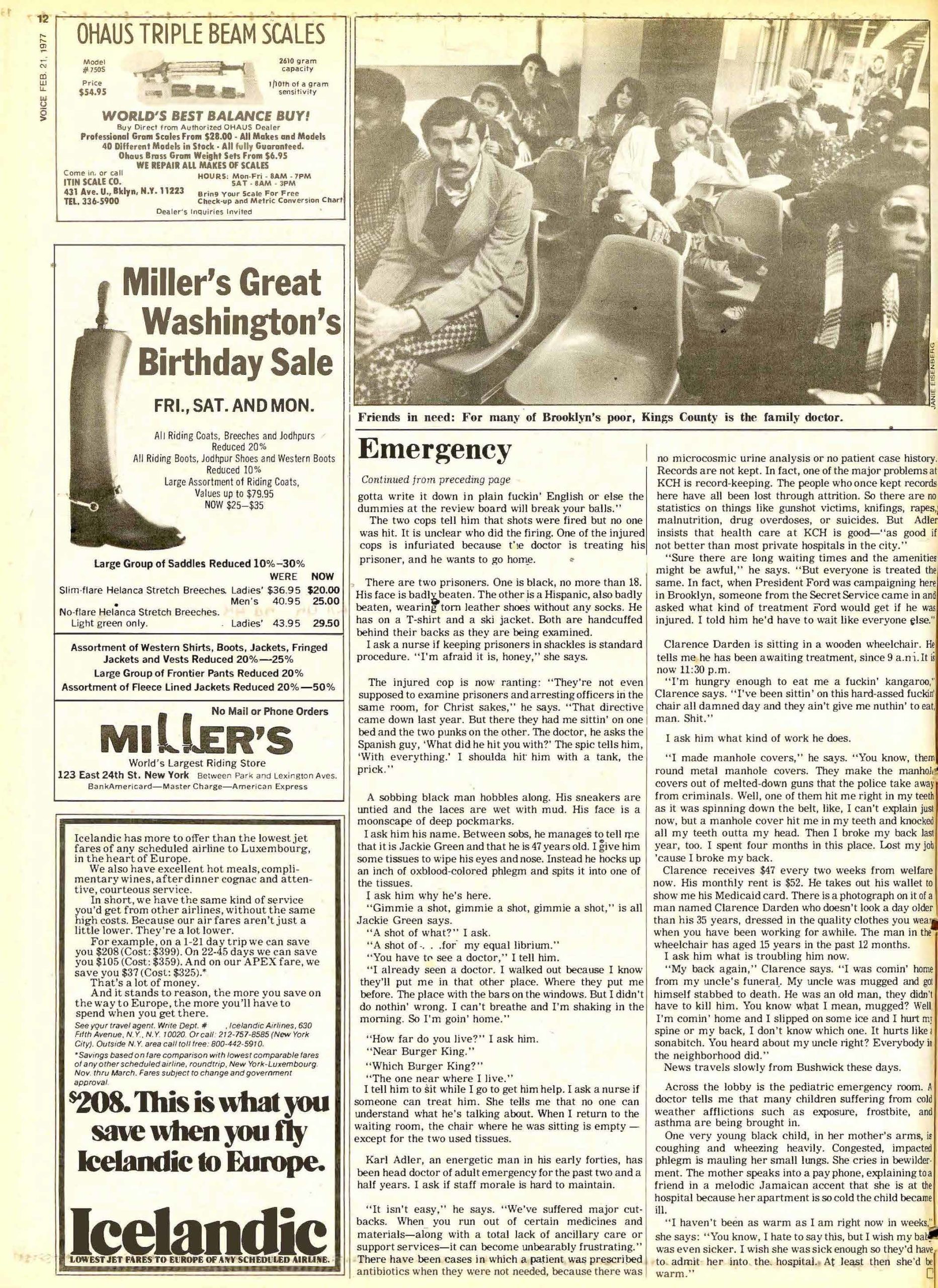