Dropping In on the Grateful Dead

“I am, or have been, a certified Grateful Dead freak; I don’t know how many Dead concerts I’ve attended, but it has to be more than 25, which for this record addict is a record. What’s more, I never made a conscious decision to lay off.”

I tried to roll a joint before walking over to the Palladium to see the Grateful Dead for the first time in four years last Friday, but ended up asking my wife to do it. I’d never mastered the knack, even when I was in practice, and this would be the third or fourth time I’d smoked my own grass in — hmm — about four years. All of these instances, I should add, have taken place since I made a buy in honor of Graham Parker’s Palladium appearance last De­cember. Turn on, tune in, drop in.

I am, or have been, a certified Grateful Dead freak; I don’t know how many Dead concerts I’ve attended, but it has to be more than 25, which for this record addict is a record. What’s more, I never made a conscious decision to lay off. In fact, the last time I’d seen them, at Nassau Coli­seum shortly after Pigpen’s death in March, 1973, I couldn’t tear myself away from “Sugar Magnolia” and go write my review, while the time before — Roo­sevelt Stadium in July, 1972 — I had left with some relief (and no deadline) during the same song. Yet somehow I never got back. I continued to admire the staunch commu­nalism of Jerry Garcia’s countercultural values, but their spaced-out myopia of these values became harder and harder to take as history got harsher and harsher. A parallel spaceyness was increasingly ap­parent in records I struggled — and eventu­ally failed — to find praiseworthy. With Pigpen’s r&b pulled out by the roots, the Dead’s music was defined by Bob Weir’s strained rockabilly when it touched earth at all. What a combination — a ’60s nostalgia trip in the attenuated country-rock mode of the middle ’70s. So what if they ran their own record company? I was better off savoring my memories.

It was basically to check out these memories that I went to the Palladium. Anti-psychedelic propaganda notwith­standing, Dead heads tend to be quite bright. But it should go without saying that the group inspires (and attracts) enlightened hipness rather than analytic acumen or musical savvy, which means that most of my acquaintances remain decidedly unconverted. When the Dead applied for State Department assistance on an Asian tour last fall, I found it impossible to locate cuts on either of two relatively strong albums that would convince a panel of open-minded jazz and folk professionals that the band was worthy. In that skeptical context, Jon Landau’s old charges about “absence of a lead singer with a competent voice” and “no drive” became quite vivid. I went home and put on Live/Dead, once one of my favorite records; it sounded aimless. Even Workingman’s Dead, their best-made LP, lacked punch. I began to wonder whether my former fanaticism was based on anything more substantial than good dope, and misconstrued vibes.

When we arrived at the Palladium at 8:30, punctual by Dead standards, the music had already begun, and the vibes were unmistakable — hair was shorter, but the eyes had that old glow. The music sounded good, too; even skeptics find something nice to say about Garcia’s gui­tar, and he was ringing through the smoke as we took our seats. The tune — from Blues for Allah, their worst, most recent, and biggest-selling studio LP — was predictably desultory. But when a Dead jam climaxes properly, Garcia’s keen lines transfigure the surrounding babble into a strain of polyrhythmic rhapsody not ordinarily encountered at the Palladium or anywhere else. I was aware, as this climax recurred three times in the course of the song, that I was being subjected to the Dead’s basic tension-and-release trick, but that didn’t make me enjoy it less. Unfortunately, nothing exhilarating occurred during “New, New Minglewood Blues” — or the always long-winded “Tennessee Jed.” In fact, I was quite bored, and not in the spirit of friendly rumination I used to love them for eliciting — I was worrying how long they’d play. Not until Garcia’s opening solo on a Donna Godchaux feature did anything interesting catch my ear. I decid­ed to toke up immediately. And immedi­ately the concert got better.

But I swear that it really did get better. In any case, cheers and whistles from the audience increased in loudness and number, and mine were among them even though the effect of the dope was not to bring me into the music but to put me more attentively outside it. I noticed with some disapproval, for instance, that the ripple effect I’d always admired in Garcia’s playing was achieved, at least this time, by an improvisationally elementary device: He was running triplets up and down the scale, four at a time, so that when he merely held a single note for two beats the contrast was arresting almost by definition. Soon, I also noticed, however, that into all this repetition he was sneaking a few very attractive melodies. Then, for the final raveup, he suddenly attacked the guitar with a bluesish (almost Jamesian) slash that made all that rippling melody seem a diversion in subliminal retrospect. We’d been set up, and we loved it.

Joints were shared by strangers during the half-time intermission, a rite now rare enough at concerts to be newsworthy. But although the dope continued for the rest of the show, it was the two numbers that opened the second set — Gary Davis’s “Samson and Delilah” and a long, slow “Sugaree” — that were the high point. Only “California,” which sounds like their first groundbreaking new song in at least five years, and Garcia’s transmutation into Chuck Berry on the flaccid (and too well­-received) finale, “Around and Around,” really turned me on. But when the cheering stopped it was 12:45. My wife and I would both have sworn it was an hour earlier.

In other words, although this was not (for me) a great Dead concert — great Dead concerts finish in total abandon — it kept me occupied the way nobody’s concerts do anymore, not for two hours, much less four. Appropriately, my number one occupation was figuring out just what the Dead are and have been. Clearly, not your textbook Great Rock and Roll Band. They do lack drive; even at the climaxes they roll rather than rock. Their good drummer, Mickey Hart, is into jazz rhythms, and their ordi­nary drummer, Bill Kreutzmann, has never had the chops to push the band, although since Phil Lash plays bass strictly for lyrical input and harmonic guidance, pushing the band would be uphill work for Steve Gadd or Keith Moon.

More complex is the issue of vocal competence. By their own standards, the Dead learned to sing — to project their voices — around 1969. Their equipment has never been overwhelming; even Bob Weir, the loudest, has always wavered slightly. But insofar as they are incompetent, it is not as singers, but as lead singers — they project voice but not character. They do add the appropriate emotional color to the words and notes, of course — weary plain­tiveness, happy energy, whatever — but the color is there for musical rather than dramatic reasons; even when Weir shouts out “One More Saturday Night,” to choose the most far-fetched example available, there is something slightly detached about his ebullience. This deadpan quality is much more apparent in a typical perform­ance by Garcia or Donna Godchaux (who has moved from pianist’s wife to backup chick to part-timer in good standing); it often makes Weir’s own “El Paso” seem oddly off. By instinct or design the Dead refuse to provide the easy psychological referents that most people (including me) seek in vocal music. What’s left is the music itself. Performing personas­ — Weir’s callowness, which becomes ever harder to tolerate as he passes 30, or Garcia’s beneficence — are inescapable for musicians on view for dozens and even hundreds of individual spectator-hours. But even these tend to merge into the Dead’s version of the ultimate reality.

The source of this vocal anti-stance is clearly the affectless singing of bluegrass and string-band music. But it makes for surprising alliances. Yes and Cleo Laine, for instance, use the voice for emotional rather than musical effect. The Dead distinguish themselves from such showoffs by their vaunted modesty. Garcia (not to mention Mickey Hart and Keith Godchaux) is not averse to letting us enjoy his techni­cal virtuosity, but always in the service of the larger pattern; in their own way, the Dead are as anti-virtuosic as the Ramones. This in turn suggests other alliances. ­Television, say, or Eno, who in his con­siderably more abstract way also exploits rock and roll usages to build patterns that move back and forth between the reflective and the ecstatic. To me, such connections are instinctively right. They add an enlightening dimension to the Dead’s status as musty avatars of the counterculture. This can’t mean that all those déclassé longhairs were actually as avant-garde as they thought they were, can it? The thought of finding out is enough to make me take up smoking again.

This article from the Village Voice Archive was posted on March 27, 2020 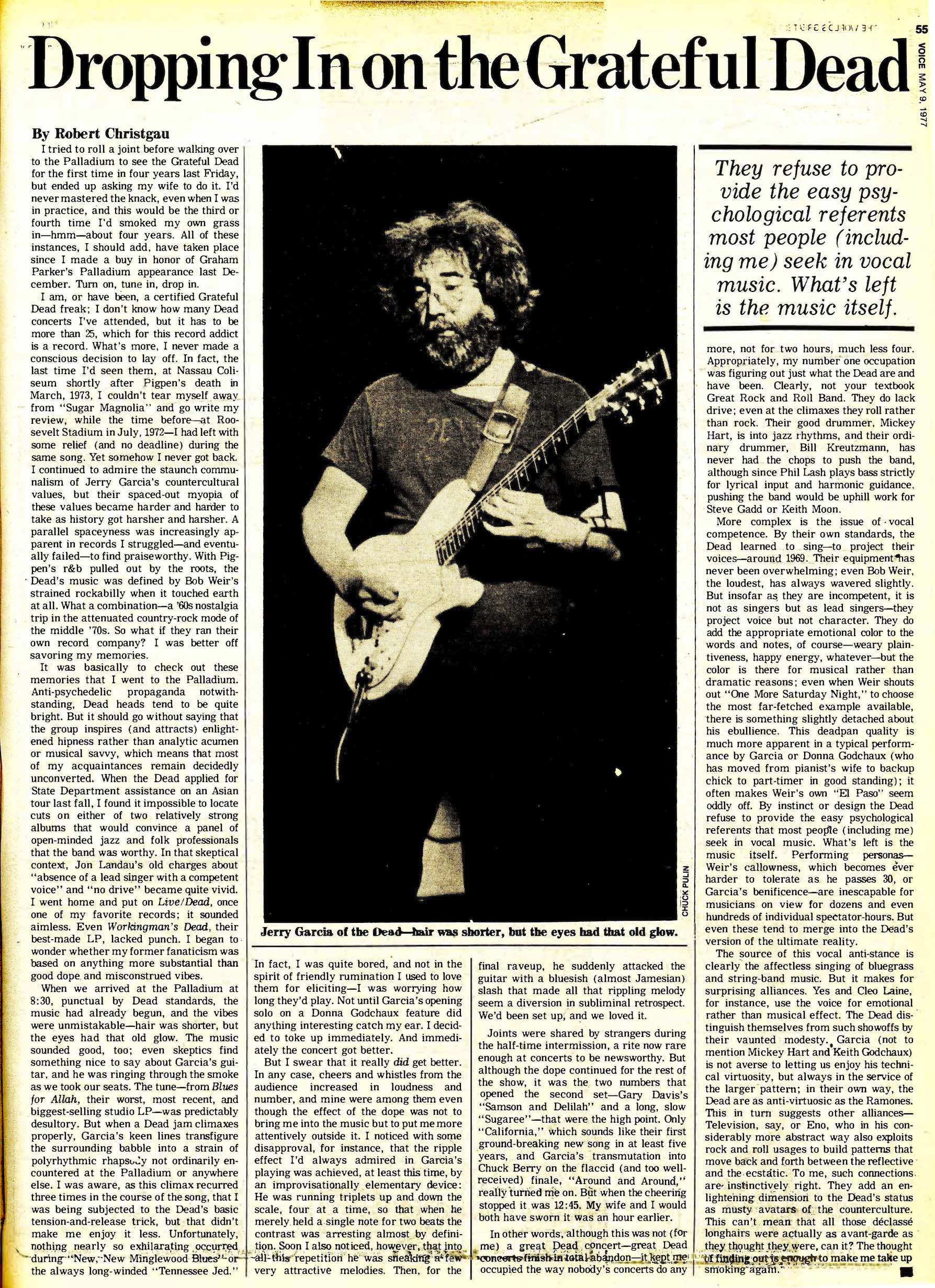