A press conference is where photographers jostle for the same shot as the one in the files and reporters ask questions about the subject’s last answer to the same question. It is climaxed by six consecutive words that utterly defy nobody’s imagination — called a lead quote.

“What is your opinion of the war in Vietnam?” was the first question read from a notebook.

“We don’t like it,” said John Lennon, author and leading re­ligious figure.

“Roobish,” said Ringo Starr, a sight act on both sides of the Atlantic.

“Would you care to elaborate?”

“We would elaborate in England but not here,” elaborated Paul McCartney. “In England people will listen a bit more to what you say. Here everything you say is picked up and turned against you. There’s more bigotry in America.” Every pencil in the room came down. “There are more people so there are more bigots.”

“Say any more,” snipped Lennon, “and you’ll be explaining all about it on the next tour.”

“Oh I just love it here,” Mc­Cartney bounced up and down.

Brian Epstein, in a lemon and lime striped blazer, pink shirt, and mauve tie, was sitting out of the lights, stroking a sideburn with a subdued smile as he exam­ined the BLACK POWER banner on a copy of the East Village Other. For openers, editor John Wilcock had thoroughly leafleted the proceedings.

“Last few feet of color, Ben­nie,” a television cameraman howled across the room.

“What no more color?” McCartney threw up his hands.

“We shooting this for the Elev­enth Hour News.” The man wheeled in for the last rays from Ringo Starr’s lavender polka dots. “Eighteen million viewers.”

“Goody,” said George Harrison who had been steadily addressing his microphone with a blue-­eyed leer. Lennon kept his back half-turned on the assemblage. “When do we do the commer­cial?”

For a limpid half hour the Beatles ritually parried the out­side world, capping trivia with irrelevance in sullen eclat. Har­rison was briefly embarrassed when someone asked him what instrument he would try next now that he had mastered the sitar. “Listen — I haven’t learned how to pay the sitar. Ravi Shankar’s been playing it for 35 years and he’s still learning.”

McCartney, who made the only conscientious attempts at civil chat, was aghast when informed that two girls had gotten onto a 22nd floor ledge at the Ameri­cana and threatened to jump un­less he came over. “Of course I’ll go see them. It’s terrible that anybody could even think about doing a thing like that.”

Lennon had moments of elaborate boredom.

Finally, a photographer sitting on the floor told Ringo Starr, “Get ready for a tough one. Your boy is almost a year old now. Can you tell us what he’d like for Christmas?”

Then the professionals made way for 75 chicklets who had won equal time in a WMCA lot­tery. The former were enjoined to the bar where Tony Barrow, Beatles’ senior press official, an­nounced the Put-On Pre-emptive: “The boys have specifically re­quested that only soft drinks be served.” The girls were taking deep breaths while a Good Guy pleaded gloomily, “This is the first time in history the Beatles have come this close to their fans. Let’s show them how grown-­up we can all be.” Before assuming civil defense crouch, one cop patted a lissome post-teen, “The Beatles ain’t showing, hon­ey, They’re just gonna roll out four dummies.”

“Bud,” she said, cocking her Kodak, “you should be so dumb.”

“Who’s shouting out there?” bellowed Paul, shaking a forefin­ger at the rising tumult. It quelled abruptly.

The Junior Press Conference opened with the burning ques­tion. “Hey, Paul, are you going to marry Jane Asher?”

“ ‘What about,’ that’s an Amer­ican expression, man,” Lennon had leaned over with the De-troit sotto voce.

Now, he grinned at his inter­locutor from Yonkers, “We prob­ably going to get married.” Everybody clapped.

“What about that guy in South America she’s supposed to be engaged to?”

“I don’t know anything about it,” Paul panned.

Everybody razzed and Ringo did a Groucho Marx.

“Hey, Paul, do you know Al Perry? He lives in the Village and he says you met him the last time you were in New York?”

After a grunt of betrayal, the girl held up a leaf. “Do you recognize this? It’s supposed to come from your front lawn.”

“Sure,” crowed Paul, “I’ve missed it for months!” In the pandemonium George did a John Lennon.

Before Barrow bounced them, they had discovered that John is 20 pages into his next book, Paul does not think he looks like Keith Allison, George is the one who coughs on “Tax Man,” and Ringo never buys his own jewelry. Then they threw their inflated plastic offerings up to the dais and trooped out of the Warwick Hotel. The girl had put the leaf back in her pocketbook and, outside, she haunched onto a police barricade of saw horses with the rest of the campers.

“Those are the kind of kids,” bet a female pedestrian, “that never help their mothers in the kitchen.” 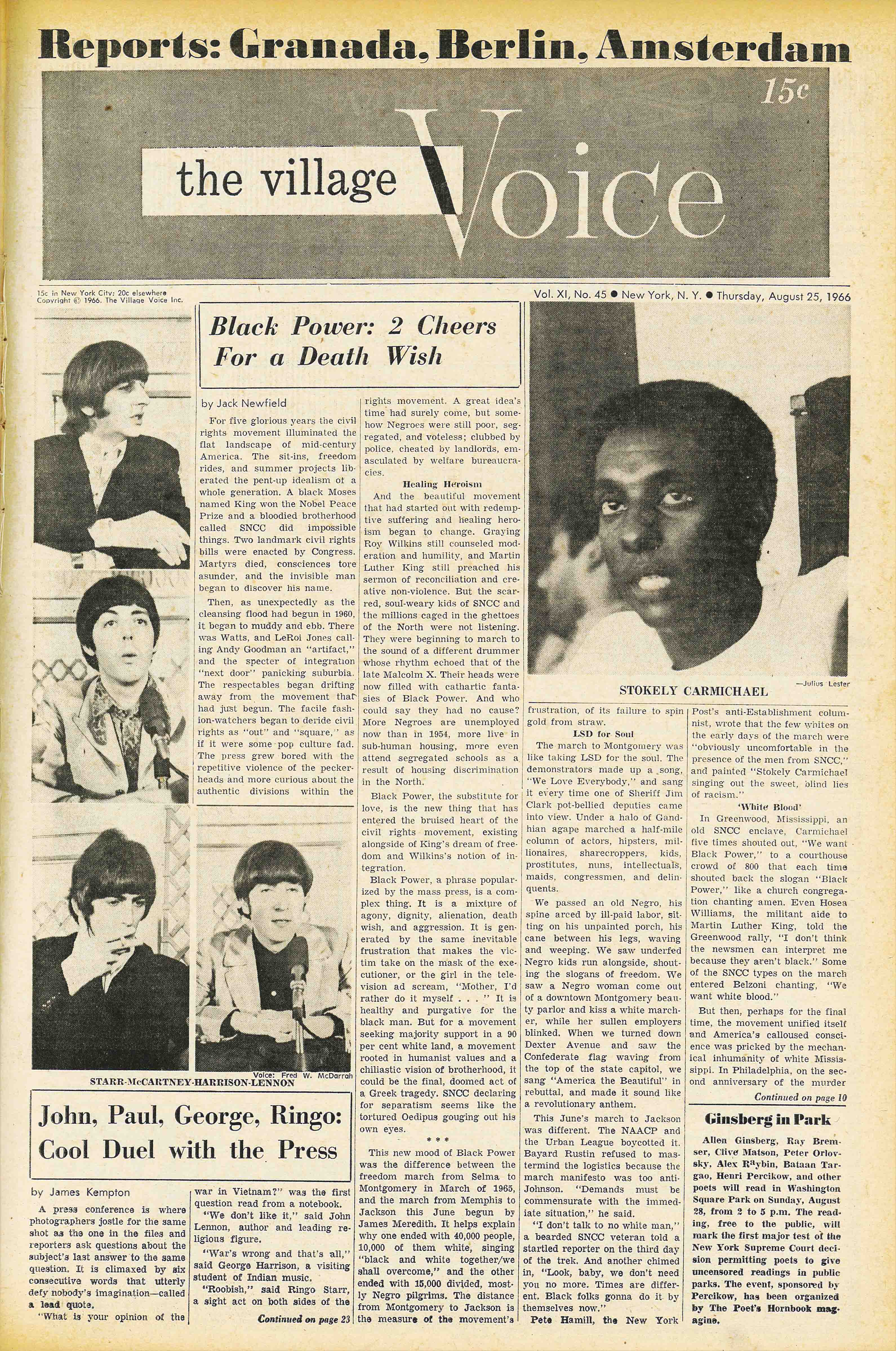 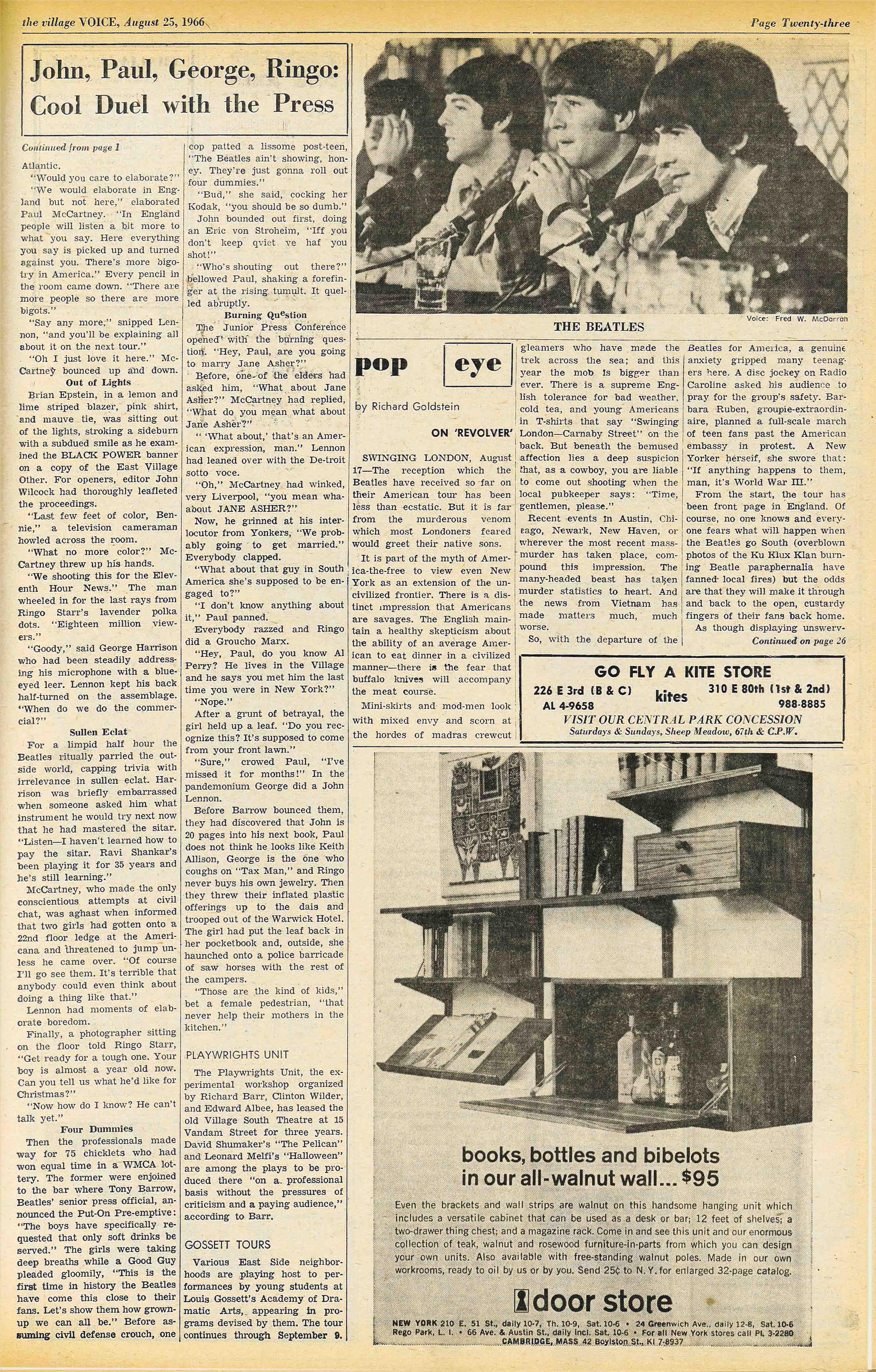