Pundits’ Prescriptions and Why They Won’t Work

The rule of thumb in the con­sensus industry is that it takes a week or so for the process of opinion formation to work its magic. But within hours after the sun set on Black Monday, pundits re­vealed their instant decoding of the market’s bleak mes­sage. They’re wrong, of course — danger­ously wrong. But let’s inspect their con­sensus before skewering it.

The villains were quickly identified: the “twin tower” deficits — trade and bud­get — and program trading. All that is needed is a good dose of austerity. We’ve been living beyond our means for years, mortgaging our children’s future. Cosmo­politan types like Flora Lewis provide the international dimension: Japan and Ger­many, two countries who’ve profited nicely from our trade deficits, should renounce their stingy ways and stimulate their economies. Germany should forget its obsessive fear of inflation (born in the Weimar era, when it took a wheelbarrow full of marks to pay for a haircut) and embrace monetary ease. And Japan should get cracking with its frequently announced (and frequently deferred) public works program. Said stimuli will keep the world afloat while we tighten our own belts.

There are differences of shading, of course. The Beltway consensus, shared by the Times editorial page and Sam Donaldson, says fiscal prudence demands spending cuts and tax increases. The ever-sharp presidential mind worries that increasing taxes might depress the econo­my — so spending cuts should do the en­tire job. All the markets require is a signal of Washington’s good intentions. Once we get our fiscal house in order, it’s years of smooth sailing ahead. After all, the economy is in fine shape; business conditions are “fundamentally sound,” as they said in Herbert Hoover’s day.

Let’s look at each of these points.

The real time bomb in all this is the high level of corporate and personal debt, a problem to which the chorus of thumb­suckers has yet to address itself. (Third World debt is a whole untouched story in itself.) Even though the cumulative feder­al debt doubled in the Reagan era, when measured against GNP, it is still propor­tionally lower than the debt accumulated during the New Deal and World War II. Private debt, however, is at unprecedent­ed levels. Instead of taking advantage of the bull market to sell wads of new stock, companies have bought back their stock, often on credit. In the 1920s, however, corporations sold tons of new stock to a gullible public — relieving the public of a good deal of its wealth, but cushioning corporate balance sheets against the shocks of the Depression. Now, corporate balance sheets have lost all their spring. A cascade of private debt defaults is the likely mechanism whereby Wall Street’s crisis will spread to Main Street — though it might take a year or two.

Immediate silver linings are few — aside from the fact that Mort Zuckerman may never get his chance to deface Columbus Circle. While it’s tempting to celebrate exuberantly the demise of yuppie culture and all the other horrendous phenomena of the Reagan/Thatcher/Koch era, capi­talism is not notable for its equitable division of pain.

Still, there are openings for the left here — practical ones, utopianism aside. The first casualty of Black Monday is the entire ideology of laissez-faire. The left should make this point in a pure and forceful way: unregulated markets tend toward crisis, not equilibrium. This isn’t an excess that needs to be controlled — it’s in the very nature of markets. Despite their populist disguise, most regulations have been devised largely to protect vest­ed interests. Over the next few years, as the crisis unfolds, we must press for regulations that amplify social control over capital.

Second, we must resist all the calls for austerity. “We” as a nation may have been living beyond our means, but for every BMW-driving yuppie, there’s a host of folks for whom the ’80s have been no party — the homeless, factory workers, farmers, blacks and other minorities, not to mention the old American middle class. The great crime of the Reagan defi­cit is not its existence, but that it’s been wasted on weapons and tax cuts for the richest. Redirecting that spending to those most in need makes good economic sense and satisfies the demands of social justice. If and when the political spec­trum shifts to the left, we can let our agenda get more ambitious. ❖ 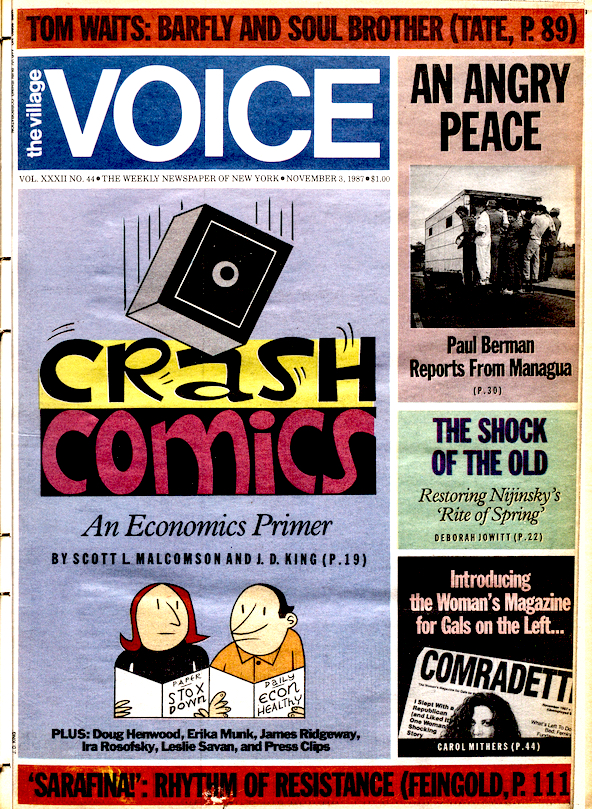 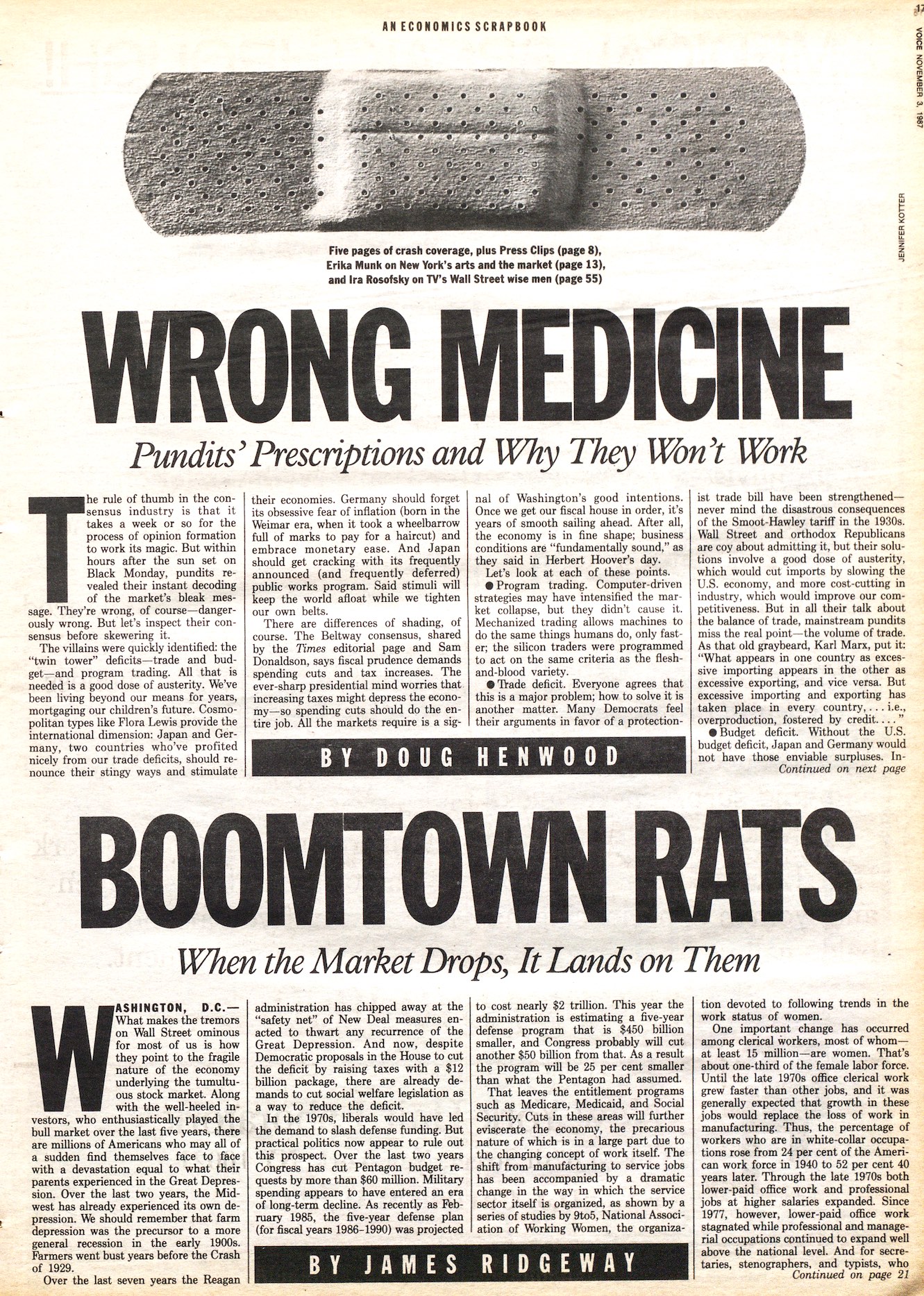 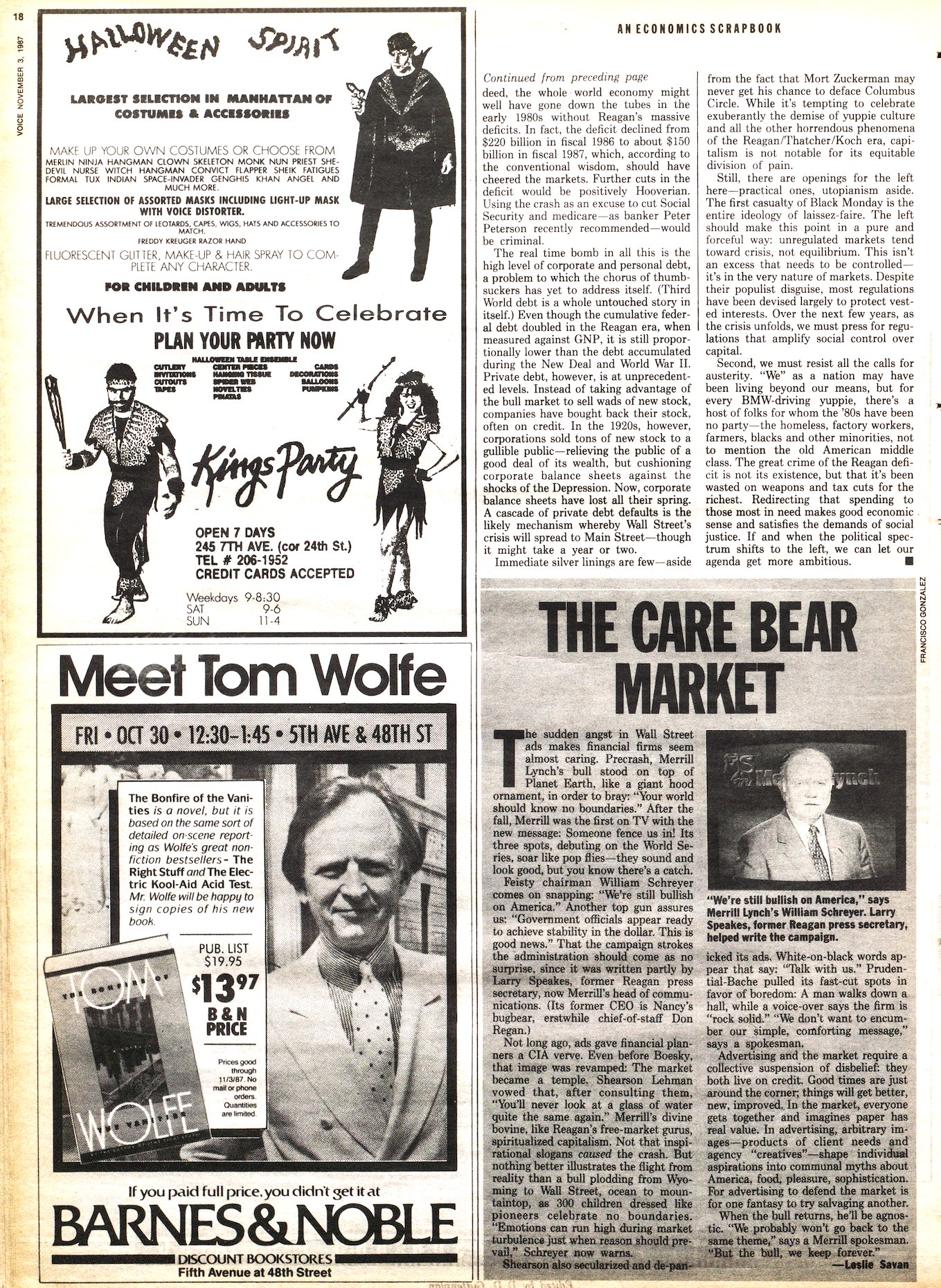