Court Street in Brooklyn. A day of dazzling October sunshine. The lunch hour. I dodge a flying column of Court Street lawyers, their presence staining the air with felonies, their gray faces crumpled into fists by the freshness of the day. I hear the name Derek Jeter and my heart thumps: has the young Yankee shortstop been indicted? Clusters of young women are pouring out of office buildings, lighting cigarettes, hurrying off to coffee shops. More names vibrate through the air: Joe Torre. Darryl. Jimmy Key. A man with a West Indian accent helps a young woman to hurry along with her cart, which is heavy with hand-wrapped packages of candies and nuts. She is wearing a Yankee button. A Pakistani in a Yankee hat peddles children’s books, and another man sells books and pamphlets about negritude. Merengue music blares from one store. Luis Miguel sings from another. Three Hasidim hurry by, gesturing excitedly, and I hear one name in the rush of talk: Bernie Williams. Rap music drowns the verbs. And I’m looking at lacquered wooden plaques bearing maps of various Caribbean islands, destined for the walls of Brooklyn, when a guy across the street bellows: “T-shirts, get ya Yankee T-shirts here, Yankee T-shirts.”

On this day in Brooklyn, the ghosts of the past are no longer present. Few wanderers in the great Court Street bazaar even know the New York Yankees were once the most loathed assembly of athletes in the city. They weren’t here. The immigrants live with their own ancient grudges and their own nostalgias; none are crippled by New York nostalgia. The immigrants and the young live in the city as it is, not as it was. At the same time, they are forging the city that will be.

“Of course, Yankees will win!” says a smiling man named Ahmed Hassan, a Palestinian taxi driver, on his way to lunch on Atlantic Avenue. “Our team! Yankees in six!”

“Five!” says Wilfredo Chacon, of Puerto Plata, in the Dominican Republic, and of Red Hook, Brooklyn. “We’re back, man.”

True. But this is more than a sports story. The return of the Yankees to the World Series parallels the astonishing changes in the city in the past few years. One thing is very clear: this is a very good time to be in New York. It’s as if the siege has ended and the survivors have come blinking into the sunlight. The murder rate has been cut in half, and there have been steep declines in almost all other crimes. At midnight now, in many neighborhoods, people are out on the streets again, walking home from movies or restaurants, free of a once invincible sense of menace. The subways are cleaner and a lot safer. And when crime goes down, optimism increases. The city can’t flourish without that most elusive emotion. Neither can baseball teams.

Nobody knows with any precision why there has been such an enormous change. Cer­tainly, Mayor Giuliani deserves some of the cred­it. He had the good sense to hire police profes­sionals who came up with a revolutionary strategy: make the cops work an eight-hour day. They were correct to make the quality of life a police responsibility. In the subways, they did su­perb work intercepting the bad guys at the point of entry; felonious kids who used to go robbing did not bother paying the fare. They made po­lice commanders responsible for failures in their precincts and boroughs. The police brass are hardly perfect; they still tolerate too many cops who are semi-psychos. But they have done a sol­id job. They have made optimism possible.

But all over the city, there is evidence of other forces at work. They have little to do with the inhabitants of City Hall. The crack fad seems to have ebbed, which means fewer murders over sneakers or control of street corners. Heroin is making a comeback, but the poor smackheads don’t spend much time shooting children with machines guns. Heroin has always been known as the cop’s best friend: it destroyed the fighting street gangs of the New York past; it is more easily centralized by the suppliers. The crack wars were an example of uncontrolled capitalism; for hoodlums and addicts, that experiment now seems over.

Much more important is the solidifying of New York’s most recent immigrant wave. I can’t prove this, but it seems obvious that the immi­grants are adding social cement to this city. They have a work ethic. They have families. The oth­er night I was talking to a Catholic priest who told me that he recently had to save some young thief from sure death at the hands of two enraged Korean shopkeepers. “He’d stolen an av­ocado off the stand,” the priest said, “and they chased him three blocks. Then they wanted to beat him to death.” The priest was amazed that nobody who has watched Koreans working 14-hour days would be surprised.

From the new Chinatown in Brooklyn to the great ethnic enclaves of Queens, the immi­grants are doing what immigrants have always done: work at the lousiest jobs until they can get better ones; show their children by example that work must be honored; envision a better future. Like the Irish, the Jews, and the Italians before them, they are subjected to stereotyping and prej­udice from those who are already here. Many of the new immigrants are being exploited: a few fall into drug addiction or crime; others give up and go home. But most of them know one big thing: this is better than what they left behind. This rude and unruly city. This New York.

In the process, they are becoming New Yorkers. And one of the crucial routes to citi­zenship remains baseball. My father passed from immigrant to citizen through Ebbets Field, not Ellis Island; he learned more about America from Dick Young than from de Toc­queville. Now we have Mexicans and Dominicans and Panamanians among us, people who have carried baseball with them in their luggage. Now they can see players from their own coun­tries in las ligas grandes. So can the others. The Koreans can cheer for Chan Ho Park when the Dodgers come to town, and the Japanese among us arrive to cheer Hideo Nomo. Their faces will be blank if you mention Jackie Robinson, or Reese or Campy or Skoonj. That was all long ago, before they were born, before they packed those suitcases and came to America. But look around a stadium on a Sunday afternoon. You know that this is their game too. Many of the rest of us have been soured by baseball. The strikes broke too many old habits, fatally interrupting a narrative that stretched all the way back to childhood. Too many players were spoiled, oafish jerks; too many owners were swine. The players and their agents moved from town to town, perpetual freelancers, never stay­ing long enough to establish local identities; be­fore we could get to know them, they were gone. Basketball grabbed us. The Knicks stayed together longer and played a swifter, more ele­gant game. For many of us, these past few years, baseball has been a corpse. And it wasn’t just a case of cynical New Yorkers. At night this sum­mer, I’d turn on ESPN’s SportsCenter and watch outfielders in a dozen different towns chasing fly balls before backdrops of empty seats. In Prospect Park, I often saw softball games among 50-year-olds. But the kids were off in the neigh­borhoods playing basketball.

Even when the Yankees were leading the division by 12 games, it was difficult to sustain interest. There were cheers, and apprehension, when Dwight Gooden pitched his no-hitter. But there was no sense of the dailiness of the game, the accretions and unfolding dramas of the long season. Until August. Until the Yankees began to lose. Until it seemed possible that they could blow it. Anyone can be a front-run­ner, and the Yankee machines of the past always seemed to be out front. But sports teams, like prizefighters, or cities, can’t ever be truly judged until you see what they do when they are hurt.

And the Yankees, like the great wounded city that houses them, got to one knee. They paused. Then they got up. And here they are, in the World Series. Here they are, for the first time in 15 years, in the great October roar of Yankee Stadium. And who could not root for them? What old fan of the Dodgers could not see that these are no longer the tormentors of the past but a whole new group, as fresh as immigrants. In the age of the sports oaf, Bernie Williams has grace. In the age of the spoiled fool, Derek Jeter plays with style and speaks with modesty. And there is David Cone, the toughest white man since Tony Zale. And there is Jimmy Key, using guile and craft and intelli­gence to make a game resemble art. And there, dark and brooding and infinitely patient, is Joe Torre. Out of the immigrant stream. Out of the old tight notion of family. Out of the culture of work. Out of Brooklyn. With a face like an old shoe. How could anybody root against him?

So I was sad when the Yankees got wasted 12–1 in the first game with the Braves. But I wasn’t ruined. After all, like Joe Torre, I’m from Brooklyn. When we were young, we learned about losing. Lessons that were usually taught by the goddamned Yankees. But a loss, a defeat, a disappointment are nothing if you have some belief in tomorrow. The young know that. The immigrants know it. They’re living their tomor­rows. And when they take their turns at bat you have to pray that the wind is blowing out. 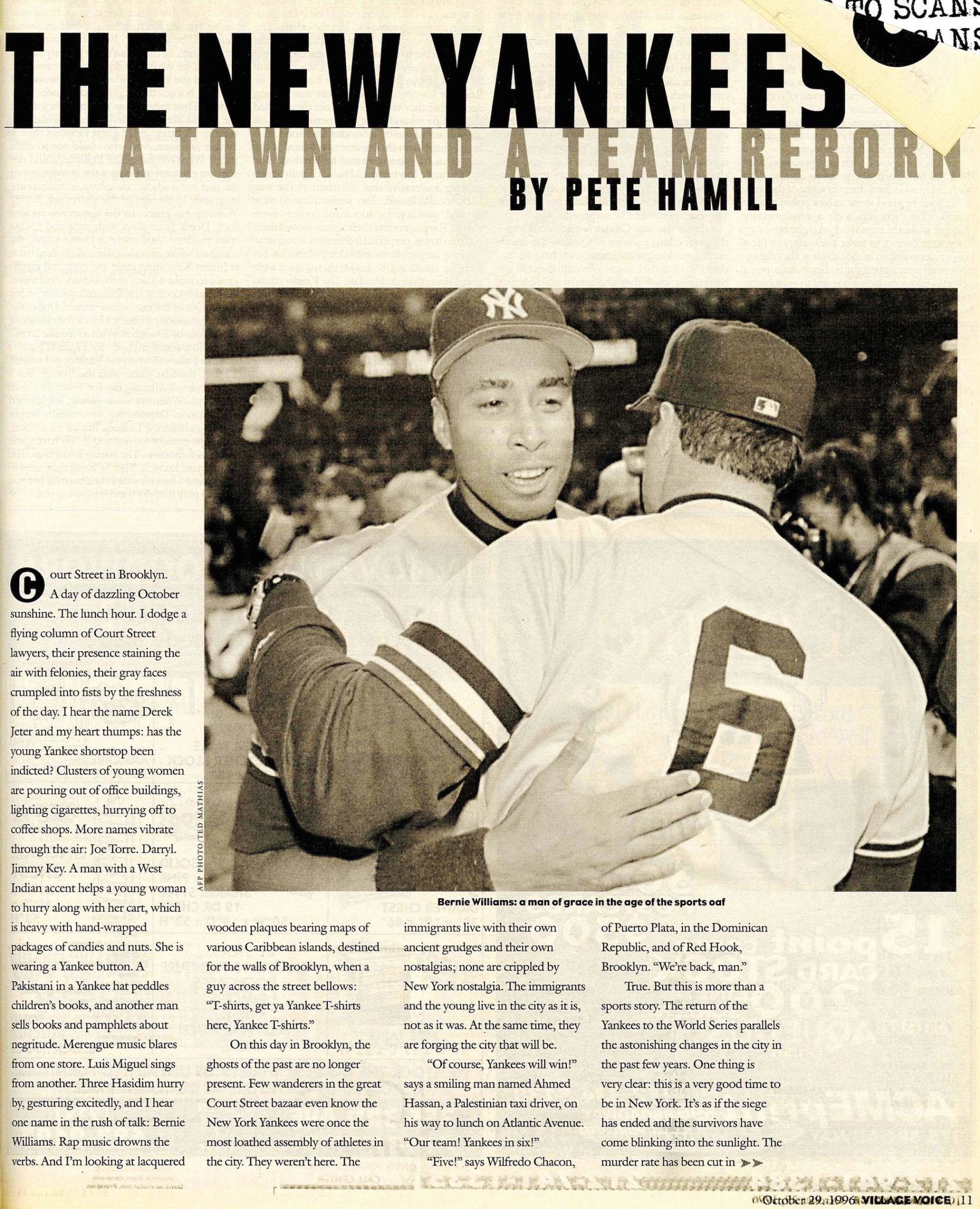 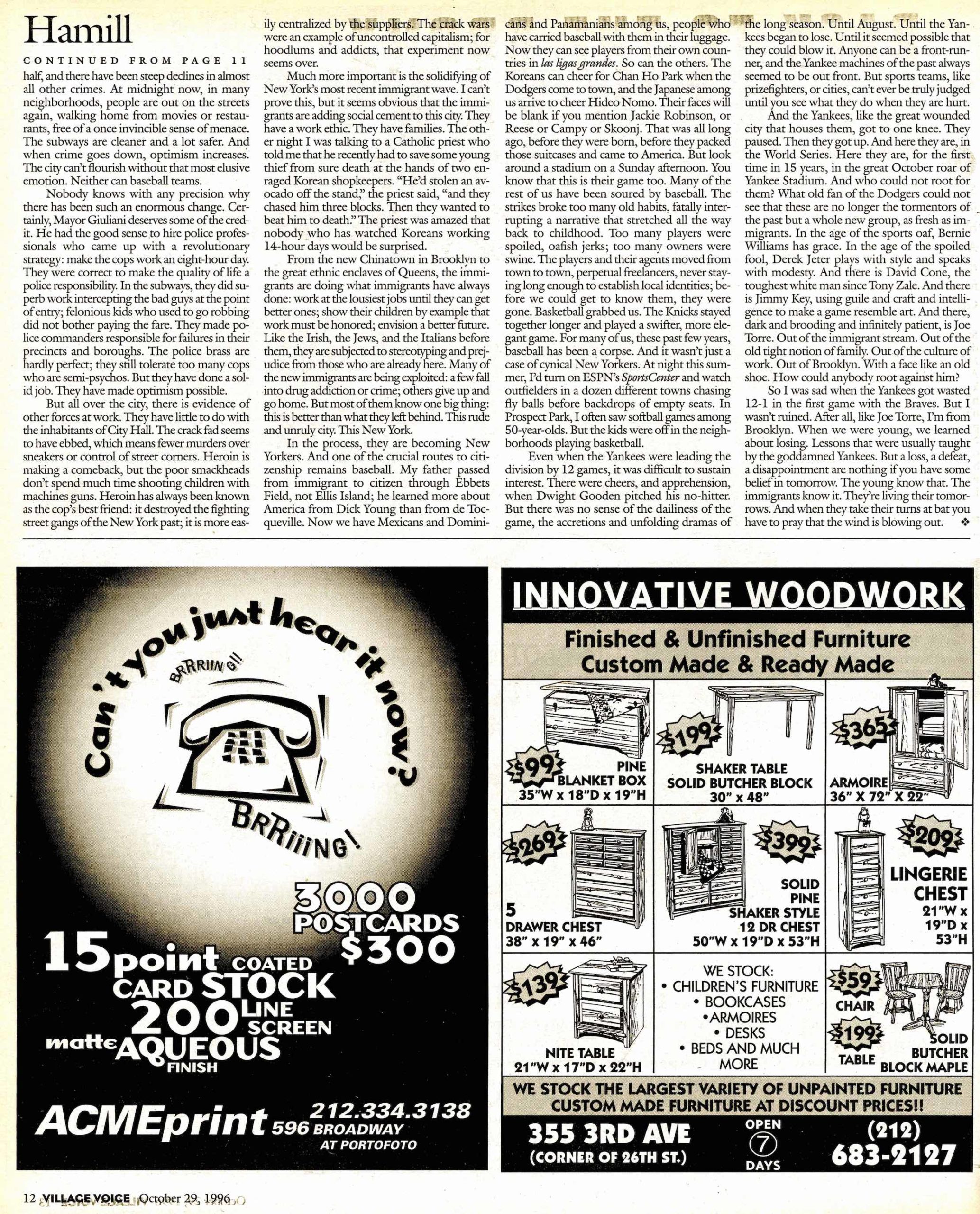