“Baldwin’s work opened up the world for me; it was also precisely because it did do that that it could, if not closely watched, over­whelm any perception I might eventually develop about it and the way we live now.”

In “Alas, Poor Richard,” his great essay on Richard Wright, James Baldwin wrote: “I was far from imagining, when I agreed to write this memoir, that it would prove to be such a painful and difficult task. What, after all, can I say about Richard…?” When every­thing remains to be said, often nothing comes. Wright had been, he wrote, “…my ally, and my witness, and alas! my father.”

Poised between pain and a grappling for speech is not an uncommon condition to find oneself in at the death of an artistic forefather. There is the sud­den, forced relinquishment of a shared and charged conversation. And now, so many of the arguments remain to be finished.

Which explains, in part, the fear I ex­perienced at Baldwin’s memorial service. For although I had never met him, the discourse Baldwin began in me — which included a deeper examination of sexual politics concerning both heterosexuals and homosexuals, men and women — lies, like a multifaceted prism in tall grass, at the heart of his work. And now, with his death, that conversation is forever interrupted.

There had been silences between us before. While attempting to discover my “self,” I had embraced and denounced his work several times, with the passion one reserves for a lover or father, and for much the same reasons. The attraction, initially, had been because Baldwin’s work opened up the world for me; it was also precisely because it did do that that it could, if not closely watched, over­whelm any perception I might eventually develop about it and the way we live now.

“…Idols are meant to be destroyed,” Baldwin wrote elsewhere in his essay on Wright. That statement was prophetic. No sooner had I read and reread the majority of his essays and novels than I began to stick holes in them, unreason his reason, resent what I took to be a cowardly fear of dealing, in print, with his “nature.”

Giovanni’s Room was the novel that garnered the most consistent level of at­tack; it seemed to be a parody of all one looked forward to in reading Baldwin: the virtuoso style, the inner life of characters that live and breathe. If he wanted to create a novel that dealt, primarily, with sexual ambivalence (i.e., barely closeted homosexuality), why did he make his protagonist white? And why place him in a land that was far, far away from every­thing Baldwin had ever known? It seemed like a complex strategy of avoid­ance on the author’s part, an unnecessar­ily obscure way to finally “deal” with who he was: black and gay and in exile.

Well, chronology plays as much of a part in a writer’s life as it does in anyone else’s, if not more so, because they con­duct their education in public. The marked difference between Giovanni’s Room, published in 1952, and most of the work since Another Country, published in 1961, has to do, I suspect, with Baldwin burying his literary father, Richard Wright. Prior to Wright’s death in 1960, Baldwin’s treatment of sexuality was more or less in accordance with his pre­decessor: the Negro as walking phallic symbol, horrific to the white male, who feared for his own masculinity at every turn. Giovanni’s Room and “The Male Prison,” his essay on Gide, should be read not for their success or failure as literature, but, rather, as records of a sublimi­nal resistance to what the father deems “appropriate.” Even so, Giovanni’s Room was a literary step up for a writer whose “real” father often said he “was the ugli­est boy he had ever seen.”

And if one took a further step back, couldn’t Baldwin’s continual discussion of his “pop-eyes” and “ugliness” be viewed as a metaphor for his early feel­ings about his sexual difference — and the disdain with which those desires were met? That was something I understood too. When a same-sex preference makes itself clear, almost inevitably it is viewed not only as a particularly nasty sin but a white or European one. Especially within the context of the church, it is seen not as a question of choice but influence. But as Baldwin has written: “That world was white but it is white no longer.”

What humbled me in the face of Bal­dwin’s work, ultimately, was that he had lived beyond that knowledge, that pain, just enough to create out of it. He had barely escaped. That was an enormous revelation for me, and has been, too, a source of guilt, for my resistance was not greater than the argument. What I had loved and hated was his speaking my mind before I knew it.

James Baldwin first became known to me through Owen Dodson, poet, play­wright, novelist, and teacher. Owen was my champion, he wrested me from a most unmanly petulance by admitting, in no uncertain terms, that he loved me. It was the first occasion I had ever heard of in which men admitted such things, let alone to each another. Owen knew that, and gave me “Alas, Poor Richard” to read. Owen had said: “Chile, all hell broke loose when Jimmy published that essay. But he had to do it. Sometimes I wonder if you’ll ever say those things about me.”

Of course I did. Part of the legacy of teachers, fathers, like Baldwin or Dod­son, is the right to free oneself from their tutelage, their love. Reading Baldwin, one knows that he wouldn’t have it any other way. Without that, the argument wouldn’t continue. Meanwhile, the prayer Baldwin set down for Richard Wright should hold us in good stead: “Well, he worked up until the end… and his work is now an irreducible part of the history of our swift and terrible time. Whoever He may be, and wherever you may be, may God be with you … and may He help me not to fail that argument which you began in me.” ❖

This article from the Village Voice Archive was posted on February 22, 2020 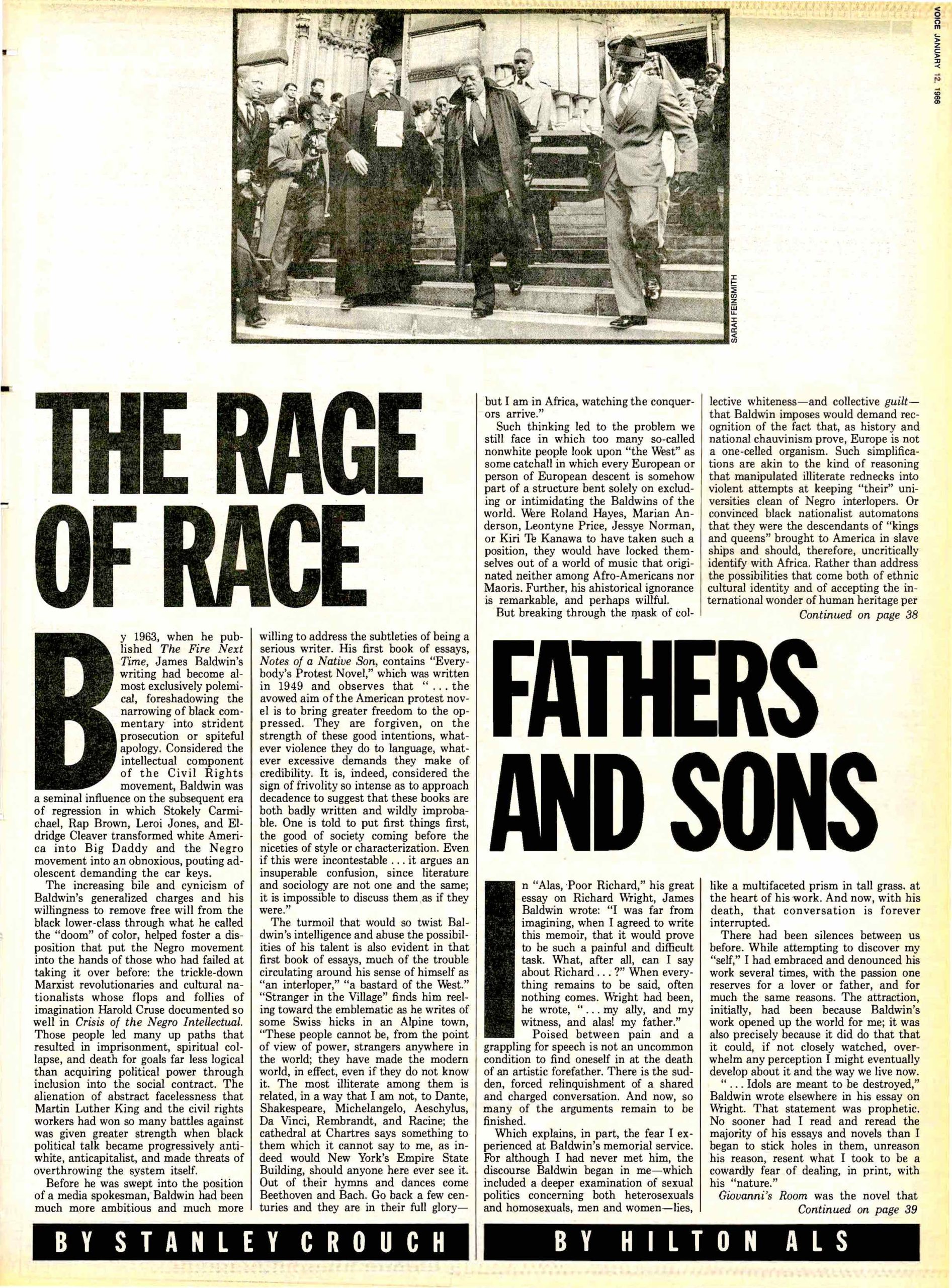