Wulf Wolodia Grajonca (1931–1991) was a 10-year-old Jewish refugee from Nazi Germany who landed in the Bronx and chose his new American name, Bill Graham, from a phone book. He grew up to be one of rock ’n’ roll’s premiere impresarios. As a show opening today at the New-York Historical Society copiously illustrates — through posters, photographs, ephemera, album covers, and audio recordings — Graham was an insightful (and at times combative) tastemaker who presented the Grateful Dead, Bob Dylan, Led Zeppelin, Tina Turner, and other megawatt acts at venues large and small.

The Fillmore Auditorium, in San Francisco, and the Fillmore East, at 105 Second Avenue near 6th Street (now an Apple Bank branch) were his most celebrated locales. Big Brother and the Holding Company, featuring Janis Joplin, inaugurated the New York outlet on March 8, 1968. 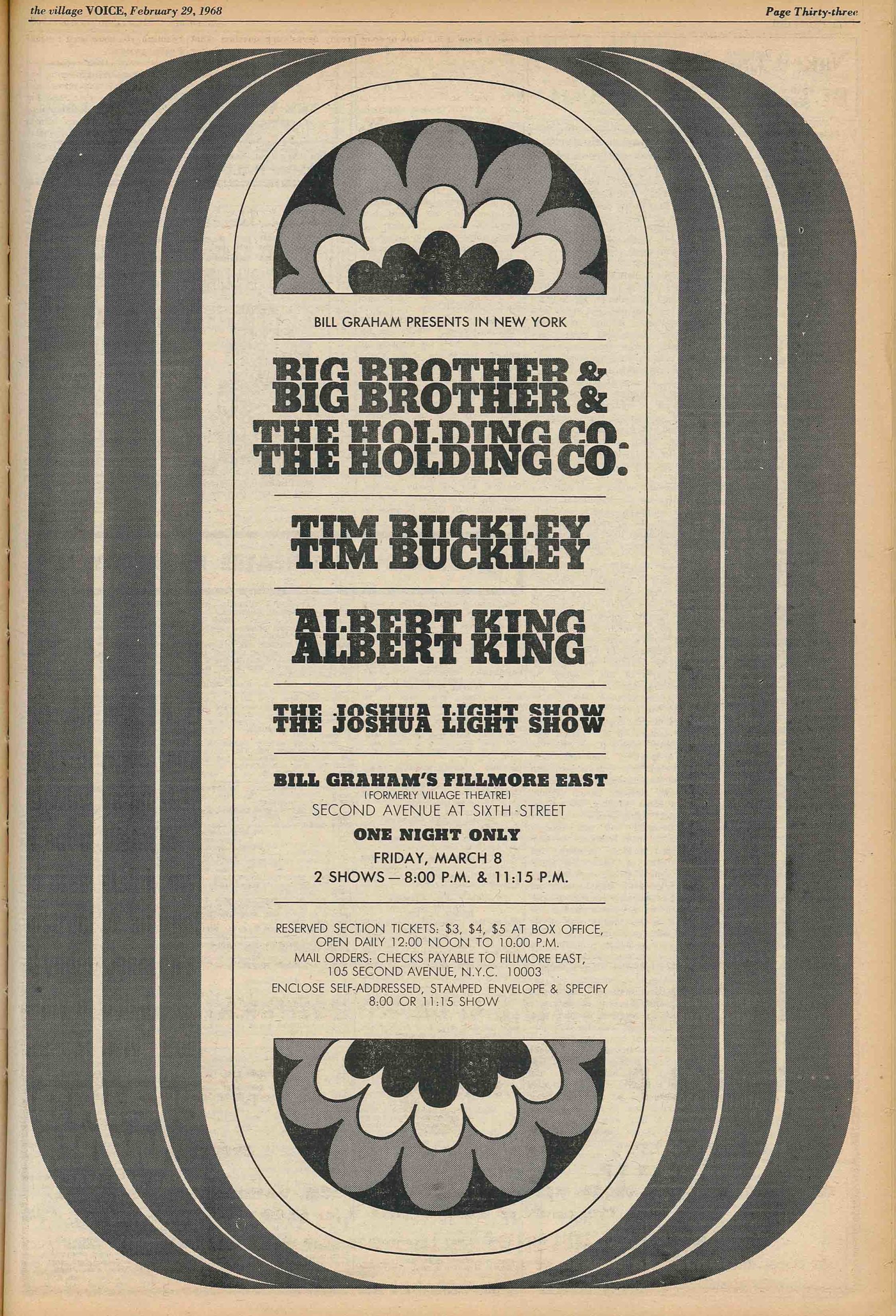 A couple of weeks later, another monster act, the Doors, made their Fillmore East debut. 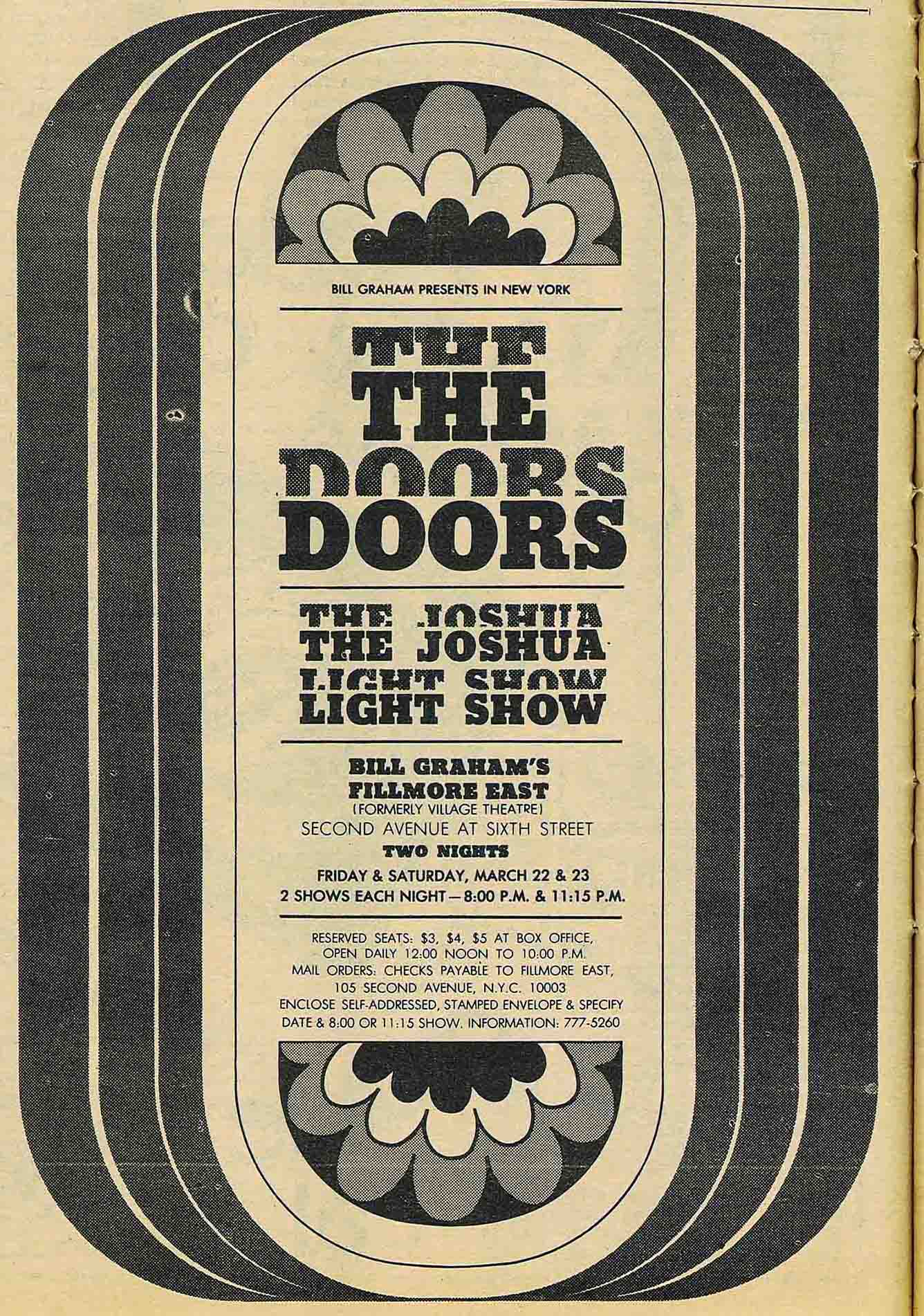 New York was a concert mecca, and the Doors ad appeared on a spread from the March 14, 1968, Voice that featured a smorgasbord of rock tastes, ranging from The Lovin’ Spoonful to Vanilla Fudge — with Hendrix, Tiny Tim, and the Chambers Brothers in between. 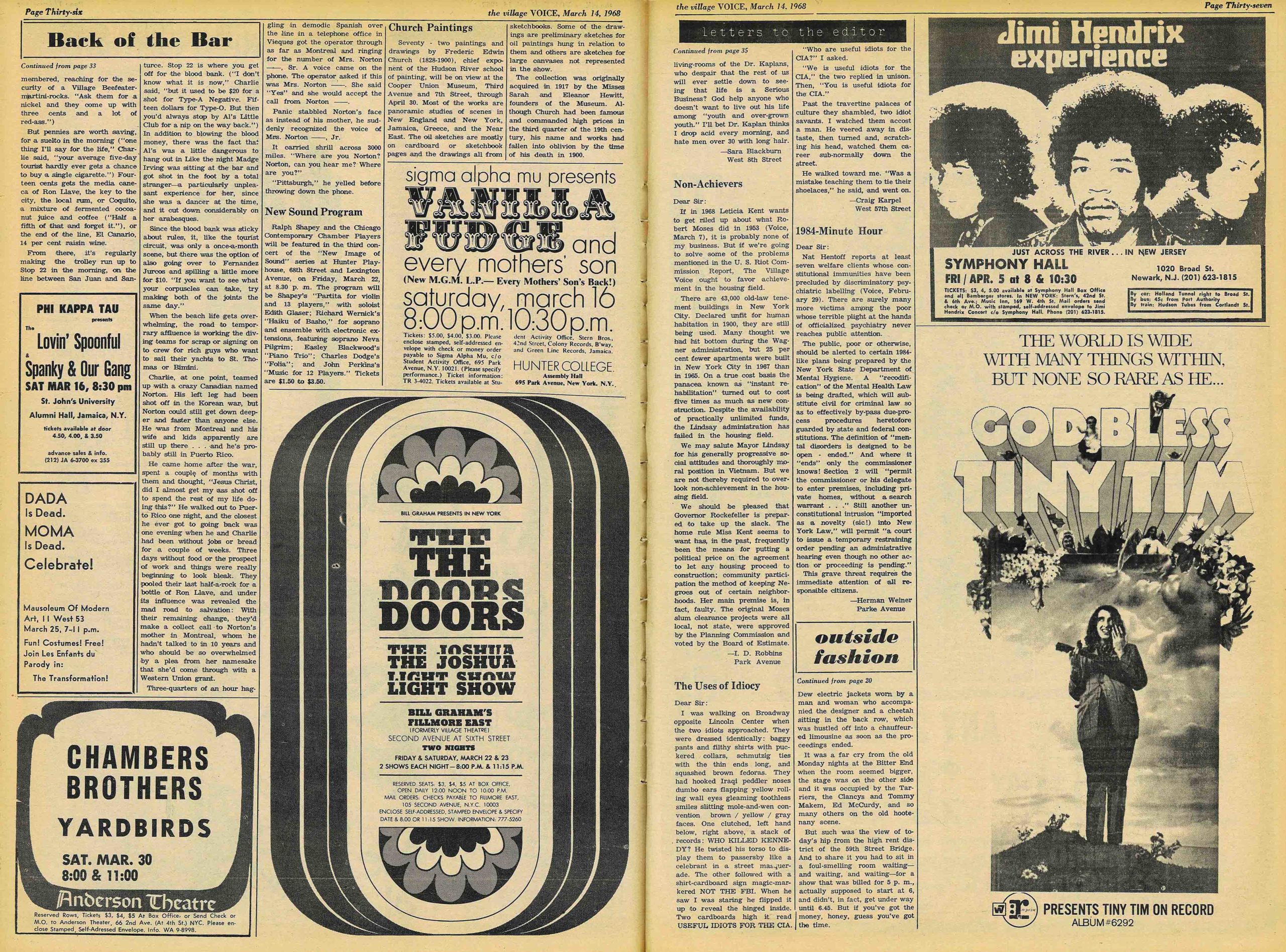 In the March 28th edition of the paper, Howard Smith noted in his Scenes column, “Bill Graham has been putting on some beautiful, well-run concerts at his Fillmore East,” describing how the promoter gave audience die-hards more than their money’s worth.

Though the Fillmore East, which seated roughly 2,700, lasted only three years (1968–1971), falling victim to the larger-capacity venues of the arena-rock age, the show at the N-YHS is chockablock with trippy posters from Graham’s ventures around the world. The ads that appeared in the Voice over the Fillmore East years were more bold than psychedelic, often featuring a heavy border and a bisected flower-burst graphic.

Occasionally, though, the venue would spring for halftone photos when announcing such acts as Ravi Shankar (playing his sitar), or the first New York appearance of “the reigning number one space group in the known world!!” 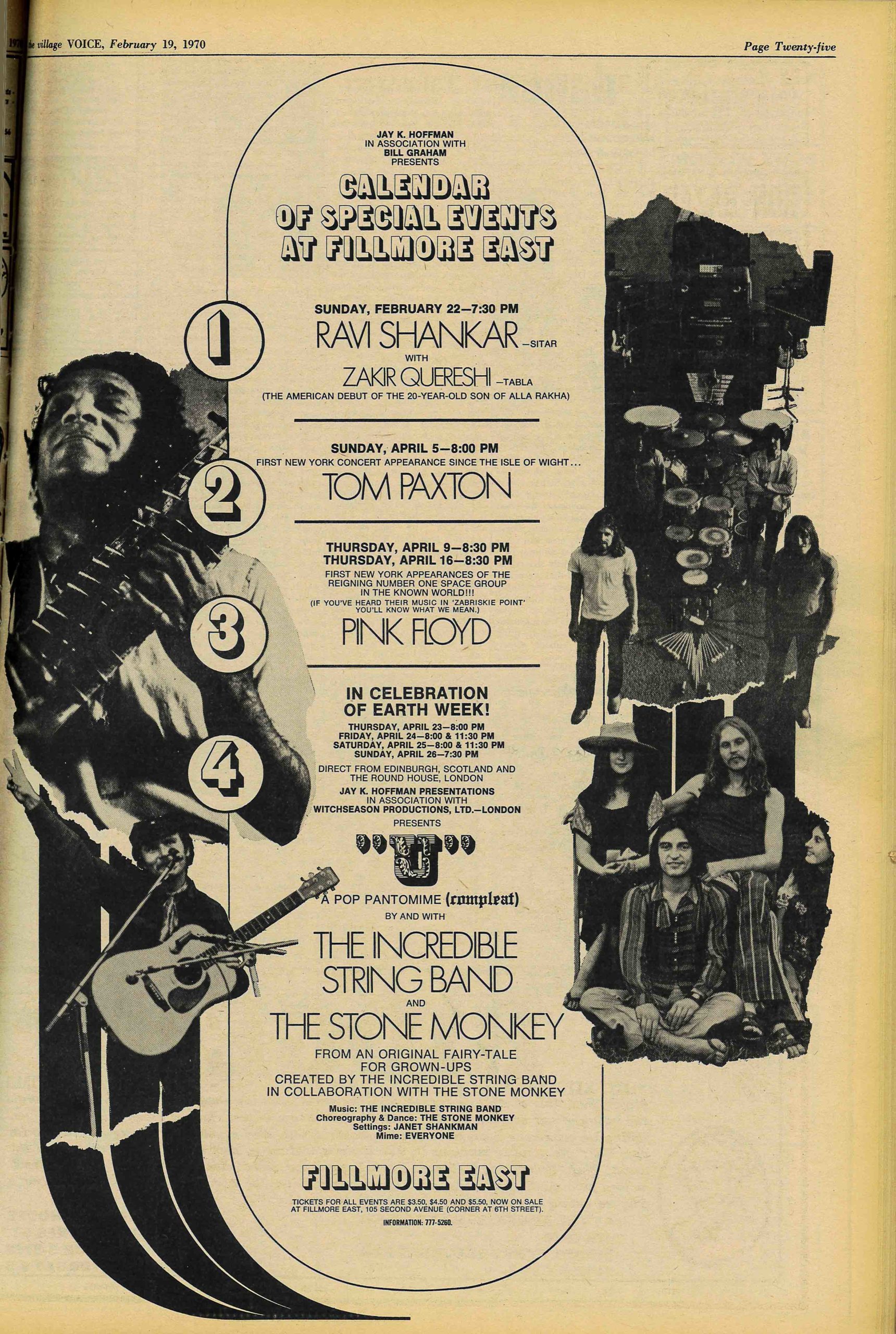 Graham could sometimes throw sharp elbows. He avoided working with the Rolling Stones on their free concert near San Francisco in late 1969, knowing that the lack of planning was a disaster waiting to happen. Indeed, the concluding show of the Stones’ wildly successful U.S. tour ended in murder and mayhem. A few weeks later, Graham told Rolling Stone magazine, “It will give me great pleasure to tell the public that Mick Jagger is not God, Jr. And it’s worth it to me. I am not trying to blast at someone that is 10,000 miles away, but you know what is a great tragedy to me? That cunt is a great entertainer.” (As numerous posters from later stadium tours by the Stones attest, Graham and Jagger eventually mended fences.)

In his politics, Graham was on the side of the angels. Among many charitable events, in 1984 he helped organize the Live Aid concert to raise money for famine relief in Africa. A year later, Graham bought a full-page ad in the San Francisco Chronicle protesting President Ronald Reagan’s decision to visit a cemetery in Bitburg, Germany, that contained graves of Nazi SS troopers.

Although printed in all caps, the ad calmly acknowledged that Reagan had valid foreign policy reasons for the visit, but forcefully pointed out, “THE NAZI SS WERE ALL VOLUNTEERS, WHO VOLUNTEERED TO MURDER AT WILL, AND WERE DIRECTLY RESPONSIBLE FOR THE ANNIHILATION OF SIX MILLION MEN, WOMEN AND CHILDREN, PRIMARILY JEWS.”

Two days after Reagan’s visit to Bitburg, Graham’s office was firebombed. Priceless posters and other memorabilia of rock history were lost forever. The N-YHS exhibition includes Graham’s newspaper ad, burned around its edges. Another featured relic is the office telephone, blackened, with some of its buttons melted by the heat.

These objects resonate in our current political moment, when President Trump characterizes Nazi sympathizers as having some “very fine people” in their ranks. Exhibition-goers can listen to songs on available headsets; the Ramones “Bonzo Goes to Bitburg” accompanies the firebombing display:

You’ve got to pick up the pieces
come on, sort your trash
You better pull yourself back together
maybe you’ve got too much cash
Better call, call the law
when are you going to turn yourself in?
Yeah — you’re a politician
don’t become one of Hitler’s children 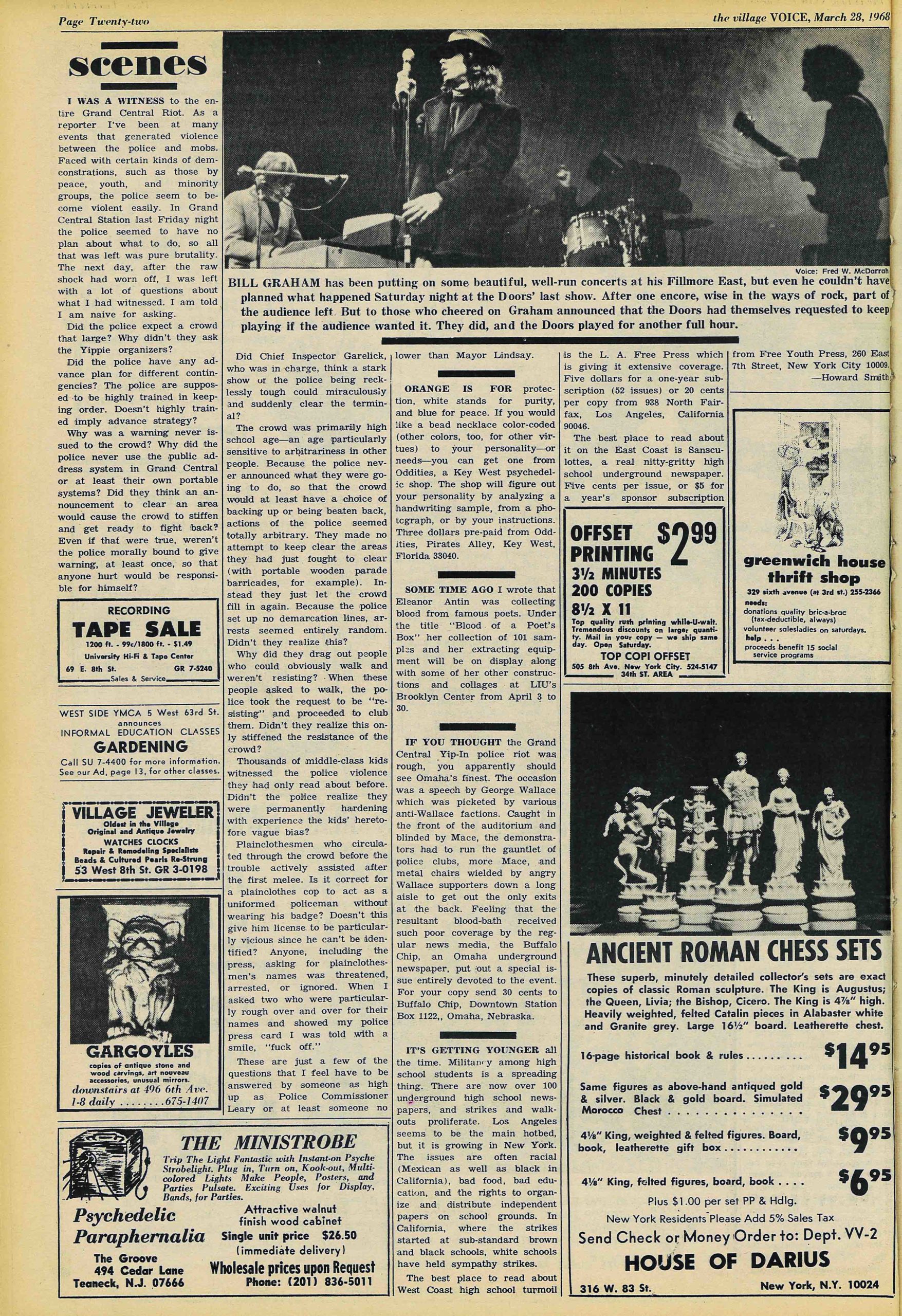