Bob Dylan has regained his courage. Blood on the Tracks has more raw power than any of his albums since Blonde on Blonde. It fuses the musical control he began to gain in John Wesley Harding and Nashville Skyline with lyrics that are so honest you begin to share his torment as soon as you hear them. In songs like “Shelter From the Storm” and “Tangled up in Blue” he is once again exploring his private rage and pain, rather than posing as the con­tented country squire of “New Morning.” Even his decision to recut the record with unknown Minnesota studio musicians to rely on the evocative power of his lonely voice, his harmonica and guitar, make you feel, in your pores, that this album comes from his craving to create, not from a willed decision that his career required a new album.

The message that comes through the blues, the ballads, the light, lithe country tunes, is a bleak one. At 34, with his marriage on the rocks, he is an isolated, lonely drifter once again: “I’m going out of my mind, with a pain that stops and starts, like a corkscrew in my heart.”

He’s still Woody Guthrie’s disciple, but his echoes of Woody’s songs evoke a deliberately desolate counterpoint to his mentor’s exuberant America (and his own past hopes). Woody saw the Grand Coulee Dam as an example of this country’s marvelous capacity to make “‘green pastures of plenty from dry desert grounds.” But for Dylan, the dam is no longer an example of benevolent engineering. It is an arid, ominous symbol. “Idiot wind, blowin’ like a circle round my skull, from the Grand Coulee Dam to the Capital.” The language and phrasing are Woody’s, but the spent pessimism of the lyric and the tone of voice sounds more like T.S. Eliot. Dylan, trapped in the prison of himself, is Tiresias in his dugs. America is his waste­land. The answer, my friend, is no longer blowing in the wind. Now the idiot wind is blowin’ in a circle round his skull.

In Blood on the Tracks, as in all Dylan’s great albums, pain is the flip side of his legendary cruelty. I remember my own anger at him when I first heard his masterpiece of scorn, “Ballad of a Thin Man.” It was released in 1965, when Dylan was still marginally political, when people who would become part of the new left were still trying to decide whether to reach out to America or withdraw from it. That insinuating, derisive refrain — “something is hap­pening and you don’t know what it is, do you, Mr. Jones” — promised to become an anthem for a spoiled generation. Dylan had permitted them to view all the America that lay beyond their tight knots of long-haired dopers as a land of Mr. Joneses, a frieze of naive, contempt­ible grotesques.

The irony is that his cruelty grew out of his own shyness, which seemed to intensify as he moved from anonymity in Hibbing to celeb­rity in New York. Before his motorcycle accident, everything he ob­served was material for a fresh tidal wave of the terrifying images that fill “Desolation Row” and “Mem­phis Blues Again.” There was al­ways a defensive, pained distance between himself anti what he saw, a quickness to judge new people and experiences without ever relaxing enough to enjoy them.

Judging from Blood on the Tracks, the years he celebrated in “Nash­ville Skyline” and “New Morning” were somewhat stultifying, a soap bubble of time filled with contrived joy. Now the bubble has burst open. Sometime — probably as his mar­riage began to shatter — his selfish­ness must have curdled into self-hatred. You can hear that in the unexpected ending of “Idiot Wind.” The song begins with a put-down that sounds as cruel as “Ballad of a Thin Man”, (“you’re an idiot, babe, it’s a wonder that you still know how to breathe”), but it suddenly closes with a forlorn paean to his woman’s “holiness” and “kind of love” and then with the terrible confession that, for the moment, he’s a sort of spiritual paraplegic: “We are idiots, babe. It’s a wonder we can even feed ourselves.”

Even if part of you dislikes the singer, you have to feel unreserved admiration for the unsparing hon­esty of his songs.

But he can never connect. He’s still too eager to be the Freewheelin’ Bob Dylan or the handsome, mysterious Jack of Hearts (the hero of a nine­-minute ballad on Blood on the Tracks) to permit any anchors in his life. Think of his songs about his five children. He writes about them once in awhile — in “Sign in the Win­dow,” for example, where he or a patriarchal persona says he wants “a bunch of kids who’ll call me Pa,” or in “Forever Young” (as mawkish and touching as “My Boy Bill” in Carousel), where he’s conventional­ly ambitious dad exhorting his young to embody a conventional array of virtues.

But the kids are always objects. He never experiences them as Robbie Robertson, say, experienced his daughter in “A La Glory” — or (to put Dylan in the class where he belongs) as Yeats experienced the prospect of fatherhood in his lovely meditation “Prayer for My Daughter.” And, incredibly, he never sings for his children. All the new songs he’s released since the birth of his first son are filled with intimate details about his love life and his search for God. But there is not a single non­sense playsong like Woody Guthrie’s “Mama, Oh Mama, Come Smell Me Now.” There is not a single lullaby.

I think that Dylan bears a very special kind of curse. He seems unable to establish warm, lasting relationships, but he’s too eager for love to make the cold decision to sacrifice his private life to his art, as Joyce or even Mailer can. Blood on the Tracks is a great album be­cause he’s writing into the head­winds of that curse, because songs like “Shelter From the Storm” and “Idiot Wind” are so plainly part of his relentless effort to find salva­tion.

The entire record is the excruciat­ing cry of a man who is tormented by his own freedom. But it is also filled with religious imagery, with hints that the wounded, weary Dylan sees “Shelter From the Storm” not as a woman’s warm home, but as the peace of God. I think that, like T.S. Eliot, Dylan longs to submit his unruly will to the ceremonies and certainties of faith — maybe Ortho­dox Judaism, maybe formal Chris­tianity. Or maybe — hopefully — some American fusion of those European forms.

For him, perhaps, the faith he is seeking is the only escape from his swirling emotions, the only alterna­tive to madness or suicide. 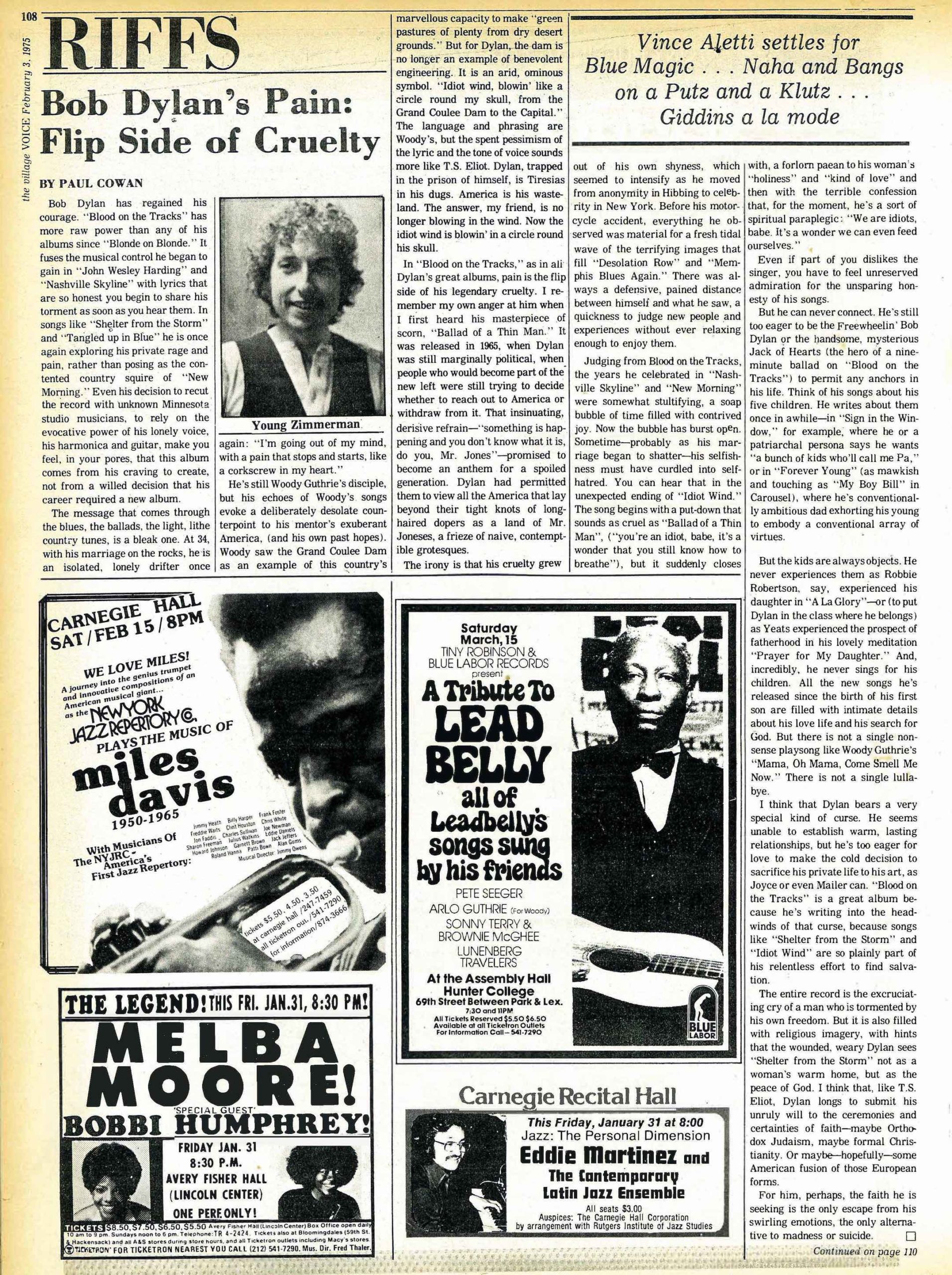