It was a strange funeral on Saturday. At Faith Temple, Church of God in Christ, the altar was decorated with policemen. In a bronze coffin El-Hajj Malik Shabazz, wrapped in the white linen of Moslem ritual, rested beneath two giant murals of Jesus Christ.

The funeral of the man known as Malcolm X was a blend of Islamic faith and Christian custom. The priest wore the brown robes and white turban of the Middle East; the widow the black veiling and clothes of western tradition. Flowers are not part of a Moslem’s funeral. Yet Betty Shabazz sent flowers to her husband. Embossed on the five-by-two-foot bank of red carnations was the Star and Crescent of Islam.

Death for a Moslem is supposed to be a private matter. There is not supposed to be any public exhibition of the body, which must not be kept from the grave beyond two sunsets. Yet they kept Malcolm’s body for a full week, and 30,000 people visited Unity Funeral Home and another 3000 came to the church trying to hold onto the part of them that had died.

For Malcolm had been the spokesman for that part of all blacks that is in constant rage at their life in the land of the rich and the home of the righteous.

Eulogies for Malcolm were heard on every corner of Harlem. But the ones delivered at the funeral were out of order. Nothing is supposed to be done during an Islamic service to create emotion or a sense of bereavement. Nothing had to be done. Even before the service began, a strapping young man sat with his hand over his eyes feigning sleep to hide his tears. An old woman wearing a white crocheted scarf over a jockey cap sat with her mittens clutched in hands wrinkled and worn with scrubbing other people’s floors. Asked what she thought of Malcolm, she said, “I love him.”

At the front of the church Ossie Davis, in a voice that kept cracking, began the first part of the service. “Malcolm was our manhood,” he said. And the people in the pews shouted, “That’s right!”

“They will tell us to write him out of history. They will ask what Harlem finds to honor. And we will smile.

“They will tell us he was a fanatic. And we will ask, ‘Did you ever talk to Brother Malcolm?’

“They will tell us that he was full of hate. And we will say, ‘Let him who is without sin cast the first stone’.”

The people in the pews shouted, “That’s right!”

Ahmed Ossman, head of the Islamic Center in Switzerland, said that he was shocked by the remarks of Carl Rowan, the Negro director of he United States Information Agency. Rowan had said that the African press was mistaken in interpret­ing the death of Malcolm X as the death of a hero. He charged Malcolm wilh preaching separa­tion and black supremacy. Ossman fervantly declared that Malcolm had abjured all racism after making his pilgrimage to Mecca. The mention of Rowan’s name set off a low rumble. Some ­people hissed.

Finally the speeches were over. The second half of the service was conducted by an Islamic priest. There were four takbeers, or prayers. When the phrase “Allahu Akbar” (“God is the Most Great”) was uttered the Moslems — perhaps 50 — placed their hands open at the side of their faces.

Close friends and Malcolm’s half-sister filed past the coffin. They struggled to maintain the dignity and restraint required by the occasion.

When Betty Shabazz, pregnant with her fifth child, stood before her husband, she bit her lip in a fight to control herself. Then she broke. Weeping, she pressed her lips against the glass shield that divided her from his body.

The crowd broke with her, and a moan went up. There was a shriek from a woman in the first row.

The coffin was carried down the left aisle. People reached out.

One woman following behind the coffin began to scream “Kill! Kill! Kill them all!” A younger woman put her hand on the other woman’s mouth and walked her out, saying “Stop, Mamma! Stop! You’re only making it worse.”

The coffin went on to a silver-blue hearse. Policemen stared down from the rooftops. The 50-car funeral procession left for Ferncliff Cemetery in Hartsdale.

But the people wouldn’t go home. They tried to get back into the church to get a prayer book. To get a flower. To get something they could hold on to. Eventually the crowd thinned A small cluster of women remained on the sidewalk in front of the church. There was one, a big woman in a black kerchief, who cried as she talked. When she saw a reporter trying to take down the conversation, she turned to her companions and said, “Stop talking. Don’t say anything. They always take words and twist them. That’s what they did with Malcolm.”

Then, turning on the reporter she said, “That man didn’t teach violence like the papers all say. He taught me about myself. He taught me I was more than a Little Black Sambo or Kinky Hair or nigger.

“They called us junkies and drunks. And I was ashamed. He opened my eyes. He made me see who was bringing all the dope to Harlem. Who was opening all the liquor stores. Black men don’t have that kind of money.”

As the woman named Doris talked, she continued to cry. And as she cried the crowd gathered. Turning to the reporter she asked, “If I slapped your face, what would your normal reaction be?”

“To hit back,” said the reporter.

“Well, that’s what Malcolm told us to do. To defend ourselves. Yet all the papers keep talking about is his violence. It make me sick.”

“Sure,” said a young college student, “they just love him now — the liberal columnists — now that he’s dead. It’s like Kennedy and business. They heaped all kinds of praise on him after he was no longer a threat to their establishment.”

Then a woman wearing a leopard print turban and stole and dancing silver earrings introduced herself as Audley Moore. “I’m 66 years old,” she said. “I was one of Marcus Garvey’s people. I’ve been work­ing in Harlem now for over 40 years. I sat at the feet of Mary Bethune and other leaders trying to learn how to help our people. I fought to get Negro history taught in schools in 1934. I wasn’t a follower of Malcolm X, I was his mother.

“He used to call me his Queen Mother. And I would say to him, ‘Now, Malcolm, honey, why do you have to rob Africa? We are African-Americans, not Afros. How come France produces Frenchmen? And Italy produces Italians? But Africa can only hatch Negroes and Afros?’

“Why, being an Afro is almost as bad as being a Negro. It almost puts us in the same class as that man Rowan. Now, he is a Negro! A real U.S. made and manufactured Negro!

Miss Moore and the people in the crowd began to talk about building a monument to Malcolm X. A Harlem young man walking by in Nigerian dress stopped, raised his stick, and shouted, “Don’t spend money on statues, spend it on guns!”

“What’s wrong with these?” said another young man, raising his fists.

“The only law that exists out there is the law of the gun,” answered the man dressed in Nigerian clothes.

“I don’t believe in turning the other cheek,” said Miss Moore. “But it’s stupid to use guns when they have the Army, the Navy, and the Marines.”

The talk about Malcolm caused Miss Monroe’s sister to suggest that gas be put in the car and everyone go to see Malcolm’s grave. Many people wanted to go. But the seven who finally wound up in the car were a physician from the West Indies, a collector of materials for the African-American Historical Association, a teenager in a plain beret, Miss Moore in her imposing leopard-skin turban, her sister, Doris, and the reporter whose presence had originally brought the crowd together.

A half-hour later the group stood beside the grave of El-Hajj Malik Shabazz. They made impromptu pledges to unity and the struggle for freedom. They each took a leaf from the grave. And made promises to meet again. 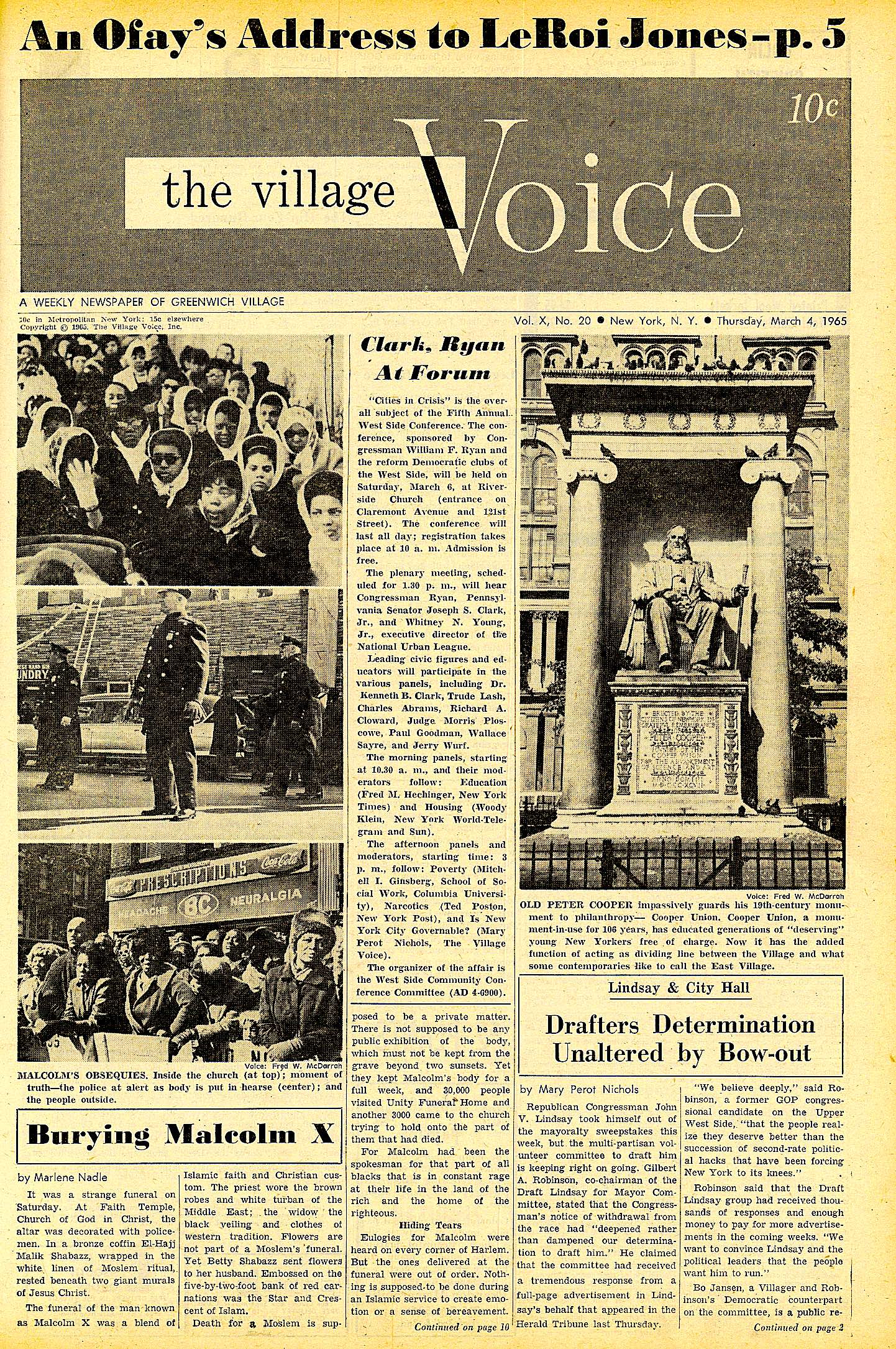 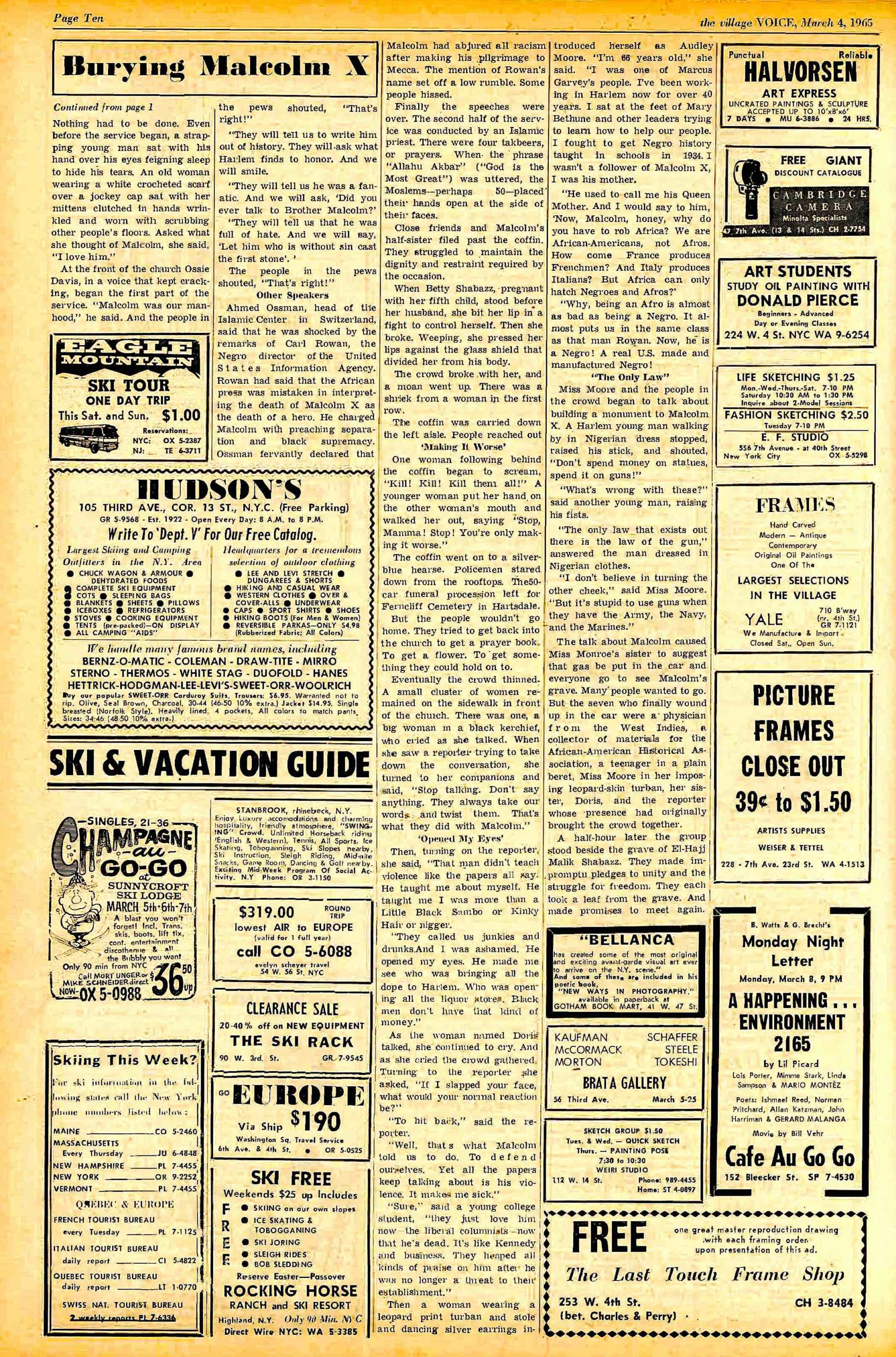 This article from the Village Voice Archive was posted on February 5, 2020