A T-SHIRT ON SALE in Hong Kong captures the colony’s apprehen­sion about China as the day of its 1997 takeover approaches. It shows Chinese atop the Great Wall asking for more tourists; below them a dragon chews on hu­man bones above the caption: “The ones that came earlier were deli­cious.”

Nervous Hong Kong developers are funneling a lot of their capital to the low-­income neighborhoods of New York City’s Lower East Side. The resulting gentrification has upset Hispanics in the area who scapegoat poor Chinese immi­grants for the doings of rich Hong Kong developers.

The money pouring in from Hong Kong — roughly $400 million so far in Manhattan alone — has been spent on real estate. As a Chinatown realtor says, “The Chinese would rather own bricks than money.”

Most of the Hong Kong capital comes from pools of cash jointly held by as many as 20 investors. In contrast, the Japanese investment in U.S. real estate­ — which is expected to reach at least $43 billion by 1990 — comes largely from ma­jor corporations, which prefer to invest in office towers and hotel properties in Mid­town and the downtown financial district. Hong Kong investors, on the other hand, have concentrated on loft buildings and garment factories in Chinatown, which is devouring contiguous communities like Little Italy — now trimmed to just two blocks — and a previously Jewish neigh­borhood in the Lower East Side. Real estate brokers in New York maintain that property values on the Lower East Side increase the closer they are to the heart of Chinatown.

“Tiananmen Square has had a deep effect on Hong Kong,” says Thomas Li of Grand Enterprise Corporation, a partner in a proposed $15 million Hong Kong­–backed condo project on Delancey Street. “People who wanted to stay after ’97 have changed their minds. Many people I know are pulling out 80 per cent of their investments.”

It’s too early to tell how much of the capital flight fueled by recent events in China has ended up in New York. But the pre-Beijing massacre investments were already intensifying pressure on China­town, where commercial rentals and housing are already scarce. Businessmen were on edge about the colony’s future as far back as the early ’80s. But the new money has already inflated prices and ensured increasing gentrification. Three years ago, the largest feasible real estate deal in Chinatown was worth around $18 million. Today, a $50 million project is under way. In 1986, vegetable stall own­ers in Chinatown paid more rent per square foot than the owners of Tiffany & Co. in midtown Manhattan.

THE DISPLACEMENT of other ethnic groups that is accompanying Chinatown’s expansion has given birth to a racially hostile environment where Hispanics vent their anger indiscriminately at all Chinese. The low-income Chinese, who have taken the brunt of gentrification-­inspired antagonism quietly, are blamed for the intrusion of their rich counter­parts into the neighborhood.

“Other ethnic groups in the area are confusing two different groups: the immi­grant workers and the Hong Kong inves­tors,” says Mini Liu of the Committee Against Anti-Asian Violence. “There’s a sense among non-Asians in the commu­nity that all Asians own land and are taking over.”

Last November at Seward Park High School, a racially mixed school on Grand Street, several Chinese students were as­saulted by a group of Hispanic class­mates. “There were three, four, or five incidents in a span of a couple of weeks, ” says Jules Levine, the school’s principal. “Although there were several Hispanic boys in the area when the attacks hap­pened, only one was identified as the ag­gressive one. He was brought to the po­lice, and the problem was solved.”

While doing its desperate best to shield the incident from public and press scruti­ny, Seward Park has been working with the Seventh Precinct, members of the Committee Against Anti-Asian Violence, church leaders, and community organiza­tions to remedy the damage.

Members of the ethnic education com­mittee planned to start a racism-aware­ness program by this fall. But, according to Mini Liu, “The school’s approach has been cosmetic. The committee had to be pushed hard to talk about racism aware­ness. They’re more interested in teaching cultural diversity — different types of food, dance, that kind of thing. They haven’t included a racism-awareness pro­gram in the curriculum.”

Several committee members stress that the Lower East Side, known for its Jew­ish, Hispanic, and — more recently — Chi­nese immigrant population, has had a history of racially motivated violence.

“Incidents like Hispanic kids chasing around young Chinese immigrants are cy­clical,” says Victor Papa, an activist priest who heads the Lower East Side Catholic Area Conference. “Seventy years ago Irish kids chased Italian kids on the very same streets. It’s part of the process of immigrant assimilation.” Papa nevertheless insists that “the Lower East Side is a model neighborhood for the whole nation of how many ethnic groups can exist together in relative harmony.”

“There are underlying tensions in the Lower East Side that surface when com­petition for housing and jobs gets stiff,” says Mini Liu. “When there’s a sense that one group is getting more help than other groups, that’s when the tension comes out. People tend to lash out at the most accessible people — in this case poor Chinese — instead of at City Hall or the Department of Housing Preservation and Development. It’s a systemic problem, not an attitudinal one.”

HALF A WORLD AWAY, the Hong Kong investors who have ignited this ethnic tension are spurred on by pending negoti­ations on provisions of the Basic Law — ­the colony’s post-1997 Constitution. The 59-member Basic Law Drafting Commit­tee, composed of Chinese officials and Hong Kongers appointed by the National People’s Congress, is now working on a third draft. The provisions currently per­mit martial law and the presence of the People’s Liberation Army in Hong Kong. China’s vow to keep its “socialist system and socialist policies” within its own bor­ders while giving Hong Kong “a high degree of autonomy” for 50 years follow­ing the takeover seems dubious. China reserves the power to interpret and amend the Basic Law— even after negoti­ations have been finalized.

Two in every five of Hong Kong’s 5.7 million residents migrated from Commu­nist China. Hong Kongers’ distaste for communism is manifested in last year’s emigration figures: an estimated 45,000 Hong Kongers left the colony, more than 11,000 of them coming to the United States. For Hong Kong developers, the U.S. is a political safe haven for cash reserves. Last November, in a little-publicized ef­fort, then deputy mayor Alair Townsend and powerful members of the Chinatown business community flew to the colony with the Hong Kong Development Trade Council to promote investment in the New York real estate market. Ken W. Chin, a real estate lawyer in Chinatown and a respected member of the communi­ty, was one of the delegates.

“We’ve had a good response,” Chin says. “There’s a $50-million project on the way for a large hotel, with office and retail space and banquet facilities. We’re aiming to complete it by 1991 or 1992.” His vision for Chinatown: “It will be part of mainstream business. Five years from now, walking down Canal Street will seem like walking down Lexington Avenue.”

The Mandarin Plaza, a $37 million condo project at Broadway and White Street, is another Hong Kong–financed development. The 25-story condomini­um, which is due for completion next spring, is a joint development of Thomas Lee, a general partner in the New York–­based Target Development Corporation, and William To, a Hong Kong businessman.

According to John Eng, a real estate appraiser based in Queens, Hong Kong investors have been buying up Lower East Side loft buildings on East Broad­way, Broadway, Market Street, and Divi­sion Street. He estimates that the proper­ties are worth $70 to $74 per square foot before renovations. After the buildings’ conversions — usually into condos — they sell for $250 to $275 per square foot. In Chinatown, Eng says, Hong Kong inves­tors buy loft buildings and garment fac­tory spaces for an average of $1 million and then convert them into office build­ings. Before conversion, Chinatown prop­erties sell for $70 to $100 per square foot. After conversion, these properties are worth $300 to $325 per square foot. In 1988, Eng says, 40 to 50 such properties were sold to Hong Kong businessmen. From his figures, overseas investment ac­counts for 50 per cent of New York prop­erty sales; 35 per cent is solely from Hong Kong.

With Hong Kong property values al­most equaling those of Tokyo — the high­est in the world — market prices in the U.S. seem dirt cheap.

Though San Francisco has absorbed the bulk of Hong Kong investment in the U.S. ($500 million), the city’s Proposition M, which limits office construction to 450,000 square feet a year, is fast chang­ing that. According to Landy Eng (no relation) of the California State World Trade Commission, investors are beginning to feel unwelcome because of the difficulty in obtaining building and modi­fication permits. In comparison, New York is becoming more attractive.

Even more fundamental for the Hong Kong businessman than the rate of re­turn on investment and the economic at­mosphere of a city is the continuance of cultural and familial ties. New York’s Chinatown has the largest number of Hong Kong immigrants in the U.S., fol­lowed by San Francisco. Many real estate brokers and developers are happily an­ticipating more Hong Kong dollars in New York. ■ 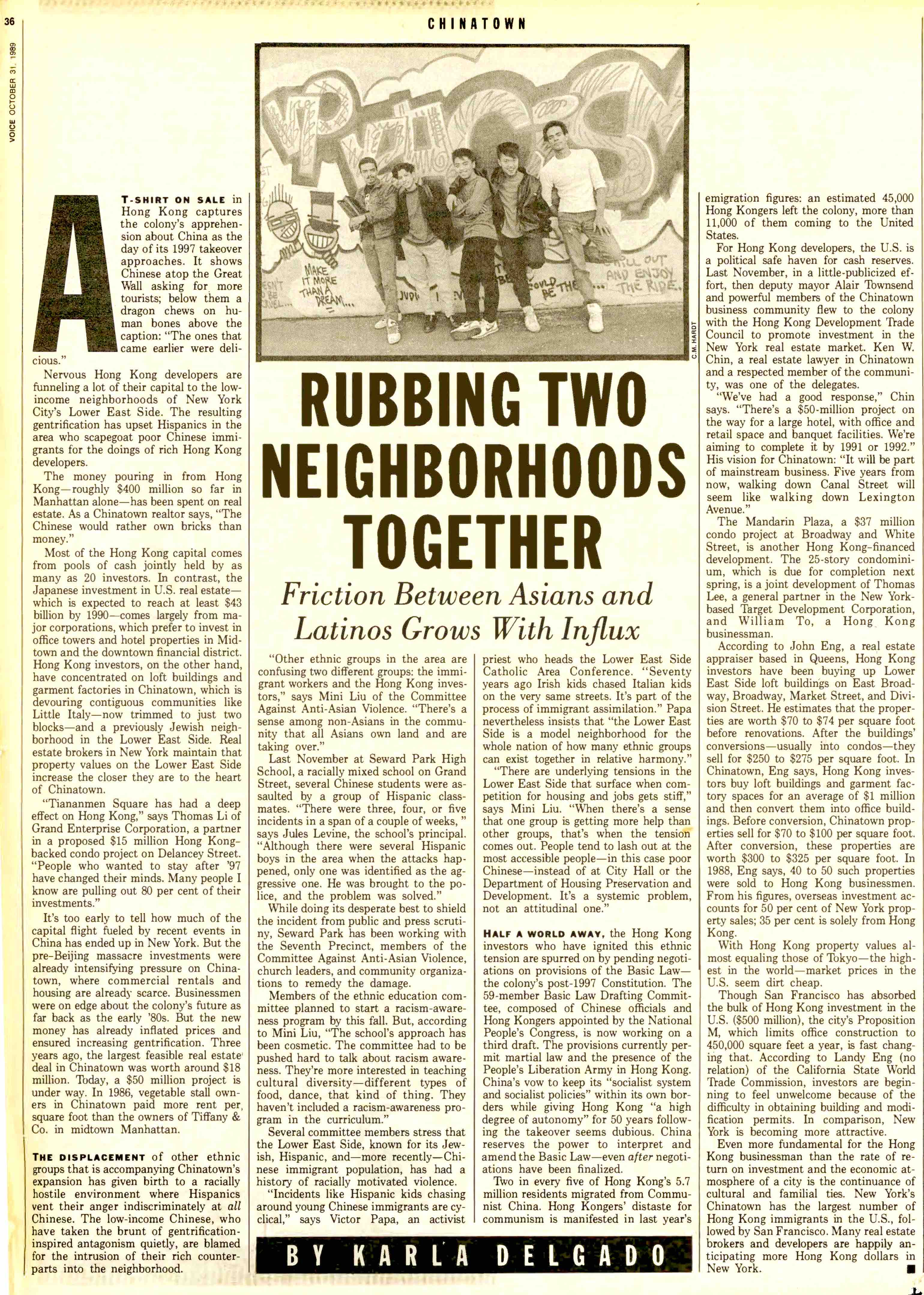