CHICAGO — Hit squarely between the shoulder blades, Reverend Martin Luther King closed his eyes and fell to one knee. He waited for the impact of the bullet. But King had been struck by a rock. He brushed off the back of his neck, told reporters he was fine, and signaled his followers on.

Twelve hundred policemen tried to prevent the march from becoming a bloodbath. The demonstrators inched their way through a hail of bricks, bottles, firecrackers, and spit. Seven thousand white residents of the area screamed abuse from the sidewalks but police formed two tight blue lines around the demonstra­tors and kept the murder verbal.

Chicago is a poor city in which to prove the pragmatic validity of non-violence. This year’s quota of race-warfare was far more vicious here than anywhere in the nation. The city’s Roman Catholics are scattered in tight ethnic ghettos; they are neither rich enough to tolerate newcomers, nor organized enough to meet the civil rights revolution with anything more destructive than bricks and cherry bombs.

The black power schism has created a profound enmity among the lower echelons of Chicago’s Negro leadership. One militant leader, who wore a Black Panther insignia as he spoke, called the SCLC march “King’s last stand.” He was a bit unkind. But many accept his pre­mise — that King’s 35-point pro­gram to “make Chicago an open city” is, in part, an effort to wrest control from the militants, of the place they now hold in the hearts and headlines of America.

Chicago’s newspapers are filled with hair-raising stories about vast Negro gangs on the South Side. Tale of the Mighty Blackstone Rangers which the Chicago Daily News called “the biggest, toughest, and best disciplined gang Chicago has produced in a decade,” are filling the copy gap between the last mass murder and the next tax hike.

All these factors make this town one hell of a place to stage a comeback. But that is what SCLC’s ambitious program amounts to. It calls for more public housing construction in racially mixed areas, the estab­lishment of a bargaining union for welfare recipients, and a civilian review board. It is too early to tell whether the program or the marches will succeed. But Martin Luther King and his fol­lowers proved one thing last Friday: they showed Chicago and the nation that the Southerner is everyman.

King appeared first for the TV cameras. He stood on the steps of the Friendship Missionary Baptist Church, on West 71st St., while across the street parish­ioners distributed water ices from wooden drums. Demonstra­tors piled into cars and headed west of 71st, past the wooden fire escapes and backyard alleys which spell slum in Chicago. Suddenly, across a thoroughfare call­ed Normal Boulevard, everything became hostile and white. Clusters of onlookers booed from the sidewalks at the passing motorcade. Neighborhood kids on bicy­cles rode alongside, pointing and spitting.

The cars deposited demonstra­tors and reporters in Marquette Park. After the previous Sun­day’s march, gangs of whites roamed through this area setting fire to demonstrators, cars. This time, cars and drivers returned to the Negro quarter, leaving hundreds of tense marchers camped along the grassy slopes, waiting for things to start.

They didn’t wait long. Gangs of white youths tossed stones and sticks from across a narrow river. A brawl broke out in the parking area. And passing cars honked in protest. The police arrived in chartered city buses, and quickly cleared the area. Blue shock helmets bobbed a­mong the weeping willows and along the dirt roads over which King would walk. There had been rumors of land mines.

“I hope King gets it,” said a neighborhood boy named John, waving a Confederate flag in the direction of the marchers. “We was chased twice and we ain’t gonna move again,” he explained. A friend held a sign which said “Wallace for President.” “I’ll go to school with ’em and I’ll work with ’em,” he said, “but I won’t live with ’em. I seen what they did to their neighborhoods and I don’t want ’em doing it here.”

Gage Park is a Polish-Lithuanian ghetto. Many of its residents moved there from other neighborhoods where Catholic churches have since become Baptist or Pentecostal. They stand on their porches awaiting the Nigger invasion. The anger of genuine frustration is on their faces. They hold their children and scream “White power,” and “Get that priest out of there; he’s no priest.” But over the insults and the clenched fists, they tell you: “We won’t move again.”

The line moved slowly through the park. Two brown banners at the head proclaimed the movement’s insignia: a V encased in a circle. Veteran demonstrators began to sing but the marshals ordered quiet. Over the silence were the sounds of shuffling feet, the crack of nightsticks against policemen’s thighs, and the distant roar of autohorns.

On California Avenue, the crowd marched past rows of neat porches and shrubbery. “Keep your slums; we don’t want ’em,” one mother screamed. “Kill coon King,” chanted a group of old men. And two teenagers who said they were “some of the boys from Saint Rita’s” warned: “It’s gettin’ dark soon; then there’ll sure be some action.”

On California and West 63rd, a phalanx of teenagers tried to charge King’s bodyguards. Po­lice pinioned two youths to the ground and handcuffed them, while enraged neighbors shrieked: “Brutality,” and “let ’em go… let ’em alone.” King in a grey suit, blue shirt, and no tie, was almost hidden from sight by his followers. Whenever the group stopped, they covered his head with picket signs.

All along West 63rd the side­walks were filled with shouting, spitting whites. Firecrackers ex­ploded freely among the march­ers. Those hit, limped. A priest picked up a brick which had hit him in the shoulder and put it in his pocket. A knife, aimed at King, hit a young student in­stead; police carried him away as the crowd roared its approv­al. When the entire march halted before the Mark Realty Com­pany, which has allegedly re­fused to serve Negro applicants, the street exploded with boos and cries of “We want Rockwell.” A silent prayer was pockmarked by breaking bottles and exploding cherry bombs which the crowd lobbed into the kneeling demon­strators.

Police Chief Orlando Wilson’s finest stood careful guard over the parade. The cops were sen­sitive to charges of negligence which Negro leaders lodged aft­er last Sunday’s brickbath. Aft­er the march was over Negroes shouted approval as one marshal asked for “three cheers for the blue.” It was an unexpected trib­ute; the cops were startled.

White onlookers were not so complimentary. Along Kedzie Avenue, police swung freely at cursing teenagers. When the marchers returned to Marquette Park to disperse, they were fol­lowed by a mob estimated at 5,000 whites. Hecklers lined a slope, cheering whenever a fire­cracker exploded like fans at a football game. Clouds of dust covered the area as police chased charging youths through the grass. One man kicked a policeman in the leg and re­ceived a sharp blow across the face. Blood oozed from his nostrils and forehead; he began to cry. Three policemen pinned his hands and carried him away.

A youth was tossed into a pad­dy wagon, his shirt splashed with blood. An injured policeman writhed on the ground while four more cops felled his assailant, and applied handcuffs. Teen­agers began to scale a high fence to reach the marchers, but po­lice knocked them down with flailing billy clubs.

Amid the screaming mob, 800 marchers huddled in the road­way waiting to be piled into po­lice busses. Lewis Cole, a young New Yorker who is in Chicago for the summer to work with SCLC, blamed the Roman Cath­olic educational system for the riot. “These folks actually be­lieve Negroes have tails,” he said. “I’ve never seen people so sick with hatred. This puts Mis­sissippi and Alabama down.”

Cole, who has traveled through the South, is a firm believer in non-violence. He said: “You don’t beat a crazy man; you take him to the psychiatrist.” Suddenly a cherry bomb exploded at Cole’s feet. He grabbed his knee and rolled over in pain, as a small crowd of women squealed with delight.

Busload after busload of marchers pulled out of the area. Police swinging nightsticks charged a mob of teenagers blocking the roadway, but they left the thousands on the slope alone. “If that crowd breaks through,” one cop said, “it’s gonna be the end.”

On one bus, the marshal or­dered all windows closed. The vehicle pulled away amid a hail of spit. No longer protected by the police, it sped through the hostile white streets. Stones and bottles flew from the sidewalks. The marshal shouted, “Every­one duck.” A window shattered and one marcher picked up a huge yellow brick that had hit him in the head. His scalp bled from three places. A second win­dow cracked and glass spilled freely over the rear section.

Once across Normal Boulevard the marshal shouted: “We made it.” The bus rang with cheers. Freedom songs began spontaneously. From the porches, lad­ies smiled. From small shops, merchants and customers waved. From the sidewalks, young toughs clapped and sang along. Suddenly there was no more black panther stalking, and no one was screaming “burn baby burn” and there were no Molo­tov cocktails hidden in the al­leys. It was like the good old days, before non-violence be­came passe.

Martin Luther King, Nobel Prize winner, pacifist, agitator, leader, and ex-leader, had faced 5000 white Chicagoans who want­ed to see his throat slit. He told those few reporters who had not left for cover: “I’ve never seen so much hostility in a demonstration before. And I’ve been all over the South.” 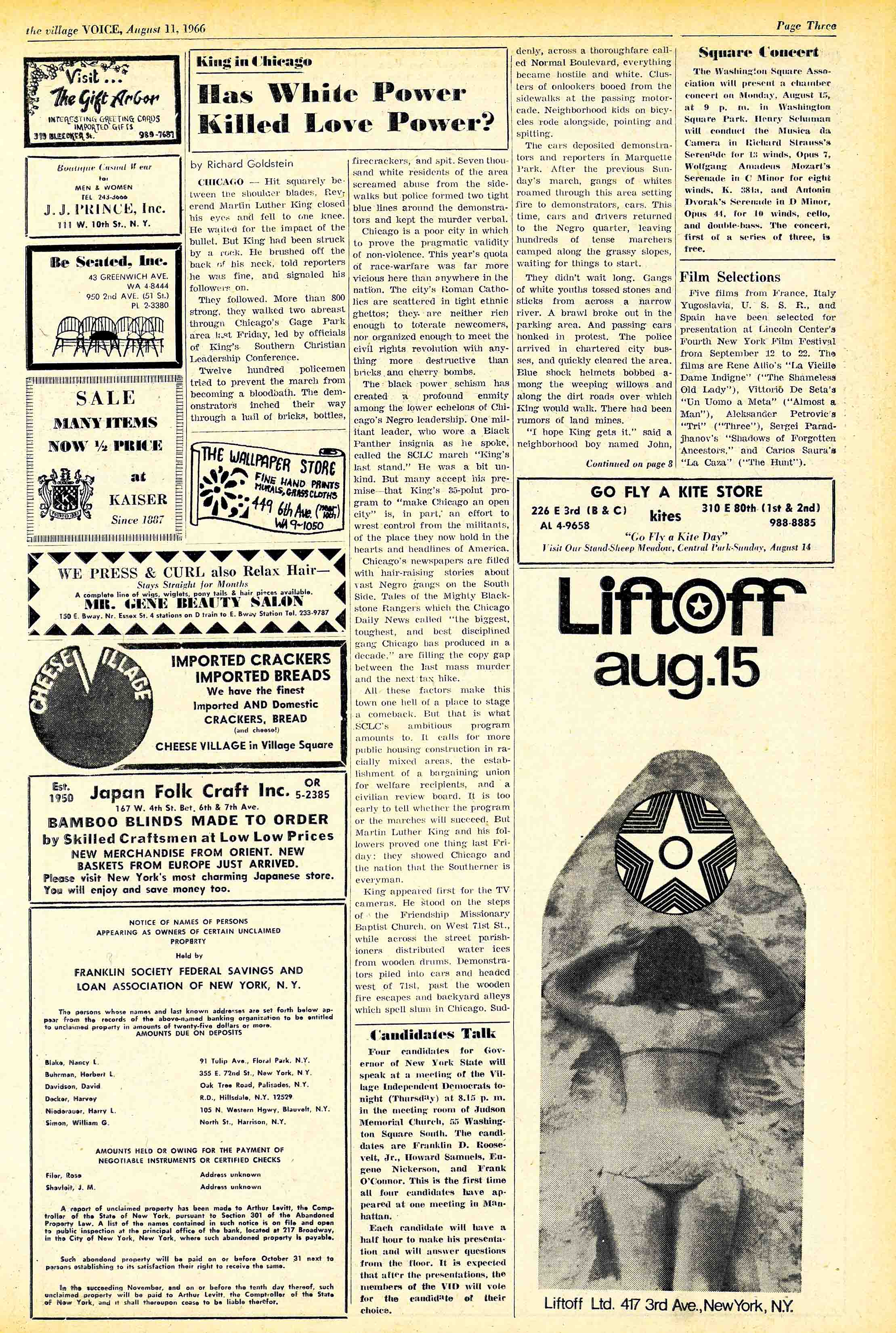 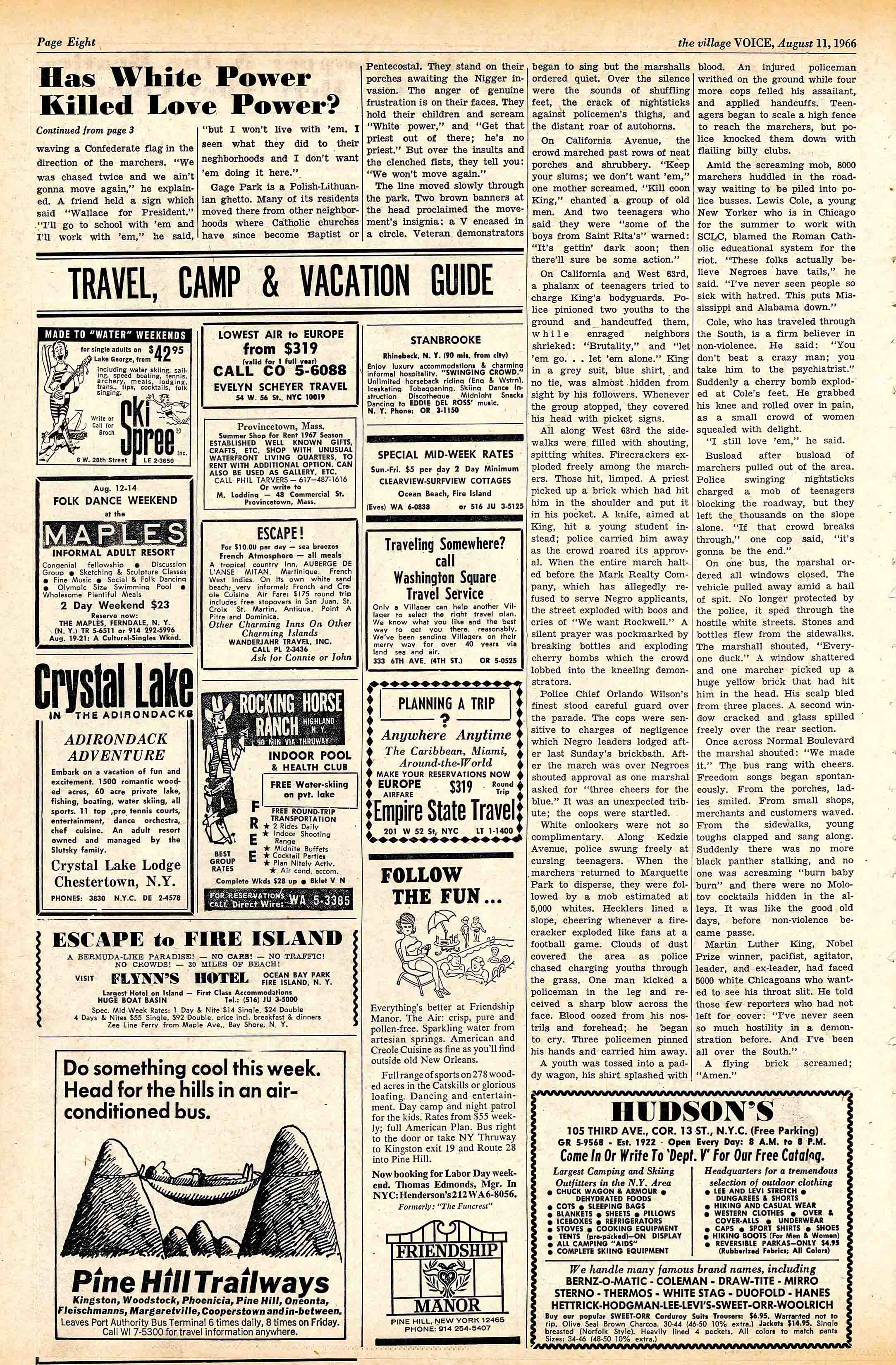 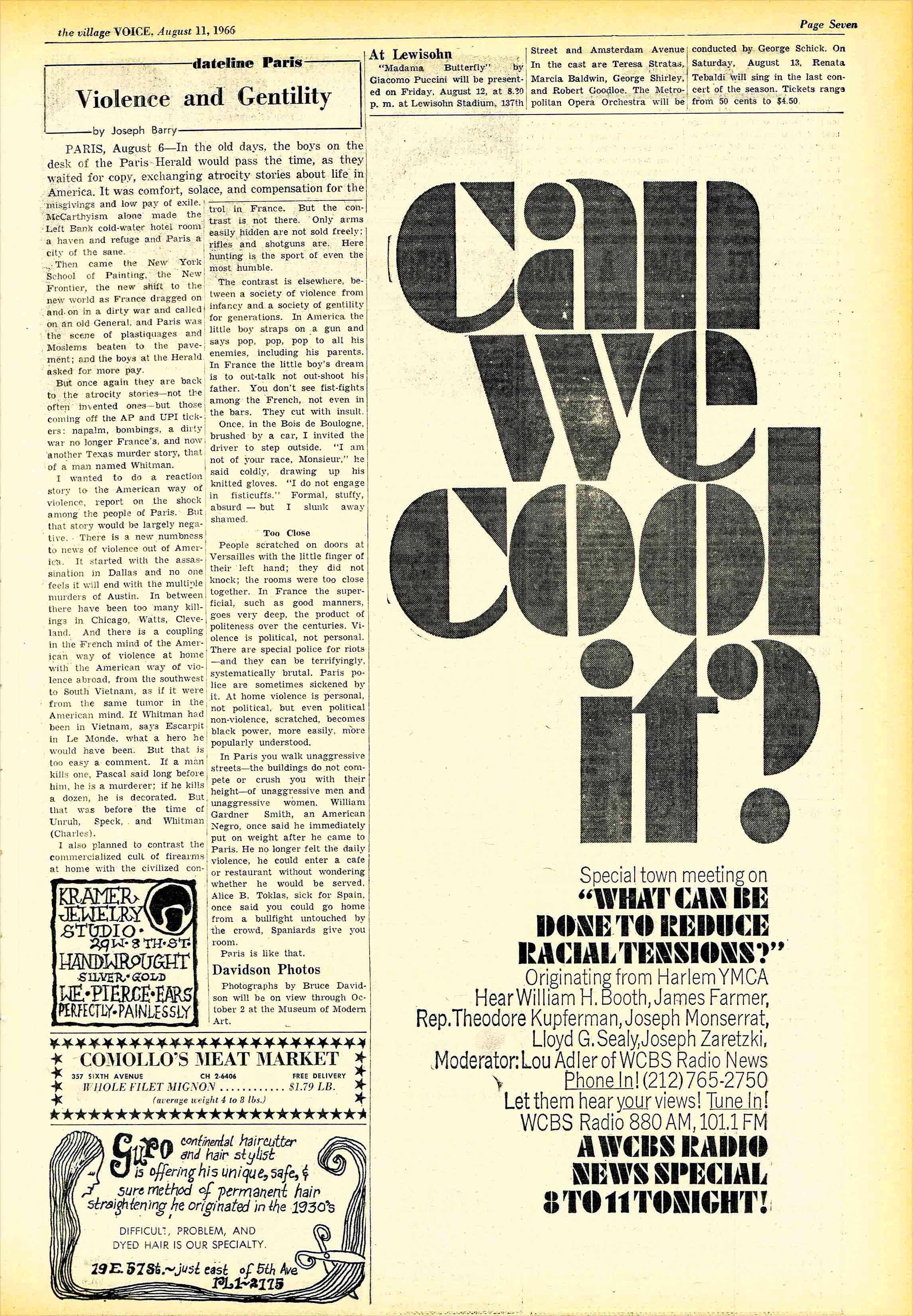