WASHINGTON, D.C. — Make no mistake. The goal of the Republican Revolution is to dismantle government as we know it.

They aim to eliminate at least six cabinet-level departments, can smaller agencies, and combine others into much smaller units. In addition, the Republican right will move promptly to end farm subsidies, speed up executions, bundle up all social-welfare programs in block grants and send them back to the States, and move forward with privatization of the social security system.

This new right sees itself as a wrecking crew for the state governors, who will wield all power in the new America. If they are successful in dismantling govern­ment as we now know it, the crew will abolish their own full-time jobs and turn Con­gress into a part­-time institution.

Consider just a few of the planks of the real Republican contract, as set forth by the folks who put together the Reagan transition in 1980 — the Heritage Foundation:

WOMEN AND GAYS. The Republicans have yet to say how they will tackle the politically charged issues of abor­tion and gay rights. But they have weighed in on the mili­tary. The right wants gays out of the armed services, and if the courts don’t rule in their favor, they will draft legisla­tion to get them out. Women are already too involved in combat, and if the administration doesn’t pull them back, the Republicans will act in Congress to keep them off the front lines.

THE ENVIRONMENT. Return the public lands, compris­ing one-third of the nation’s landmass (as well as the bulk of its energy resources, national parks, forests, ranges, moun­tains, deserts, and the outer-continental shelf), to state gov­ernments for use as they see fit. Prevent the government from making new environmental regulations that encroach on private property — such as blocking a new factory over pollution concerns or halting the drilling of an oil well in a city’s backyard.

FEDERAL REGULATIONS. The rules that govern much of the nation’s economic life will go. The GOP will propose an immediate moratorium while new legislation to end the complex web of laws is drafted. New regulations would re­quire a two-step procedure in which, after legislation is passed, Congress would have to pass a second act setting forth in detail how it would be implemented. If it is decid­ed that the legislation would put a drag on the economy, then other related regulations would be cut back.

LABOR. The minimum wage is out the window. Fair la­bor standards will go, as will current federal efforts to con­trol unsafe labor practices in the workplace. The Republi­cans will move to terminate Davis-Bacon (1931), Walsh-Healy (1936), and Service Contract (1965) — acts that require the federal government to pay union scale wage rates for anything made under contract with the federal gov­ernment. “These laws,” the Heritage Foundation argues, “make it virtually impossible for low-skilled workers, especially minorities and young people, to be hired on govern­ment jobs because their productivity cannot justify the man­dated wages. Besides their inherent unfairness, these laws cost taxpayers dearly.”

FOREIGN AID. The Republicans want to end the U.S. Agency for International Development as it currently ex­ists, tying economic development to free-market economies. The Heritage Foundation has published an Index of Eco­nomic Freedom, which argues that U.S. foreign aid reform should be rooted in the recognition that “the free market is the only proven method of promot­ing economic growth and development.” By using the In­dex, policymakers can identify which countries are making progress toward free-market reforms and which are not.

THAT’S JUST THE BEGINNING. Delaware Re­publican Bill Roth, incoming chair of the Senate Governmental Affairs Committee, proposes to cut federal agencies by up to 50 percent, in some cases privatizing the work. But his real goal is to eliminate entire agencies. Chief candidates are the Appalachi­an Regional Commission, the Interstate Commerce Commission, and the Economic Development Administration. Roth is eager to abolish six entire federal de­partments: Commerce, Transportation, Interior, Energy, HUD, and Labor.

The Republicans will try to do away with Congress as we know it. They will begin by defunding committees, cen­tralizing power under the Speaker as they return various functions to state governments. At the same time, they want to reduce by one-quarter to one-third the $329 million al­located every year to the General Accounting Office, which performs independent studies for members of Congress. The Republicans would privatize GAO, subcontracting its functions to the lowest bidders. They also want to shift the Government Printing Office to the executive branch, and then privatize most of what it does. The Library of Con­gress is next in line for cuts, especially the Congressional Re­search Service, which provides research for members. The GOP would like to get rid of the Office of Technology As­sessment, or at least sharply reduce its functions.

THE RESULT of these cuts will be to drastically re­duce the flow of information to legislators on intri­cate issues such as telecommunication, the effects of biochemical pollution, and genetic engineering, not to mention hampering investigations into private-­sector fraud and high-tech crimes. But the most tangible effect of the Republican ax will be felt in the District of Columbia, the vio­lence-prone capital that is virtually bankrupt. The federal cuts will almost surely result in the loss of tens of thousands of jobs, devastating the black and white middle classes in the city. As the capital disintegrates, Congress can take back con­trol of the city’s finances and arrange for its ultimate disposal as a subdivision of the state of Maryland. So much for D.C. statehood — and the likely addition of two black senators.

Cutting down domestic social programs and the agen­cies that manage them frees up money for defense, which the right wants to increase. They also intend to cancel the War Powers Act, end the Anti-Ballistic Missile treaty, and reverse the current limits on an arms buildup.

Such moves bolster the corporations that depend on mil­itary contracts. The private sector, in fact, will reap a windfall from the Republican revolution. Undertaken in the name of decentralization, the right’s program amounts to a scheme for turning over more and more power to private corpora­tions. When turning a governmental function back to the states complicates matters for corporations, as in the regula­tion of private health insurance plans, then right-wingers fa­vor federal regulation to accommodate the corporate interests.

MEANWHILE, IN THE White House, President Bill Clinton is under siege, from all quarters: drive-by shooters, gun-toting survivalists, homeless men brandishing knives, wackos on the Hill. But un­like most sieges, the object here is not to get the enemy to surrender. Bill Clinton can’t surrender. Not that he hasn’t tried. Since his election, Clinton has hoisted the white flag time after time — on gays, on supporting cities, on social welfare, on Bosnia, on the environment. But the Republicans refuse to accept his surrender. That’s because he’s more useful to them where he is. They want him to remain permanently on his knees, to go through the ritual act of surrender again and again. They want Clinton in office so they can keep taunting him. And the longer he stays, the more opportu­nities they have to wear down any remaining opposition to their revolution in American politics.

What conceivable purpose does Clinton serve by sitting in the White House during this period of turmoil? The un­happy truth is that he serves the Republican interest in de­moralizing the electorate. The more disheartened people are by the spectacle of a lame-duck president, the less likely they will be to vote — and the Republicans need a low turnout in 1996 to win the presidency. They won Congress with 35 percent of the electorate. You could win a House seat with as little as 18 percent of the vote. The way to discourage peo­ple from voting is to keep them dispirited. What better ve­hicle for such a project than the hapless figure of Bill Clinton?

Of course, it’s always possible that Clinton will, for the first time in his life, discover his nerve. After all, Nixon faced a hostile Congress and that didn’t stop him from ad­vocating his policies. Nor did it stop Reagan or Bush. When the Democrats blocked Reagan, he pushed ahead rather than cave in.

But Clinton is different. He has no core convictions — he swings in the wind. His only institutional connection to the American people is within the Democratic party; and that barely exists except in the bank accounts of lobbyists and corpora­tions. As for the Democratic Na­tional Committee, it is less an ap­pendage of Clinton than of the lobbyists and corporate figureheads who own the party.

What’s left of the Democrats is to be found in Congress, mostly in the House, where Dick Gephardt, the minority leader, and David Bo­nior, the whip, may build a follow­ing. Both men fought Clinton on NAFTA and GATT, the two defining issues of this Congress. There’s almost no reason for them to side with the White House now; they will have to forge their own coalitions and discover their own politics.

(Just to remember how differ­ent things might have been, note that, had Clinton stood with the rest of his party and fought these two pieces of legislation, the Democrats, even though in the minority, would still be calling the shots in the Re­publican Congress. Instead of spend­ing the first 100 days debating the Contract with America, the Democ­rats could fire up a debate on GATT that might split the Republican majority. But there will be no debate be­cause Clinton has already given away the store.)

With the Republicans pulling the levers in Congress, they can eas­ily crank up an investigation of Whitewater, pushing the two independent counsels already working on the probe. The possibilities for investigating Clinton are endless, reaching from Whitewater to the Tyson chicken empire. That includes Hillary Clinton’s mysterious com­modity trades and now accusations of cash payments sent by Tyson to Clinton himself. The Vincent Foster case is still alive. There are now ques­tions about Clinton’s past campaign funding and the behavior of numer­ous White House staffers. Beyond that, there is the continuing saga of his personal relationships. Any or all of these issues can be easily brought into the spotlight on Capitol Hill, and Clinton can be made to either apologize one more time or, if it is in the Republican interest, forced to resign.

Under this continuing pressure, the Democratic Party could actually break up. Since the election, both Gephardt and Bonior have made it clear they will turn their backs on the White House. Paul Tsongas is push­ing for a third-party movement, and Jackson hasn’t given up the presi­dential ghost. Meanwhile, Clinton’s own supporters are clamoring for the president to follow them to the right.

It’s hard to imagine a scenario that would deny the right-wing control of the White House in 1996. Under the best of circumstances it will take many years for what’s left of the Democratic Party to regroup. In the meantime, the Republicans have a clear path ahead. The only thing standing in their way is Bill Clinton, who really is no obstacle at all. ❖ 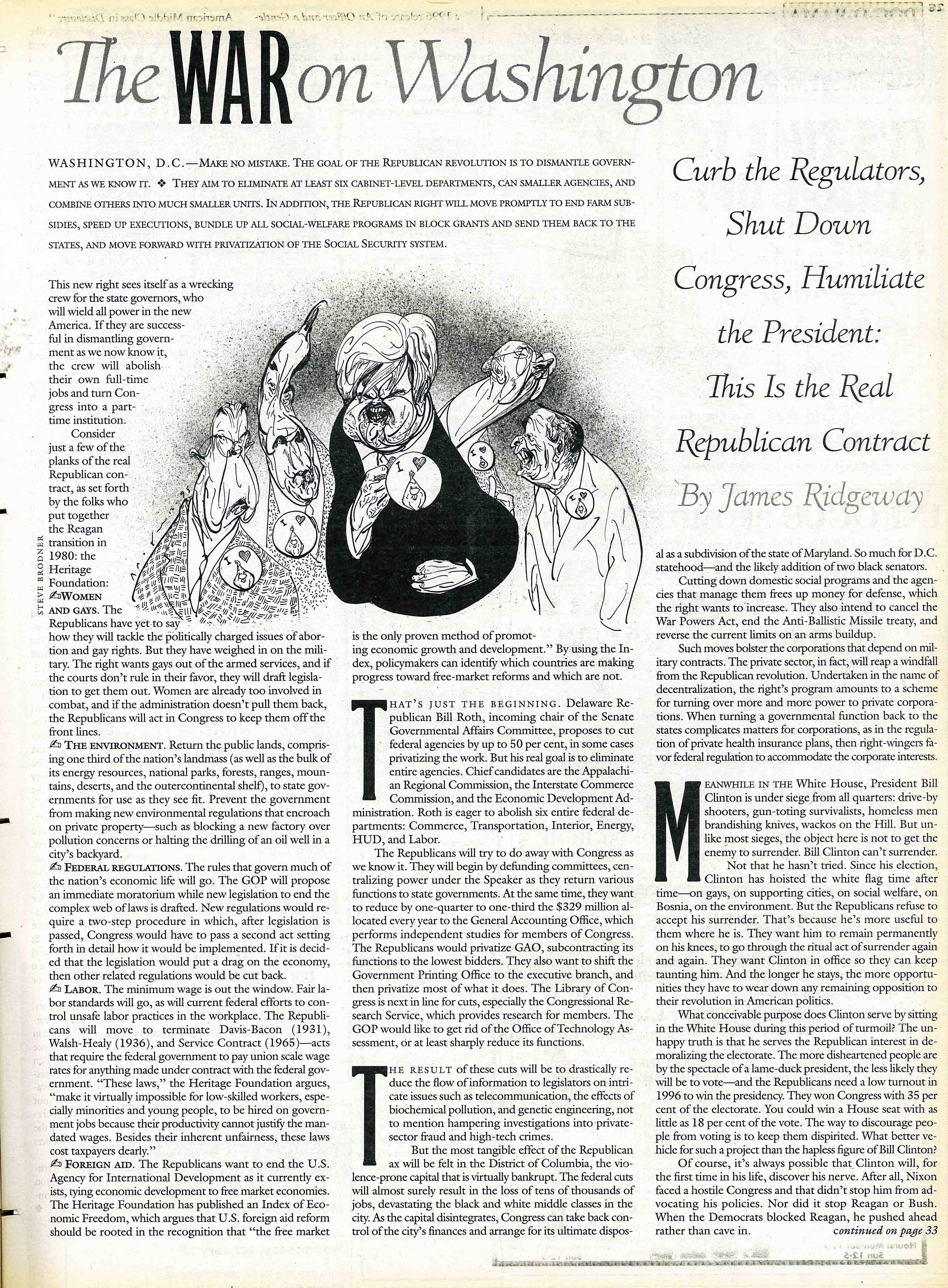 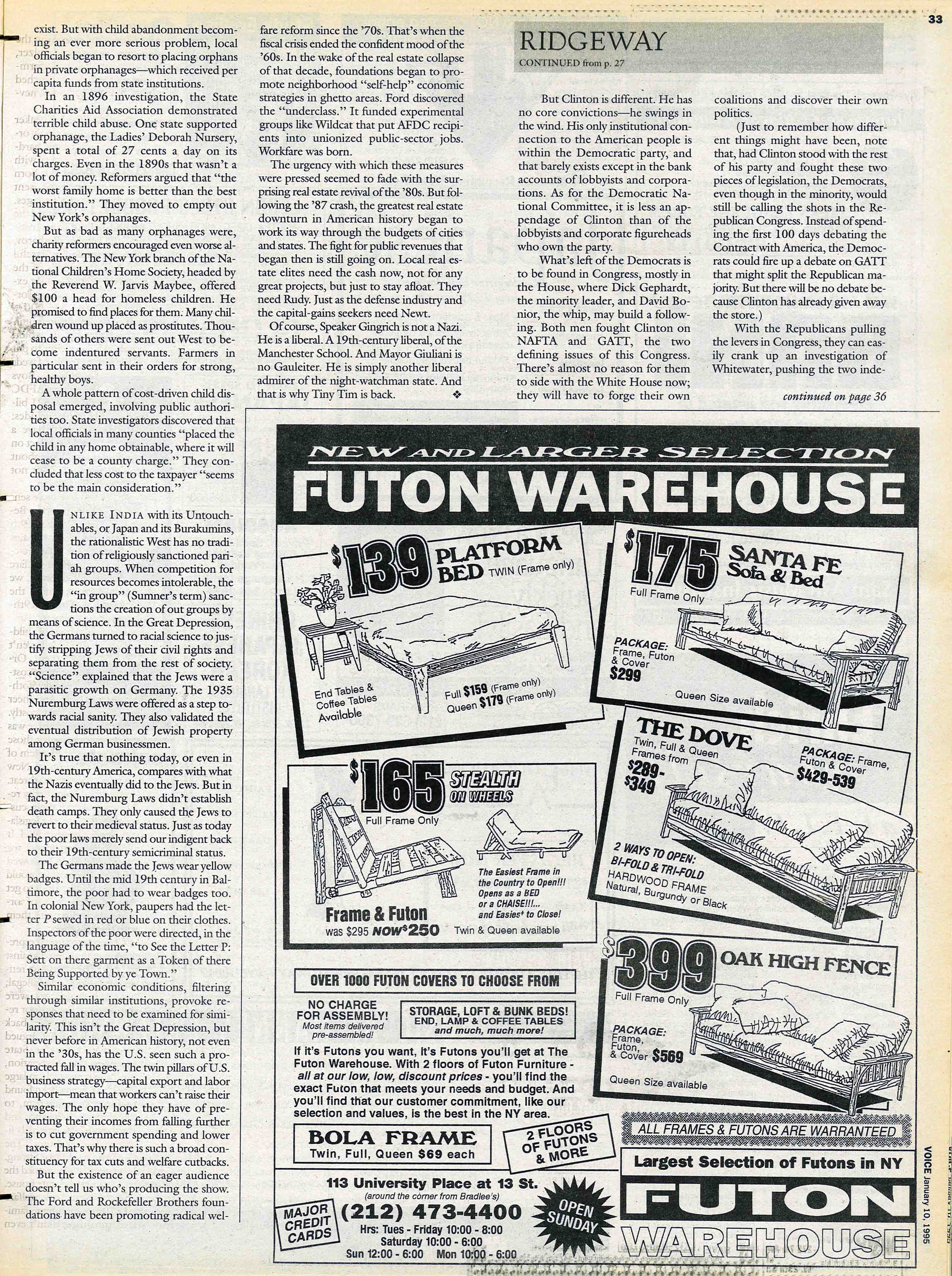 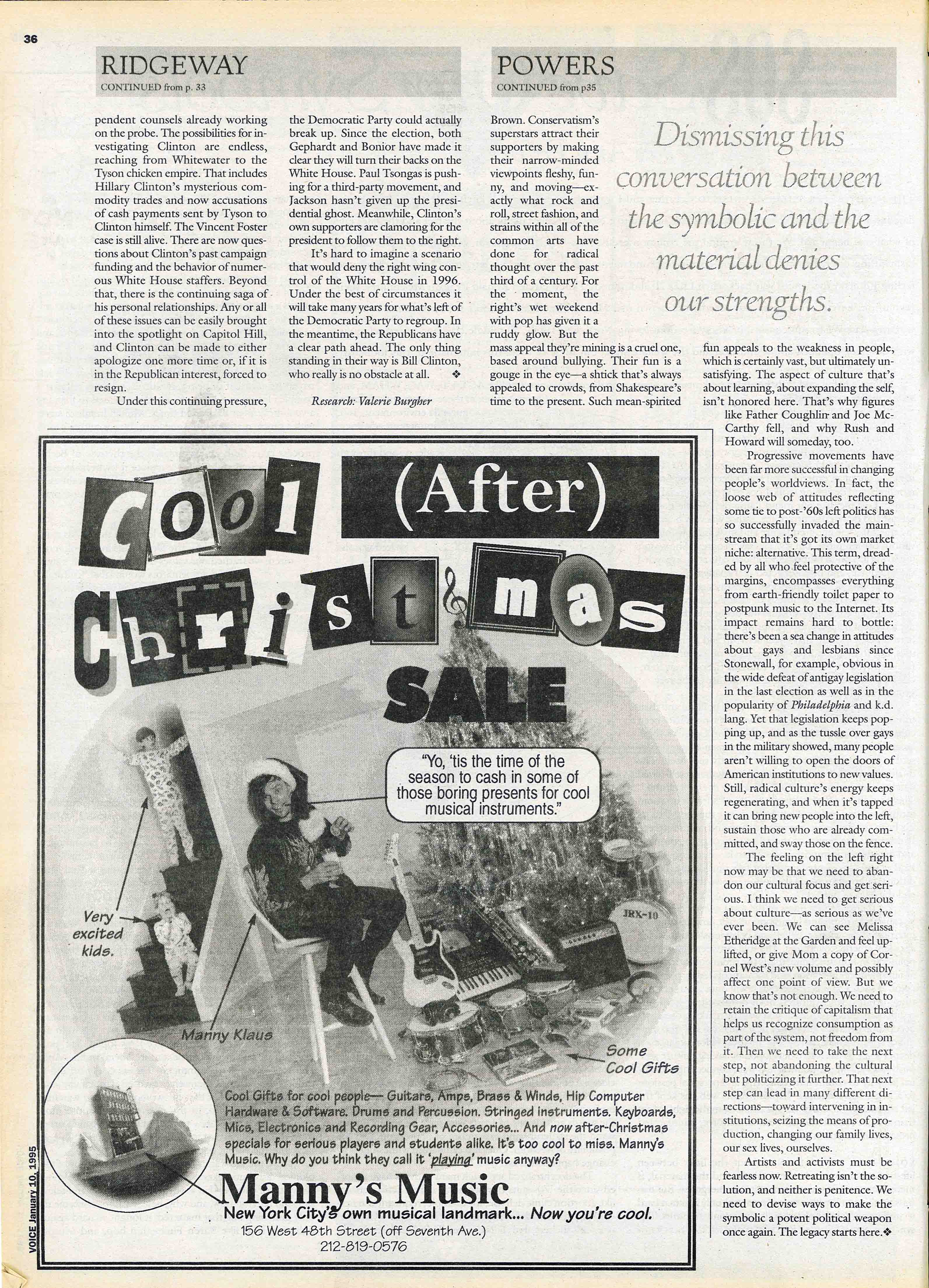