Punk rock was kind of a joke in the first place, as a listen to Count Five or the Seeds makes clear, and given the campily ironic distance most CBGB groups bring to it, it becomes a joke once removed, which is like seeing the punch line approaching from a mile away. It’s been said that the punk rock “renaissance” is really just an invention of media in desperate need of something new to pretend to be saying about American youth; the trouble with that theory is that most of the bands seem to be buying the hype. If that’s the best anybody can come up with to say about this generation, then this generation may not be very interesting in the first place.

But all of that might be a blessing in disguise. Because, as we all know, if you’re not expecting anything from a record, you’ll be doubly pleased and surprised if it’s wonderful. Blondie is the second group from the New York “underground” club scene (discounting Patti Smith and the Dictators) to get recorded, and when I called up my friends to tell them what a delight I thought their album was, they sniffed, “Oh come on, haven’t you seen ’em live?” No I haven’t, but then I don’t care much for most live rock anyway and I know a great album when I hear one.

Like most of the other stuff coming out these days, Blondie’s album (produced by Richard Gottehrer, who wrote “My Boyfriend’s Back” and produced the original “Hang On, Sloopy”), is a pastiche of ’60s rock moves. Debbie Blondie herself has the Shangri-Las/Crys­tals girl group sound down to a perfect snotty whine, but unlike Patti Smith, she never comes across as snotty or pretentious, and, as “Man Overboard” and “In the Flesh” respectively demonstrate, she knows it’s not uncool to sound like Cher or Kathy (“A Thousand Stars”) Young once in a while. She gets off her best Shangri-Las moves in the single “[Se]X Offender” and “Rip Her to Shreds,” where I’m sure all of us of whatever sex will be able to empathize with her reaction to an urban archetype: “Red eyeshadow, green mascara/Yecch! She’s too much!”

The band have hauled all their ’60s readymades out of the toy chest, polished them up so they don’t sound like nostalgia or some horrible “tribute,” and set them spinning around one [an]other like so many tops in solid two- ­and three-minute cuts. “Rifle Range” spotlights Jorgen (“Apache”) Ingmann style guitar, while in “Rip Her to Shreds” I count (besides a fine mixture of Velvets and Shangri-Las vocal flourishes) some “Shakin’ All Over” guitar, a Question Mark and the Mysterians organ break that will reappear in various contexts throughout the album, and ensemble touches highly reminiscent at various times of the Doors, the Seeds, and the Strawberry Alarm Clock. And I mean good Strawberry Alarm Clock! The Spectorish “X Offender” contains the best roller rink organ since the Sir Douglas Quintet, the best drums since “Born to Run,” the best castanets since “Mother of Pearl,” and the best surf guitar break since “I’m Set Free.”

What makes Blondie’s first set more than just a fanzine-mentality collection of 10-year-old styles by 25-year-old diehards is that it consistently conveys the same energetic conviction in its dumbness as the original punk rockers, yet like, say, the New York Dolls, the group are implicitly intelligent enough not to ram their understand­ing of earlier rock ‘n’ roll down your throat. Like the Ramones, they have both drive and a sense of humor. Unlike the Ramones, they don’t condescend to their material, even when Debbie Blondie’s singing, over a Latin beat and “Arriba!” type cries, “Giant ants from space/stuffed the human race/Then they eat your face/Never leave a trace/La la la la…” Cap that one and the album with an ending that perfectly parodies Neil Young’s “Broken Arrow,” and you’ve got what rock ‘n’ roll has always really stood for: the sort of unselfconscious fun that transcends both scenes and generic restrictions. 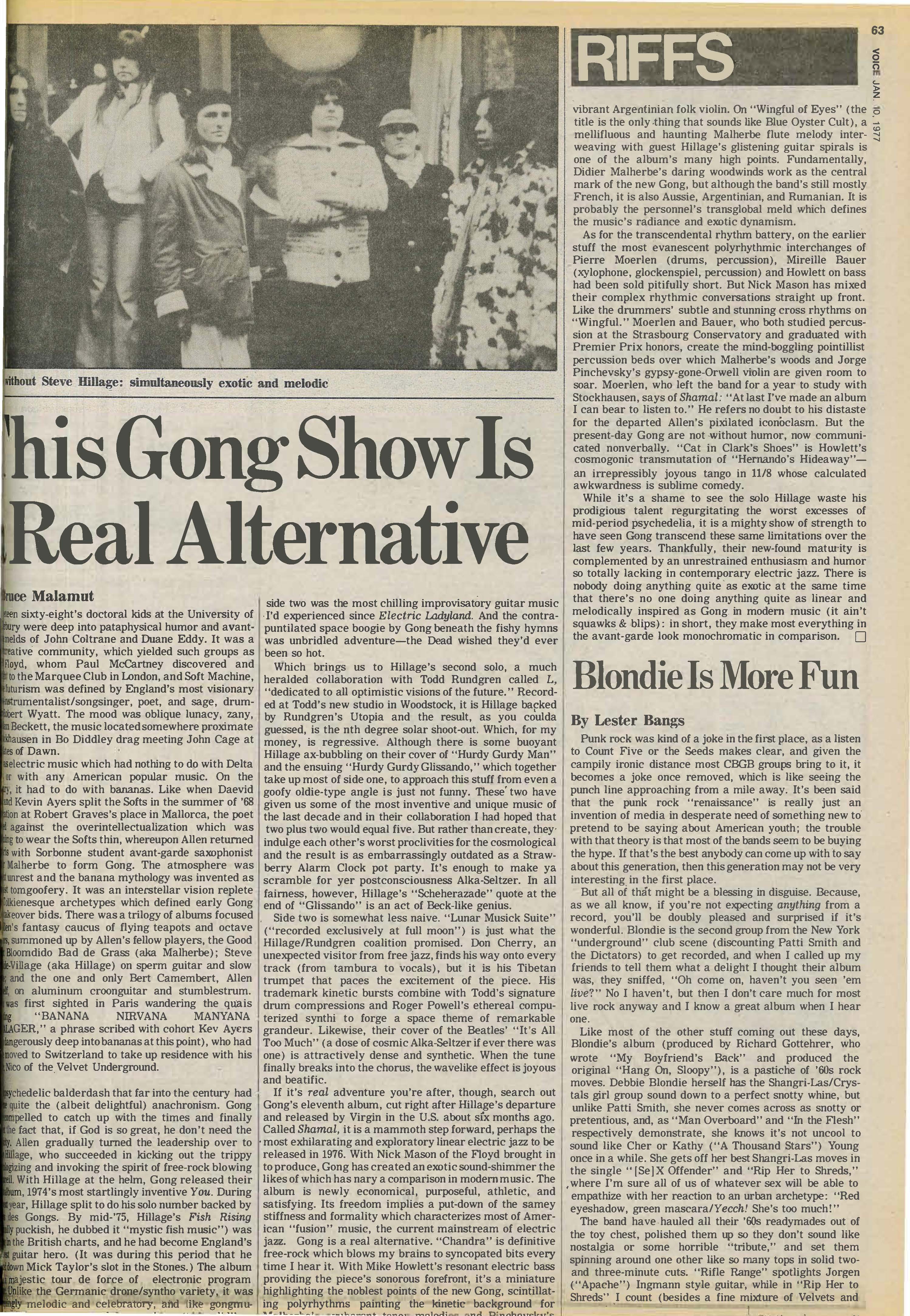 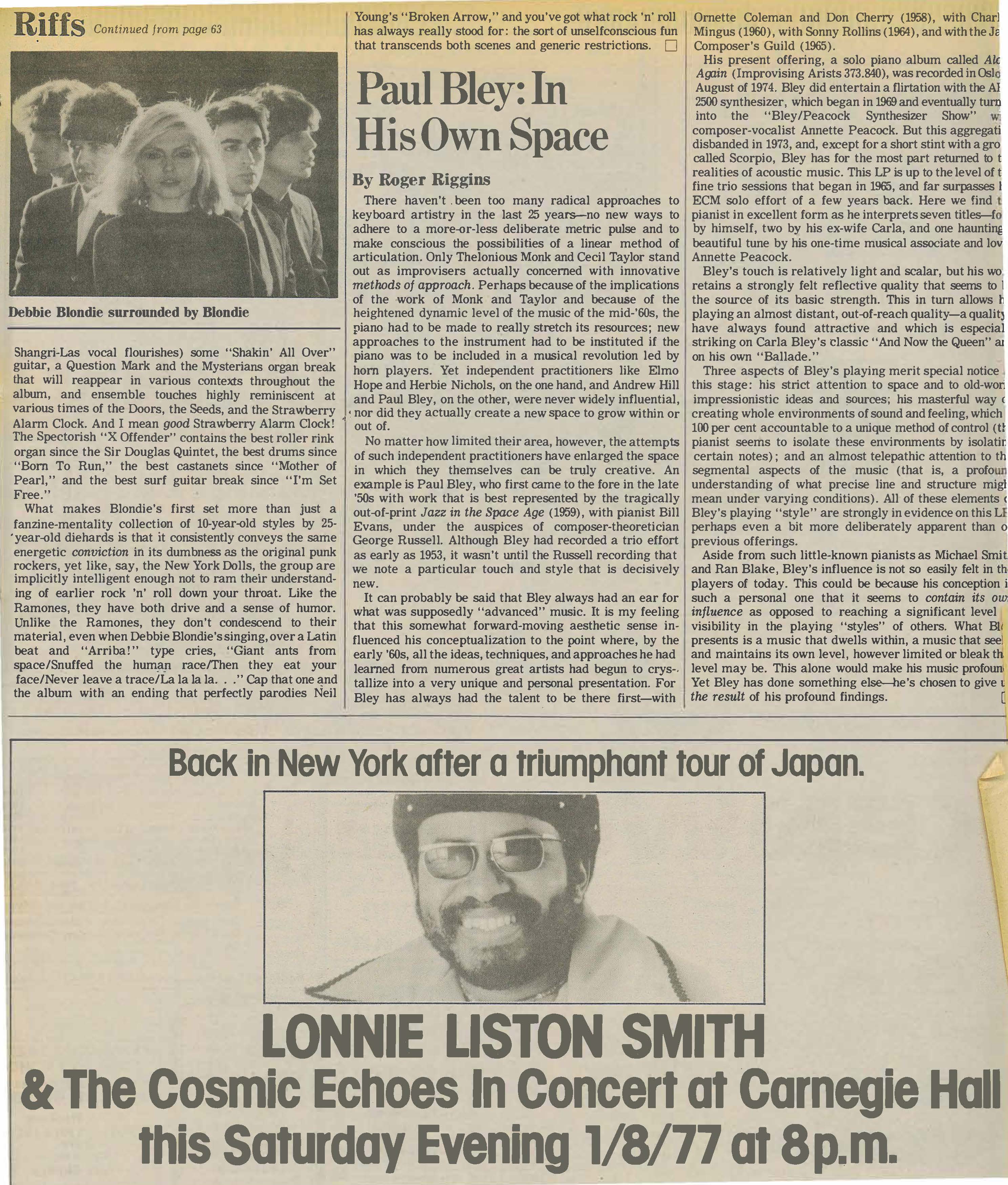