The jury began its deliberations last Wednesday. By coincidence, that was the day Nicky Barnes’s troubles began. He came back from lunch and said he was feeling sad. One of his favorite women had taken it into her head to lay down guidelines. “I had to tell her that the relationship couldn’t continue if she were going to erect barriers,” he said. It was her scent, above all, that he would miss; he might have to go to the Far East to find a scent like that. He was going to wear black the next day. “Maybe she’ll wear black, too.” said Nicky Barnes. “And bring her whip!” A charge of electricity shot through him. He shook his hand from the wrist and grinned.

Nicky Barnes was standing at the rail with his feet planted firmly apart. The clothes he was wearing marked a metamorphosis from the muted blues in which he had wrapped himself for the trial. Against the rust-colored shirt, which fit his weightlifter’s physique like armor, he had placed a copperish tie and a wool jacket of a delicate gray-and-purple hound’s-tooth weave. His olive-drab trousers were cut as round as columns, and were held up by a lizard belt. His tan ankle boots were made to be coveted. He wore glasses that were tinted lilac with purplish frames; set into the arms were little metal discs embossed with the Playboy rabbit. He never did change into mourning.

On Wednesday, the jury made the 14 lawyers happy. From the notes that the forelady sent out, it was clear that the jurors had put aside the first two counts — the con­spiracy count, which embraced all the 14 black defendants, and the criminal-enterprise count, which alleged that Nicky Barnes was the chief executive of the General Motors of heroin. They had plunged into the 10 substantive counts, which alleged specific acts of drug selling and possession of guns.

Due to an unprecedented decision by the judge Henry “Speed” Werker, the names and addresses of the jurors were kept secret. The lawyers and the prosecutors knew their occupations and the counties in which they live; apart from that, they were only numbers. The government had insisted that the jury be sequestered, which the defense considered a stroke of luck since it meant that fewer executive types from Westchester could afford to serve and more than the usual number of urban blacks were seated — five in all. As the trial progressed, the lawyers guessed that three or four of the whites were rooting for the prosecution — but the only one they knew to be an enemy was blond, Teutonic Number 7, a loan officer from Westchester. The lawyers called him “the Nazi.” One afternoon, from within the bus that was taking the jury back to sequestration, Juror Number 7 had stared straight at one of the lawyers, Paul Goldberger, and given him the finger. The judge saw no reason to query Number 7 about this gesture.

Now, each time the jurors came out to hear the court reporter read the testimony they had requested, the lawyers studied the faces, read the body language, and got happier.

When Number 7 came out to hear the testimony, his face was flushed with anger. His ally, Number 8, the free-lance artist from Radcliffe, was pale and drawn. By contrast, the blacks looked serene and confident. The blacks were thought to be solidly behind their fellow blacks. Nicky Barnes’s lawyer, David Breitbart, became convinced that Number 3, the white lady with gray hair and glasses, was smiling at him. “Are you kidding?” said Breitbart’s partner, Paul Goldberger, “She was smiling at you when she came in, she was smiling at you when she went out, and she was winking in between.”

As the lawyers walked out of the courthouse on Wednes­day night, they were talking about the fact that the U. S. attorney for the Southern District of New York had never lost a narcotics conspiracy case. “What about Tuttino?” said one of the lawyers. “They lost Tuttino.”

“Yeah,” said another lawyer, “but they lost it the wrong way.” When the foreman announced the acquittals in Tuttino the defendants broke up laughing. They knew what the verdict was going to be because they had paid for it.

On, Thursday morning, when the fog came in, Nicky Barnes arrived in court an hour late and the U.S. attorneys threatened to remand him to the Metropolitan Correctional Center. This made Nicky Barnes furious. He stood behind the rail shaking his head, and there were tears of rage in his voice: “I got more motherfucking reason than anybody to be here,” he said. “What’s everyone trying to do? — try­ing to make a buck, right? I got $300,000 of them here. Three hundred thousand motherfucking bucks. And they don’t think I’m going to show up!”

The other defendants sat around the defense tables playing tonk or dominoes, or reading car magazines. All day long the jury kept sending in notes, from which a definite pattern began to emerge: All of the notes requested direct testimony from government witnesses; none demanded cross-examination, in which defense law­yers had destroyed some of those witnesses. The lawyers decided that brainy Number 1, the Smith graduate who works at the Council on Foreign Relations, was running the jury, and wasn’t running it in a friendly way. Late in the afternoon, a note arrived that spelled death. The jury wanted to hear again the judge’s charge on the second count. Which meant that they must have already returned to the first count and found that a conspiracy existed. Now they were getting ready to conclude that Nicky Barnes was guilty of having headed a criminal enterprise.

When the clerk announced another note at 6 o’clock most of the lawyers looked as if they were going to cry. This had to be the verdict. The courtroom began to fill up with smiling U.S. attorneys in pin-striped suits. “They smell the blood,” said a morose lawyer.

But the note didn’t announce a verdict. It was a request to see the videotape of Stevie Baker removing large amounts of mannite for cutting heroin from the trunk of his car and taking it into his apartment. The smiles fell off the U.S. attorneys and the defense lawyers picked them up. Three television sets were set up and everybody craned his neck to watch the Stevie Baker tape, which was clear as crystal. Every so often the forelady from the Council on Foreign Relations would hold up a finger and the techni­cian would stop the tape, which caused the television image to fuzz up, obscuring the features of the putative Stevie Baker. When the viewing was over and the jurors had filed out, all the defense lawyers were ecstatic. “It wasn’t Stevie Baker!” they kept saying, even though they knew it was. Even Stevie Baker knew it was Stevie Baker, and had confessed after being shown the tape. But compared to certain death, anything looks wonderful.

The next and final morning, Friday, found Nicky Barnes sitting in the empty jury box, looking bleary. His olive-drab trousers were badly wrinkled.

“You get any sleep, Nicky?”

“No man, they followed me all night. I couldn’t get any sleep.”

Louis Diaz and Bobby Nieves, the same two agents of the Drug Enforcement Administration who had been watching Nicky Barnes ever since November 1976, and who had testified against him in court, had followed him to make sure he didn’t go to the Far East. “I didn’t want to take them home with me,” said Nicky Barnes, “so I went to a certain hotel. I don’t ever rent a room there. I always give the clerk $20 and I don’t sign the register.” The garage was closed, so he parked his $22,000 Mercedes right in front of the hotel, assuming that Diaz and Nieves would watch over it for him. Unfortunately, when the two agents went into the hotel they found that Nicky Barnes wasn’t registered, and that the clerk hadn’t ever heard of him. “They went crazy,” Nicky Barnes said. “Meantime, the NYPD come along and tows my Mercedes. That’s $75 to get it out, and I only got about $150. And when I get to the pound, they say it’s $300 with all the parking tickets I haven’t paid.” So Nicky Barnes was driven to court that morning by agents Diaz and Nieves of the DEA.

Early Friday morning, the jury sent in another note which made the defense take heart. They wanted to hear a tape from February 26, 1977, which the DEA had recorded from a bug in the office of the Harlem Rivers Motor Garage, 145th Street and Lenox, which the government said was the corporate headquarter of the Nicky Barnes drug ring. The government claimed that a fellow named Bucky Beaver could be heard saying, “…got to pick up a kilo out of Nicky’s car now.” The defense had put on an expert in sound analysis who swore that the word was not “kilo,” but “payroll.” Summing up the case, Assistant U. S. Attorney Tom Sear insisted that the word was “kilo.” He didn’t even bother to make the argument that the word “payroll” would be just as damaging if applied to someone who was supposed to be the boss of a large drug business.

The tape was played and the word was clearly, unmis­takably “payroll.” After hearing “payroll,” the defendants took off their earphones and leaned back. The jurors kept their earphones on and asked to hear the tape again. When the word “payroll” came up, several of them exchanged glances.

The joy of the lawyers was unbounded. They were positive that the battle had turned, and compared themselves to the Russians at Stalingrad. The U.S. attorneys wore expressions of worry. Upstairs in the cafeteria, Tom Sear came down the aisle with a forced smile on his face and Jerry Feldman, another of Breitbart’s partners, asked him why he was smiling. “I don’t know,” he said. “I don’t know.”

Just before 3 o’clock, the clerk came in and announced that the jury had reached a verdict. Some of the defendants started to fidget, and the tonk game stopped until Waymin “Wop” Hines, the smallest of the defendants, but also one of the toughest, said, “Motherfucker, deal another hand.” A few minutes later, the forelady rose and in her soft voice said the word “guilty” over and over again. A couple of women in the audience started sobbing, but none of the defendants turned a hair. Nicky Barnes sat straight in his chair and looked blandly at the jury. When the judge had thanked all the jurors, and dismissed them, the youngest of the defense attorneys, Edward Hayes, went over to Nicky Barnes and shook his hand. “I always thought you were 100 per cent man,” he said.

Nicky Barnes put his hand on Edward Hayes’ shoulder and said, “You know, kid, I never thought they were going to get me.” 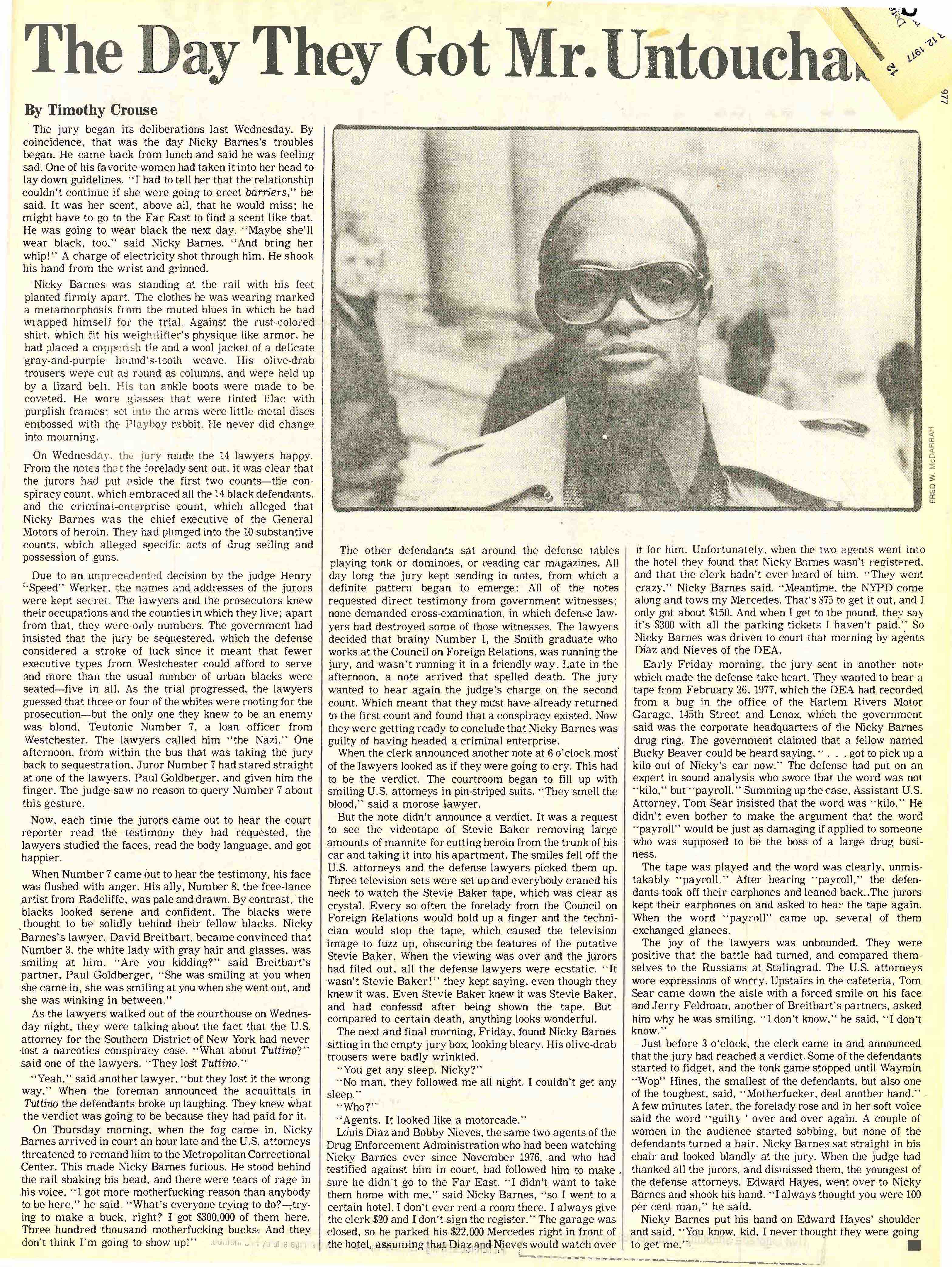