Nicky Barnes: Geronimo Takes On the Man No One Can Convict
October 24, 1977

The federal courthouse in Foley Square has a far more cathedral air than its poor neighbor two blocks to the north, the criminal courthouse at 100 Centre Street. The federal courthouse has cushions on the benches, ecclesiastical ceiling lamps, and clerks who make everybody stand up when the judge comes in. Federal cases, which often concern intricate infractions of capi­talist ground rules, produce long, lucrative trials. It’s the great Wall Street firms that make Foley Square their home away from home. But right now, something a little different is going down under the eagle seal. Fifteen of the city’s most sought after criminal lawyers are currently appearing in room 318, defending Nicky Barnes and his 14 codefendants.

The 14 codefendants and their 14 lawyers are crammed along the L-shape of two long defense tables — the lawyers in ties, the defendants casual. The U.S. attorneys, in their dark suits, sit enclosed by the L, grouped around their gigantic tape record­er and its two black speakers. At the right hand end of the defense table, nearest the jury box, sits the star, Nicky Barnes, the most famous alleged drug dealer in the world. He is a muscular man, 44 years old, no taller than five foot eight inches, and precise in all his movements. Mythology holds him to be the most powerful man in Harlem. Perhaps for this reason, Jimmy Breslin recently put him in a suit of royal purple. That was the wee touch of the artist. The color Nicky Barnes actually favors for courtroom wear is a washed-out blue, in either corduroy or denim.

The cops have had Nicky Barnes under surveillance for years. Since 1973, he’s been tried for attempted bribery, gun posses­sion, and murder; but the police work was sloppy, the cases were shaky, and his lawyer, David Breitbart, was a scrapper. The street regards Barnes as the man no one can convict, “Mr. Untouchable.” Now the federal prosecutor has charged him with having run a massive conspiracy to distribute heroin from January 1974 through March 1977. Breitbart claims that his client is nothing but an extremely successful real-estate operator who’s being persecuted for flaunting his money, his fancy cars, and his aversion to whitey. Barnes hasn’t done any serious time since he went to Greenhaven 12 years ago on a narcotics rap. During his incarceration he subscribed to 37 law journals. A real-estate man can’t have too much legal training.

The man who handed out turkeys last Christmas at 126th and St. Nicholas has attracted a following. The “defense” side of the courtroom, on the left, is usually crowded with his fans, and occasionally he leaves off his absorption in the law to do a turn for them. The other day, when the courtroom became overly chilly, he picked up a 14-foot window pole, pretending it was very heavy, and made a bravura show of closing the windows. His admirers burst into applause.

The U.S. attorney for the southern dis­trict of New York, Robert Fiske, Jr., is personally handling the prosecution — these big conspiracy cases can be tricky. On the opening day, he unveiled a chart that purported to represent the positions of all 15 defendants in the heroin empire. Here, at the bottom, were the street sellers; here, higher up, was the man who washed the money, changing small bills into large ones; and here, at the very top, almost totally insulated from contact with overt criminality, was the man they all called “sir” — Nicky Barnes. In ensuing days, Fiske has played tape after tape. The tapes contain the garbled voices of people on the chart, who complicate things by constantly referring to each other by aliases and nicknames: “Fat Stevie,” “Bo,” “Jazz,” “Radio,” “JJ,” “Wop,” “Bucky Beaver,” etc. The judge, Henry Werker, added to the confusion by informing the jury that in his youth he’d been known not only as Hank but also as ”Speed.” “I had a very heavy foot as a young man,” he confessed.

Last week, U.S. attorney Fiske put on his first major witness, Robert Geronimo, a thrice-convicted flimflam artist whose spe­ciality was conning people into buying hot cars and TV sets. In the fall of 1976, when Geronimo agreed to cooperate with the government, the Drug Enforcement Ad­ministration wired him for sound and en­couraged him to get close to 21-year-old Wally Fisher, whom they believed to be a highly active street distributor for Barnes. According to Breitbart’s opening state­ment, however, Wally Fisher was employed as a simple car-washer until Geronimo came along and duped him into entering a scheme to sell “street garbage to the government for top dollar.” The defense is trying to show that Wally Fisher and Geronimo did buy large amounts of low quality dope with money supplied by a DEA agent posing as Geronimo’s cousin from California. According to the defense, the DEA had paid Geronimo $25,000 to get Barnes, so he simply made up a story that the heroin came from Nicky’s people.

When the cross examination started and Breitbart got first crack at Geronimo, the other lawyers were patently envious. Geronimo looks a lot like Tony Orlando but hasn’t had the same kind of luck with his recordings. Of the 60 tapes he made during the seven-month investigation, only one is alleged to contain direct discourse with Nicky Barnes. (Geronimo had at least one other wired meeting with Barnes; the tape came out blank. Breitbart showed that this couldn’t have happened unless someone deliberately unscrewed the microphone wire from the little Nagra strapped to Geronimo’s waist.) Breitbart challenged Geronimo to produce a single tape he’d made of Barnes’s voice; the next morning the government produced a tape Geronimo had made at Bubba Jean’s Emporium, using a microphone concealed in a cane and a transmitter in a plaster ankle cast. It was a tape they hadn’t introduced during the direct examination of Geronimo. When played, it turned out to contain mostly inaudible voices submerged beneath the din of Bubba Jean’s jukebox. “That’s Barnes,” said Geronimo. “I have no more questions,” said Breitbart.

Breitbart also forced the unhappy and increasingly amnesiac Geronimo to admit that during a weekend when, according to his own testimony, he had been in Baltimore buying “angel dust” for the government, he had, in fact, been living it up with Wally Fisher and their respective bimbos at the Sheraton Pocano.

In his opening statement, Breitbart promised he would prove that “as Geronimo lay fornicating… with another woman, his wife was dying of asthma induced from drugs that he supplied; and that he brought the other woman to the wake and laughed about it.” As it turned out, he didn’t try to elicit any such testimony. But then, it was difficult to get anything out of the witness who took a full minute to answer when Breitbart asked him how old he’d been in 1973.

The government’s next big witness is named Promise Bruce. Fiske forthrightly informed the jury in his opening statement that Promise Bruce is a convicted drug dealer and murderer who has, in the past, supplied false information to the DEA. Next to him, Geronimo should look like a sweetheart. 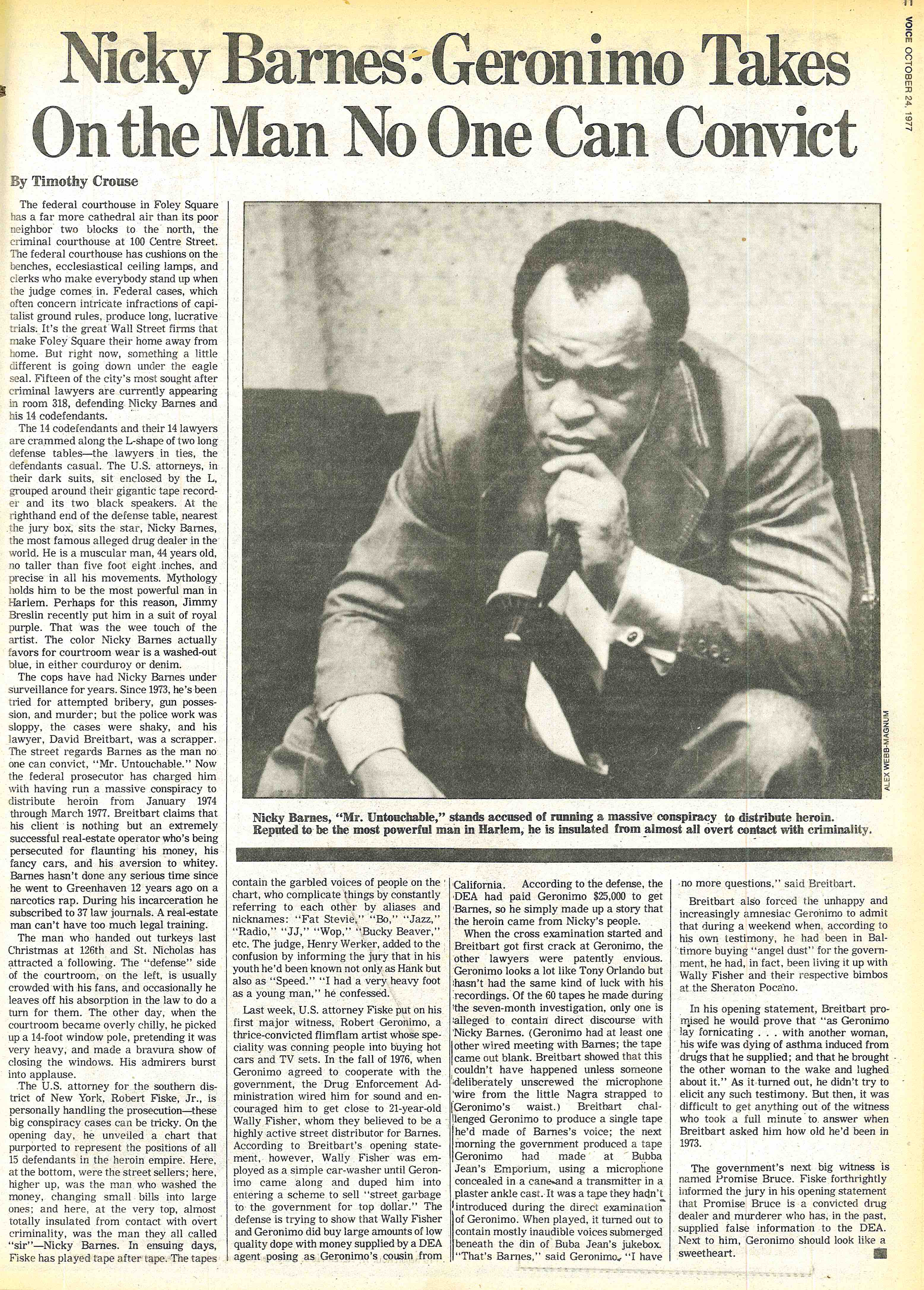