Actor Danny Aiello has the no-bullshit affabil­ity of someone just off the street. And here, in a West Hollywood hotel called Ledufy, where Parisienne-sounding operators answer the phone “Oui, mademoiselle,” he seems a home­-boy who has wandered onto the wrong turf. Aiello is ensconced in Los Angeles to shoot Eddie Murphy’s $40 million picture Harlem Nights, a far cry in both budget and bankability from Spike Lee’s $5 million Do the Right Thing, which gave Aiello a coveted lead role as Sal, the entrenched and ultimately embattled owner of a Bedford-Stuyvesant pizzeria.

At 50, Aiello is tall and tattooed, with a solid build but enough of a gut and gold to suggest a paisan who has done well for himself. He remains a quintessential actor from New York — not as city, but as neighbor­hood. Directors have cast him accordingly: the aging mama’s boy in Moonstruck, the abusive Depression­-era husband in The Purple Rose of Cairo, and the bad cop in Fort Apache, the Bronx, set in the 41st precinct of the South Bronx where Aiello grew up a self-de­scribed “skinny, tough kid with a lot of heart.”

Aiello was the sixth of seven kids born to a de facto single mother and an absentee father “who came home once a year to make a baby, and then he’d be gone.” At the age of 16, Aiello married a local Jewish girl from the neighborhood and began a three-year stint in the service. While still in his twenties, he parlayed a job as a starter for the Greyhound bus line into the presiden­cy of Amalgamated Transit Union Local 1202, making him the youngest union president at that time. Ousted after a 1967 wildcat strike, Aiello, then a father of four, went for five years working odd jobs, variously a bouncer and part-time master of ceremonies in after­-hours clubs around the city. He turned to acting at the age of 35.

Aiello’s working-class roots are crucial to his effec­tiveness in the role of Sal: Director Lee was certainly tapping elements of character far deeper than casting for type. The two couldn’t be stranger bedfellows: Lee, who directed commercials for Jesse Jackson, endows his films with motifs of black struggle; Aiello is the type of postwar working-class hero that put Ronald Reagan in office. Name an issue and the two are likely to be on opposite sides, from Jimmy the Greek’s gaffe about black athletes (Aiello: “It’s a dumb thing to say, but he should lose his job over that? Come on.”) to racial killings. (“You look at Howard Beach, Eleanor Bumpurs. Then you look at a white woman running in Central Park, and I understand that one black kid said, ‘Let’s get the white bitch.’ I mean, is that racial? We heard a racial remark made; should we judge them on race? I don’t know. Now someone in Howard Beach said, ‘Let’s get the black bastard.’ Does that make it racial? I don’t know.”) 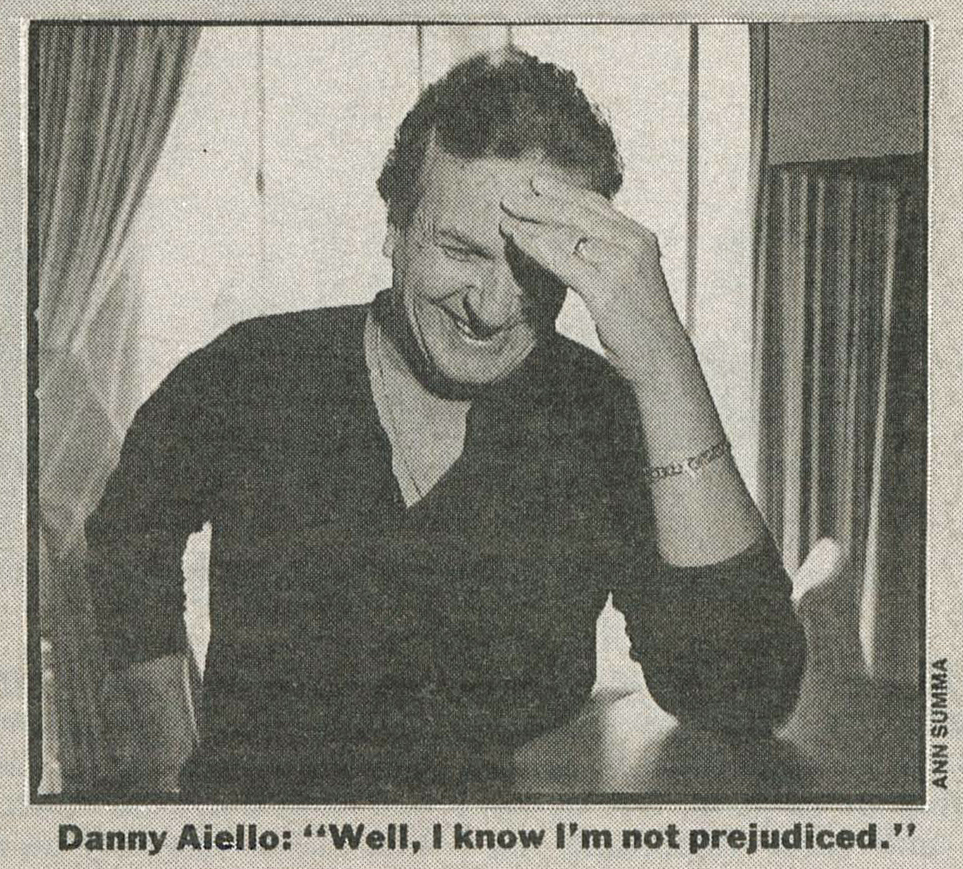 Aiello himself embodies the perplexity of racial atti­tudes on a street level: the street being the place that erupted into the Howard Beach incident, and, in the movie, the place that erupts into the racially charged blow-out between Sal and Radio Raheem, where pizza and ghetto blasters say more about the day-to-day schism between black and white than any sociopolitical analysis could. For Aiello, words are a part of street culture he readily admits to participating in — “playing the dozens” as kids in the Bronx, cursing each other with whatever will hurt, whether it’s your mother or your race. He explains, “If a black man called me a guinea, that was the biggest insult you could give me­ — or a dago. I wanted to fight. And if I called a black man a nigger or something like that, he would want to fight. It wasn’t because you hated every person or you were racist. It was the thing that provoked people to fight. It’s like, put this chip on my shoulder and you throw it off… Now you’ve got people running around, some sort of psychologist or psychiatrist saying that if you say a word like that, you’re prejudiced. Well, I know I’m not prejudiced. If I was, I wouldn’t sit down with Spike Lee.”

Lee understands Aiello’s culture. Do the Right Thing explores, in a profoundly honest way, the range of individual and collective experience and emotion that lies behind a racial slur. Lee knows the difference between racism and prejudice: No nationality is inno­cent of bigotry, but in America today, white prejudice combined with economic and political power equals racism. He also knows that to a working guy like Sal, who has busted his behind for years just to scrape by, that distinction is an elusive one. 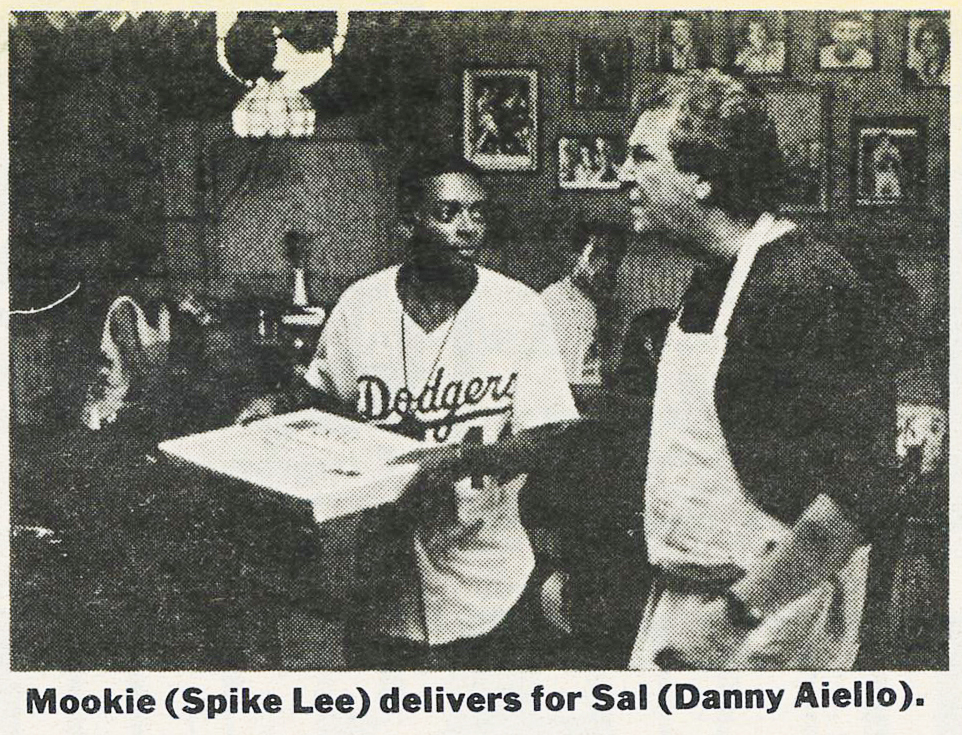 Aiello interprets the movie not as a movie about racism, but one that shows how meaningless a racial slur, and the attendant hoopla over it, can be. To him, like Sal, racial slurs are only words — deeds make the man. So, despite Louis Farrakhan’s views on politics and race, Aiello feels deep respect for the Fruit of Islam, which provided security on the movie’s set in Bed-Stuy: “I don’t think I’ve ever seen, individually or collectively, a group of people who are so polite, so clear-eyed, so full of knowledge as to what they were there for, and they were there to make sure that the movie would be made with no problems.”

Aiello’s views are enough to make most Hollywood liberals shudder, but he may well be one of the last honest men in the public eye. In conceptualizing his role of Sal, he explains: “I kept saying I don’t want my character to be lily-white every minute. I don’t want to be right every minute. I want them to have frailties. I want him to make mistakes. I want him to say ‘nigger.’ I want him to do that, and then at the end when they interview me and they say to me, ‘Are you prejudiced?’ I’m going to say, ‘I use those words in life.’ Spike knows that, and I said, ‘Look, if I told you I didn’t use that word before, Spike, I’d be a liar. But I’m not prejudiced, Spike, and I use the word.’ And I use words worse than those pertaining to race. But I’m not, I live and let live… If people are prejudiced, fuck ’em.” 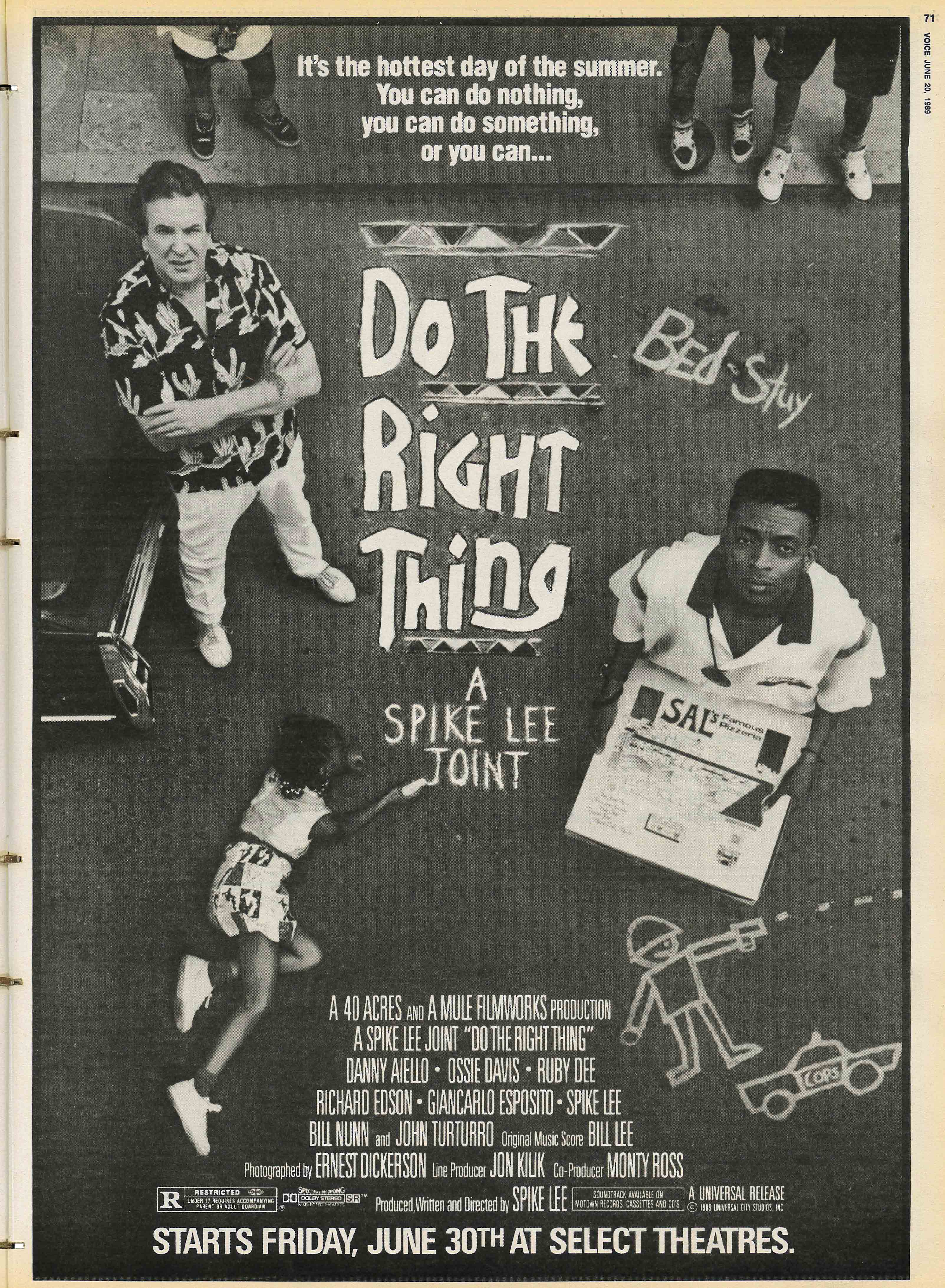 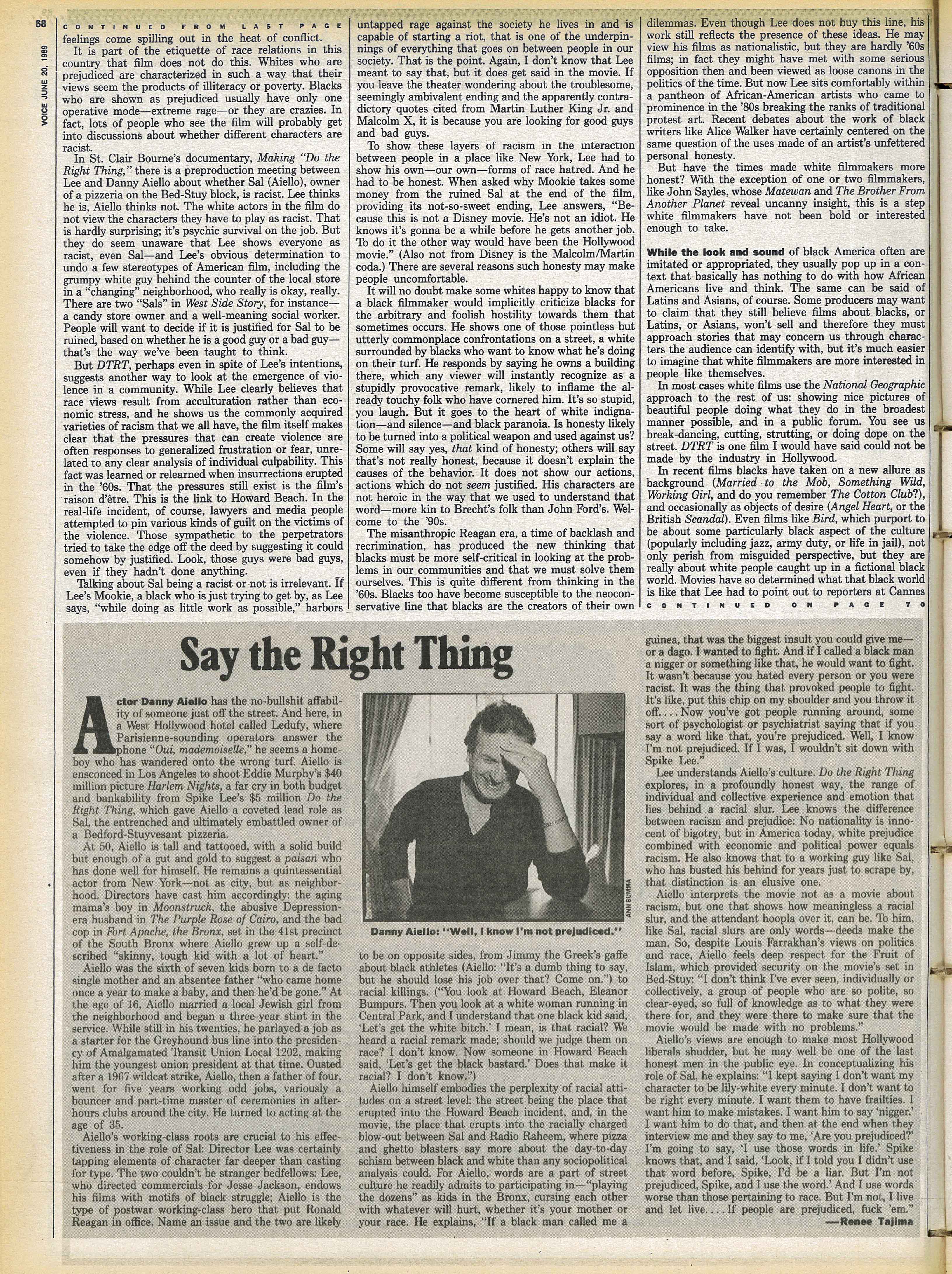