By last Sunday afternoon, things were following what I have become accustomed to thinking of as normal patterns. The news bulletin an­nouncing the Nixon pardon, the outraged public response, the television specials on what it meant — all eclipsed Evel Knievel’s great con dive into the river (where would you rather land a rocket — in the water or on a rock?), the news of testimony by the director of the CIA that we were involved in those events which led to machine gun bullets that (with utter finality and no mercy) removed President Allende from office, and the fact that it was a beautiful day — the first good one all week.

Mr. Gerald Ford, by one act during which he proclaimed “the fate of Richard Nixon… deeply troubles every decent and compassionate person,” had put things to right in my head again. I am back to seeing my President clear — this time as a horse’s ass.

While Mr. Ford felt he was finally putting Watergate matters to rest, I had, until then, actually been more or less at rest about them. Only three things had continued to bother me:

1. that John Dean who had followed his father’s sensible advice (“John, when you’re cornered, tell the truth”) seemed to have gained no benefit from singing — this de­stroying the time-honored tradition of getting rewarded for being the first canary;

2. that Nixon was being treated like a President Emeritus and was protected, deferred to, and financially supported by my government;

3. that William Safire remained on the op-ed page of the Times as an embarrassing left-over from the Nixon-Agnew years when the press was at bay and the Times hired him to be, as it turned out, spokesman for unimprisoned felons of high rank. Or as a publisher I know said last week, “Every time I see Safire’s name on that page I see blackmail.”

Now, however, Mr. Ford has created a situation in which we are again in the thick of Watergate. It is probably true that Ford pardoned Nixon out of compassion — but it is the selectivity of his compassion that tells where he stands. Not so much President of all the people as Presi­dent of all the Presidents. The only defensible justification for this par­don would be if Mr. Nixon were insane, and unable to stand trial. And this is a whole other kettle of fish.

There have been hints and allusions to Nixon’s precarious emotional balance over the last year. Ford even ad-libbed such an allusion when he mentioned Nixon’s health as one of the reasons for the pardon. Some of us have thought Nixon was always crazy — in a kind of borderline psy­chotic way of perpetually misperceiving reality. Clearly, however, in the last year, he was sometimes over the edge. One must assume his decisions were often made while not quite of sound mind.

That the system of checks and balances works only by accident is exemplified by the fact that while the Secretary of Defense was so unsure of Nixon’s sanity that he hung around Washington to protect the integrity of the button, no one was able to make a move to have Nixon removed from office precisely be­cause of mental unfitness.

Now, if Nixon was crazy during this past year, his selection of Gerald Ford as Vice-President was the act of an irrational man. The Congress, at that time, would have confirmed almost anyone who was born in America and who was not likely to be indicted before the bicentennial. So my present President was chosen by a man who had not only committed countless criminal acts while in office, but was possibly also insane. Further, if you consider that the Nixon mob’s illegal campaign practices, which left the Democratic Party in such disarray, probably created a technically fraudulent election — then my present President was chosen by a man who was not even, in the purest legal sense, entitled to hold office.

Still further, when this President (who has come to office in the nut­tiest way imaginable) then chooses the man who will be my next Vice-­President, one wonders how much further from direct election of our leaders we could go.

In any case, we have watched Mr. Ford move, over the past weeks, from a posture of humble awareness that he is not an elected President to a dawning sense of himself as a force and not an object of history. His pardoning of Nixon without any real explanation (given the circumstances of Ford’s ascension to power) appears to be an unseemly and arrogant act which, for the first time, gives every criminal the right to feel put upon.

If Mr. Nixon is insane and was pardoned because of it, Mr. Ford should have told us this, straight out. We could then look at what has gone on from a different perspective, deliberate on exactly what kind of mandate Mr. Ford has, and also take steps to insure that the situation of a man turned lunatic in the White House could be quickly altered should it ever happen again. If Nixon is unbalanced, the long constitutional process of impeachment was in­appropriate. If he is sane, why has he been pardoned?

On that Sunday morning, shortly before the pardon was announced, Nixon finally left San Clemente to play golf with Walter Annenberg­ — more like a fugitive who has been on the lam but who now can see the sun than like a gibbering object of pity. The Godfather goes free. His son-in-­law suggests he is a national resource and should run for the Senate. Swifty Lazar announces that he is Nixon’s literary representative, and that Nixon will write an honest book all by himself. Crazy like a fox they used to say. I don’t know. Is anyone going to get John Dean out of jail? 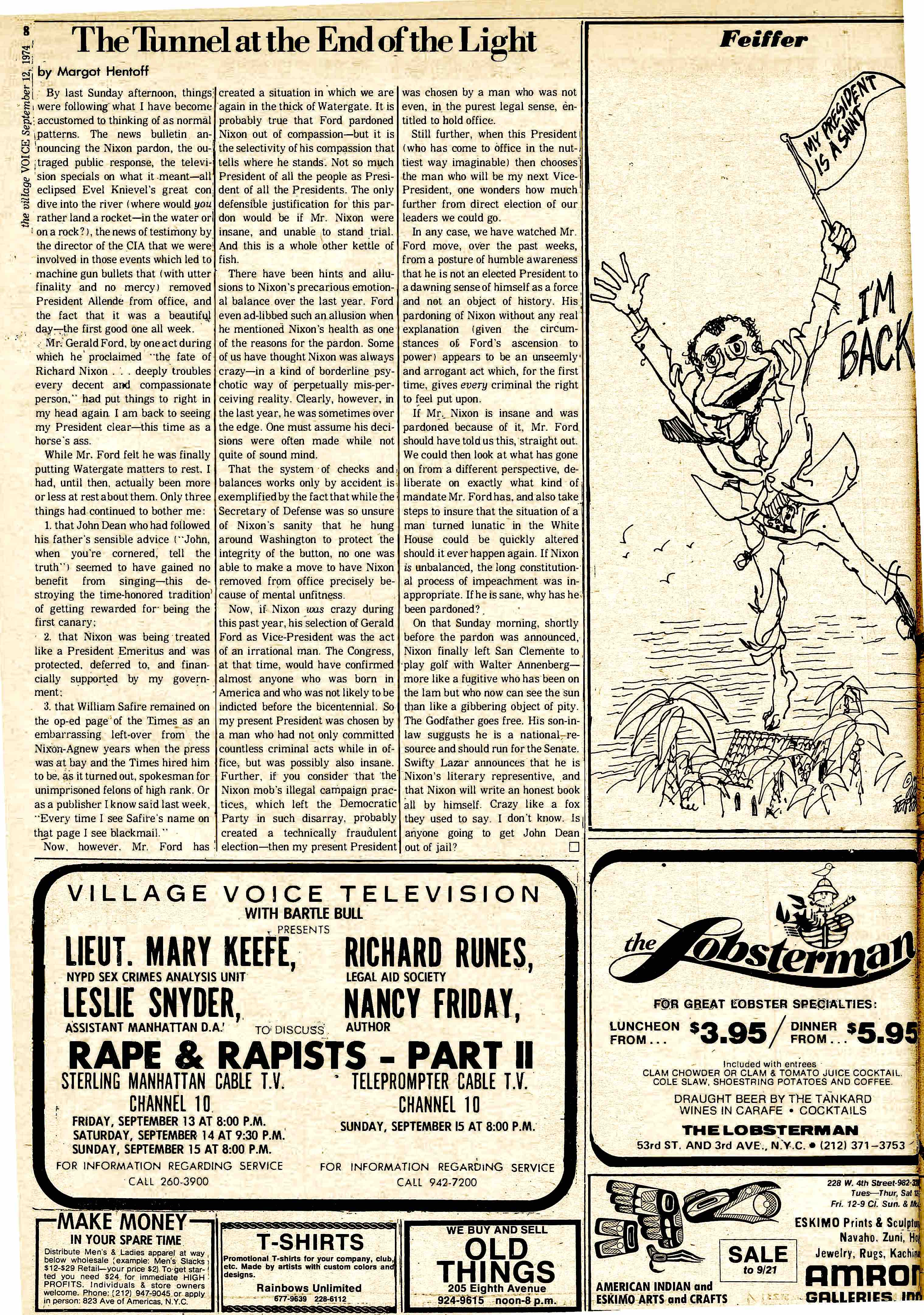