DANIEL JOHNSTON’S wavering voice gives even the most casual listener the creeps. Listening to his nine cassette and three album releases, Robert Johnson, Roky Erickson, Jonathan Richman, and Neil Young come to mind. Johnston has a painful sincerity that obliterates the distinction between performance and life, that grips and repels, that threatens to collapse on itself. His story has been a series of fuck-ups, small and tragic. At 29, living at home under close supervision, he acknowledges what he has done: “I’m really very, very sorry that happened. I know it’s gonna follow me for the rest of my life.”

In August 1988, Johnston had finished recording Jad Fair/Daniel Johnston in Fair’s living room in Union Town, Maryland, and was heading home. According to legal documents, his manager, and Johnston himself, he got off the bus in Chester, West Virginia, near New Cumberland, his hometown. But Johnston did not go home. Instead, he spent the night wandering around, apparently in a manic state. He had not been taking his medication. At 7 a.m., on the 26th, he found himself in front of an apartment building, where he began making a lot of noise. A 68-year-old woman came to her second-floor window and told Johnston to shut up. Daniel says he was positive that Satan had possessed her, and he felt a duty to help her. He entered the building, climbed the stairs, and, as the grand jury charges put it, “committed the offense of ‘Burglary’ by kicking and forcing open the entrance door of the dwelling house.” Terrified, the woman jumped out of the window, breaking both of her legs.

“I never wanted to hurt anybody,” Johnston says. The Hancock County Court apparently agreed, and after a seven-month stay in a state hospital the singer was released in the custody of his parents.

JOHNSTON IS A religious outsider, and to him the devil is as real as dirt. His conviction is so powerful that professional music margin walkers as diverse as Maureen Tucker, Texas Instruments, Kramer, the Butthole Surfers, Sonic Youth, Yo La Tengo, and Glass Eye have covered Johnston’s songs or recorded with him. Listening to his music, you can smell the devil’s breath; it makes your spine sweat. Johnston makes you feel that any second evil can come crashing down on your own head. On his most recent album, 1990, he preaches to a CBGB crowd with keening ferocity, “DON’T PLAY CARDS WITH SATAN! HE’LL DEAL YOU AN AWFUL HAND.”

From 1980 to 1985 Johnston recorded hundreds of songs by himself, many of which were released and are available on Stress, his manager Jeff Tartakov’s cassette­-only label. Each cassette bore a Johnston art brut drawing — frogs, boxers, people with missing skull caps. The tapes’ lo-fi sound is so cruddy that the Radio Shack machine Johnston used becomes an instrument in itself, an ever-present rumble. With his nephew’s chord organ­ — “a little kid’s instrument; it’s a little electric keyboard, like half a keyboard, with a little fan in it… and little buttons you press for chords, y’know?” — and a voice so unsteady it might have given Alfalfa the shakes, Johnston stayed in his folk’s basement for days, for years.

He works that organ with frenzied syncopation, one hand playing the melodies, the other pounding chord keys for a percussive effect that sounds like a marching army. Johnston also plays guitar, awkwardly. On the ’83 cassette Yip/Jump Music (20 songs, released as a double LP last year by Homestead), he only uses the guitar on one cut, “Sorry Entertainer.” His atonal pluckings reinforce the lonely, eerie mood of his voice. “I heard the Beatles when I was 19 and was disappointed when I found out I couldn’t sing just like them. So I didn’t know what to do for awhile. Then my friend turned me on to Bob Dylan, and I said, ‘Yeah, I can sing like this guy.’ ” Sometimes he sings a cappella, as on Yip/Jump‘s “King Kong,” a mourning sexual psychodrama about Johnston’s favorite movie.

His songwriting pumps blood back into the deadest clichés. He sings about the splendor of the mountains that God created (“God”), the enduring beauty of love (“Love Defined”), the pain of a broken heart (“I Remember Painfully”), or how great the Beatles are (“The Beatles” — “I always wanted to be like him/But he died”). Coming from most anyone else, these sentiments would be sappy, but in Johnston’s voice they offer, to use a line only he could get away with, glimpses of the naked soul. His stories of (terrible!) angst and (immense!) love are so believable because in Johnston’s world, agony and ecstasy intertwine. Not to say that he can’t distinguish between the two, but they elicit the same feeling. Love always leads to despair, and in despair he’s conscious of nothing but love. Johnston is a bluesman.

Yip/Jump Music is Johnston’s most uplifting work, his purest pop expression, recorded during his most fertile period so far. He followed it in ’83 with the densely crafted Hi, How Are You. With songs like “Despair Came Knocking” and “Poor You,” Hi is even more haunting than his first releases, Songs of Pain (’80) and More Songs of Pain (’81). As the fanzine Your Flesh put [it] in a favorable Hi, How Are You review, “It’s damned hard not to feel like a voyeur listening to this album. I mean, there’s absolutely no attempt on Daniel’s part to be discreet or private or embarrassed.”

Yip/Jump Music is the best introduction to Daniel Johnston, because there is very little vanity in the music. It’s the soundtrack of Johnston discovering the depth and power of his emotions. Later things would get more complicated when he got an audience. When he became “famous” (an appearance on MTV, Rolling Stone and Spin articles), his delicate reality instruments took a beating. For one thing, the attention inflated his ego, which aggravated his problems. 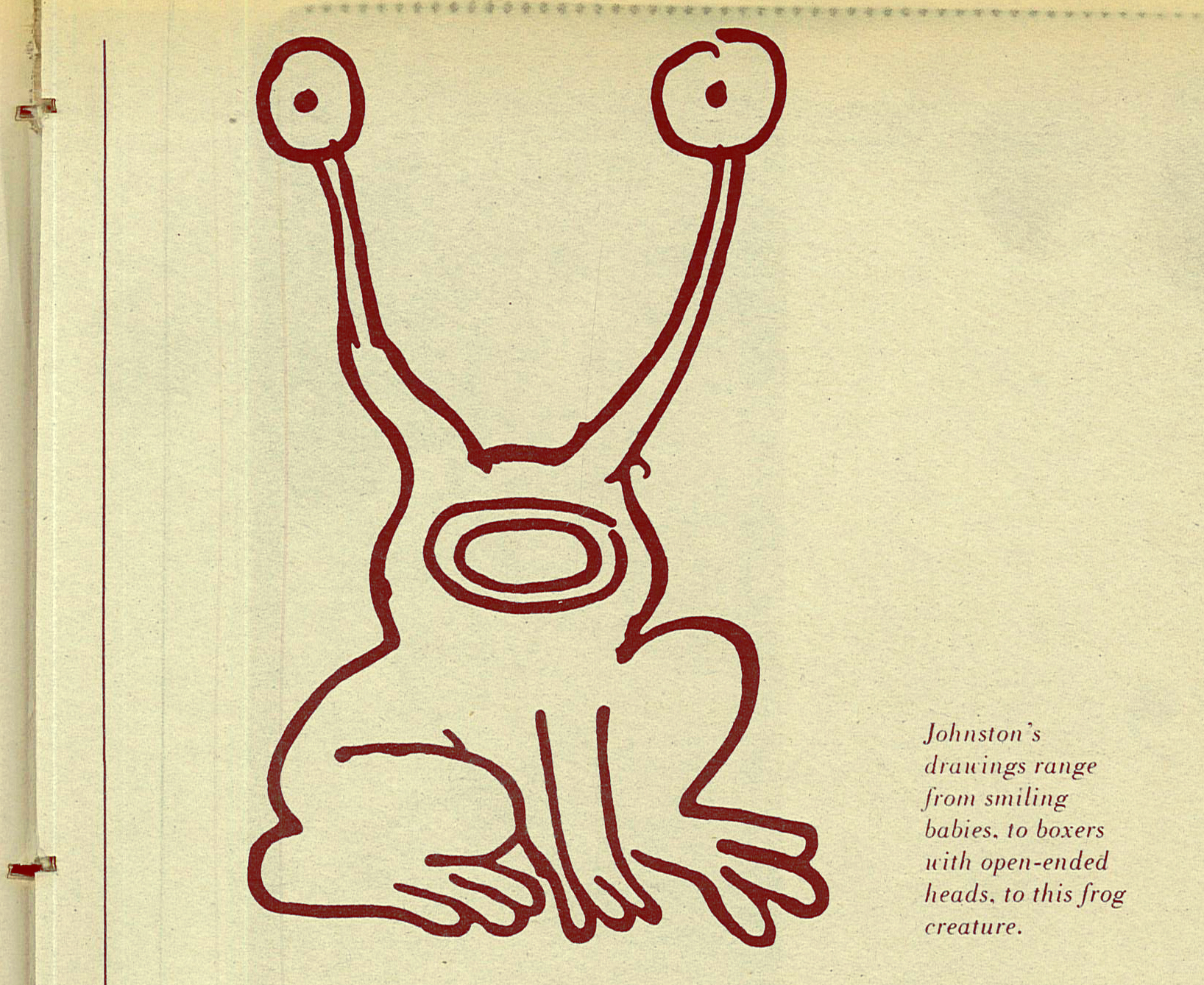 The most recent release is 1990, and it’s a drastic departure from the midget-in-a-tin­can sound of the earlier tapes. The album was recorded during his visit to Manhattan in April 1988, before his collaboration with Jad Fair. That’s when Johnston got to meet some of his fans, crashing here and there, including a stay with Sonic Youth drummer Steve Shelley. (Shelley and Lee Ranaldo trance out acoustically on “Spirit World Rising.”) The 11th and last 1990 song, “Funeral Home,” an adaption of Bruce Springsteen’s “Cadillac Ranch,” was performed live at the Hoboken record shop Pier Platters. You can follow along as the in-store crowd goes from stunned silence to a rousing sing-along:

Though Johnston suffered a breakdown during the recording — Bellevue one night, CBGB the next — 1990 is among his most coherent albums. Kramer produced and re­corded it with an unusually light and subtle hand coming from the Shimmy-Disc/Noise New York mogul. Johnston’s voice has nev­er sounded steadier, more sure of itself — ­even during the two CBGB tracks. But the biggest difference is in the dominant subject matter: Satan.

THE LATEST NEWS from Daniel Johnston has been quite mixed. One of his goals for the new year was to write 2000 songs, but finding himself way ahead of schedule, he changed it to 1000 albums. An L.A. gallery is planning his first art show, and in March, he performed live for the first time in two years, traveling with his father to the South by Southwest Music Convention in Austin.

In February, he appeared on Nick Hill’s Live Music Faucet show on WFMU, via the telephone. With an intricate setup of backing tapes, vocal mikes, and the live studio accompaniment of Yo La Tengo for three songs, Johnston presented his own radio show. For much of it, he had recorded his own piano and backing vocal accompaniment and, all of it being picked up by his phone, shouted out 1990 cuts. The performance was pretty good at first, though it was hard to tell how much of Johnston’s self-aggrandizement was in jest. (“Ladies and gentlemen, tonight it’s the King Kong of show business…”) As manic as ever, the sorry entertainer ended the segment by accusing Tartakov of ripping him off, embellishing the attack with bizarre anti-Semitic insults.

Tartakov, a model of patience — “Daniel is currently as lucid as ever” — later received an apology from the singer. Johnston lamented, “I’m always making stupid mistakes like that.” 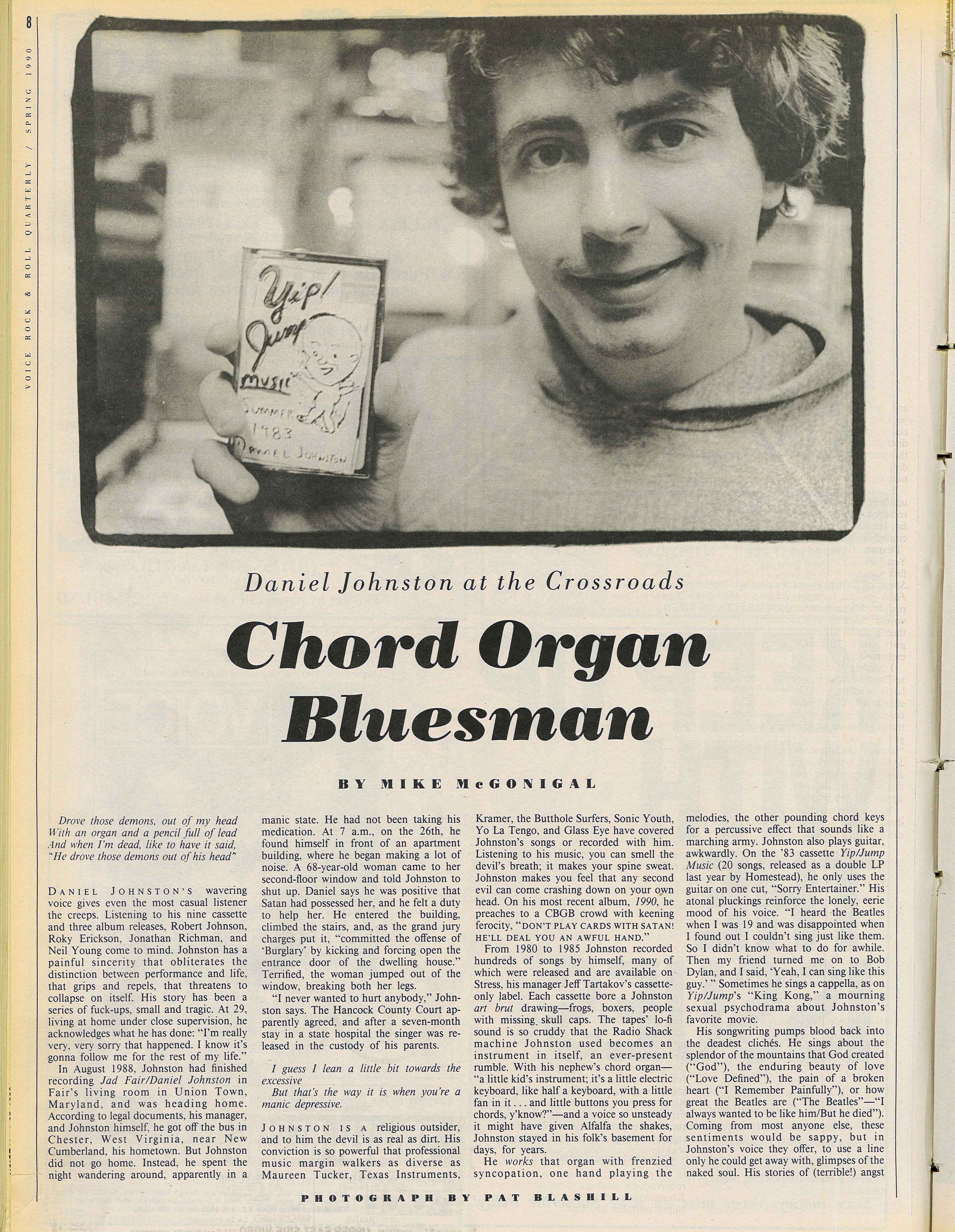 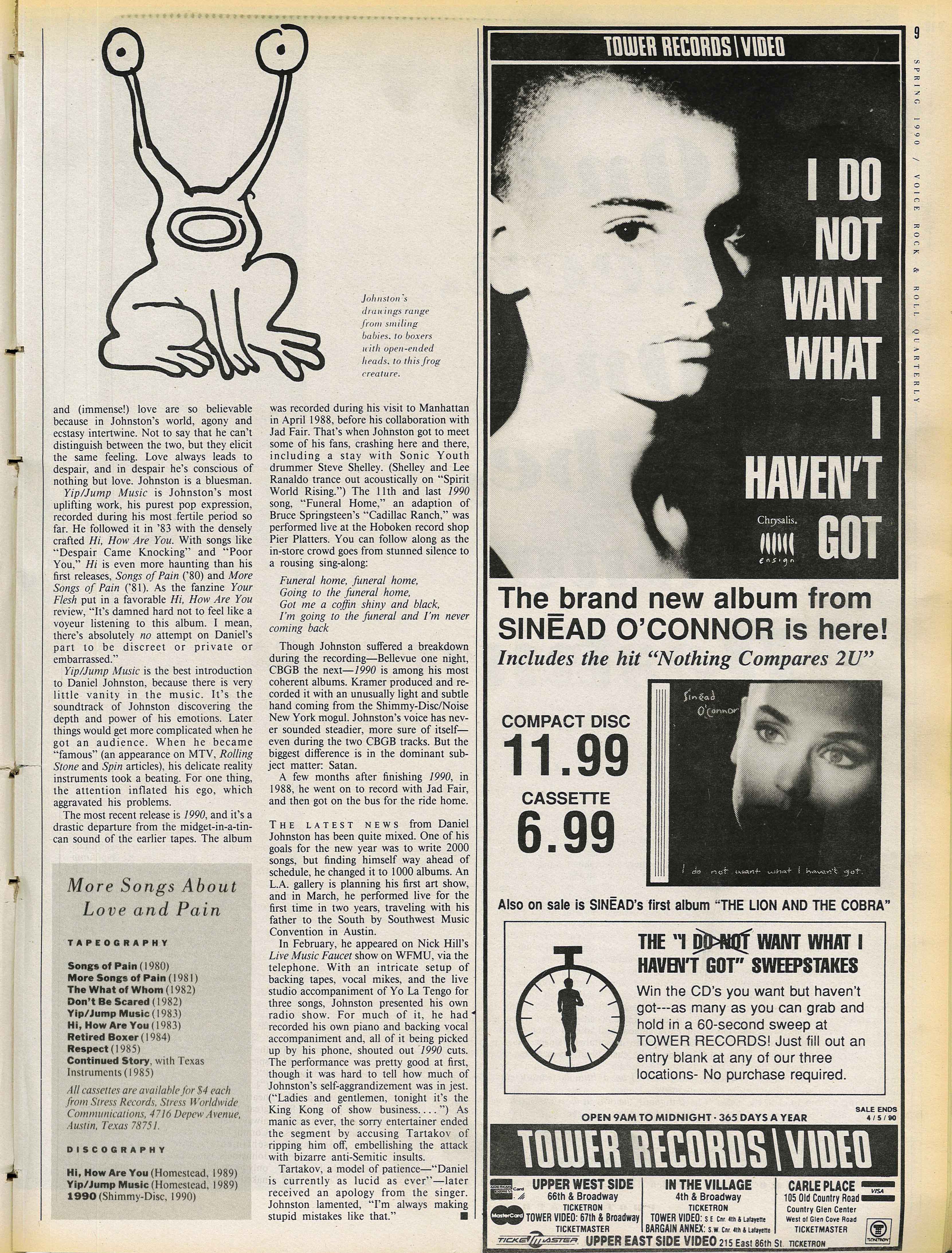