A film title: “Cocksucker Blues.” It is 1972; we are with the Rolling Stones, in a big house somewhere in the hills around Los Angeles. Mick is lying on a bed. The camera pans down to his waist, and he begins to massage his crotch, in a slow, circular motion. He opens his pants and puts his hand inside. He moves it more deliberately and the camera comes in tight. 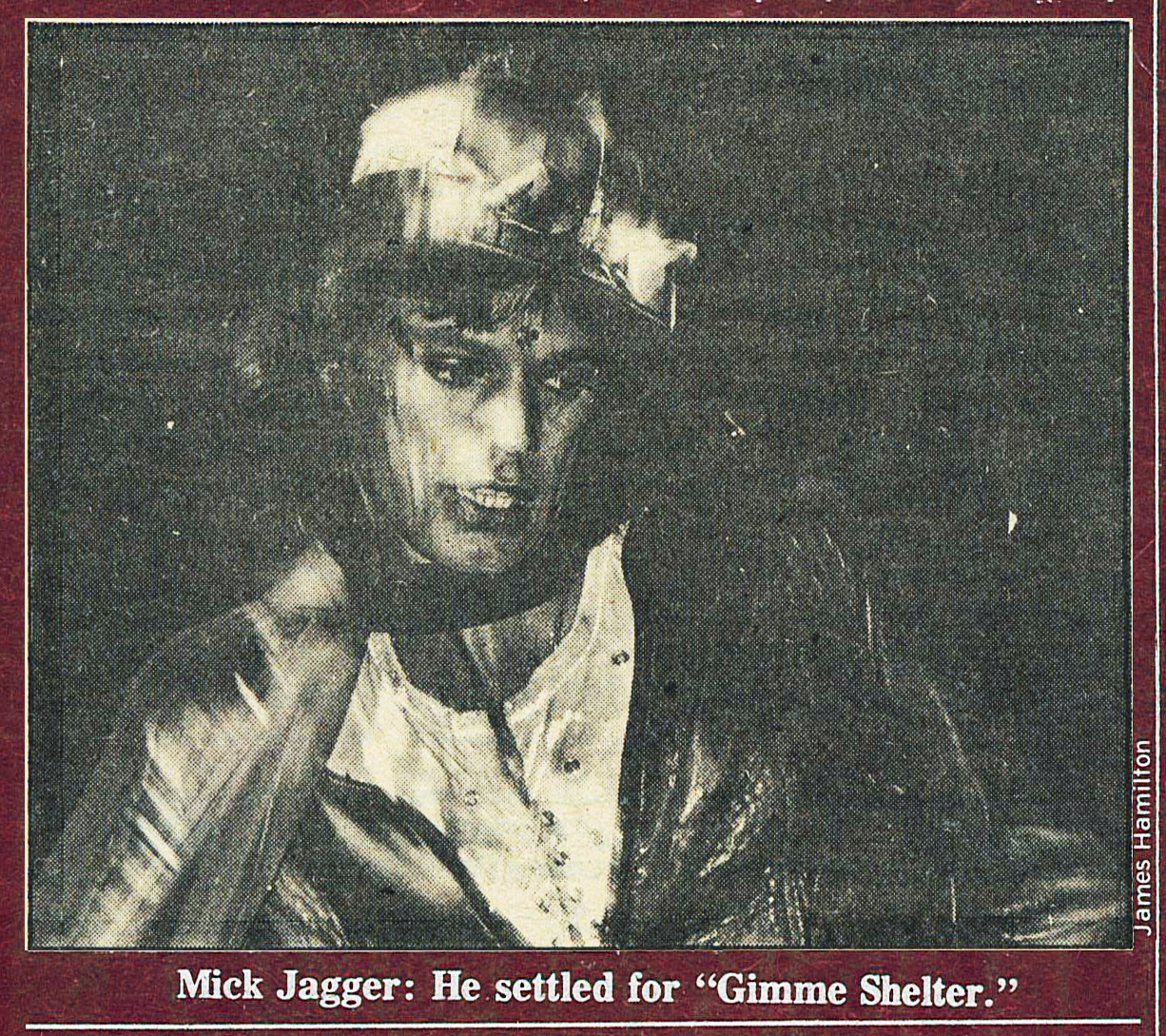 Keith Richards is standing up at a piano, playing a lovely gospel-blues. The camera cuts away; the music continues on the sound track. Keith reappears, and shifts to boogie-woogie with such perfect syncopation the frame seems to shake in time. Mick appears in Keith’s place, working out a ballad, note by note.

It is some song. Very hesitant, sung high and lonesome, more like “No Expectations” than any other Stones tune, and more like Hank Williams than that, the music has the ragged edge Mick gives to everything good he does. “Well, I wait in Leicester Square…/I was only talkin, to the light…” Then hard, angry: “Where can I get my cock sucked?/Where can I get my ass fucked?” And then very quietly again: “Well, I ain’t got no money but I/Know where to put it, every time.”

It’s beautiful. And it throws you, off, completely.

That is the opening of the legendary “Cocksucker Blues,” a three-year-old film by Robert Frank, the great photographer who came to the United States from Switzerland in 1947, and, after publishing his historic collection, “The Americans,” in 1959, gave up his first trade to make movies. Much of the cover art for “Exile on Main Street” was taken from “The Americans” and from Frank’s second book, “The Lines of My Hand.” Working with Danny Seymour, Frank then toured the country with the Stones in 1972 to make a film. But “Cocksucker Blues” has become a legend not simply because of its title, or be­cause it is about the Stones, or because (save for the Stones’ collaboration with Jean Luc Goddard in “One Plus One”) no rock and roll group has ever made a movie with an artist of Frank’s stature. “Cocksucker Blues” has become a legend because it has never been shown.

It was never shown because the Rolling Stones, who own it, don’t want it shown. The rumors why have been simple: Frank, it has been said, shot the Stones fucking groupies and shooting heroin. Prefacing his film with the disclaimer, “except for musical numbers, all events depicted herein are fictitious, and any resemblance…” and closing it with a cast listing (“Junky played by…”), Frank shot some Stones associates and hangers-on doing both, but not the Stones. That would, to most, make the Stones guilty by association anyway; it would also keep a good part of the Stones audience barred from the theaters. But Frank does not feel this is precisely why the Stones have locked his movie up.

Jagger thinks the film is a downer; that it does not celebrate the Stones, nor show that they are the greatest rock and roll band in the world (as “Gimme Shelter,” for all of its horrors, pointedly did); that it would not bring fans shouting to their feet nor send them into the street shaking their heads in awe, which is clearly what a film about the Rolling Stones ought to do. Especially after Altamont. So Frank’s 16-mm foot­age, some in color, some in black and white, and his harsh, biting, mono sound mix, were replaced — by “Ladies and Gentleman, the Rolling Stones,” a straight concert document with brilliant quadraphonic sound, a film that failed to get the Stones across nonetheless. Frank made his movie anyway, and last Wednesday he drove to Berkeley and showed it for the first and possibly last time.

Tom Luddy, director of the Pacific Film Archive, the most resourceful and wide-ranging outlet for movies in the country, and his friend Jean­-Pierre Gorin, talked Frank into ad­ding the picture, unannounced, to a bill of two rock performance flicks. Frank made no money from the 900 people, mostly Berkeley students, who had shown up to see Cream’s “Farewell Concert” and “Mad Dogs & Englishman.” Frank arrived with his print following two hours of Cream, was introduced, and spoke briefly. “I made this film with the Rolling Stones in 1972,” he said. “It seems like 200 years ago. It was very difficult to make. I like it. I’m happy to show it, even if it isn’t completely… legal.” He laughed, the crowd laughed with him, and everyone settled down.

Once past the opening sequence, the movie settled down as well. Nothing really happened; the occa­sional memorable events and images had no context. The movie was seamless, and it convinced you that the tour it was tracking had no more shape than the movie. Frank did not judge, make points, conde­scend, sensationalize, or “human­ize.” He did not play for jokes, or horror either.

The crowd’s reaction was proof Jagger was right about the movie as far as he went. Almost any given close-up of Clapton or Ginger Baker in the execrably filmed and recorded Cream movie brought more conventional rock fan response than all but a few bits of “Cocksucker Blues.” Save for a stunning montage of Jag­ger in “Midnight Rambler,” shot in dark reds and edited in time with the song from footage shot at several different concerts, and the irresist­ible excitement of Mick and Stevie Wonder dueting on “Satisfaction,” the live music was brief and not too frequent. The sex footage, which included a nude couple humping in the aisle of a plane as the Stones, shaking maracas and tambourines, egged them on, was never erotic; it was, like most of what took place in the film, dispirited and forced, a matter of some people going through the motions.

And it was a sense of the Rolling Stones going through the motions that I took away from the film — that and a few outbreaks of life. In “Cocksucker Blues” one sees the Stones working hard, the way labor­ers and panicky businessmen work hard, but you never see them take any pleasure or satisfaction from their work, nor see them feeling out their genius and their unity as you did in “One Plus One.” You see the Stones, and everyone else, at play, if that’s the word: mugging for the cameras, trying out Frank’s gear. There is a fine shot of Jagger returning the salute of a TV recruiting sergeant. But except for a brief respite in a black pool hall somewhere in the South, no one seems to be having any fun. “Ah, to get away from all those people,” Mick had moaned a short time before, as the Stones, crowded with Bianca and Frank into two station wagons, headed down a two-lane highway, Mick telling tales of southern cooking as the cars passed a prison, and an arm reached out from a barred window, two fingers raised in a V the Stones might have seen, and might not have.

The most appalling scene of the film is not the woman shooting up; not the girl outside Winterland San Francisco dully stating to the camera that she has no ticket, that if she doesn’t get one she’ll jump off the bridge, that her baby has been taken by the state because she was on acid and what’s wrong with a mother on acid who loves her baby for Christ’s sake the kid was born on acid — the worst scene is backstage in New York as, in color, Truman, Andy, Lee, and their troupe make their entrance, trying and easily succeeding in showing that they are far less interested in the “Rolling Stones” than in each other, and then Mick, in black and white now, running for his dressing room, raging, looking sick, yelling “Fuck you!” as a photographer pursues him, and then slumping down, cursing, “Bloody bunch of voyeurs!”

And from there I thought back to the pool hall: Charlie, shooting with a man who looked just like Muddy Waters; Mick, fooling with a pal, dropping a whiskey bottle, looking down anxiously, hearing a voice say, “That’s Southern whiskey, it don’t break easy,” and liking what he heard.

This is the only time in the movie that Robert Frank and the Rolling Stones in any way connect. 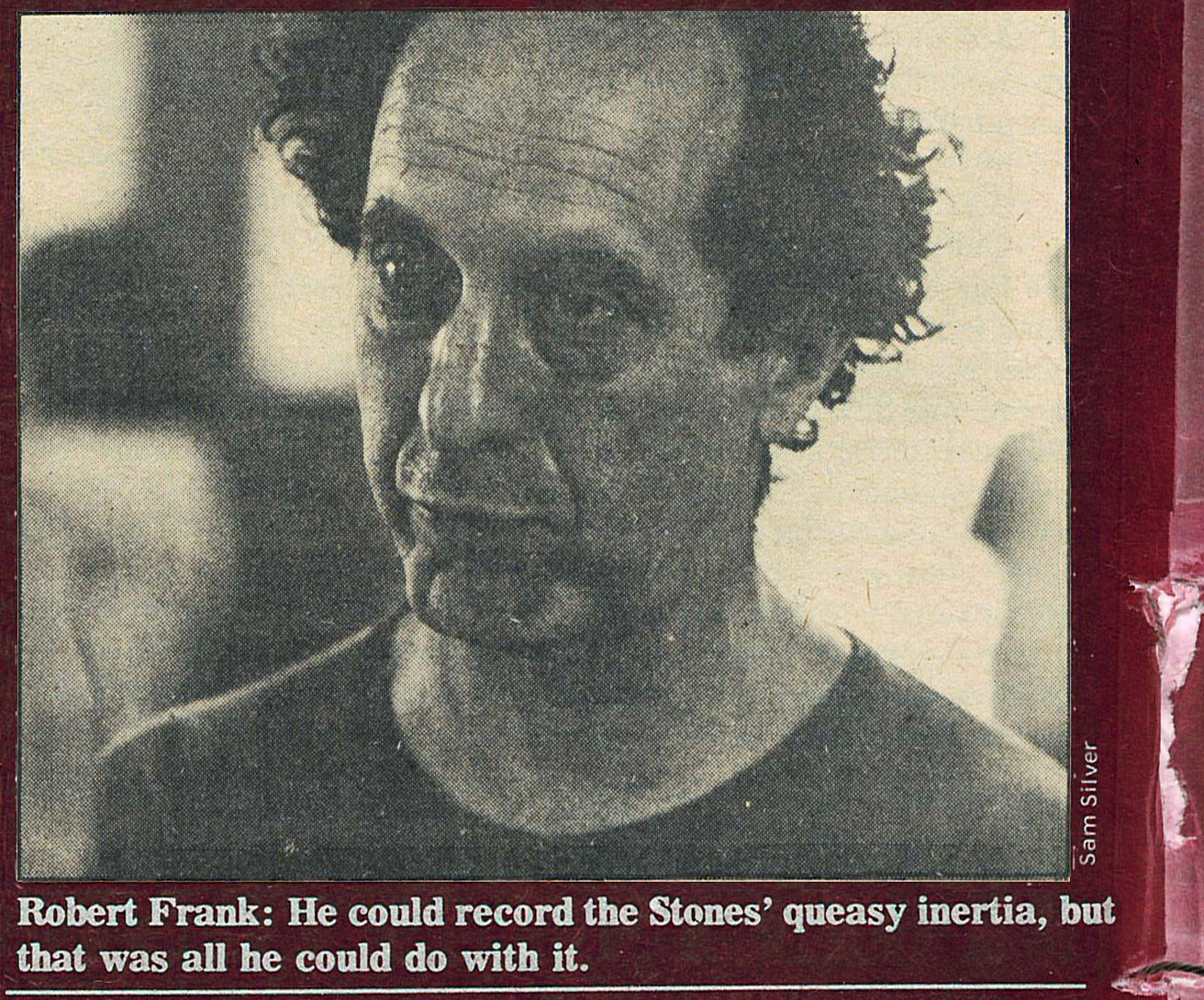 Frank’s deepest pictures are of men and women doing what they know how to do best, what they are most at home doing: attending a funeral, standing over a body on the road, waiting in a car pulled over to the side of the highway, picking out a song on a jukebox. They are pictures of people in tune with themselves and their world with the kind of solidity that implies that a profound choice about life has been made, or that there is no choice at all. It is this duality that makes Frank’s pictures at once beautiful and terrifying. They are pictures of men and women coming to terms with fate.

In “Cocksucker Blues,” outside of that quiet, magic pool hall, there is virtually no such thing. “25 years of looking for the right road,” Frank wrote in 1972, but he found on the Stones’ road neither anything that deserved the word fate, nor ever anyone at home. He found only a queasy inertia — the inertia of the frantic movement of the Stones on stage, and the inertia of them sitting in their rooms. That was something Frank could record, but that was all he could do with it.

But there are moments that do have power, and that would matter should this film be seen. Those mo­ments speak for Frank’s genius, and for the Stones’, and for the way in which the Stones and Frank could not connect, because they are two moments when the artists work separately, solely on their own terms. First there is Mick, singing that title song; and then there is, in a way, just one more of Frank’s photographs.

Very early in the movie, in grainy black and white, the screen is filled with the poster of circus freaks Frank shot in the mid-’50s and which was used for the cover of “Exile on Main Street.” The camera pulls back, not merely slowly, but in almost imperceptible slow motion, until we see that the poster is a billboard on Sunset Strip, advertising the Stones’ new album. The picture seems to darken, as if it were a time-lapse photo and night is falling, and the camera pulls back slightly farther until the thick black outline of the car window from which the shot is being made is visible, and the car edges past the billboard, so slowly, until you have forgotten the billboard, and are transfixed by the car itself, which has taken over, and is moving on.