The music of the true American majority is rhythm n’ blues. Whether it’s called rock, soul, funk, blues, salsa, gos­pel, jazz, or reggae, it’s all about the same thing. Black mu­sic. This continuum which embraces such a rich diversity of styles has come to us from across the generations bounded only by one common fact: it came from the slave ship.

It took root in different soils — that ship made several stops, particularly in the Caribbean and South America — but wherever it landed, that musical kernel grew in such a way that it took on attributes of the local cultures while remaining emphatically African. A “new” music was thus created in the western hemisphere, obviously a child of Africa, but also startlingly different from anything the Mother Continent had ever seen. Radically different.

The blues means more than just a song of sorrow — every­one has known sorrow. It’s not a song but an entire musical school of thought; not just about sorrow, but about the entire scope of emotions from the deep, from society’s depths. Made into an Art, by the children of the slave ships. And rhythm, also a musical school of thought, primitive and pro­found in its grasp of the possibilities of the drums, of the beats and the spaces between them.

The music of the Africans in the western hemisphere has made the world dance; it has inspired millions, particularly in very real battles for human liberty; and it has given the United States its only “indigenous” (i.e., post–Native Ameri­can) classical music. That this music has also been a source of great wealth for some, Black people last of all, is well known. It is a point to keep in mind when you think about a second area of exploitation about which much less has been said.

That is the area of the rip-off which la familia has been dis­cussing for generations. Not the economic rip-off; that’s a given. The cultural rip-off, which psychically cuts deeper. That’s the rip-off which tries to extract the sacred funk essence of the music and then passes the sickly distillation off as primo. Not just as a street hustle, mind you; as a way of life. Not just, “Hey, I got some good stuff here,” but “I got the stuff here.” This racist attitude, this fawning over one’s ex­cretion as though it were platinum, permeates all aspects of life having to do with popular music in the States.

Think about it. Think about the history of radio; at least hundreds of movie plots; music criticism, including today’s rock writing; dance criticism; cultural subsidization; musical theatre; university support; record company financing; con­cert booking decisions; all that stuff. All reinforcing and jus­tifying the institutional and personal dogma that “white mu­sic is not only good; it is better” (than Black music).

So Fred Astaire becomes the epitome of tap, while Bojan­gles is an also-ran. Crosby scores but Eckstine can’t get the play. Sophie Tucker wows ’em till the end but Bessie Smith nostalgia follows the grave. Benny Goodman the King of Swing? Seems the Duke and the Count had more on the ball. Mick Jagger’s got soul. Only if you’ve never seen James Brown. Or even Mitch Ryder. The new disco trick is to be white and sound black. Rod Stewart meeting Cher at Dan Hartman’s house to see if Peter Brown is still in with KC. Momento! That was the original disco trick!

R&b is jungle music but rock n’ roll, after a brief period of resistance, is accepted in white society as an increasingly less wild kids’ music. But what is rock n’ roll? A friend says, “Rock n’ roll is what whites created to sell Black music, r&b. Elvis Presley was real, but Elvis Presley was created. And the thrust of white rock criticism has been to find, hype, and crown a stream of successors to that throne.”

Which brings us to a central question: What is white rock? For that matter (and more precisely), what is any Euro-American pop music? That is, without the African “elements”? A fairly close approximation of what real “white rock” would look like is afforded by the best Punk/New Wave outfits. As Bob Christgau said, “It doesn’t swing with a vengeance.” What drives one back to the barricades is that this is held aloft as some kind of charming quality or worse, an aesthetic goal worth pursuing. It is, if one is into perversions, and there are enough of that ilk to have established a complete school of thought. Imagine, digging something that don’t swing…

And that is the music under discussion: that which swings. It may swing in styles as diverse as a Santana guitar solo, an Ellington symphony, a Bob Marley groove, or a foggy mountain breakdown, but so long as you and I can find a common ground of funk, we’re in business. It was a perversion to raise rock n’ roll as something distinct from rhythm n’ blues when it was but an extraction; nothing was “added.”

No direct musical contributions, that is. But one technological achievement forever changed the artistic course of those who would handle it, and so the audience’s perceptions of “good” and “bad.” Electricity. Machine-made sounds. The studio. Electricity was the Promethean flame of modern pop; once blacks chained it rhythm n’ blues became soul became funk became… Distortion and feedback are familiar concepts to a people raised amid the harmony and melody produced from polyrhythm. Electricity magnified and set a new stage. James Brown never really played with electricity, exploring instead the components of The Groove; besides, it was not yet his time. Time and events coalesced with Sly and Jimi; who extended James’s vision and… electrified it. Rocked it.

Somehow, in reading even the most “enlightened” white publications or listening to “progressive” white stations, one doesn’t get this picture. Instead, one gets a history of Elvis emerging full-blown, with a nod to some anonymous guitar­ pickin’ sharecropper and Little Chuck Diddley, followed by the Beatles and Beach Boys with a taste of Motown, a quick ride on a Grateful Airplane, and a shove out the door by Alice Bowie.

I suppose what I’d finally like to see is balance restored. For every two columns on Patti Smith and Mick Jagger, Linda Ronstadt and Elvis Costello, I’d like to see seven on P-­Funk, Muhul Richard Abrams, Celia Cruz, and Quincy Jones. What I’d really like is three major FM stations com­peting to prove to advertisers that the largest potential audience of all is the one built around swing in its diversity. Stations that would carry you seamlessly from the Rascals to Sam & Dave to Earth, Wind & Fire to Ellington to Miles to Cachao to Tipica Ideal to Chic to Steely Dan to Springsteen to P-Funk (it can be done). Because to restore the balance properly the original perversion must be exorcised also: the categorization that got us all squared off into this nonsense in the first place. Does it swing or doesn’t it? Does it touch the spirit or doesn’t it? Does it move the body or doesn’t it? Punto.

But that won’t happen until racism receives its death blow; since whites must bury their monster (the rest of us can fight it or live around it but we can’t kill it), and since only token efforts in that direction have been made in the music world it is safe to assume that the casual hatred with which white pop is recorded, hyped, performed, and sold will be with us for a while. As well as the ongoing efforts to keep Black music in radio, stage, and print barrios.

So we are unable to enjoy music without factoring in that hatred; and we are unable to look at future developments without that same factoring. Nevertheless it is safe to say that there will still be growth. As always these developments begin at the soul of Black pop — its funk. In recent times that has meant following the flame as it has passed from James Brown to Sly Stone and Jimi Hendrix up through the present day and Maurice White (Earth, Wind, & Fire) and George Clinton (P-Funk). What is coming into being for the ’80s is the fourth postwar funk generation, and that group is stripping the sound to its basics and then distorting it electronically. In other words, young, small, self-contained Black rock bands. Black Rock — rock’s promise realized.

For the one overriding characteristic of this Rock is that it swings, twin guitar leads and all. This is not to exclude the inevitable parodies or antiforces that will arise in the music — but those groups will either carry that kind of improvisation into jazz or the avant-garde, or else return to pure funk. The swing of Black Rock also cannot be compared to that in white rock, supposedly best exemplified by the Stones. I’ve seen the Stones at the Garden in ’74 and recently at the Palladium; nothin’ happenin’. A diluted r&b backbeat, some electricity on top, and a jive, non-dancing, non-singing fool out front who still ain’t recovered from seeing James at the TAMI show in ’64. They couldn’t make my foot tap.

Black Rock, as Jimi tried to show and Funkadelic now teaches, maintains that primal backbeat. It is on The One, as opposed to the “almost” rhythm which supports most white rock, meaning it’s on time rhythmically and you can dance to it. Record company talent scouts at several labels report that last year they received more demos from young Black groups bearing a P-Funk influence than the ”cleaner” EW&F influence which had prevailed before. Their immediate heroes are George Clinton and Bootsy Collins, of course, but also such lesser known Mothership travelers as guitarist Mike Hampton, guitarist/composer Eddie Hazel, the late guitarist/vocalists Glen Goines, guitarist/vocalist Garry Shider, and keyboardist Bernie Worrel. These are just some of the people you’ll need to know in order to get a fix on what’s happening in three years.

Not that we get a clear picture of what’s happening now. Any poll like the recent Pazz & Jop affair in these pages which attempts to record current pop critical sentiment and manages to place only two Black artists (at numbers 27 & 30) among its top 30 is invalid. Unless it calls itself a “primarily white poll.” There’s a whole other world out there which laughs at the Clash and Elvis Costello.

All power to Bonnie Bramlett’s right hand. Now, everybody out on the floor. With your roller skates. And remember: One nation under a groove. 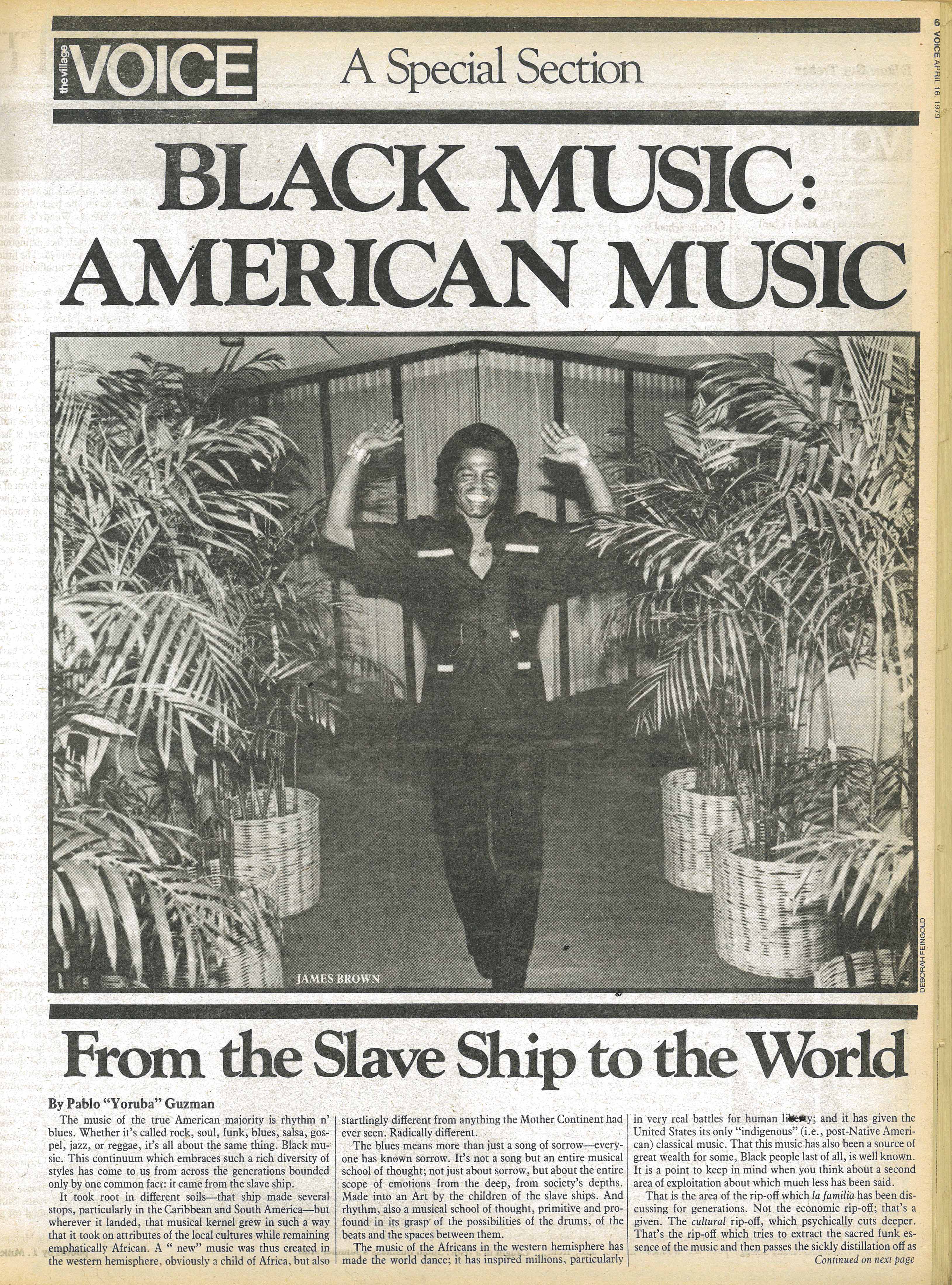 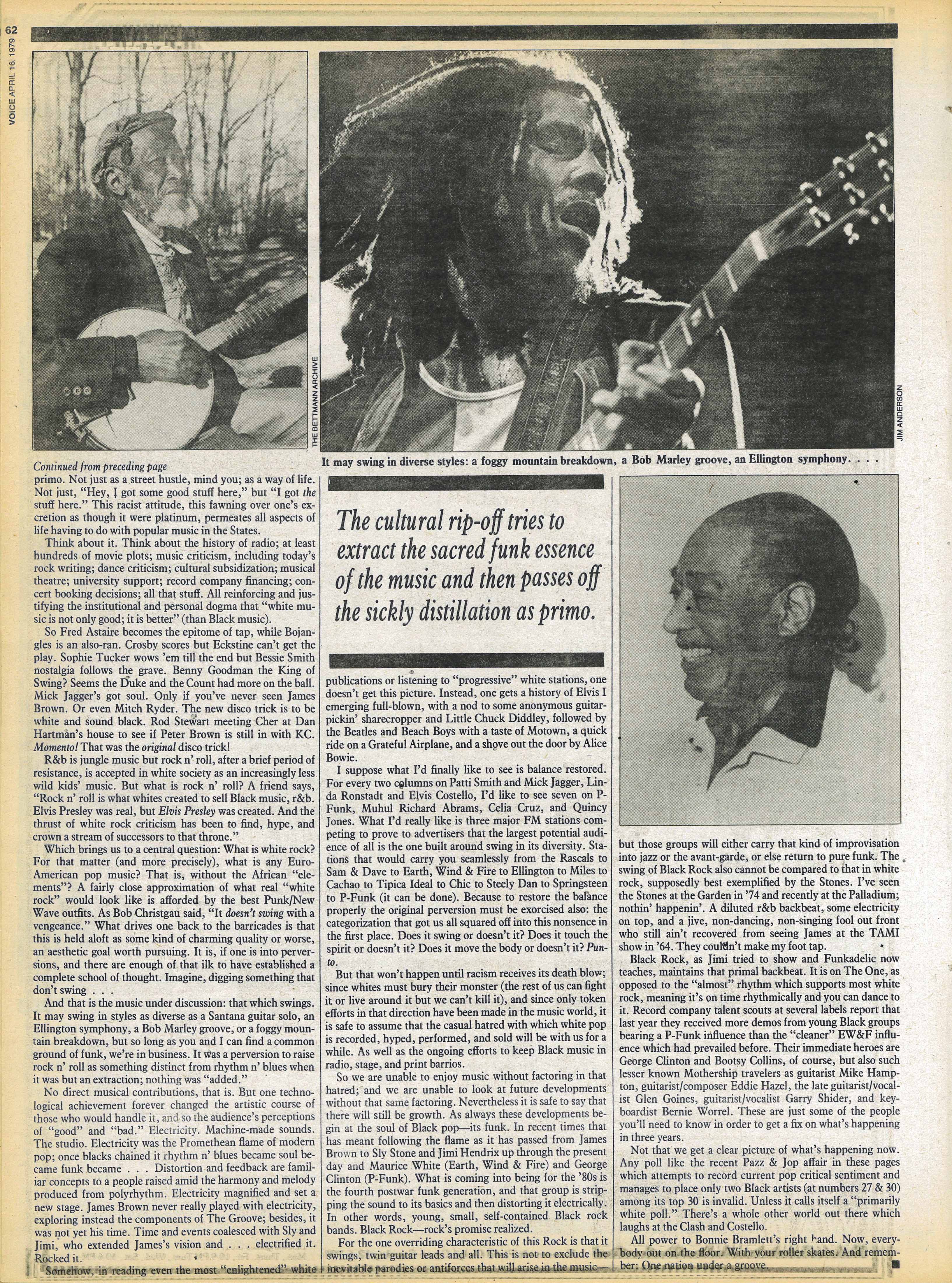