Shooting With Scorsese: Ready When You Are, Paisan!

Martin Scorsese, dressed in safari jacket, open neck silk shirt, jeans, and expensive Italian loafers, runs down East 13th Street, pokes his head into a Checker cab, and signals an assistant director, who in turn saunters over to a crowd milling behind a wood blockade. “Folks,” he says, “real quiet — we’d appreciate it. There’ll be a gunshot. Don’t be afraid.” A beat up floozy nudges her companion. “They’re making a movie about our ghetto,” she says. The assistant director yells, “Quiet please!” And the shooting begins.

Robert De Niro swaggers out of the cab, crosses the street to where Harvey Keitel slouches in a doorway. De Niro pushes Keitel. They exchange angry words. De Niro stalks off, turns around, pulls a gun from his jacket, and fires. The noise rings like the Hindenburg crash — so loud, in fact, that it doesn’t quite sound like a gunshot. Thirty minutes later, the scene begins again. This time, the gun doesn’t go off. An hour later, another start. But De Niro’s too close to Keitel, and is afraid to fire the blank cartridge. On the sixth take Scorsese says, “Print it.” De Niro says, “Shit.” And the assistant director yells, “It’s a wrap.”

This is “Taxi Driver,” Martin Scorsese’s fifth feature film (after “Who’s That Knocking at My Door?,” “Boxcar Bertha,” “Mean Streets,” and “Alice Doesn’t Live Here Anymore”). It has been shoot­ing on the streets of Manhattan for nearly eight weeks. In addition to the East Village, locations include the Belmore Cafeteria (a hangout for hack drivers); Columbus Circle, where a political rally for a presi­dential candidate was staged; and a condemned apartment house on west 88th Street and Columbus. A stranger on the set might conclude that he was watching chaos on a high budget, but in fact, it was a highly organized sequence of events, or­ganized by Scorsese himself. 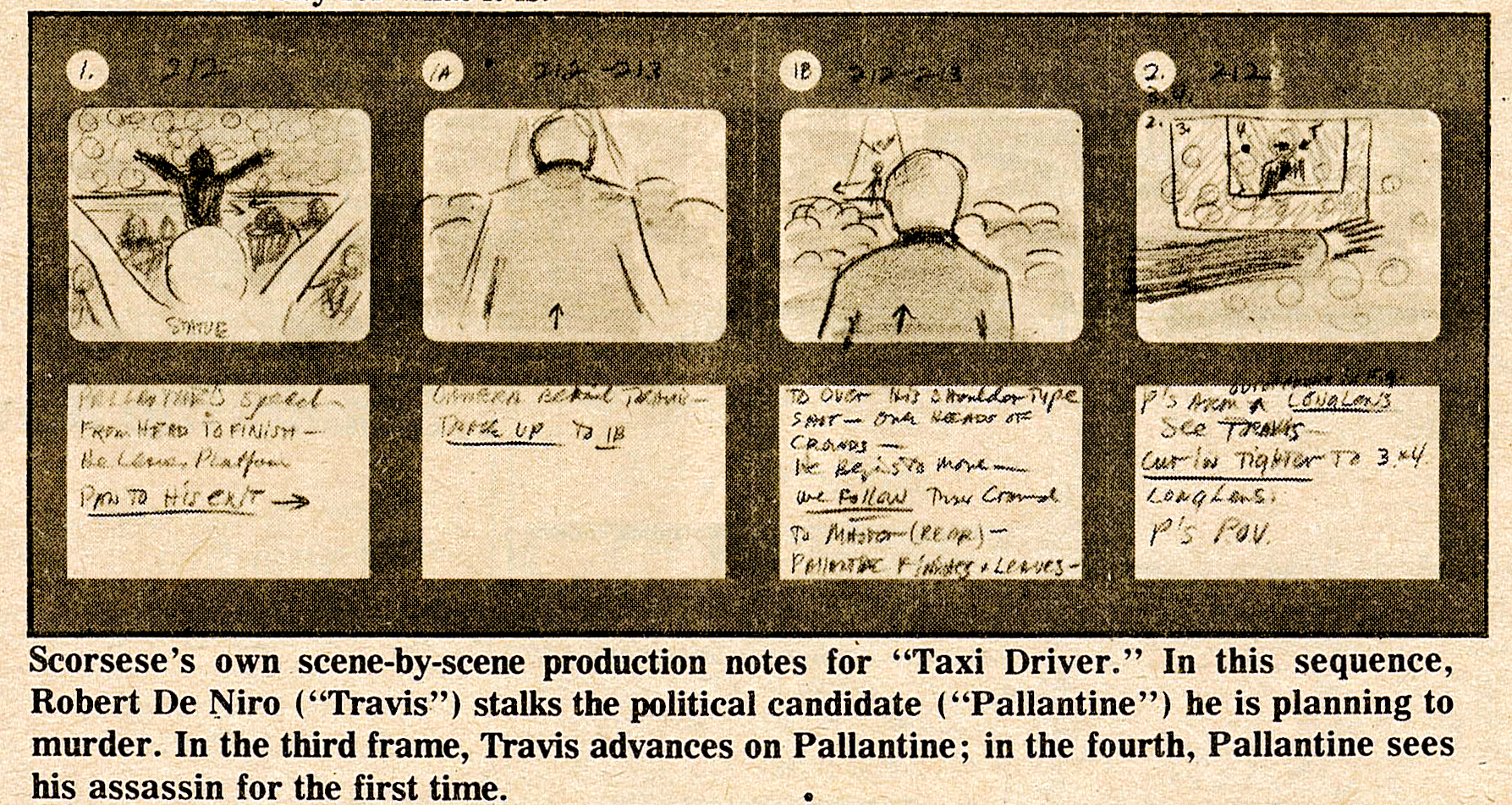 The plot superficially resembles “Nashville” but it is unmistakably a New York story, set in an unmis­takably urban milieu. The lead character, played by De Niro, is a Vietnam vet. Like most cab drivers, he is treated as a part of the vehicle: people screw in the back seat, drug connections transpire; yet he re­mains completely anonymous to the passenger. In his travels, De Niro meets an ambitious presidential campaign worker (Cybill Shepherd), a 14-year-old hooker (Jody Foster), and a pimp (Harvey Keitel). Some­where along the line, he decides to shoot the presidential candidate.

Circumstances intervene: his vic­tims instead are pushers and pimps. Ironically, he is acclaimed for his heroism.

How the film will be interpreted is a matter of some concern to Martin Scorsese. He is afraid people will think there are parallels with Arthur Bremer’s assassination attempt on George Wallace. But the fact that the target is a candidate is peripheral. The issues are psychological, not political.

It’s easy to summarize the film’s plot, but watching the drifters on East 13th Street, one wonders how many potential “taxi drivers” stalk the city streets. Where does life begin and Central Casting end? This was particularly noticeable a couple of weeks ago, during the filming of a breakfast scene at a pizza parlor on the corner of 14th Street and Third Avenue. The neighborhood hookers were hustling the crew, the local bowery figures were panhandling, fights erupted between derelicts. And Catherine and Charlie Scorsese, Marty’s parents, sat regally outside Variety Theater, proudly listing their son’s accomplishments to the sympathetic ear of a storefront pusher.

Mama Scorsese is often on the set, doling out humor and advice. She is a silver-haired heavyset woman, dressed immaculately in white. Marty treats her the same way he treats Keitel: he jostles with her and she doesn’t hesitate to jostle back. Some people say that this oddly fraternal give-and-take resembles the on-screen relationship between Alice and her son.

During a break from shooting, Marty talked in his trailer about movies. Films that have influenced him the most are Kenneth Anger’s “Scorpio Rising,” “Duel in the Sun,” and the westerns of John Ford. “I also used to see Sam Fuller’s pictures at the Academy of Music when I was a kid. ‘Pickup on South Street,’ ‘House of Bamboo’ and ‘Forty Guns.’ ‘Park Row’ I saw every night on ‘Million Dollar Movie.’ The films of Michael Powell and Emeric Pressburger are great. I know it’s going to sound crazy, but my favorite is ‘The Tales of Hoffman.’ It’s a bad movie in many respects, but I learned a lot about editing and camera movement from watching it over and over. The dancing doll sequence is just gorgeous.”

It’s somewhat incongruous hear­ing that Marty, who was born in Corona and learned the facts of life on the streets of Little Italy, received part of his training in the charlotte russe school of cinema claptrap. Does Marty consider himself a maker of New York films in the same way that Paul Mazursky has been a chronicler of the Southern California way of life? After all, “Mean Streets” not only captures the physical soul of the city but the emotional pulse of its inhabitants. “I don’t know,” replies Marty in his rapid fire, mile-a-minute hyperkine­tic delivery. “New York is a whole character in ‘Mean Streets’ and ‘Taxi Driver,’ too. I love this city and take it for what it is — it’s good and it’s bad. I love the fire hydrants squirting water on summer nights and I love the ethnic joking among the crew when we film here. I don’t find that in L.A.” 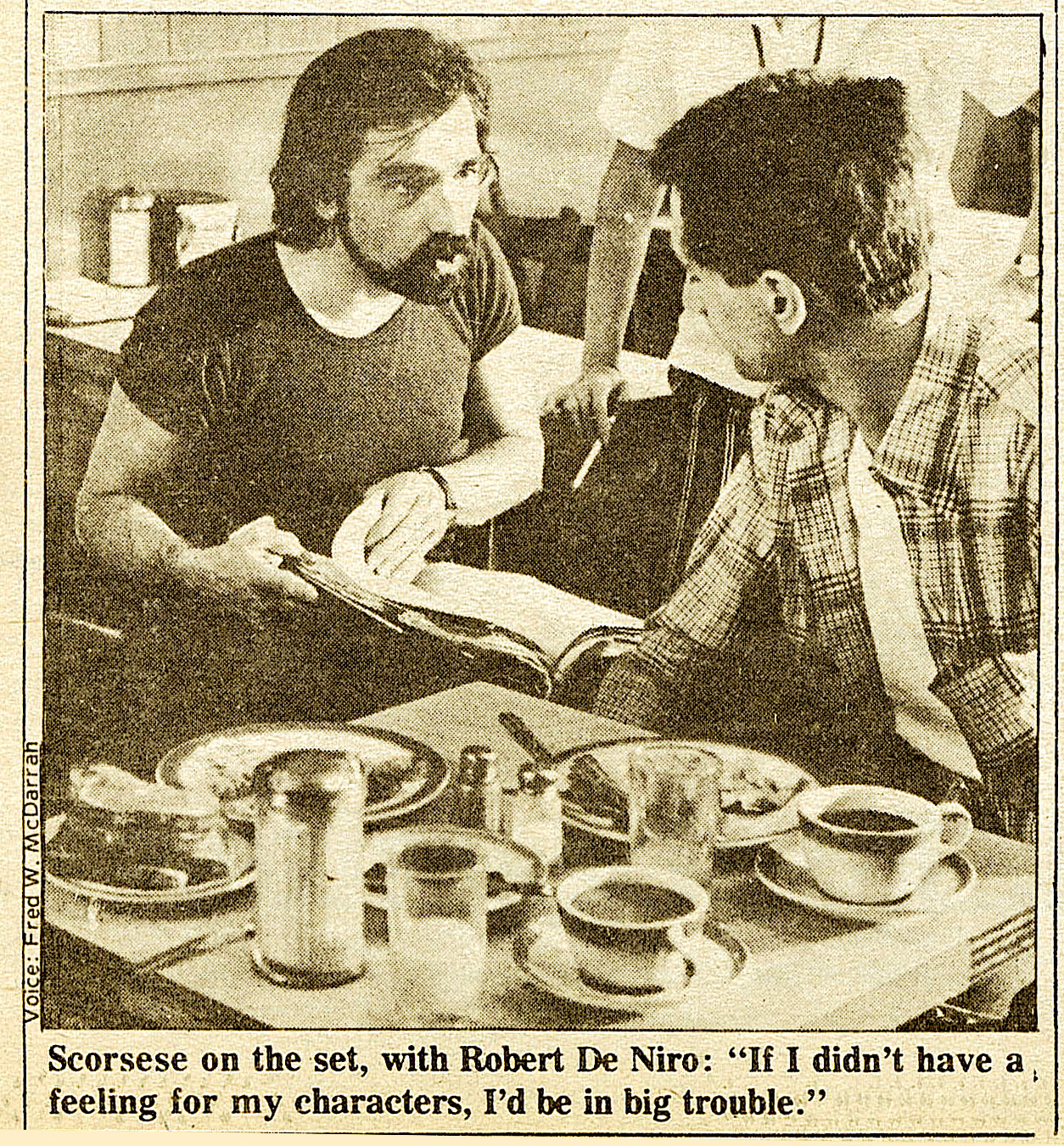 Was filming “Alice Doesn’t Live Here Anymore” in Tucson like tak­ing the boy out of the city but not the city out of the boy? The film was a collaborative effort between scriptwriter Robert Getchell, Marty, and Ellen Burstyn who put a lot of her own personal experiences into the movie. “If my films aren’t auto­biographical, there are certain feelings in the characters which I iden­tify with. Otherwise, it would take too much energy to make a movie and if I were disinterested in the characters, I’d be in big trouble. Even Barry Primus in ‘Boxcar Bertha’ carried my attitude and overview of the world.”

In all of his movies, Marty’s com­passion, even for his dirty rat char­acters, shines through. For instance, in a “Taxi Driver” scene which he shot a couple of weeks ago, Jody Foster tells Harvey Keitel she doesn’t want to whore anymore. In­stead of slapping her down, Harvey picks Jody up and starts dancing around the room with her. He tells the young girl how much he needs her, how much he depends on her. The scene between pimp and hooker which began its life as a confronta­tion scene, suddenly becomes a love sequence. “It really doesn’t have much to do with the narrative struc­ture,” says Marty, “but it develops further insight into the two characters.” Would Marty be incapable of filming a cold and deadly movie, such as a film on the Houston mass murders of a couple of years ago? He contemplates the question for a min­ute or two, furrows his brow, and answers “I’m afraid so. For exam­ple, the murders in this movie were filmed in six days, and each day it got more grim to go into the hallways where we were filming and see artificial blood. I just got very upset.”

Suddenly we’re interrupted by an aide. “Marty,” says the aide, “do you want the cab to park against the curb or should it be double parked?” “It should be crazy,” replies Marty. “Jutting out into the street a little, the front this way, the back this way.” Marty juts his body to the left and right. He seems to want to leap toward a drawing board to sketch a diagram of the cab, the same way that he sketches each scene in his films, but the aide says “Gotcha” and leaves the trailer at about the same time that Michael Phillips enters and deposits a couple of “Taxi Driver” T-shirts with us. Minutes later, Bobby De Niro whizzes in and whizzes out, silently, stealthily, like a pickpocket in the subway rush. De Niro is one of our great actors, yet the public knows more about Garbo than they do about Bobby. He shuns interviews, he keeps to himself, his private life’s a mystery. Why? Marty shrugs. “He was always shy, even at the age of 16 when I first met him. And when he works, he just blocks everything and everyone out. Ellen Burstyn was like that. She didn’t talk to anybody. When we were shooting ‘Alice’ she was al­ways by herself trying to concentrate. I can understand that, because when I work I get distracted a great deal. Bobby chooses to stay in his trailer, and that’s it. I don’t even bother him. I knock at his door. I say, ‘Can I come in?’ He says ‘sure, sure.’ Otherwise I leave him alone.”

It’s near midnight and we leave the trailer and wander down 13th Street which is still teeming with humanity. Old women, their elbows perched on pillows, lean out their windows, surveying the street scene. Marty ambles over to his mother. They kibbitz. Ellen Burstyn stops by after her performance in “Same Time, Next Year” and stays to watch more retakes. The crew gets giddy as the hours pass by. There’s black coffee, feet drag, the crowd starts to thin out. The scent of un­collected garbage hangs heavy in the air. Taxi horn noises fill the air. One of the city’s lost souls sits in the gutter, gulping a Rheingold. He is merely an extra. Movie time in New York. 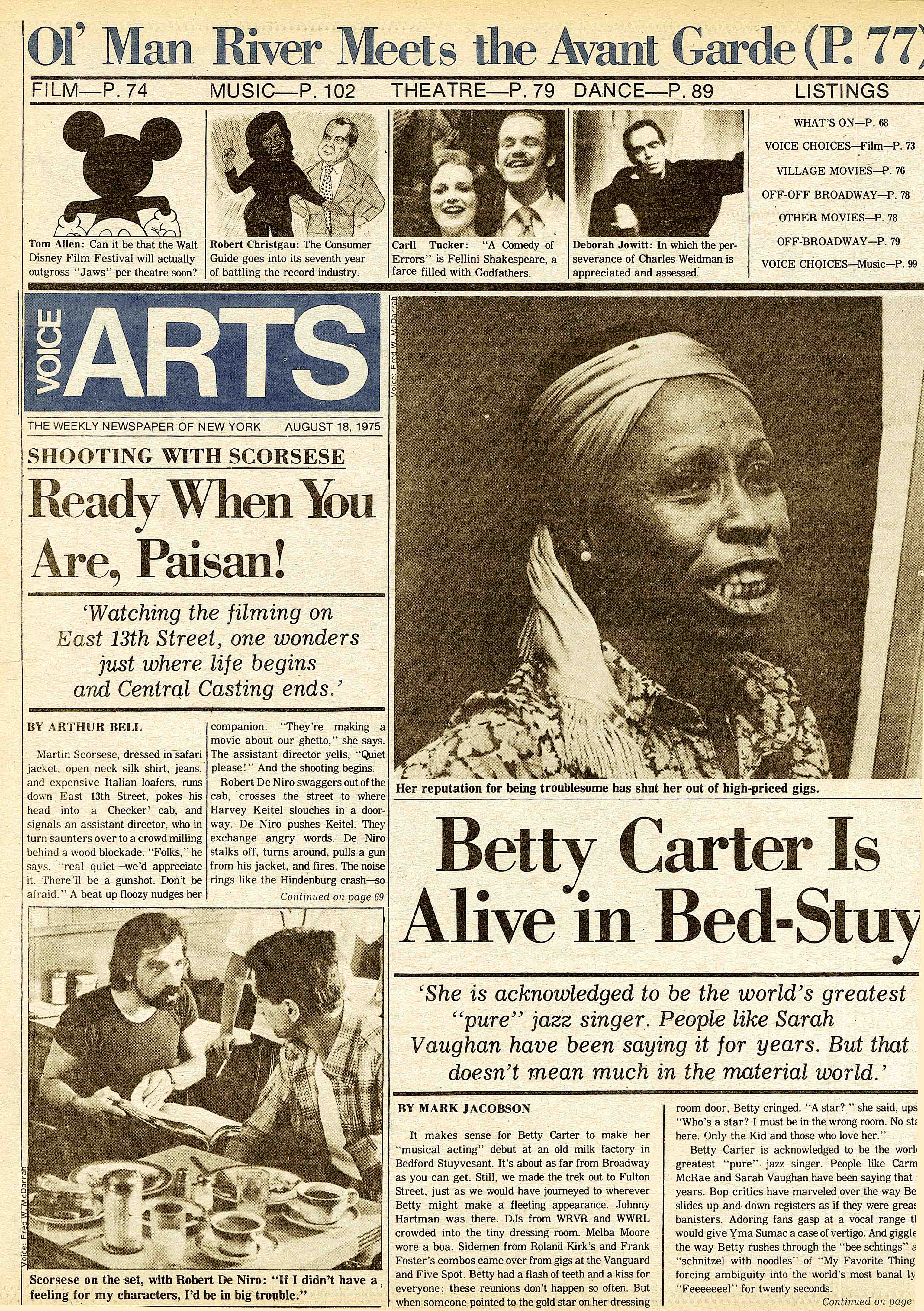 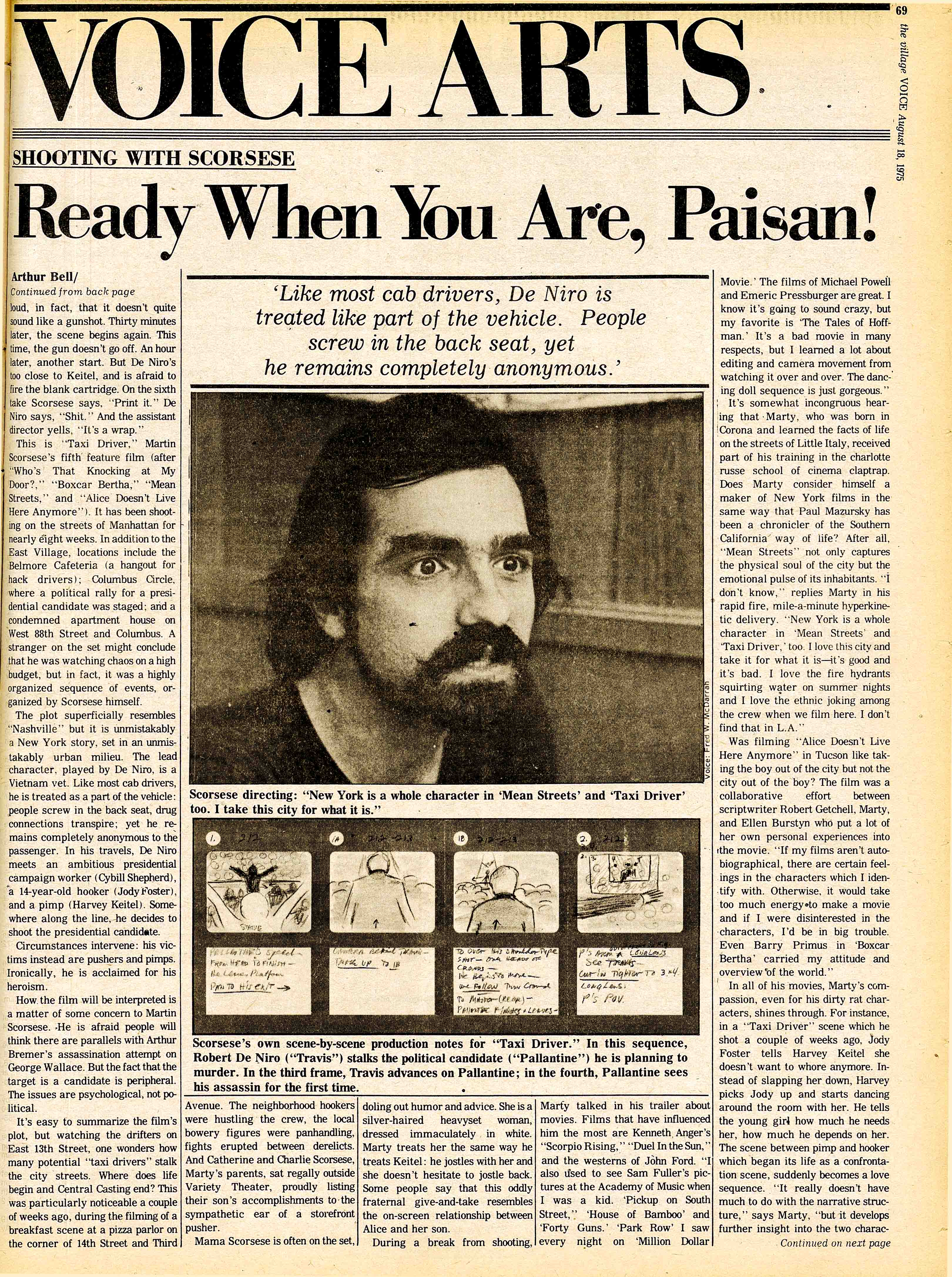 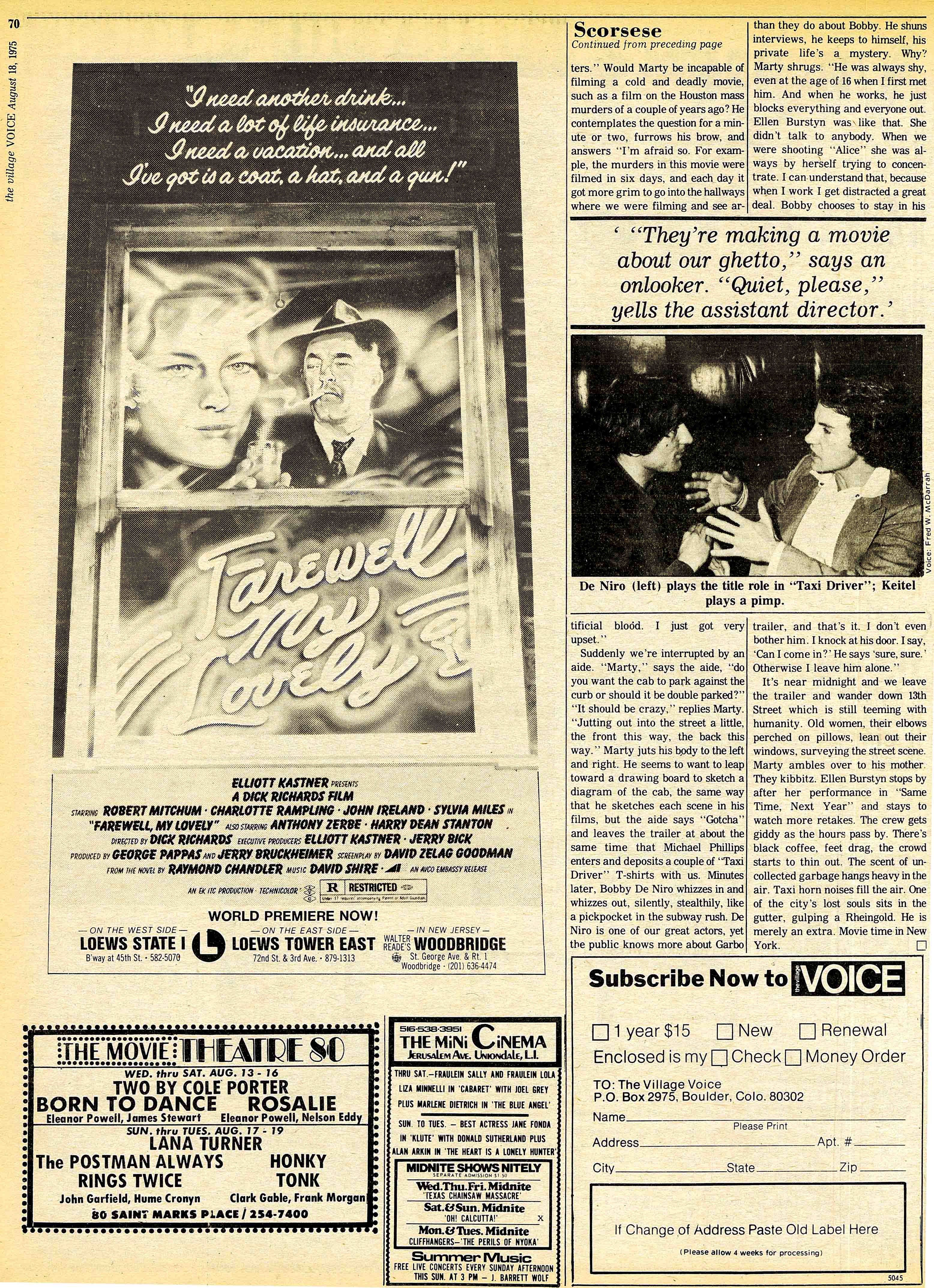