It was the Genesis of the Aquarian Age. And our minds were without form and void, and paranoia was upon the East. Somewhere in the far reaches of the mind of one man was the seed of an idea. And with the seed the man created a world. And he populated it with other men who raised tents and built a city. It was a city of peace. And music. And love.

And the people that lived in the city saw that it was good and they loved their neighbor and shared with him all that they had. And many extended hands to those who were falling and gave comfort to those who needed it. And a large tent was raised so that all who were sick could receive help. And people were born. And people died. It was one hell of a city.

All the world needs is love and what a great place it would be!

The people of Monticello, Bethel, and White Lake proved that.

They were so great to us that I just don’t know how to say thank you.

Fifteen miles is a long way to walk, but the beauty of the people made it all worthwhile. Love was there, and its music filled the air.

Three days of intermittent attendance at the Aquarian rockets in the Catskills proved to be, literally, a mind-blowing and eye-opening experience. Observing those gentle, courteous, considerate, kindly, caring kids gave one some genuine hope for the future of this country. Th se young people could well be telling us something about the political realities in America today that the violent revolutionaries and fiery tear-it-down militants have yet to comprehend.

In only a few days they succeeded in turning the open hostility, distrust, resentment, opposition, and even hatred of the resident population — mostly conventional, conforming rural types and middle-class Jews making the Catskill vacation scene — into almost universal affection, admiration, and respect. Call it instant conversion, but such radical alternation of attitudes had to be seen to be believed and properly appreciated. 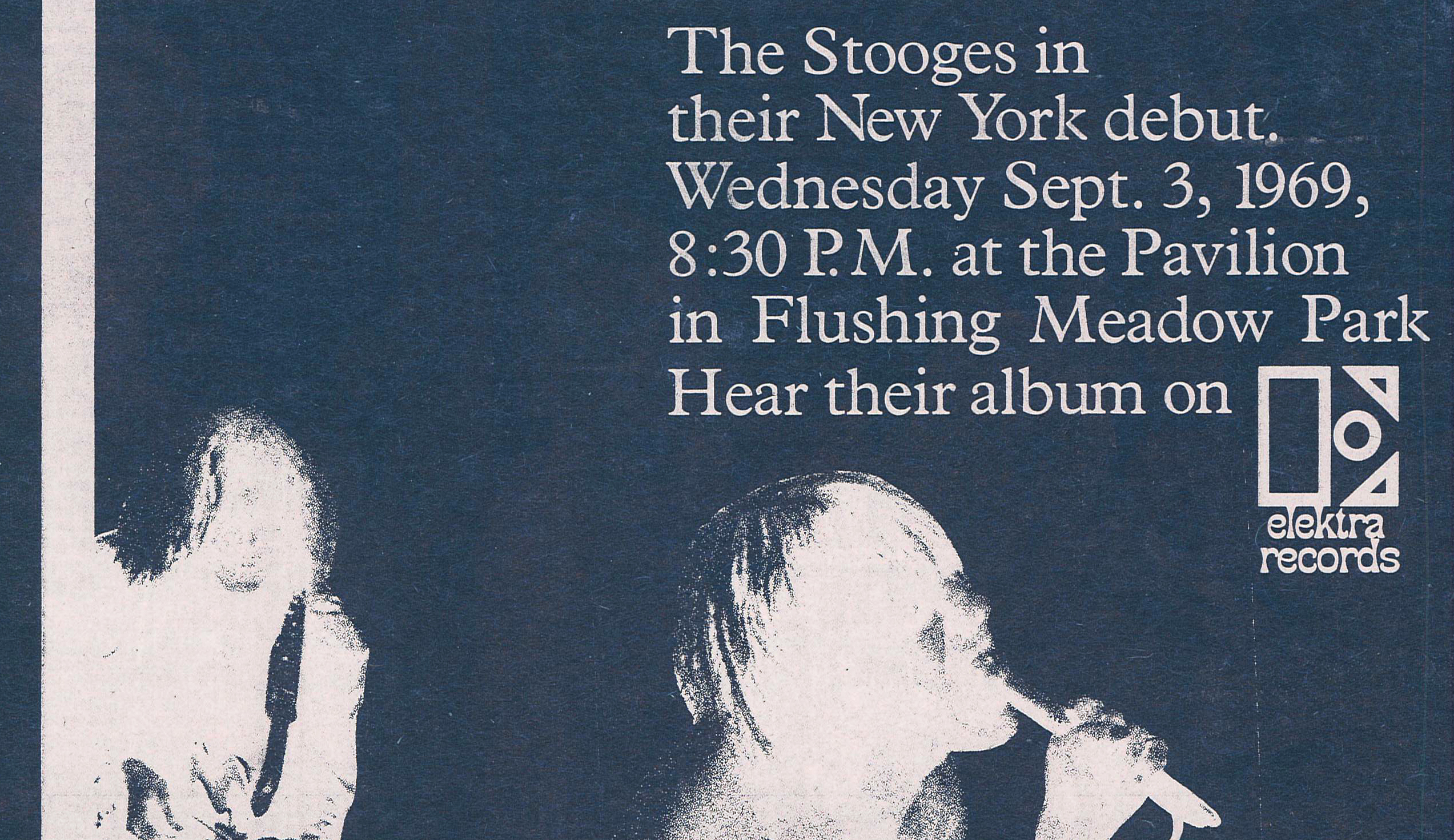 Is it hopelessly naive to argue that the vast social change so desperately needed in this country can be achieved in like manner? Is it perhaps possible that the cultural revolution will, indeed, supply the blueprint for the political revolution?

Bloody confrontations, violent threats, obscene epithets, wild rhetoric, unbridled rage will, admittedly, produce some limited change and movement. But once the repression begins — and begin it will in the face of accelerated revolutionary violence — those one or two small steps forward will instantly be converted into 100 giant steps backward.

The great majority of Americans still do not feel oppressed. If we ever hope to win them over, it won’t be done by spitting in their faces and prodding them up against that wall. Maybe the kids really know something about the struggle for men’s minds and hearts. Does the answer lie only at the end of the barrel of a gun? Or is what happened in the little town of Bethel last week the real way?

The success of the Woodstock Music Festival should be a lesson to the organizers of peace marches and rallies. We are bored to death of masturbatory speeches which serve only to gratify the egos of the statisticians who make them. Get Janis and Jimi Hendrix and Blind Faith into the Sheep Meadow and you’ll get 250,000 others there too. And it’ll be fun. Yes.

I must thank Steve Lerner for his objectively positive coverage of White Lake (VV, August 21). I was really glad to read the exact consolidation of everything I felt and thought, but which hadn’t quite settled in my head yet. There must be other words for it besides appreciative appreciation.

I only hope that his article falls into the hands of some scornful scowling put-downing square who, suspiciously skimming for sarcastic opportunities, becomes trapped and beguiled and confused and beneficially influenced into having no opinion at all.

P. S. I also think that Serena Silverstein (Voice Letters, August 21) is allowing herself to become too old and cranky.

You will hear much about the Aquarian Exposition. Here is the opinion of one eyewitness. 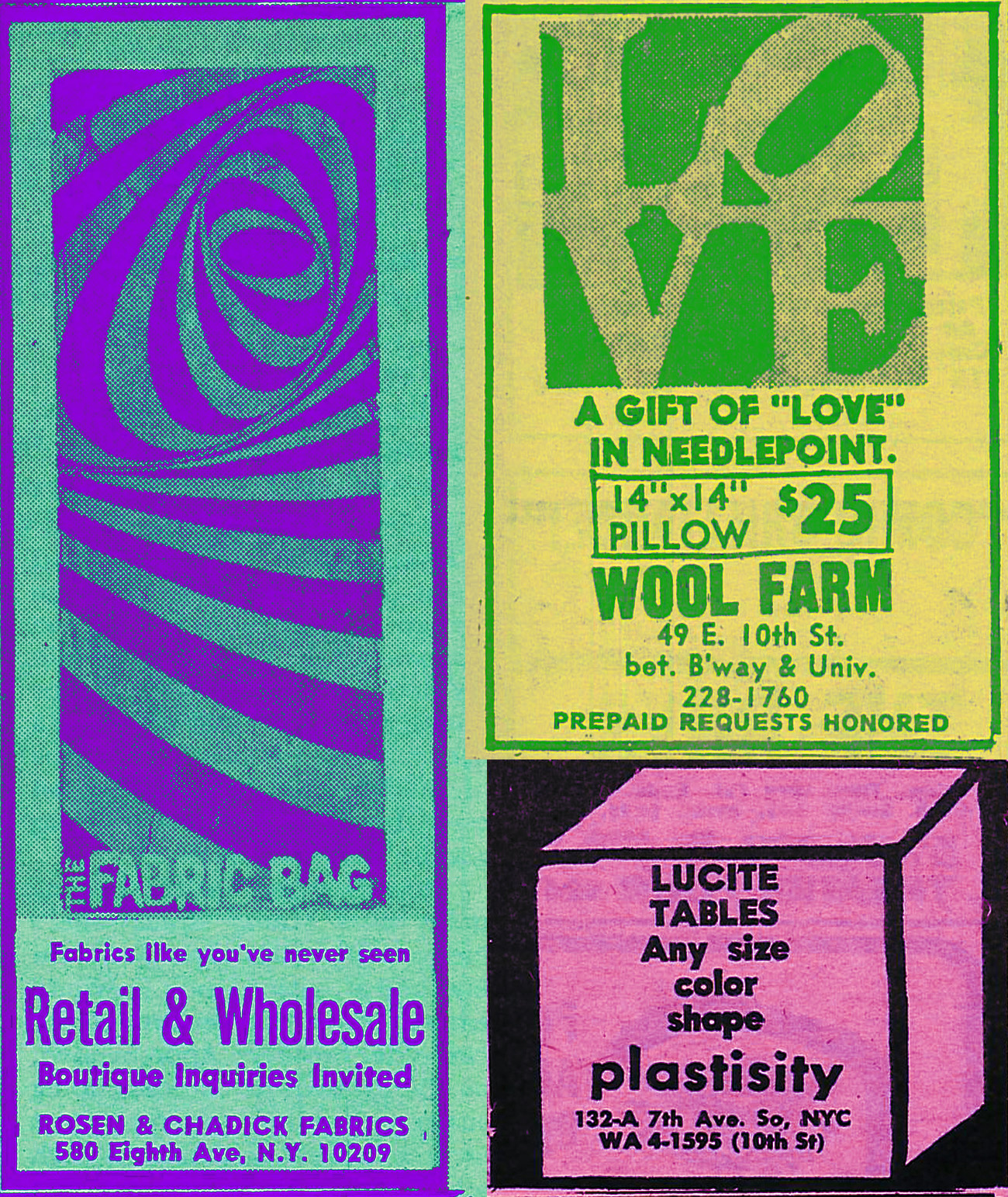 I really must reply to Serena Silverstein’s letter (VV, August 21) where she bitched about the White Lake rock festival. Serena, you should have parked your car and forced yourself to walk the distance to the music. I can only offer sympathy for your outlook. It was really your tough luck that your head was preoccupied with viewing the festival in terms of the inconvenience which you were exposed to.

Woodstock Ventures should be congratulated and not chastised for giving us smiles, peace, music, and good vibrations. Sorry, Serena, but you truly missed out on a beautiful experience.

May I address my remarks to the child of comfort, Serena Silverstein (Voice Letters, August 21), who, upon observing the hardships of White Lake from her well-upholstered tower, missed the whole point?

It is true that “food, water, health and sanitary facilities” were poor, and it is true that a great deal of hard walking was necessary; I, and many others I know, returned home with assorted illnesses all stemming from being wet, and constantly rained upon to become wetter. My normal attire is not mud; I usually get a little more to eat than I did there; and let me tell you, man, my hair still hasn’t completely dried! BUT…

It was much, much, more than the music, Serena. The moment I climbed from my car and began the hike to Max’s pasture on Friday morning, I suddenly knew what it was all about. Didn’t you look around? Couldn’t you see the immense camaraderie which grew among all those beautiful, wonderful people? On the road I was stopped by a fellow for a cigarette, and in return he gave me a joint, with a beautiful smile that made me love him immediately — him and all the smiling “freaks” who are stomped upon at home, but who found, for the first time, a sense of real FREEDOM, and an intense feeling of belonging. We all belonged, to one another, to the place, to the moment. I did not hear one angry word or see one flicker of disgust in anyone’s eyes. All I saw were thousands of strangers becoming friends; all I heard was laughter, singing, words of peace and love. The music was just a part of what White Lake was all about. A little physical discomfort is well worth three days of total unselfishness, total giving, and responding to one’s brothers and sisters who, like us, are searching hungrily for that spark of beauty in man — in the SOUL of man — which distinguishes him from the ape.

We were not “duped.” If we had been any other large crowd assembled to hear music and subjected to untold misery, we would have been “duped, ” and cheated, and used. But we were not any large crowd — we used White Lake to establish a bond of trust and friendship. We turned what could have been an unfortunate, uncomfortable mistake into a congregation of warmth. We gave, we received, we helped and we were helped. Our “image,” so to speak, with establishment people was redefined. The cops and doctors from Liberty could not get over the fact that from among 400,000 or more people, there was not one fight, not one bloody nose, not one stab wound. And the most remarkable thing to me, who was born and raised in Manhattan, was that, with all my conditioning to beware of strangers and to protect myself from potential harm, I did not FEAR — not once, in that wonderful, happy mob of thousands. There was nothing, no one, to fear. Have you once been able not to FEAR, Serena?

To all of you thousands who endured because of one another, and for one another, I thank you for being what you are. I wish you peace, flowers, freedom, happiness.

In such a large group of teen — and twenty-agers — as there was at the Aquarian Exposition last weekend the atmosphere of cooperation and “let’s enjoy it all despite the elements” was really amazing. As the announcer Saturday afternoon put it, “We’re all glued together and stuck in the same mud puddle.” We showed, perhaps, that things taken from the positive side of “we’re all basically good” rather than the “this many kids have just got to be policed to the hilt” attitude can bring happy results. This is the first time in my life that I have seen so many youths smile, wave, and thank police with no antipathy whatsoever between kids and cops.

The shortages of food and drink as well as the music itself were all peripheral to the tremendous uplifting experience of such a beautiful living-together. Even the use of drugs was almost meaningless — an escape from an uptight world we were proving need not exist. Learning to live together in crowded conditions in real peace and brotherhood is no longer a catch-phrase — it has been accomplished, for however short a period of time. A beginning has been made. Officials have been used — and appreciated — for helping the “general public,” not for hindering them. People walked for miles, hours, days shoulder to shoulder without pushing and shoving — with smiles, songs, and helping each other by offering rides, food, and drink to one another.

Though every one of the hundreds of thousands who spent any time at all at Bethel this weekend will bring some of that brotherly love and concern home with him, it is far from enough to change even New York City. Hopefully, it will not be the only happening of its kind — something to tell our grandchildren about. Hopefully, our grandchildren will live in a world with an attitude similar to that in White Lake, New York State’s third largest city this weekend — where even local residents, who would have had the right to react with an imposed-on feeling, instead donated food and water to those walking the 15 miles from Bethel to the nearest bus stop in Monticello. Can you imagine what the subway would be like with such an attitude? 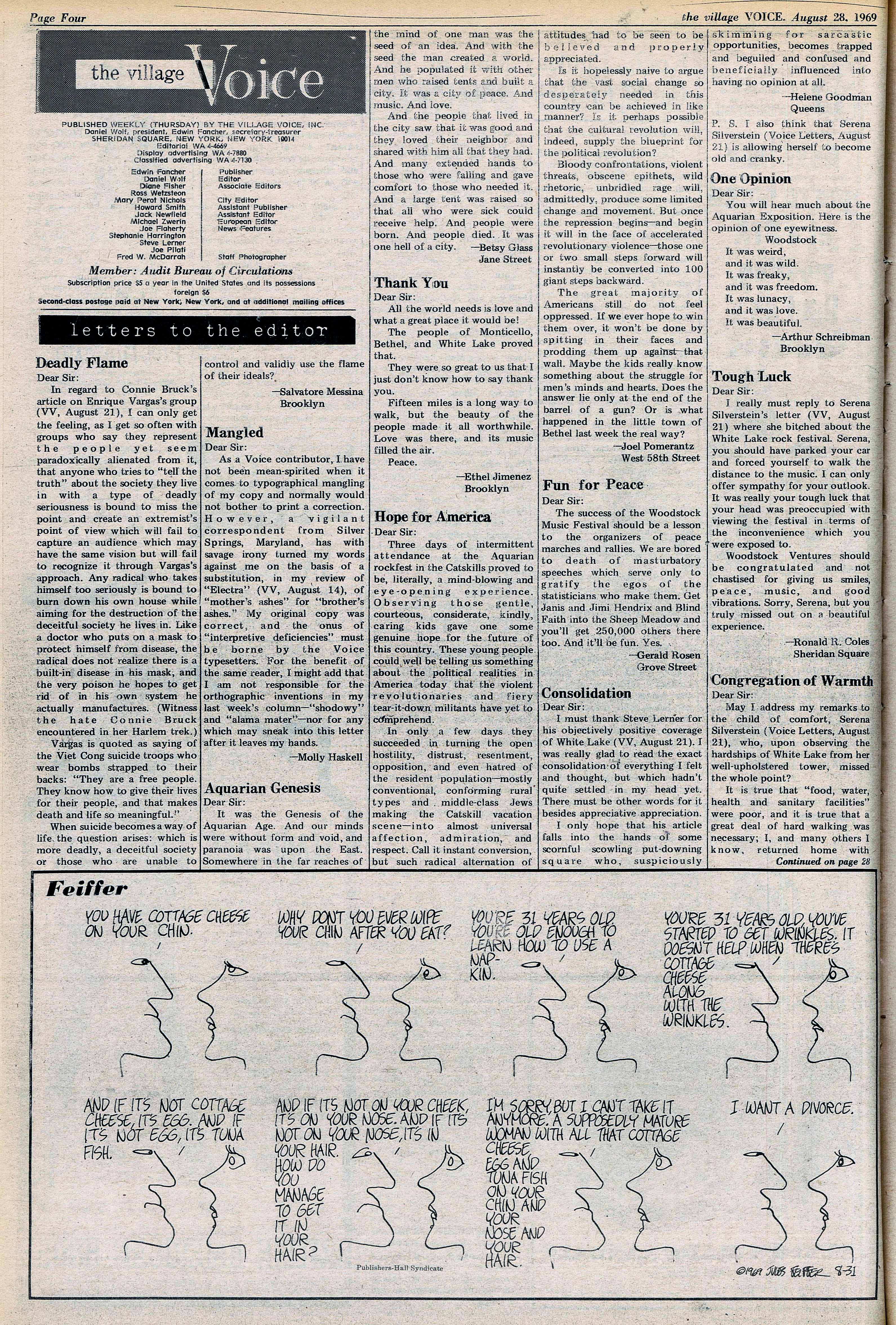 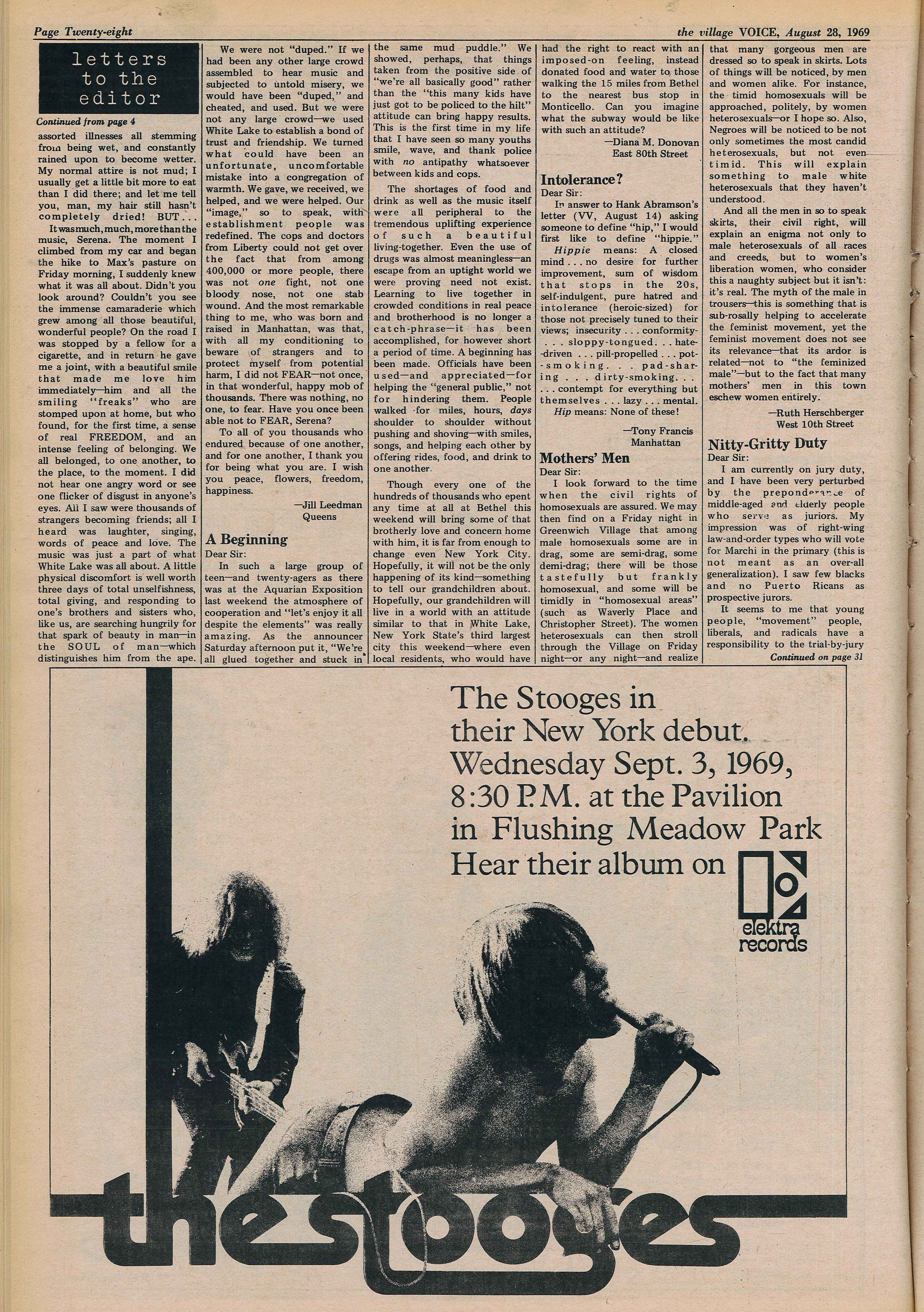 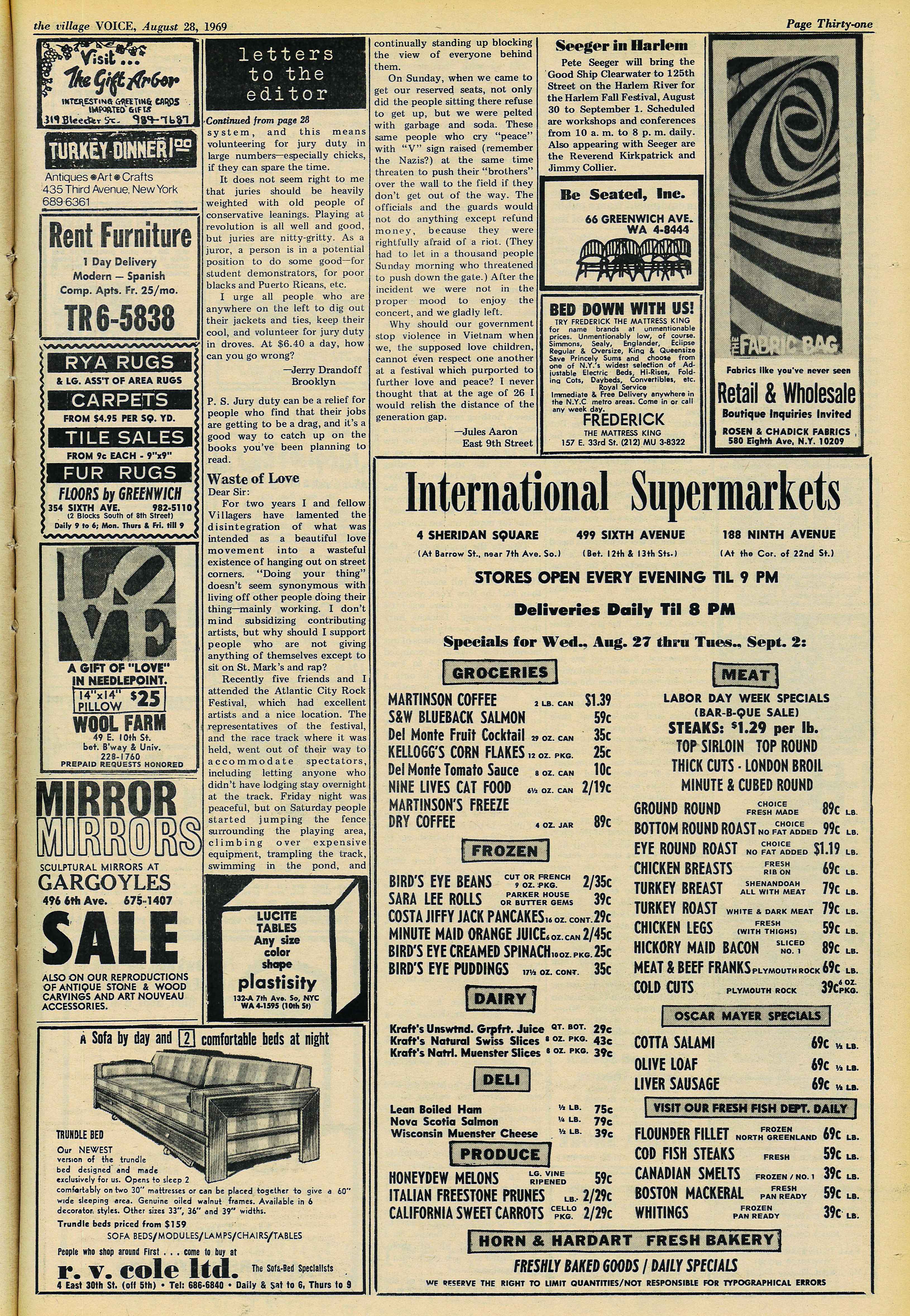