The White Issue: “Jews Are Not White”

In the context of American politics, to be “white” means to be a beneficiary of the past 500 years of European exploration and exploitation of the rest of the world — and hence to “owe” something to those who have been exploited. So when Jews are treated as white in the United States, the assessment is not a crude physical one but a judgment of Jewish culture and civilization, history and destiny.

But Jews can only be deemed “white” if there is massive amnesia on the part of non-Jews about the monumental history of anti-Semitism (which continues to play an important role in European politics today even after Europeans did their best to mur­der us all off), combined with the willful accommodation of Jews who have uncon­sciously internalized the anti-Semitic demands of the larger culture. Lecturing on campuses around the U.S. as editor of Tik­kun, a progressive Jewish journal, I’ve met thousands of young Jews who never learned or have conveniently forgotten the realities of their own history. These Jews now imag­ine a Jewish past fat with exploitation, ap­parently not realizing that Jewish socialism and the revolutionary traditions of the Jew­ish people were fostered out of poverty and oppression.

But isn’t all that “merely history” and a wallowing in the past? After all, it’s not the 1930s anymore, and though it’s true that the neo-Nazis once again roam the streets of Germany, recently dousing a man with alcohol and burning him alive because he was mistakenly identified as Jewish; true that Polish politicians recently had to con­vince the electorate they were not Jewish to satisfy the anti-Semitism-without-Jews that continues to flourish in Eastern Europe; and also true that as Russian parliamentari­ans denounce the free-market reformers as “tools of the Jews,” Russian nationalists ar­gue that all of communism was simply a Jewish plot that took over the soul of Russia — all of this ranting is in Europe, not in America, whereas the “white” that is being attacked is the white that contemporane­ously flourishes in American society. How can you deny, the argument goes, that here, in this country, Jews have assimi­lated so well into the mainstream that they have won all the benefits of whiteness, and hence must assume its historic responsibil­ities as well?

Quite apart from the fact that this argu­ment leaves out the hundreds of thousands of Jews who have not “made it” the way their Manhattan brothers and sisters may have, it is wrong because it misunderstands the specific nature of Jewish oppression.

As feminists and gay theorists have shown, oppression operates in ways that cannot be reduced to material well-being (or lack thereof). And Jewish oppression has its own specific forms. Jews have re­peatedly been offered a devil’s deal by Eu­ropean societies: You can move out of the position of the “most oppressed” if you become the public face of oppression to the rest of the society, the middle men (and, increasingly, women) who will represent the elites of wealth and power to the powerless. In Eastern Europe that meant being the tax collectors, foremen for the large Polish landlords, tavern owners, or small business­men. (Though Jews never owned more than a small fraction of banking and commerce ventures — among the few fields Christian Europe allowed — ruling elites regularly fo­cused on supposed Jewish economic power to deflect attention from society’s deeper class divisions.) In Western Europe and now in the U.S. it means, increasingly, be­ing the doctors, lawyers, social workers, teachers, government employees, publish­ing and media people who run the interme­diate institutions charged with forging con­sensus and keeping people behaving within the bounds of the established system of economic and political distribution.

A good deal? Only when things are run­ning smoothly — and at such moments, Jews claw their way into these positions, and many blacks and other minorities resent the Jewish “privilege.” But when things get bad, as they did in Germany in the ’20s and early ’30s, and as they may in America as we decline in the international capitalist struggle, ruling elites quickly turn on the Jews, and as the anti-Semitic lyrics of some rap music make clear, there are always those among the most oppressed who will fall for this manipulation.

This implicit deal, this precarious inter­mediate slot, puts Jews into a position of structural instability. Most Jews intuit the instability, but they don’t have a theoretical understanding of the legitimate grounds for their fears. Instead, conservatives in the Jewish establishment play on those feelings, telling Jews that their instability is caused by blacks, Palestinians, social-change-ori­ented liberals. So legitimate Jewish fear is transformed into a paranoia that serves the interests of the very Jewish elites who most benefit from “the deal.” Manhattan liberals then denounce the paranoia and get to feel superior to their cousins in Brooklyn and Queens, never recognizing that their own association with the immoral institutions of American corporate power may help to generate the anti-Semitism that working-­class Jews have to face in their daily lives.

Israelis bought into a similar “deal,” ser­vicing American corporate and Cold War interests, and in the process became the public face of oppression to many people in Central America and Africa. However much we may legitimately criticize Israeli policy toward the Palestinians, we must first acknowledge that the historic oppres­sion of Jews helped create in them a pain so deep that many were unable to notice that, as they leapt from the burning building of Europe, they’d unintentionally landed on the back of another people. Surrounded by a world whose hostility has produced 2000 years of homelessness and oppression, and by a Palestinian people whose pain they are unable to acknowledge because of their own, Jews may find it hard to recognize that the existence of Israel renders them beneficiaries of great privilege or power. The terrible errors being made by Israel today are a consequence of sensitivity-dull­ing genocide — compounded by decades of implacable Arab hostility when it was the Jews who were stateless and living in dis­placed-persons camps and it was the Pales­tinians who were denying the Jews the right to enter Palestine.

By failing to recognize the structure of Jewish oppression, the humanists and pro­gressives in the non-Jewish world manage to strengthen Jewish rightists’ claim that others “just don’t get it,” a claim they then use to buttress every reactionary poli­cy. Those who see Jews as “privileged” or “white” actually help strengthen Jewish right wingers’ paranoia about a world that will always remain as insensitive to Jews as it has been in the genocidal 20th century.

It is impossible to imagine that any other people that had one out of every three of its members murdered in the past 50 years would be seen as “privileged” — except by those who in some way covertly sympa­thized with the murderers. The most twist­ed accommodation lies within those Jewish multiculturalists who, never having strug­gled with Talmud or other classics of their own tradition, and having done their best to straighten their hair, bob their noses, and lower their voices, have now willingly joined in a celebration of a multicultura­lism that excludes them because they are “white.” In joining the cultural genocide of Jewish experience and history, they hope to please their nonwhite colleagues who can­not find any other group of whites quite so guilt-ridden and quite so anxious to please.

But being anxious to please is not a rea­son to condemn the assimilators. In fact, it is a sign of their oppression. The desire to escape Jewish particularity and become white has dominated Jewish experience for 100 years, as hundreds of thousands of Jews, fleeing the oppression of Europe, re­sponded enthusiastically to the possibility of losing those features of personality, phys­ical appearance, or religious identity that might continue to make them, as they had been in Europe, “the target of choice.” Finding in America that blacks were play­ing the role Jews played for 18 centuries in Europe, these Jewish immigrants were all too happy to imagine there was a melting pot into which they could submerge their distinguishable features and emerge part of some universal culture. While the more so­phisticated imagined this as an American­ism with democratic values, for many other Jews it was sufficient to be “white,” which was the functional equivalent of not being “the persecuted other.” Who could blame them for seeking such an escape?

Only their children! For us, blame came easy. We saw that blacks were oppressed, we had little sense of our own history, and so we took the current reality of Jews in suburbia and imagined that not only were Jews privileged, but that others’ oppression was our fault. Thus the recurrent self-blam­ing of the victim, so deeply engrained in Jewish consciousness (“they hate us be­cause we are too exclusive, or too loud, or too pushy”) gets transformed into “they hate us because we created their suffering.” What a noble and convenient way for one generation to work out its Oedipal issues, to avoid complexity, to justify its lack of compassion for a people so traumatized by a history of oppression that it would jump into almost any scheme — from socialism to Zionism to mass assimilation — as long as it promised physical survival.

Yet the same might be said, to some degree, of every group that has arrived on these shores. The degree to which people buy into being “white” is the degree to which they are willing to forget their roots and their past. And who is willing to forget that past? Those whose past is massively painful and distorted. No wonder, then, that ruling elites in the U.S. have best suc­ceeded in offering the designation “white” to those whose material existence is one of deprivation and oppression. Coming with nothing, finding a society stratified by class, living lives of pain and frustration, they are offered whiteness as a compensa­tion, and urged to contrast their fate to that of the even more oppressed — Native Americans, blacks, etc.

But if the social construction of white­ness is a way of legitimating oppression, the transcendence of whiteness — by emphasiz­ing class or other supposedly universal fea­tures — doesn’t work either. What is needed is a way of reclaiming history, undoing the amnesia, so that these groups — blacks and Chicanos and Native Americans and Irish and Italians and Poles — can remember what they have in common, can forge links based on a common experience of oppres­sion and common desire to escape it.

Herein lies the liberatory potential of multiculturalism: To reject the fantasized concept of “whiteness” and instead recog­nize the complex stories of each cultural tradition, not privileging one group over another, but insisting on hearing and re­claiming everyone’s stories. But this is not how it functions today. Today it is merely the tool of an elite of minority intellectuals seeking to establish themselves inside an intellectual world that has too long exclud­ed them. And in that context, Jews must respond with an equally determined insis­tence that we are not white, and that those who claim we are and exclude our history and literature from the newly emerging multicultural canon are our oppressors. ■ 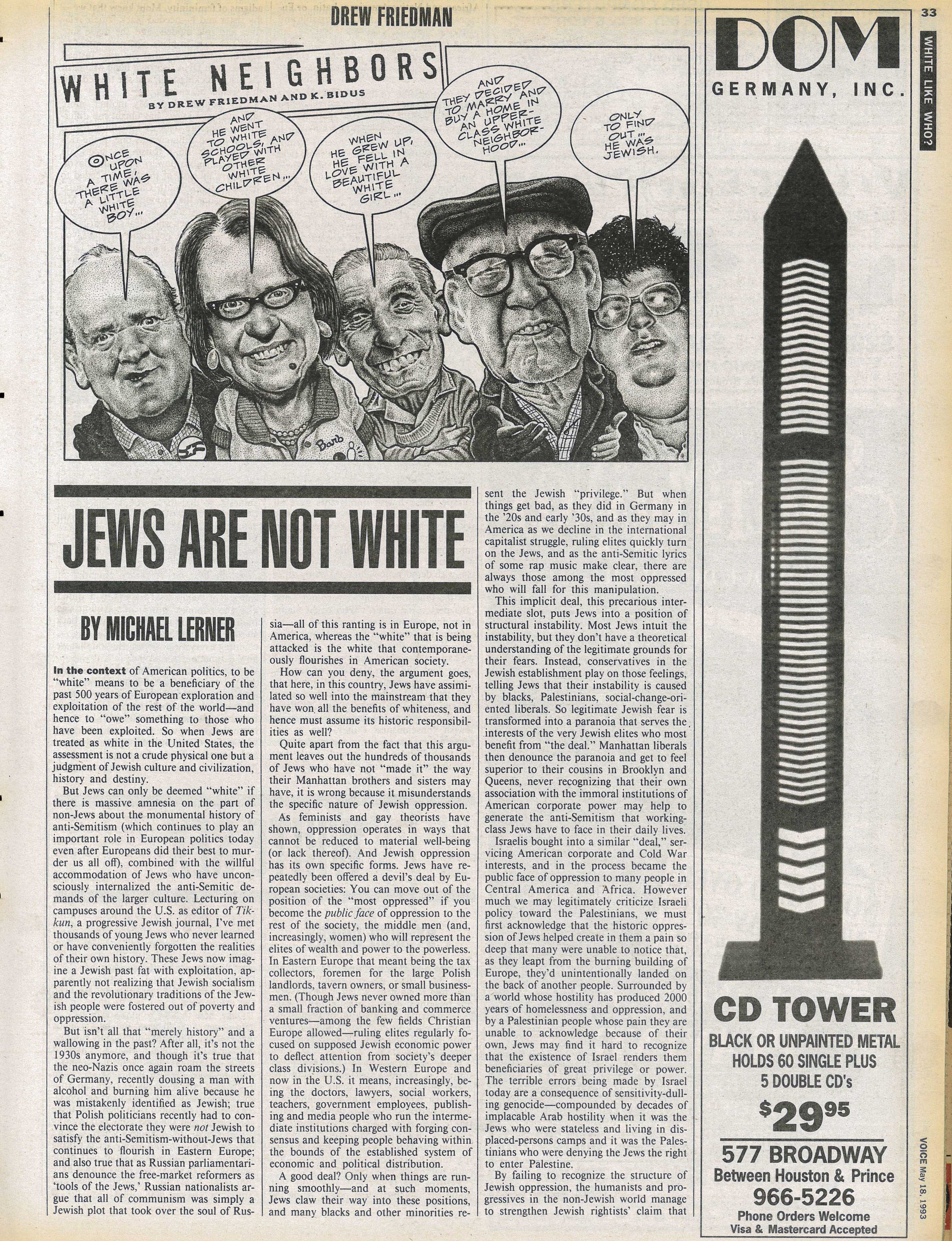 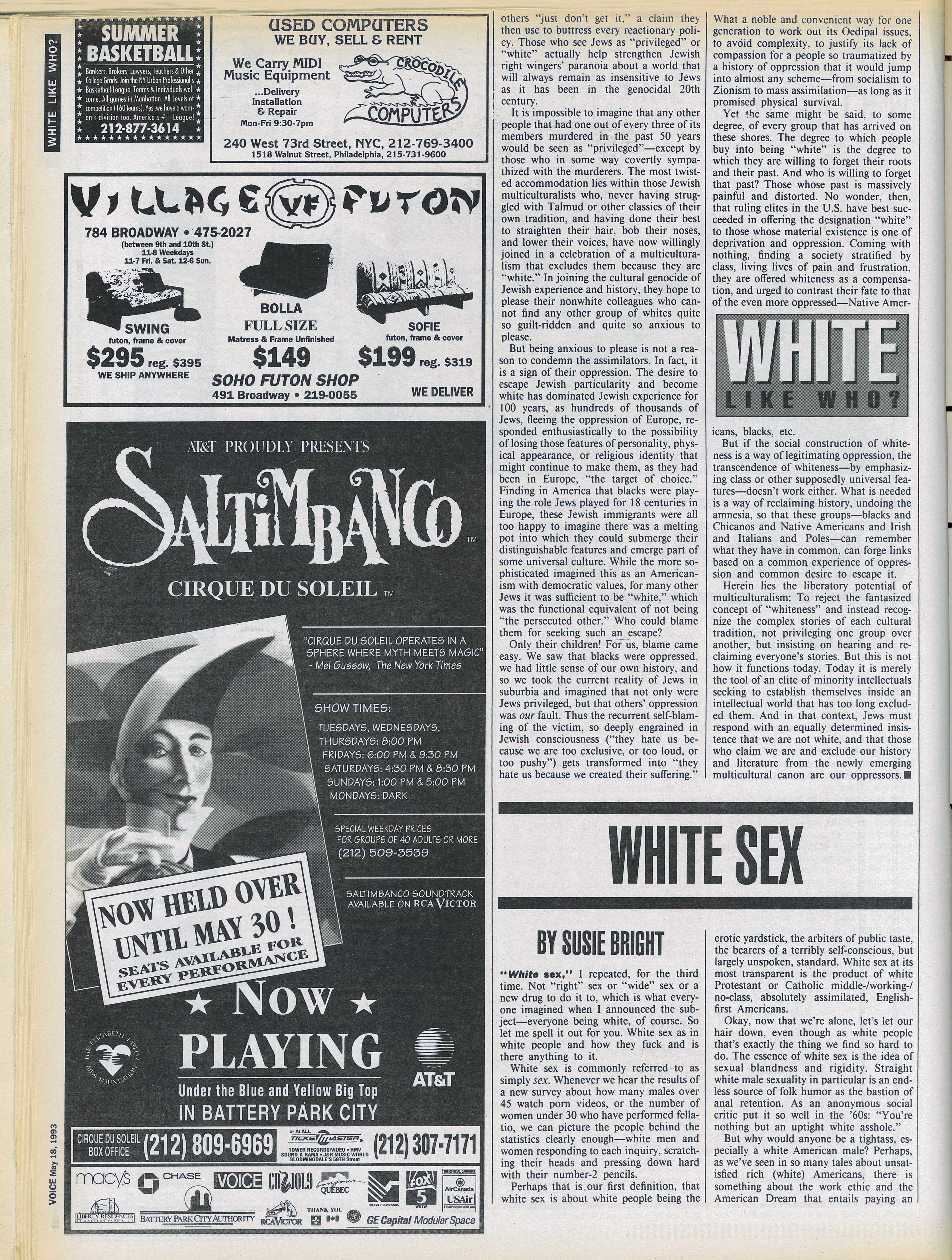