The Age of Lunacy on a Muddy Meadow

The Moon-In on the Sheep Meadow in Central Park last Sunday night came off as the world’s largest outdoor multi-media program.

Vying for spectator popularity, three huge screens representing each of the major networks stood like the ruins of a technological Stonehenge under an arc of criss-crossing searchlights. An artificial moon hung overhead where the beams converged in the mist, casting a biblical light on some 10,000 pilgrims who came to watch man’s first steps on another planet.

A new breed of fresh-air TV viewer sloshed through ankle-deep mud waiting patiently for Armstrong to plant his foot on lunar dust. Riot police were alternately engaged in watching the tube, being interviewed by extraterrestrial reporters sporting earphones with bug-like antennae twitching above their heads, and guarding against outbreaks of lunacy.

Circus tents had been erected to serve the hungry multitudes lunar hotdogs, satellite donuts, and Cosmic Cokes. Pan Am had a booth where you could sign for their first trip to the moon. And standing near to a clump of ultra-violet trees, a group of students from the School of Visual Arts, dressed like lunar versions of the Ku Klux Klan, were holding onto the fringes of a parachute and throwing a colored beachball up in the air like an Eskimo child on a blanket. For some obscure reason they called their activity a Moon Dance. 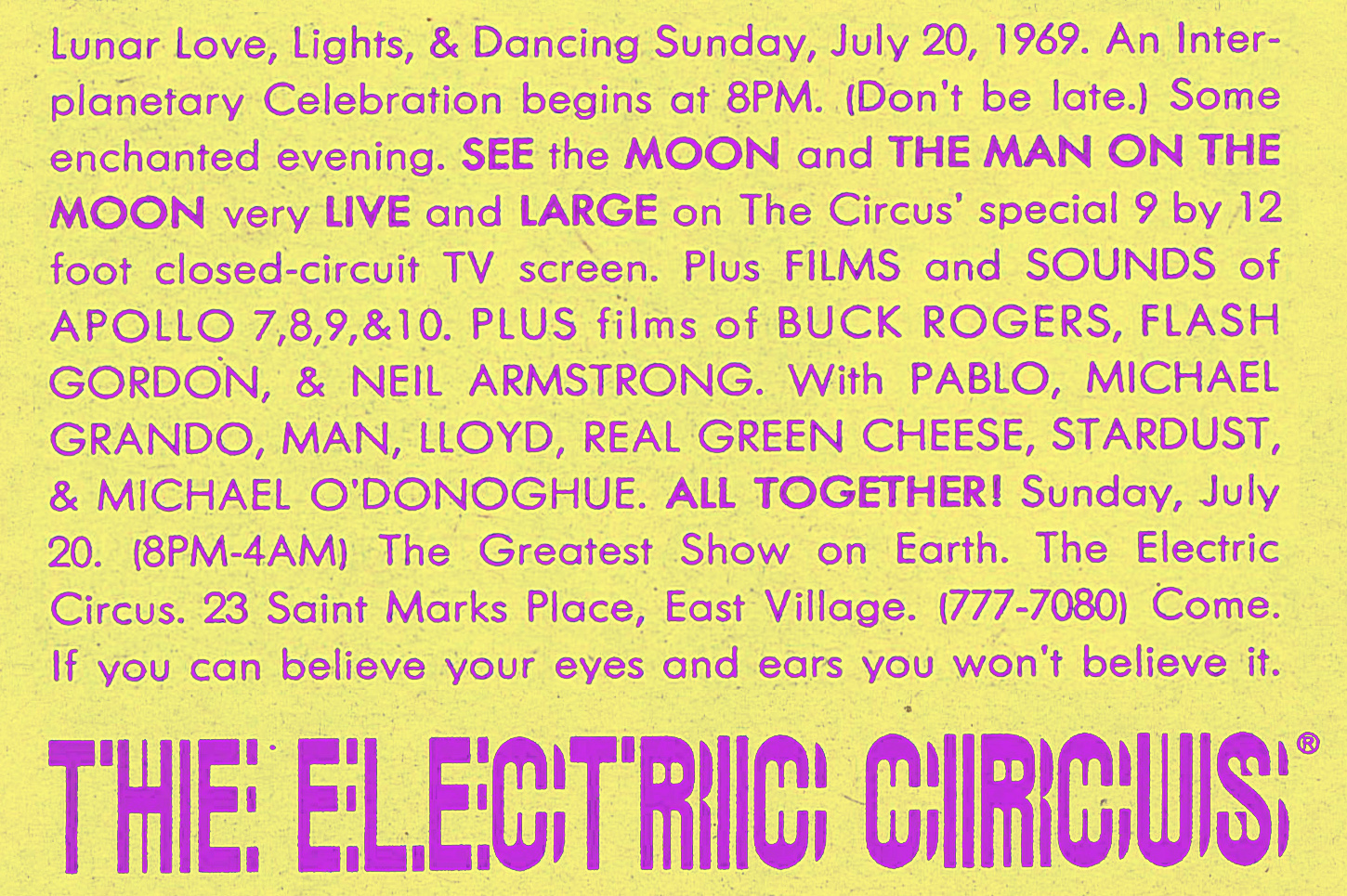 The music coming from a bandshell, embellished with the World Flag, alternated between patriotic stomps, Blue Moon foxtrots, and some groovy intergalactic vibes from the Silver Apples. On another screen, snatches of Buck Rogers adventures were rerun to put everything into perspective.

As zero hour approached I wiggled through the mobs surrounding the big screens, eavesdropping at a number of different circles of longhairs to see if their approach to the lunar landing was similar to the average interviews on television and in the press. 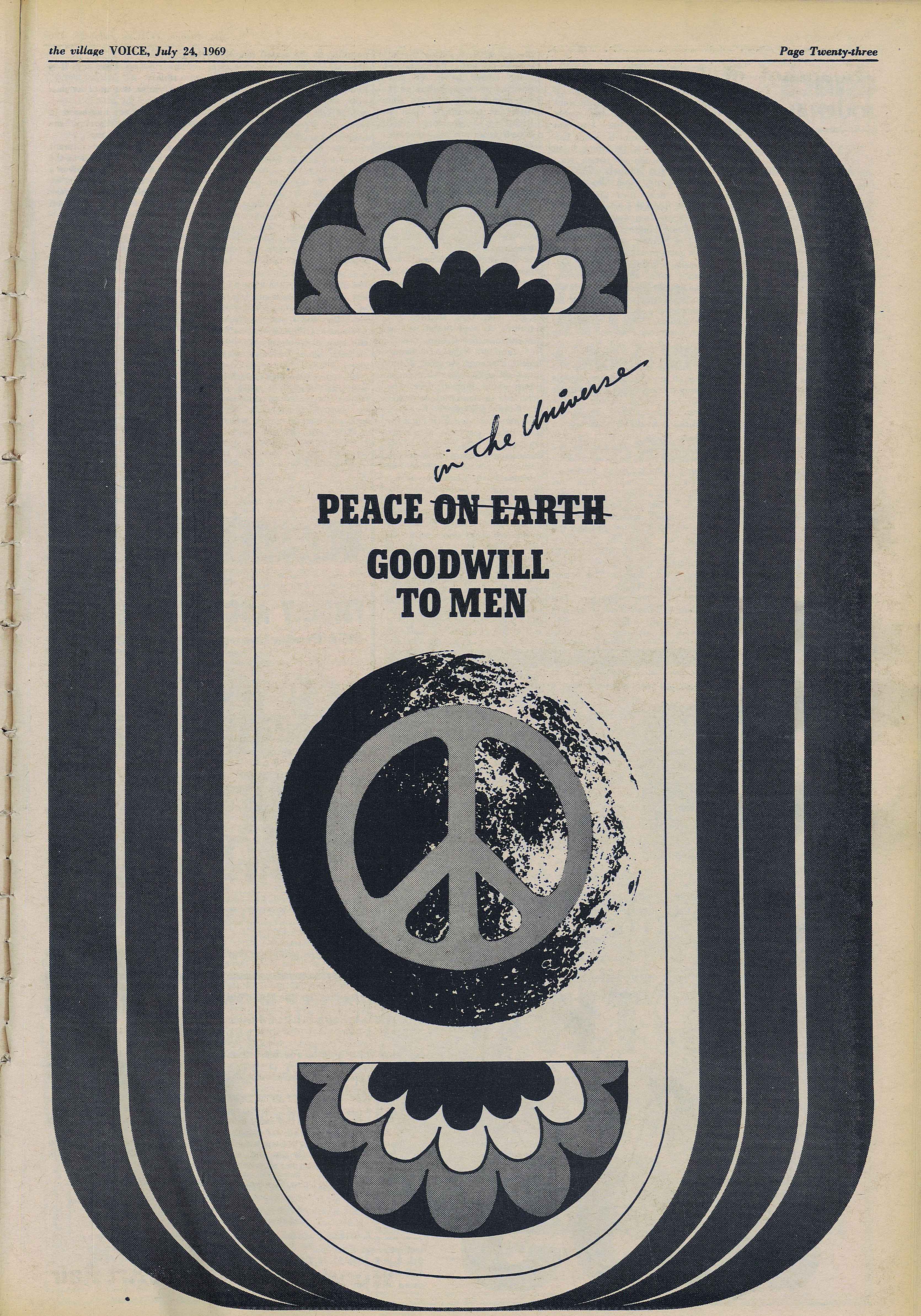 “Come on, Joey, let’s go home,” one scroungy-looking ragamuffin of a girl suggested to her partner seconds before Armstrong stepped out on the porch.

“Maybe the whole thing is simulated; maybe they’re not up there at all,” a space age speed freak with an overdose of paranoia said.

“Can you imagine what this whole thing would be like if the media had control of it — if Walter Cronkite was running it instead of those robots at Cape Kennedy,” another boy added to the fantasy. “They’d have astronauts plugging deodorants from the moon, Castro convertible interior designing in the LM, mod space suits in psychedelic colors, and they’d set the whole thing up so we could watch it on prime time TV.”

“Yeah, hey, dig it, you know with all those souvenirs they’re going to leave up there on the moon, I wonder if the Plaster Casters got together and sent up a memento of Slicky Dicky,” an over-age groupie suffering from middle-age sag wondered out loud enough so that most of the straight people in the area started edging away.

President Nixon oozed onto the screen and was met by enough boos so that no one could hear what he said.

“Excuse me, do you know what time it is?” a young man with a can of beer and an Eastern Airlines umbrella asked.

“General Motors Time or Lunar Time, baby,” a red-bearded man with a sailor’s cap and a miniature American flag clenched between his teeth inquired.

“You know it’s not going to be overly amusing when those guys get stuck up there on the moon and everybody just sits around watching them die,” a concerned young blonde worried.

“They’ll just switch on the Mets game instead,” some cynic said.

“No, you know what they’ll do? The Russians will land Luna 15 right next door and the Americans will have to hitch a ride back. Wouldn’t that be far out?” a boy with a mustache, vest, and cowboy boots said.

“If I could have a wish,” an airlines stewardess lamented, “it would be that the United Nations flag be planted on the moon instead of the American flag.” 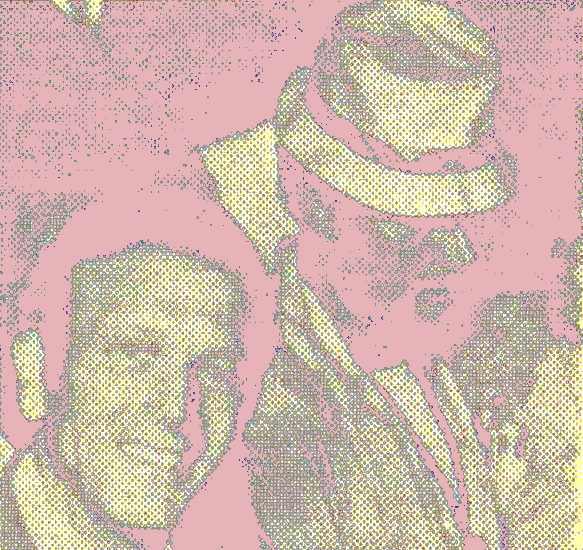 Generally when questioned about the value of the Apollo mission most of the people I talked with said that while they’d rather have the money given to people down here who need it, psychologically it was a good thing to get some distance from the Earth and be able to look back on it and realize that we all live here and we’re going to have to learn to make it together.

One Czech tourist I spoke with said the beauty of the Apollo mission was that it was like a Greek tragedy where the audience knew exactly what was coming and there were no surprises. “This landing on the moon represents the funeral for politicians,” he continued, “it proves that a team of technicians can solve our impossible problems while politicians can’t.”

“Really this whole thing is kind of a drag,” a red raincoated girl from Houston drawled, “I’m waiting for the little men from another planet to arrive.”

“I can grok it,” a sci-fi fan announced.

“Next stop Tralfalmadore,” another of the literati chimed in.

In the course of the evening I picked up a good deal of the lunar trivia that polluted almost every conversation I listened in on. For instance did you know that there is already some guy in Chile who has laid claim to the moon with the Chilean Supreme Court. Apparently when the government subsequently tried to tax him for his newly acquired real estate he told them that they’d have to survey it first.

Or that each astronaut is traditionally given a half of a dollar bill before he leaves on a space voyage and that he must produce it after splashdown as proof that he is the same man who left and not some imposter. 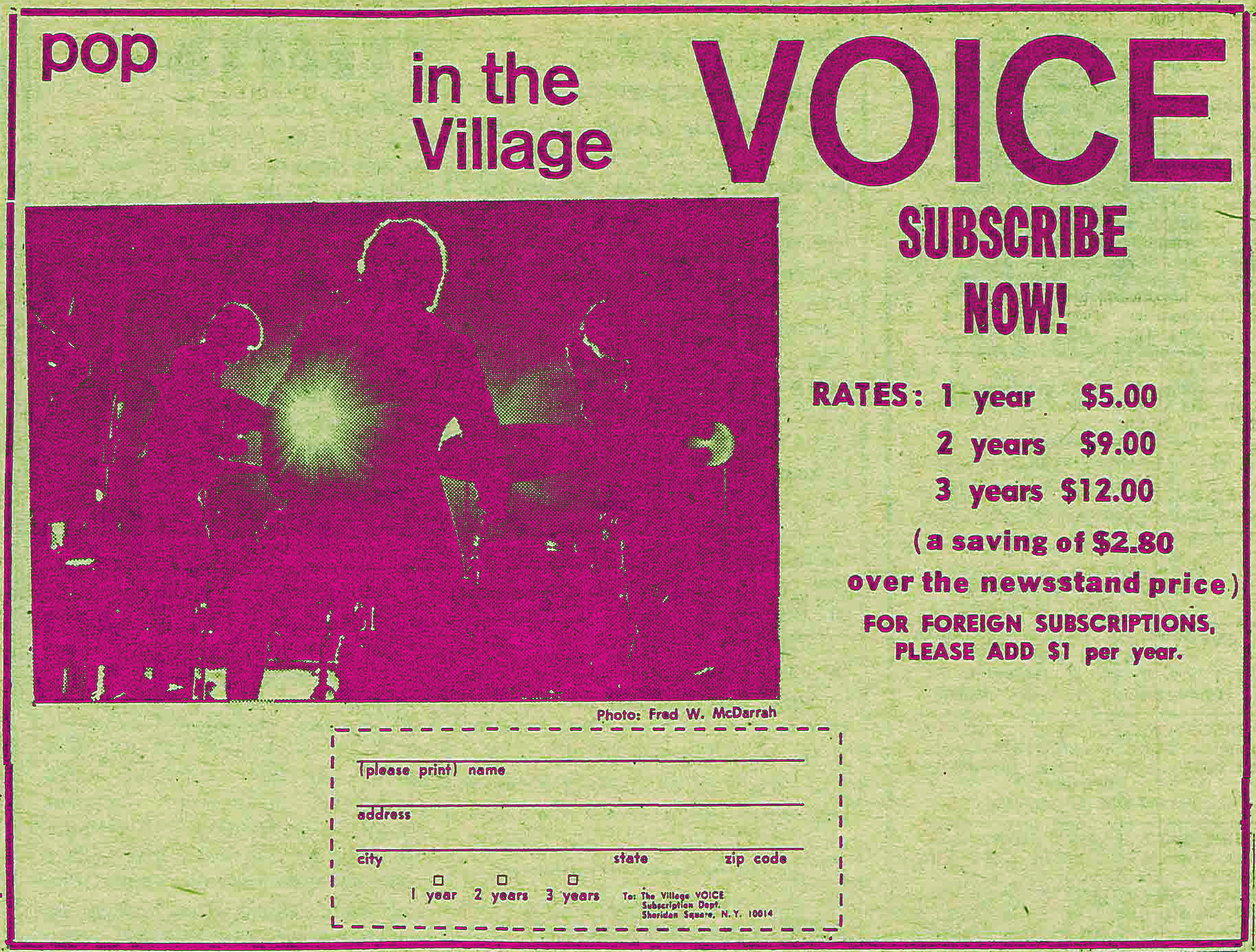 Or that President Nixon made the call to the moon collect.

Or that the Russians were the first to put a man and a woman into space together stimulating world-wide speculation about weightless erotica.

Finally no one could ignore the new field of space symbolism. The fact that we landed in the Sea of Tranquility while the Russians crashed in the Sea of Crises; that the American Eagle lost its lightning on the way to the moon; that Armstrong anthropomorphized the landing site alternately as a giant footstep and a football field; that space flight terminology such as “lunar insertion” appears blatantly sexual in tone; and that Extra Vehicular Activity (EVA) is strikingly similar to the name of a well known biblical figurine.

Unable to grasp in fullness the implications of the cosmic event they were watching on their silver screens, New Yorkers, not unlike fellow earthlings, retreated to tried and tested forms of celebration. Some yelled hoorah, others threw their caps in the air, large numbers kept long vigils, a few tried to learn a new technological language, and those in Central Park fell back on the “In” form of rejoicing — of be-in, love-in, and smoke-in fame — in order to be as up-to-date as possible in the new Age of Lunacy. Of course from the moon it all must have looked fairly foolish. 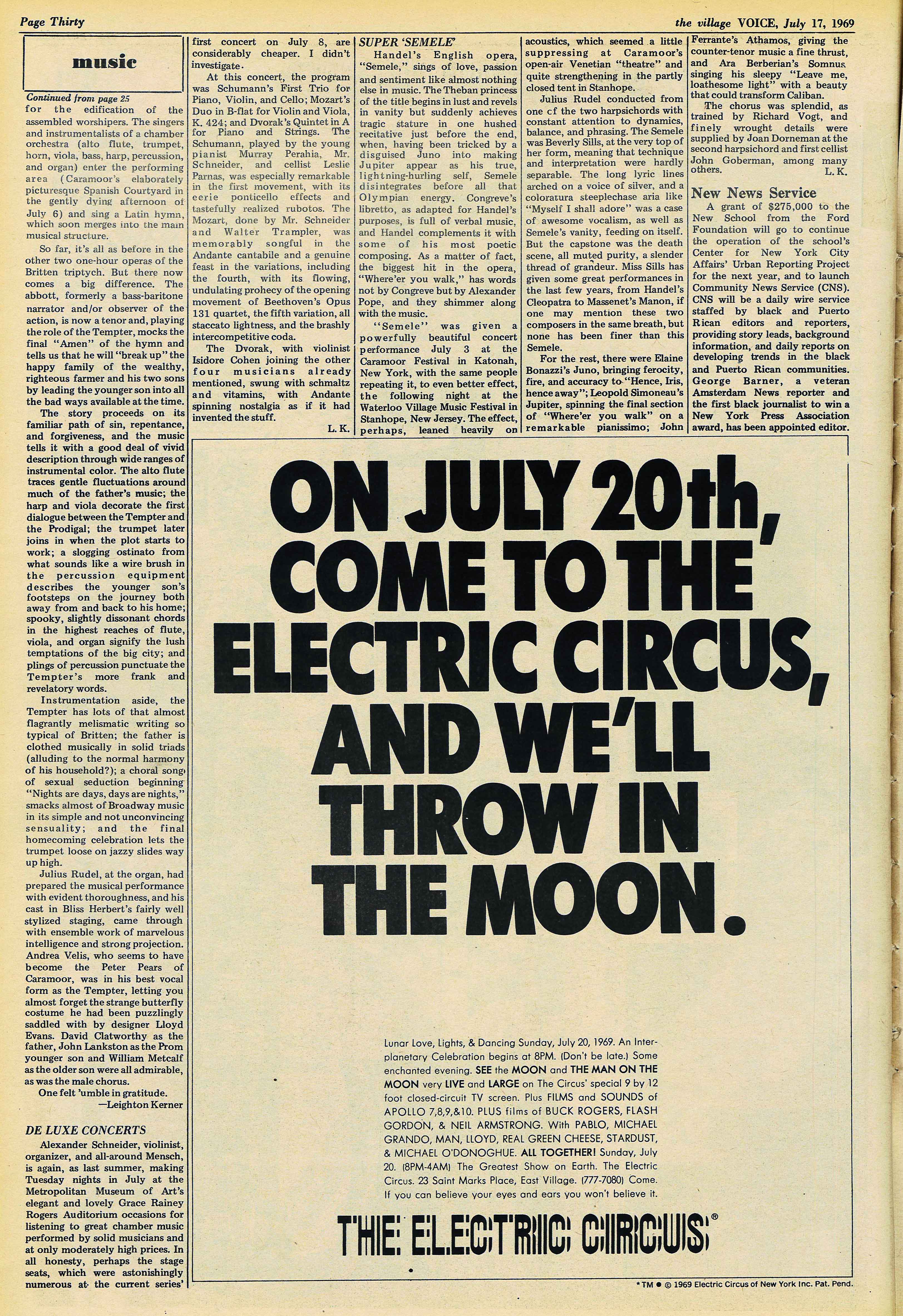 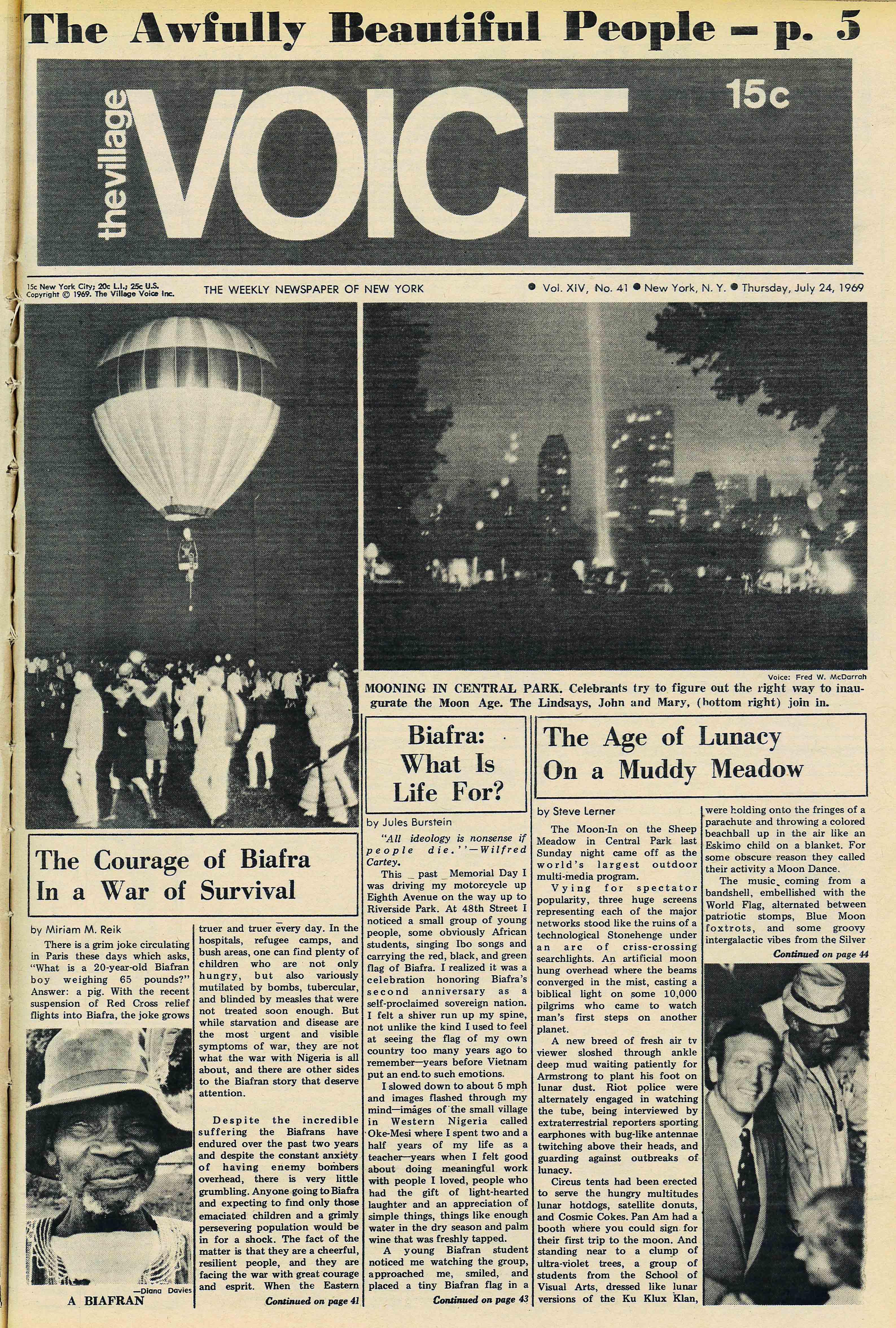 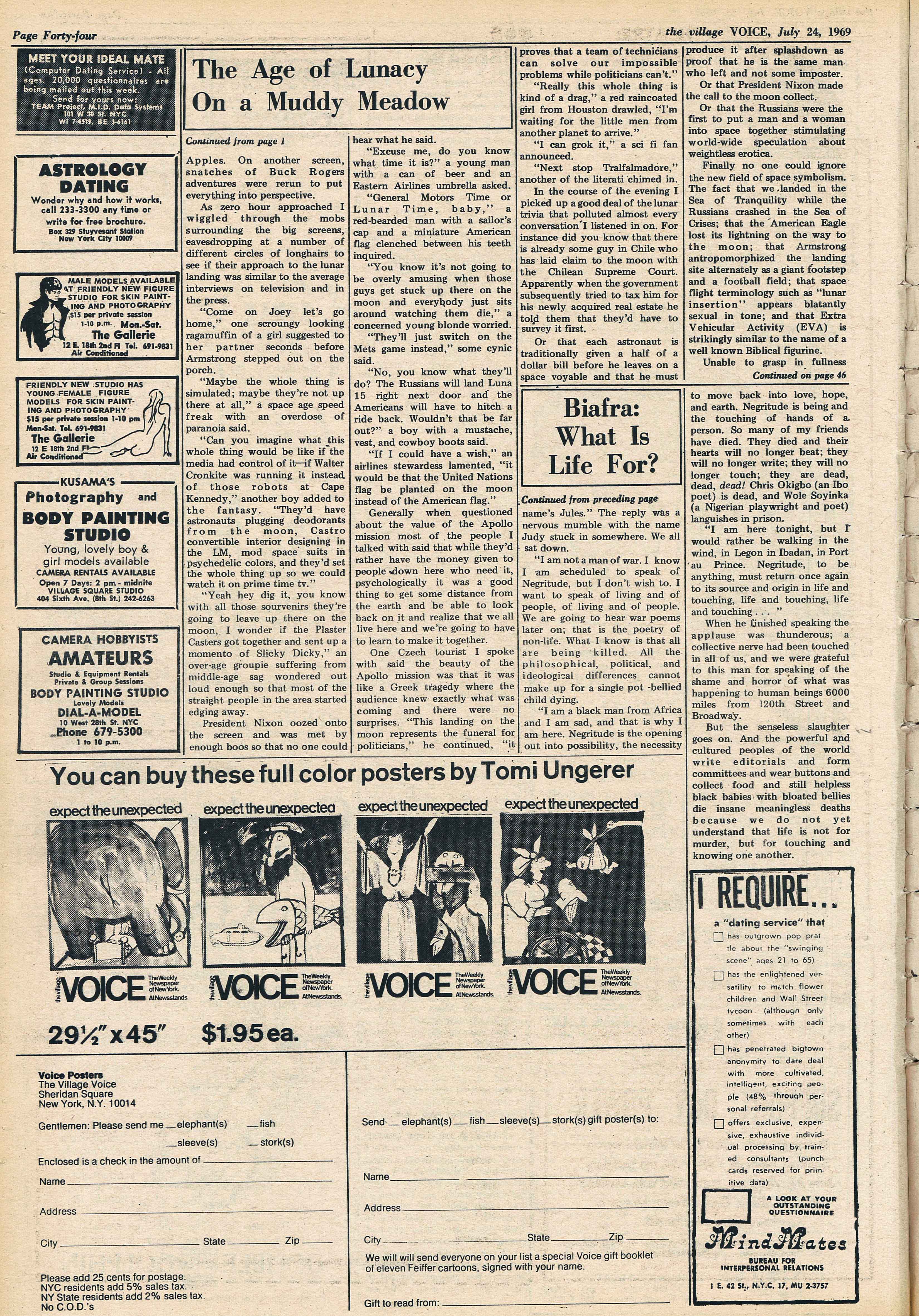 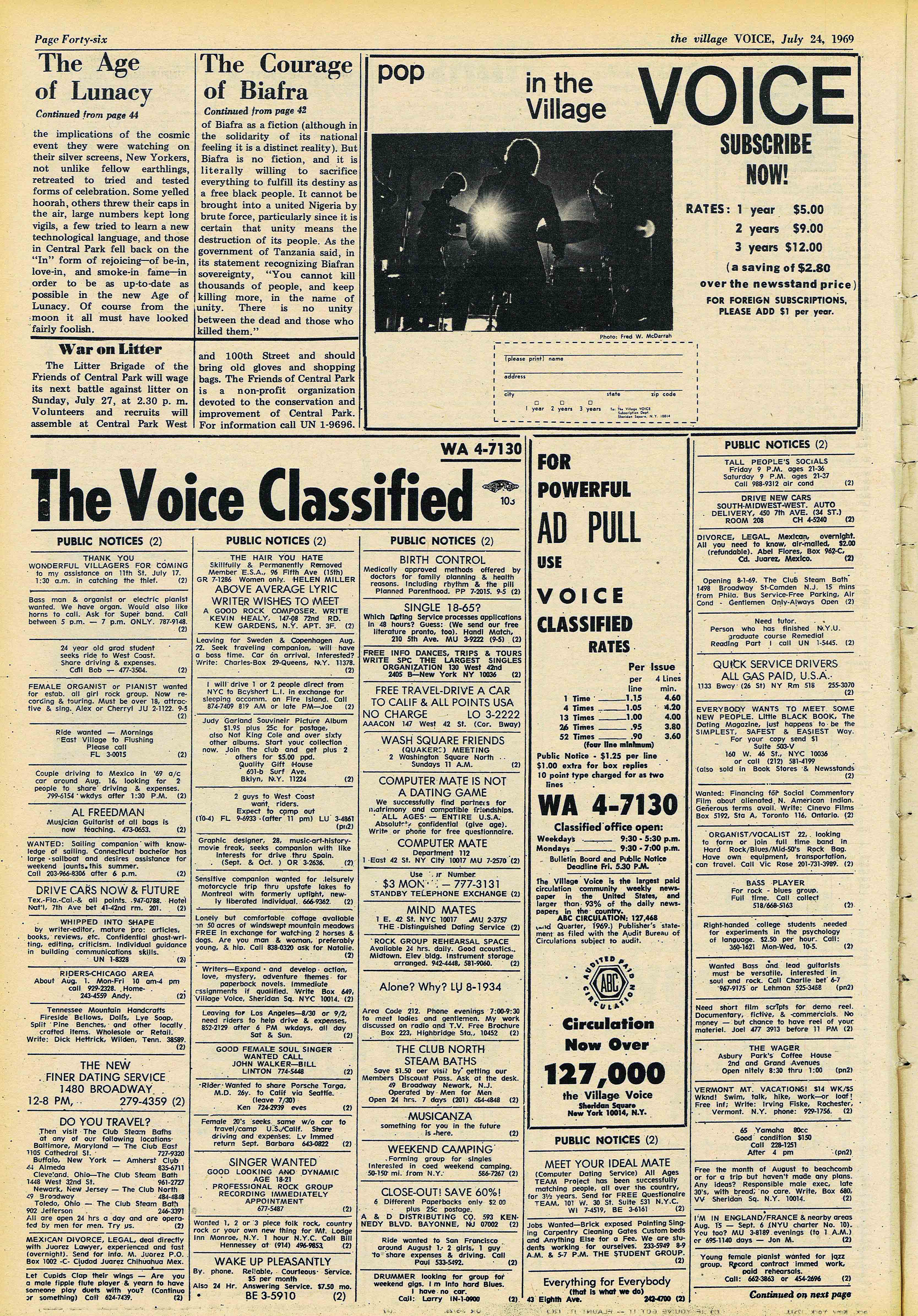