When the Cannes Film Festival hailed Easy Rider as a poetic and perceptive vision of American life, I didn’t exactly hold my breath with anticipation. Motorcycles, materialism, misanthropy, and murder have long served as adequate cinematic correlatives of American life for Europeans, and never more so than in this year of law and order on Hamburger Hill. That the American Dream has come to resemble a quickie production out of American-International does not in and of itself transform every vavoom on the screen into a meaningful statement.

As it turns out, however, Easy Rider displays an assortment of excellences that lifts it above the run and ruck of its genre. First and foremost is the sterling performance of Jack Nicholson as George Hanson, a refreshingly civilized creature of Southern Comfort and interplanetary fantasies. Easy Rider comes to life with Nicholson’s first hung-over entrance in a Deep South dungeon.

We have been traversing the open road with Peter Fonda and Dennis Hopper on their defiantly nonconformist bikes, and we have been treated to some wide-angle distortions of drug-trafficking, some cut-rate spirituality in a hippie commune, some cryptic conversation on the sanctity of living off the soil, and an endless array of roadside traveling shots lyrically photographed by Laszlo Kovacs. Nothing too extreme, mind you, just little bits and pieces of sociological petit point interspersed with musical strands fashioned by Steppenwolf, the Byrds, the Band, the Holy Modal Rounders, Fraternity of Man, the Jimi Hendrix Experience, Little Eva, the Electric Prunes, the Electric Flag, an American Music Band, and Roger McGuinn from compositions by Hoyt Axton, Mars Bonfire, Gerry Goffin and Carole King, Jaime Robbie Robertson, Antonia Duren, Elliot Ingber and Larry Wagner, Jack Keller, David Axelrod, Mike Bloomfield, Bob Dylan, and Roger McGuinn or Richard Goldstein where art thou with thy Pop Eye and Folk and Rock Ear. With all the rousingly rhythmic revelry and splendiferously scenic motorcycling, Easy Rider comes to resemble a perpetual pre-credit sequence, but reasonably pleasant withal. 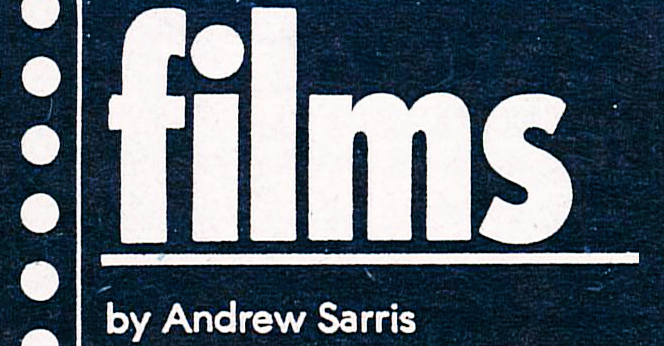 Unfortunately, there is something depressingly deja vu about the moralistic view of America from a motorcycle. And after about the 20th man-cool mumble, the equation of anti-conformity with anti-conversation seems too facile by far. Also, Peter Fonda and Dennis Hopper leave a great deal to be desired as allegedly affecting figures of alienation, Fonda being irritatingly inert as ever and Hopper annoyingly mannered behind the bushy mustache of a character performance. Along the way, Warren Finnerty’s fecund farmer and Luke Askew’s hirsute hitchhiker play off to advantage against the self-righteous taciturnity of Fonda and Hopper, but not until Jack Nicholson enters the picture with his drawling delivery of good lines can we get involved beyond the level of lethargic lyricism. Peter Fonda, Dennis Hopper, and Terry Southern are credited with the script, and Dennis Hopper with the direction, but see Easy Rider for Nicholson’s performance, easily the best of the year so far, and leave the LSD trips and such to the collectors of mod mannerisms.

I don’t want to draw any aesthetically conservative point from Nicholson’s pre-eminence in Easy Rider. It is too easy to say that camera tricks and dazzling cuts are no substitute for full-bodied characterizations. Too easy and too misleading. We are simply too close to the popular cinema of today to read it correctly. If American movies seem today too eclectic, too derivative, and too mannered, so did they seem back in the ’20s, the ’30s, the ’40s, and the ’50s. The nouvelle vague tricks and Bergman-Fellini-Antonioni mannerisms are no more voguish today than the UFA German Expressionist and Soviet montage tricks were in the late ’20s and early ’30s. But out of all the mimicry of earlier times emerged very personal styles, and there is no reason to believe that the same thing will not happen again and again. Hence, beware of all generalizations including this one, perhaps especially this one, because it is just remotely possible that after all the false cries of doom, the cinema might actually be racing to the creative standstill so long predicted for it. But I doubt it. It is not the medium that is most likely to get old, tired, and cynical, but its aging metaphysically confused critics. This particular critic has never felt younger in his life. 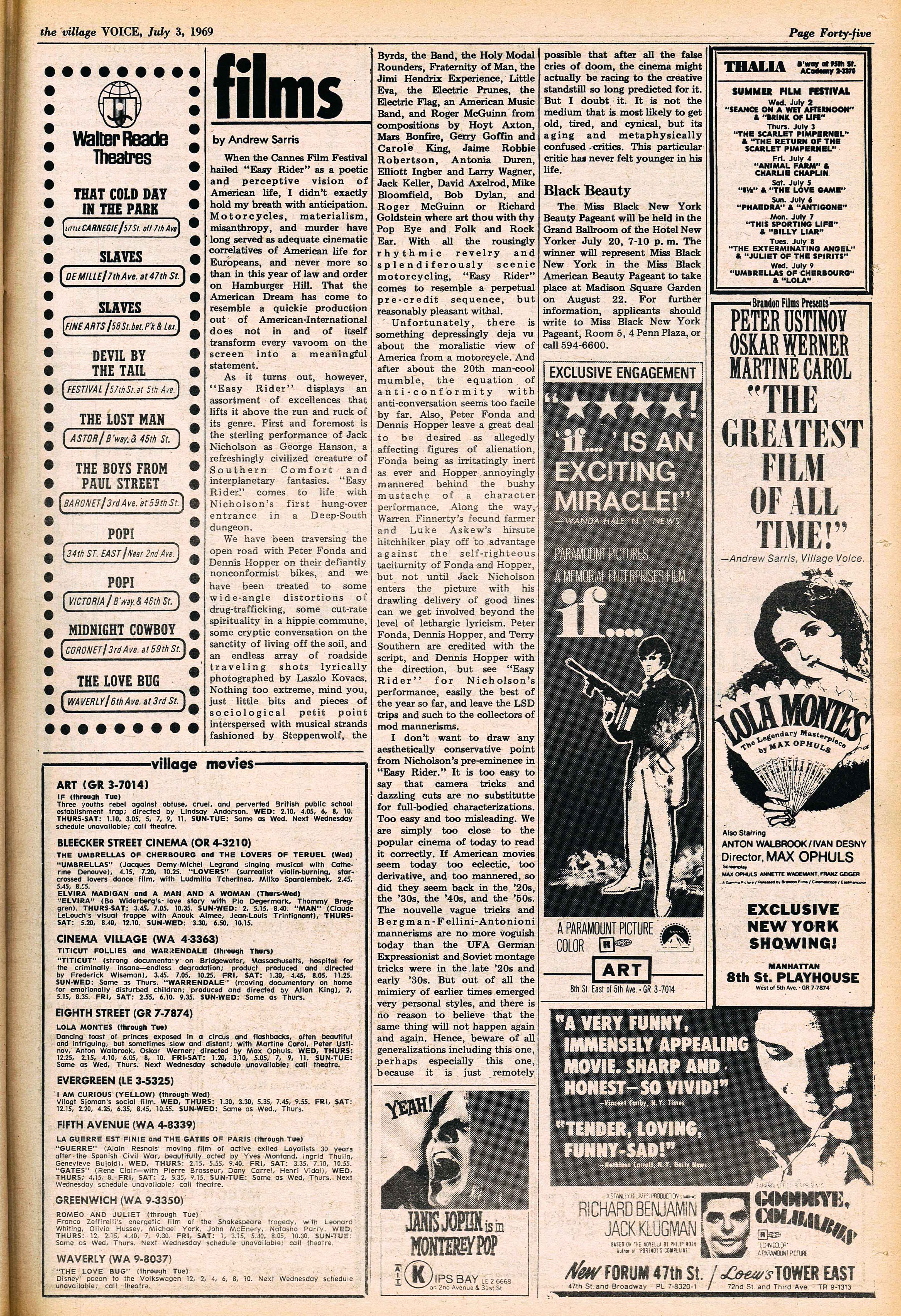 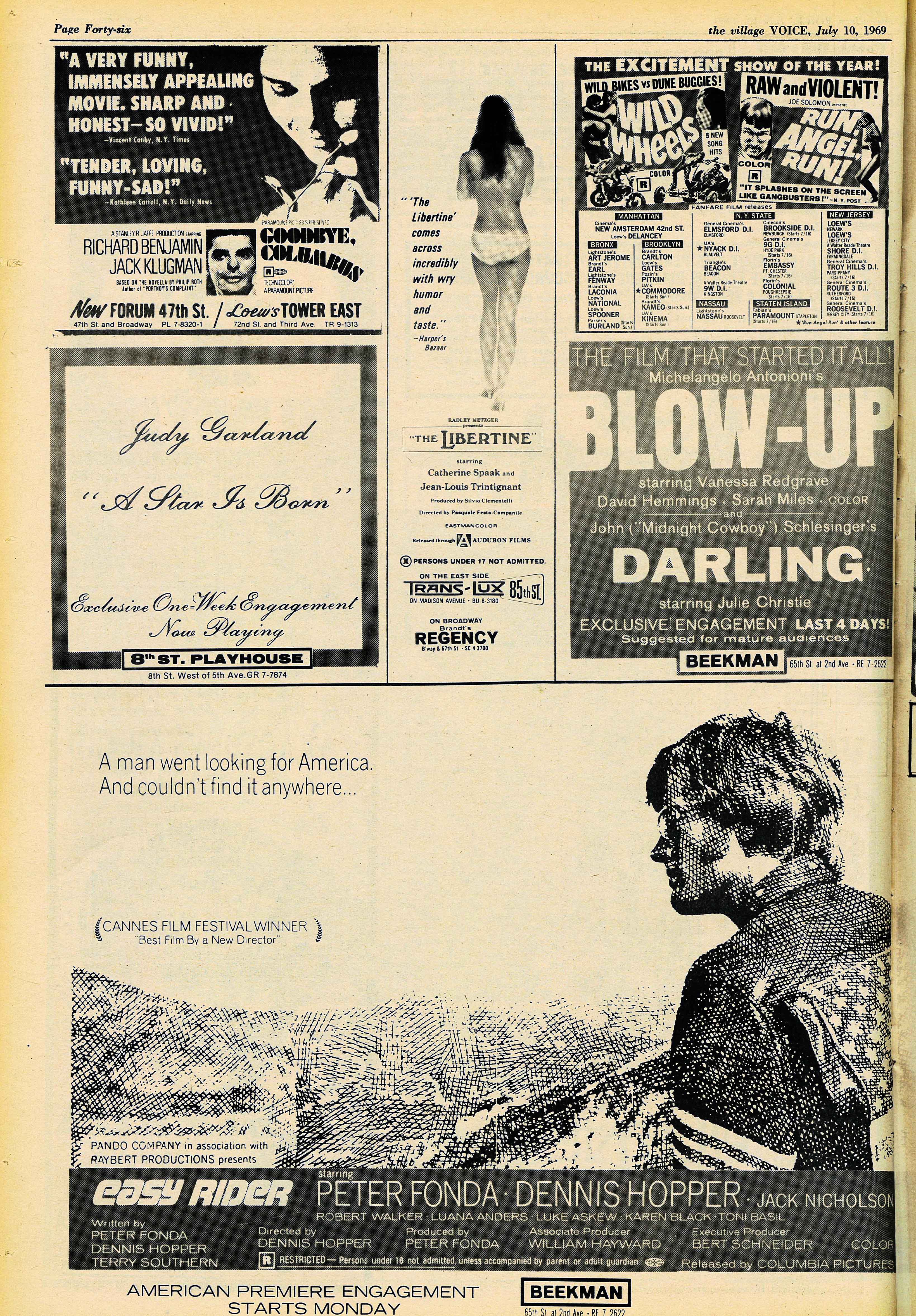