They keep assuring us she’s on her way. Her assistants buzz around us. “Girl­friend’s always late. She on C.P. time.” “The Devil gonna be selling Sno-Kones ’fore that bitch get here.” Finally, a bespec­tacled, porcine androgyne with a pungent jheri curl even in his beard emerges from the entourage and laughs at my complaints. “She waited long enough for your asses, now it’s your turn,” he says, snapping his fingers directly in front of my nose, in delib­erate violation of my personal space.

MC: The International Center for Fabulous­ness is proud to introduce our next guest. She will be giving one of her legendary lectures as the keynote address of our annu­al three-day conference/drag ball. You’ll note that the speech is listed in the program under the title, “Git Out My Face, Bitch: A Black Gay Queen Reads Your Ass.” One of only three nominees for Miss Attitude, she’s regarded by those who don’t know better as the authority on black gay life, and was recently appointed the James Baldwin Professor of African American Effeminacy at Harvard. Her book, Don’t Play Me, Play Lotto, You Might Win, has stayed on the New York Times bestseller list for over 50 weeks and has millions of white suburban teenagers who once idolized Chuck D snapping their fingers and walking around with their hands on their hips. Ladies and gentlemen, gentlemen dressed as ladies, and women dressed as wimmin, a queen who needs no introduction. Please admit that it’s all about Miss Banji Realness.

Applause. Whistling. That Arsenio dog­barking noise. Banji takes her time ap­proaching the podium, the usual combina­tion of overness and scorn hanging fashionably from her face. She’s a very tall, light-skinned man with finger waves and beaucoup-de-silver jewelry complementing her ribbed black turtleneck bodysuit. She takes a sip of the Cosmopolitan provided for in her contract. Her bracelets jangle like wind chimes as she shuffles her notes on the lectern.

BANJI: A few weeks ago, this very sweet white girl — as opposed to the obnoxious ones who try to tell you what black people are like, meanwhile they never even watched Good Times to find out what FAKE Negroes look like — this very sweet white girl asks me, “So, Miss Realness, you’re gay and black … what’s that like?” I was actu­ally relieved to hear this question phrased so innocently, I’ve heard it alluded to indeli­cately so often. I rather cryptically said, “You can see better.” Naturally, she wasn’t satisfied.

“See what better?” she asked.

Miss Realness, hand on hip, smirks and looks at the ceiling.

Now any gay person can see the homo­phobia in heterosexuals, but Miss Thing and her ilk have firsthand experience seeing homophobia and shadism from African Americans, racism and homophobia from gays, homophobia, racism, shadism, and a side of cole slaw from other black gay men. You can even see the misogyny that holds it all together.

She ain’t had no clue. “What do you mean, homophobia in the gay community?”

“Come on, Twinkletoes. Do flaming queens get your dick hard?”

“I hope they don’t act straight when you get them in bed, honey.”

You could’ve heard a mosquito fart. Then she changes the subject. “What was that about misogyny?”

Miss Realness delivers a withering look to the audience.

I told her, it’s all about penetration, dar­ling. In this messiness we call society, the penetrators think they’re superior to the penetratees. They believe desire for men, inseparable from desire for penetration, is an exclusively female and therefore inferior trait. All these motherfuckers walking around think they’re real men ’cause they don’t get fucked and they don’t ack like no queen. Honey, you ain’t even thought about what it means to be a real man till you’ve bled all over the sidewalk ’cause some fool hit you with a baseball bat. Gonna tell me you’re a real man when you ain’t questioned the definition of masculin­ity that gets handed down from absent fa­ther to future wife abuser to noncommuni­cative couch potato? Na-aah, honey, homo don’t play that.

Realness wags her extended index finger at the audience.

I just don’t have no patience for arrogant motherfuckers who don’t appreciate what it is to risk death to love as they please. After that one, Goldilocks’s jaw dropped.

“You seem to have a lot of anger,” she whined.

I rolled my eyes and replied, “When your white gay brothers shun your ass for being black and your black brothers shun your ass for being gay, there’s a certain point where you just stop taking shit. It can take a long time, though. Some people I know are eating three meals a day in a restaurant called Chez Shit. Waiters of all denomina­tions come up one after the other saying, ‘My name is whatever, I’ll be giving you shit today. Our specials are Shit With Mush­rooms in a Tomato Cream Sauce, Shit Flor­entine Sautéed in Garlic, Grilled Shit With Ricotta Cheese and Pesto Spread on Toast­ed Sourdough …” They throw so many fancy ingredients on top of their shit that it starts sounding good, and then you’re, like, sauntering down the line at life’s buffet thinking: ‘Lobster Thermidor? Nah. Filet mignon? No. Hey! Could I get some of that Bowel Movement Au Jus?’

Luckily for me, I could never hide in no damn closet. I can’t hide my black ass and as soon as I open my mouth, I’m a faggot. So I have to defend myself, and if it can’t be with fists it’ll be words. I don’t need people who be igging my ass dictating my values. And that goes for straight-acting homosex­uals, too. I make up my own values, and you know Girlfriend values her makeup.

“I must say you come on pretty strong. Why do you think you have such a loyal following?” she axed me, as if there were a need to axe. By now I’m about to rip her head off. “’Cause I tell the truth,” I said. “And deep down, people need to hear the truth, and not some half-truth that makes them feel safe. They need to hear the truth that wrecks them, that makes them run home screamin’ to they Mama. And when you tell the no-frills truth, they have to respect it. My girl Essex Hemphill calls it ‘the ass-splitting truth.’ So go ahead, bitch. Split my butt open with that truth dildo.”

Held behind the velvet ropes during Realness’s previous appearance as a nomi­nee, I was determined to get on the list to see her at the awards ceremony. The buzz was that she was a shoo-in. After bribing the publicist and the thin party promoters in crushed-velvet shirts who function as her security guards, I squeezed into the back of’ the auditorium.

HOST: Welcome to the fifth annual Miss Attitude Awards. I’m Marcal D’Johnson. Each year, SNAP, the Society of Nubian American Pansies, doles out another award to the Queen of Queens, she who most exemplifies the giving of face. The winner must have poise, grace, dignity, and a fierce look. We’re not talking about a certain rough ’ho who will remain nameless even though her name is Devonell Williams who we had to disqualify for working at a certain store that will remain nameless although it is called Woolworth’s.

CONTESTANT 1: Would you just shut up and give me the goddamn award so I can make my 1 a.m. appointment?

D’JOHNSON: (To Contestant #1) So they have a curfew at your welfare hotel now?

CONTESTANT 1: (Doing side-to-side head moves) Like I give a shit about winning your two-dollar plaque. I could go down to K mart and buy one myself.

CONTESTANT 1: Well you would know, bitch.

D’JOHNSON: And now the moment you’ve been waiting for. The envelope, please. And the winner is … Miss Banji Realness! (Ap­plause. Pause.) Miss Realness couldn’t be with us this evening, because, as her per­sonal assistant’s personal assistant tells us, she had “better things to do.” She did, however, send us this videotaped accep­tance speech. A video monitor springs to life, and we see Banji talking on the phone. After a few minutes she looks at the camera contemp­tuously, and sucks her teeth. 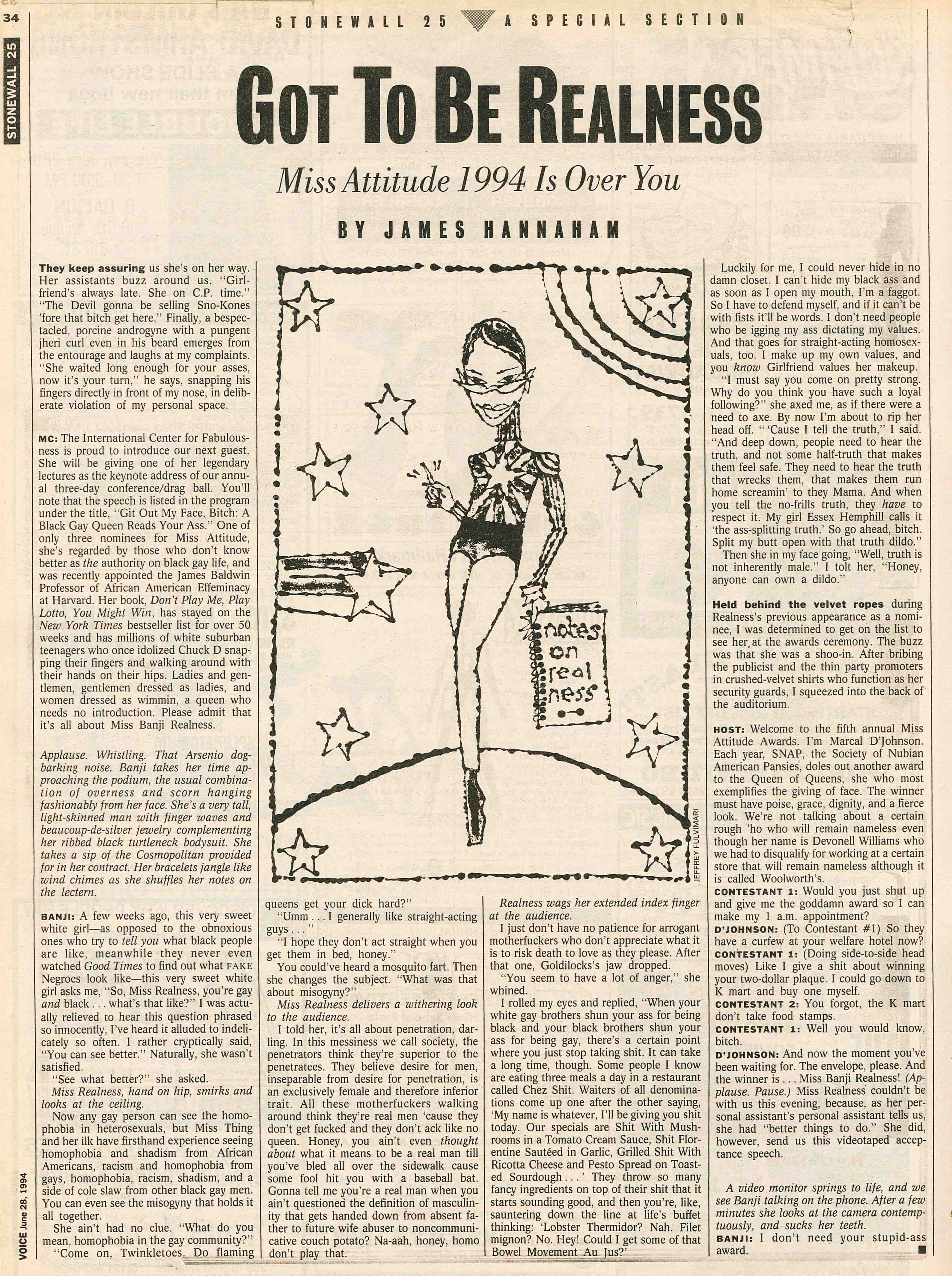