Sheridan Square this weekend looked like something from a William Burroughs novel as the sudden specter of “gay power” erected its brazen head and spat out a fairy tale the likes of which the area has never seen.

The forces of faggotry, spurred by a Friday night raid on one of the city’s largest, most popular, and longest lived gay bars, the Stonewall Inn, rallied Saturday night in an unprecedented protest against the raid and continued Sunday night to assert presence, possibility, and pride until the early hours of Monday morning. “I’m a faggot, and I’m proud of it!” “Gay Power!” “I like boys!” — these and many other slogans were heard all three nights as the show of force by the city’s finery met the force of the city’s finest. The result was a kind of liberation, as the gay brigade emerged from the bars, back rooms, and bedrooms of the Village and became street people.

Cops entered the Stonewall for the second time in a week just before midnight on Friday. It began as a small raid — only two patrolmen, two detectives, and two policewomen were involved. But as the patrons trapped inside were released one by one, a crowd started to gather on the street. It was initially a festive gathering, composed mostly of Stonewall boys who were waiting around for friends still inside or to see what was going to happen. Cheers would go up as favorites would emerge from the door, strike a pose, and swish by the detective with a “Hello there, fella.” The stars were in their element. Wrists were limp, hair was primped, and reactions to the applause were classic. “I gave them the gay power bit, and they loved it, girls.” “Have you seen Maxine? Where is my wife — I told her not to go far.”

Suddenly the paddywagon arrived and the mood of the crowd changed. Three of the more blatant queens — in full drag — were loaded inside, along with the bartender and doorman, to a chorus of catcalls and boos from the crowd. A cry went up to push the paddywagon over, but it drove away before anything could happen. With its exit, the action waned momentarily. The next person to come out was a dyke, and she put up a struggle — from car to door to car again. It was at that moment that the scene became explosive. Limp wrists were forgotten. Beer cans and bottles were heaved at the windows, and a rain of coins descended on the cops. At the height of the action, a bearded figure was plucked from the crowd and dragged inside. It was Dave Van Ronk, who had come from the Lion’s Head to see what was going on. He was later charged with having thrown an object at the police.

Three cops were necessary to get Van Ronk away from the crowd and into the Stonewall. The exit left no cops on the street, and almost by signal the crowd erupted into cobblestone and bottle heaving. The reaction was solid: they were pissed. The trashcan I was standing on was nearly yanked out from under me as a kid tried to grab it for use in the window-smashing melee. From nowhere came an uprooted parking meter — used as a battering ram on the Stonewall door. I heard several cries of “Let’s get some gas,” but the blaze of flame which soon appeared in the window of the Stonewall was still a shock. As the wood barrier behind the glass was beaten open, the cops inside turned a firehose on the crowd. Several kids took the opportunity to cavort in the spray, and their momentary glee served to stave off what was rapidly becoming a full-scale attack. By the time the fags were able to regroup forces and come up with another assault, several carloads of police reinforcements had arrived, and in minutes the streets were clear.

A visit to the Sixth Precinct revealed the fact that 13 persons had been arrested on charges which ranged from Van Ronk’s felonious assault of a police officer to the owners’ illegal sale and storage of alcoholic beverages without a license. Two police officers had been injured in the battle with the crowd. By the time the last cop was off the street Saturday morning, a sign was going up announcing that the Stonewall would reopen that night. It did.

Protest set the tone for “gay power” activities on Saturday. The afternoon was spent boarding up the windows of the Stonewall and chalking them with signs of the new revolution: “We Are Open,” “There is all college boys and girls in here,” “Support Gay Power — C’mon in, girls,” “Insp. Smyth looted our: money, jukebox, cigarette mach[ine], telephones, safe, cash register, and the boys tips.” Among the slogans were two carefully clipped and bordered copies of the Daily News story about the previous night’s events, which was anything but kind to the gay cause.

The real action Saturday was that night in the street. Friday night’s crowd had returned and was being led in “gay power” cheers by a group of gay cheerleaders. “We are the Stonewall girls/ We wear our hair in curls/ We have no underwear/ We show our pubic hairs!” The crowd was gathered across the street from the Stonewall and was growing with additions of onlookers, Eastsiders, and rough street people who saw a chance for a little action. Though dress had changed from Friday night’s gayery to Saturday night street clothes, the scene was a command performance for queers. If Friday night had been pick-up night, Saturday was date night. Hand-holding, kissing, and posing accented each of the cheers with a homosexual liberation that had appeared only fleetingly on the street before. One-liners were as practiced as if they had been used for years. “I just want you all to know,” quipped a platinum blond with obvious glee, “that sometimes being homosexual is a big pain in the ass.” Another allowed as how he had become a “left-deviationist.” And on and on.

The quasi-political tone of the street scene was looked upon with disdain by some, for radio news announcements about the previous night’s “gay power” chaos had brought half of Fire Island’s Cherry Grove running back to home base to see what they had left behind. The generation gap existed even here. Older boys had strained looks on their faces and talked in concerned whispers as they watched the up-and-coming generation take being gay and flaunt it before the masses.

As the “gay power” chants on the street rose in frequency and volume, the crowd grew restless. The front of the Stonewall was losing its attraction, despite efforts by the owners to talk the crowd back into the club. “C’mon in and see what da pigs done to us,” they growled. “We’re honest businessmen here. There ain’t nuttin bein’ done wrong in dis place. Everybody come and see.”

The people on the street were not to be coerced. “Let’s go down the street and see what’s happening, girls,” someone yelled. And down the street went the crowd, smack into the Tactical Patrol Force, who had been called earlier to disperse the crowd and were walking west on Christopher from Sixth Avenue. Formed in a line, the TPF swept the crowd back to the corner of Waverly Place, where they stopped. A stagnant situation there brought on some gay tomfoolery in the line of helmeted and club-carrying cops. Just as the line got into a full kick routine, the TPF advanced again and cleared the crowd of screaming gay powerites down Christopher to Seventh Avenue. The street and park were then held from both ends, and no one was allowed to enter — naturally causing a fall-off in normal Saturday night business, even at the straight Lion’s Head and 55. The TPF positions in and around the square were held with only minor incident — one busted head and a number of scattered arrests — while the cops amused themselves by arbitrarily breaking up small groups of people up and down the avenue. The crowd finally dispersed around 3.30 a.m. The TPF had come and they had conquered, but Sunday was already there, and it was to be another story.

Sunday night was a time for watching and rapping. Gone were the “gay power” chants of Saturday, but not the new and open brand of exhibitionism. Steps, curbs, and the park provided props for what amounted to the Sunday fag follies as returning stars from the previous night’s performances stopped by to close the show for the weekend.

It was slow going. Around 1 a.m. a non-helmeted version of the TPF arrived and made a controlled and very cool sweep of the area, getting everyone moving and out of the park. That put a damper on posing and primping, and as the last buses were leaving Jerseyward, the crowd grew thin. Allen Ginsberg and Taylor Mead walked by to see what was happening and were filled in on the previous evenings’ activities by some of the gay activists. “Gay power! Isn’t that great!” Allen said. “We’re one of the largest minorities in the country — 10 percent, you know. It’s about time we did something to assert ourselves.”

Ginsberg expressed a desire to visit the Stonewall — “You know, I’ve never been in there” — and ambled on down the street, flashing peace signs and helloing the TPF. It was a relief and a kind of joy to see him on the street. He lent an extra umbrella of serenity of the scene with his laughter and quiet commentary on consciousness, “gay power” as a new movement, and the various implications of what had happened. I followed him into the Stonewall, where rock music blared from speakers all around a room that might have come right from a Hollywood set of a gay bar. He was immediately bouncing and dancing wherever he moved.

He left, and I walked east with him. Along the way, he described how things used to be. “You know, the guys there were so beautiful — they’ve lost that wounded look that fags all had 10 years ago.” It was the first time I had heard that crowd described as beautiful.

We reached Cooper Square, and as Ginsberg turned to head toward home, he waved and yelled, “Defend the fairies!” and bounced on across the square. He enjoyed the prospect of “gay power” and is probably working on a manifesto for the movement right now. Watch out. The liberation is under way. 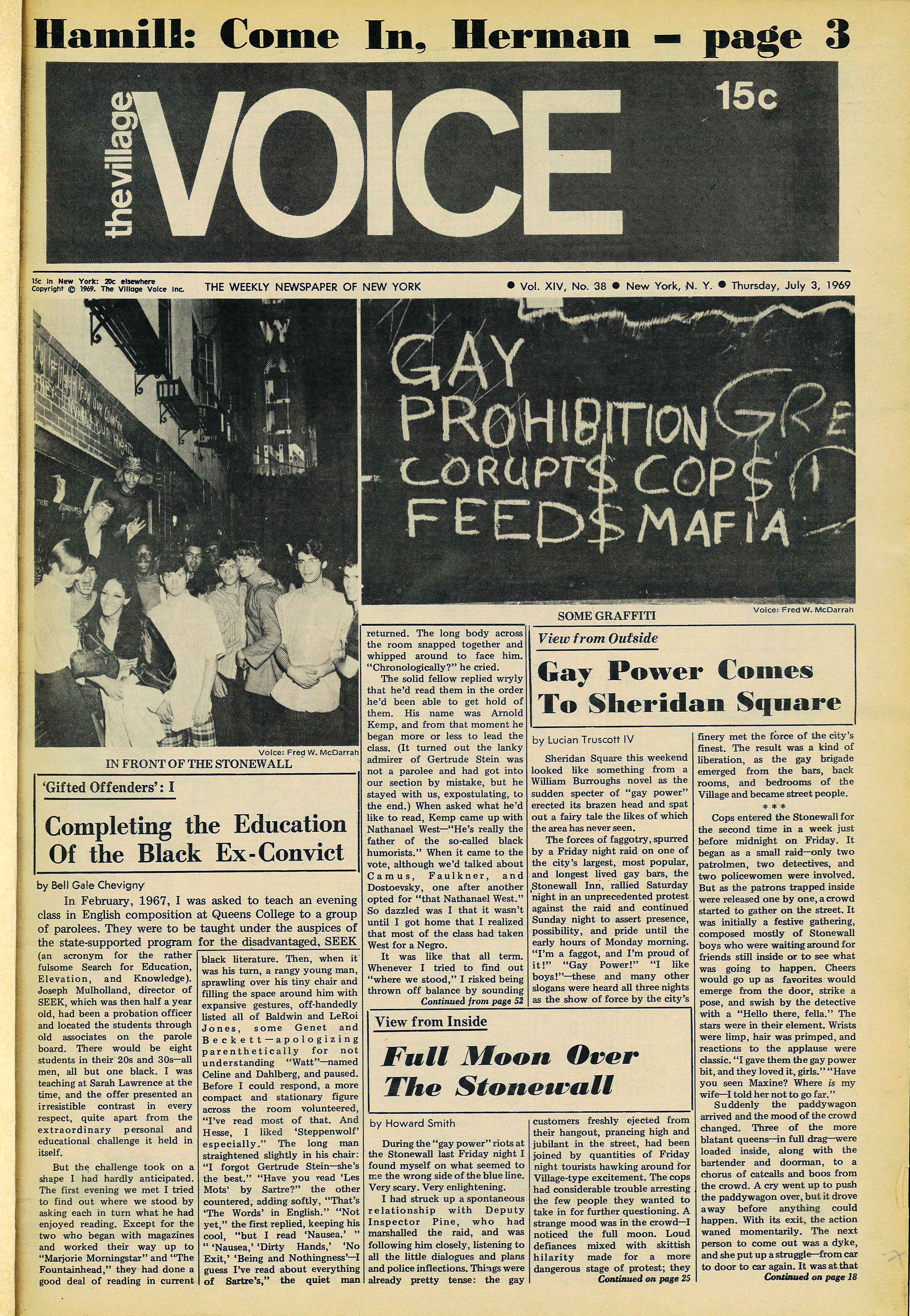 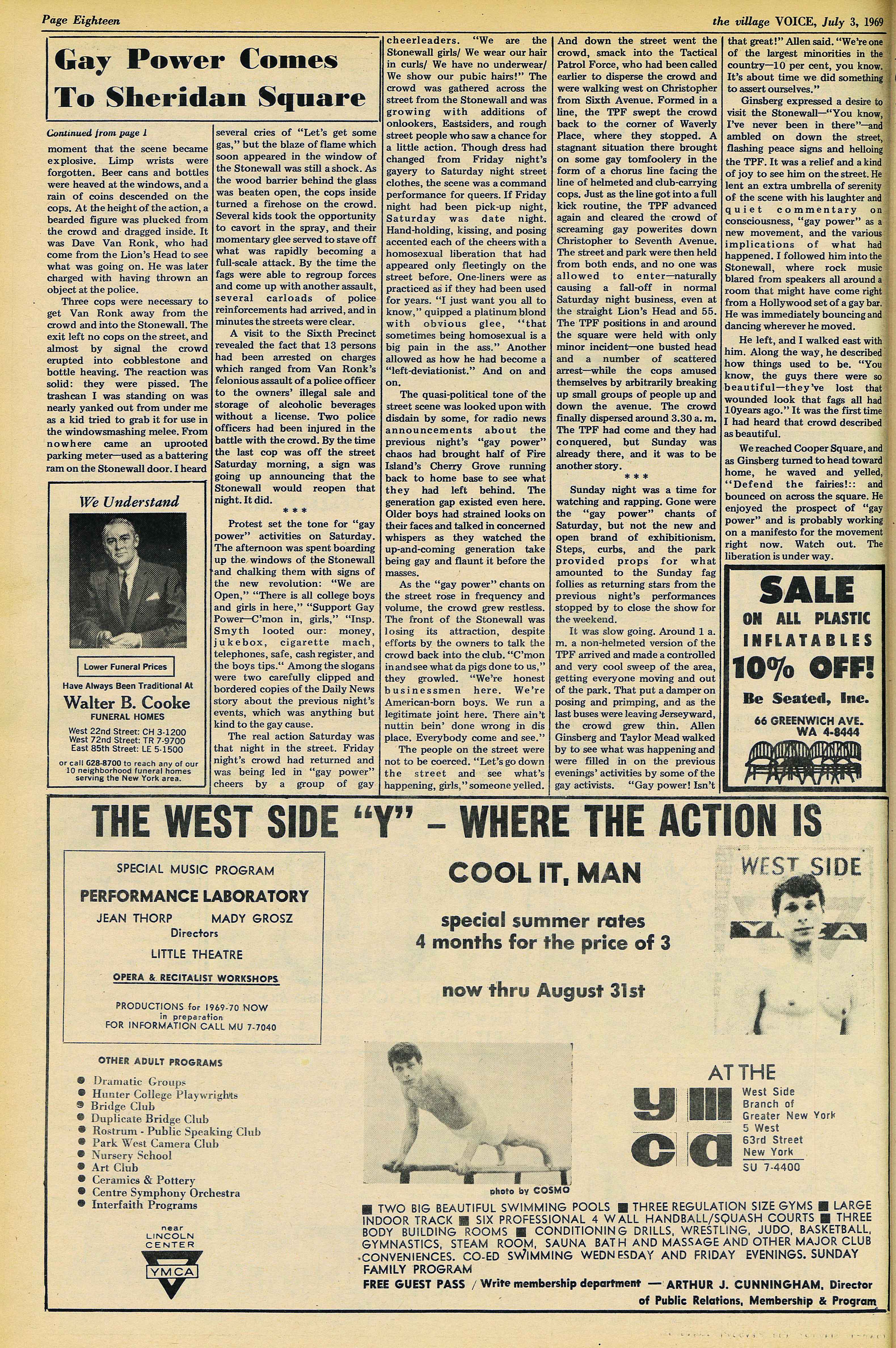